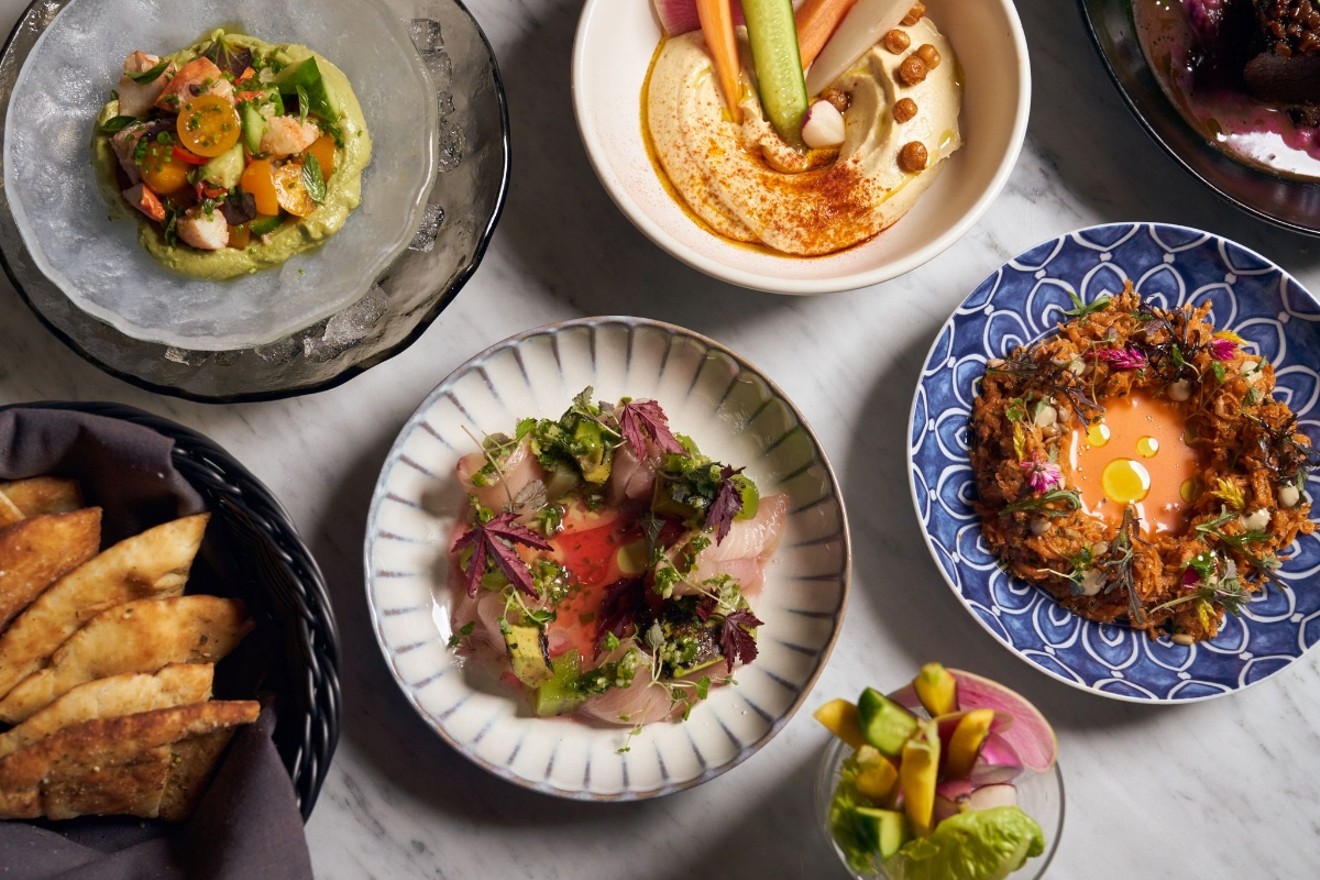 Festive Mediterranean dishes at Aba Photo by Ruben Cabrera
Aba, a Mediterranean restaurant with roots in Chicago, has opened inside the Bal Harbour Shops. The restaurant marks Chicago-based Lettuce Entertain You Restaurants' first foray into the Miami market.

Lettuce Entertain You's executive partner and divisional president Marc Jacobs hopes to bring more than Mediterranean cuisine to Bal Harbour. He hopes to bring the warmth and hospitality the Midwest is known for.

Jacobs tells New Times, "We want to bring the kindness and the feeling that you're in our home."

This is the third Aba for Lettuce Entertain You. In addition to Chicago, there is an Austin location. The restaurant, which gets its name from the Hebrew word for father, takes influences from Israel, Lebanon, Turkey, and Greece with menu items that range from an everything Jerusalem bagel with smoked salmon to a shawarma-spiced skirt steak with black garlic mushroom jus.

Currently, the restaurant is open only for dinner, according to Jacobs, who says the team wants to perfect the evening meal before expanding service. "You only have one chance to make a first impression," he adds.

Jacobs says that the team at Lettuce Entertain You chose Bal Harbour as its first Miami location because the setting is so beautiful. "We were excited by the space. The mall has so much outdoor space, and it works perfectly without concept. At Aba, we want to take people somewhere. It's not just food and drink. We transport you. For us, it's somewhere in the Mediterranean."

To complete the Mediterranean feel, the restaurant group transformed the former Makoto space into a restaurant that feels bright and homey. "The space will give you warm, earth tones, with rustic brick and reclaimed wood," describes Jacobs, who calls the decor "warm refinement." Olive trees and living greenery accent the dining room and outdoor patio, with oversized French doors to bring the outside in on beautiful Miami evenings. An upstairs mezzanine will house an intimate bar where shoppers can refresh with a watermelon gin and tonic or a zero-proof beverage.

Miami has seen many New York restaurateurs hang a shingle in the past two years, but Chicagoans haven't been as plentiful. Jacobs says Lettuce Entertain You is looking to expand its presence in South Florida over time. "We've signed something in West Palm Beach, and we've also signed a deal in Disney Springs," says Jacobs, adding, "We're open to all opportunities. As a partner, I want to get open and see how we do."

Lettuce Entertain You was formed in 1971 by partners Richard Melman and Jerry A. Orzoff. Growing up, both of their mothers were servers in local Chicago restaurants. "They would hear about their moms' days as servers," says Jacobs. Melman and Orzoff created a company whose culture rests on caring about its employees, guests, and service. "I've been with Rich [Melman] for 30 years," says Jacobs. "I grew up in the company. I met my wife in the company. It's my extended family."

With Aba, Jacobs wants Miamians to feel part of that extended family, too. "Miami's culinary scene continues to grow in flavor and creativity, and we look forward to being part of that community."

Aba. At the Bal Harbour Shops, 9700 Collins Ave., Unit 101, Bal Harbour; abarestaurants.com. Open daily 4 to 11 p.m.
KEEP MIAMI NEW TIMES FREE... Since we started Miami New Times, it has been defined as the free, independent voice of Miami, and we'd like to keep it that way. With local media under siege, it's more important than ever for us to rally support behind funding our local journalism. You can help by participating in our "I Support" program, allowing us to keep offering readers access to our incisive coverage of local news, food and culture with no paywalls.
Make a one-time donation today for as little as $1.