Bar Lab's Gabe Orta tells New Times that he and partner Elad Zvi always kicked around the notion of opening a taqueria, but it wasn't until they visited Oaxaca that they knew it was time to make the dream a reality.

"We really got inspired," says Orta, then points out what for him was the icing on the proverbial cake: Chef Alex Chang has moved back to Miami.

Chang had been working with Bar Lab in Los Angeles for years, serving as chef at the Exchange Restaurant at the Freehand Los Angeles Hotel. With L.A. bars and restaurants closed down because of the pandemic, Chang decided to move back to Miami — and Orta and Zvi tapped him to helm the kitchen at their humble little taqueria.

Miami was first introduced to Chang in 2014, at the Vagabond Kitchen & Bar, where his innovative menu introduced Upper Eastsiders to garlic-roasted chapulines and fried quail. At Hoja, Chang uses Mexico City  taquerias as inspiration for his menu, a straightforward and affordable selection of tacos ($4), burritos ($6), and quesadillas ($5) with various fillings. 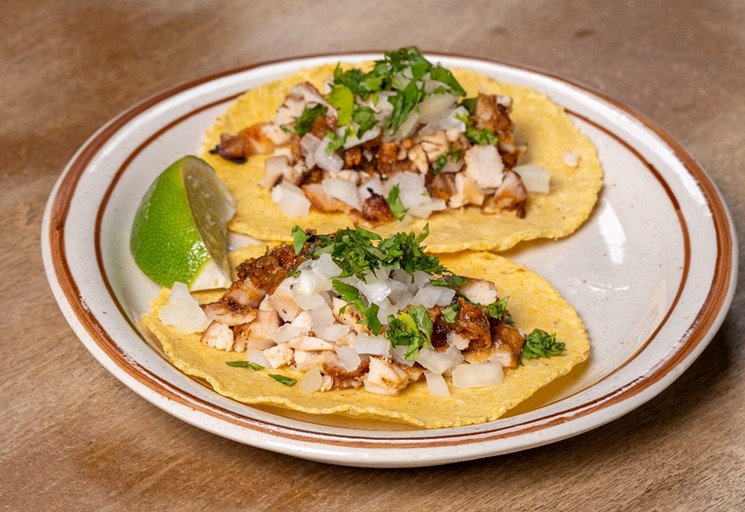 Tacos at Taqueria Hoja
Photo courtesy of Taqueria Hoja/Carma Connected
The tacos will be served on corn tortillas made in-house using meal from corn sourced directly from family-owned farms in the state of Oaxaca in southern Mexico. Orta says corn is the pivotal ingredient that separates good tacos from the pretenders.

"It's like what rice is to sushi. If you don't have quality to start with, it doesn't matter what you do after."

Orta describes the restaurant as "super fast-casual": You place your order, you take a number, you get your tacos, and you go. The Bar Lab partner also wanted to make sure that the prices were affordable.

No Bar Lab project can exist without a good cocktail menu. Bar Lab's Gabriel Orta and Elad Zvi have created a concise menu, influenced by their travels to Mexico. Cocktails are made with wine-based, low-alcohol spirits and include the "El Vato Swizzle," made with grape-based tequila, fresh lime and watermelon juices, and cayenne pepper; and "El Pepino," with grape-based tequila, fresh lime and cucumber juices, and peppercorns. Wine and beer will also be available.

Orta says that at first his team thought that they would need more time to perfect the recipes, but that they had been eating tacos for the past few weeks and were so delighted with Chang's recipes that they decided to do a soft opening earlier than they'd anticipated.

"We wanted to wait, but we did some tastings and the food is so good, we wanted to share it with Miami."

Starting today, you can taste for yourself.

Taqueria Hoja. 19 SE Second Ave., Miami; hojataqueria.com. Open limited hours during soft opening. Check the website for details.
KEEP MIAMI NEW TIMES FREE... Since we started Miami New Times, it has been defined as the free, independent voice of Miami, and we'd like to keep it that way. With local media under siege, it's more important than ever for us to rally support behind funding our local journalism. You can help by participating in our "I Support" program, allowing us to keep offering readers access to our incisive coverage of local news, food and culture with no paywalls.
Make a one-time donation today for as little as $1.