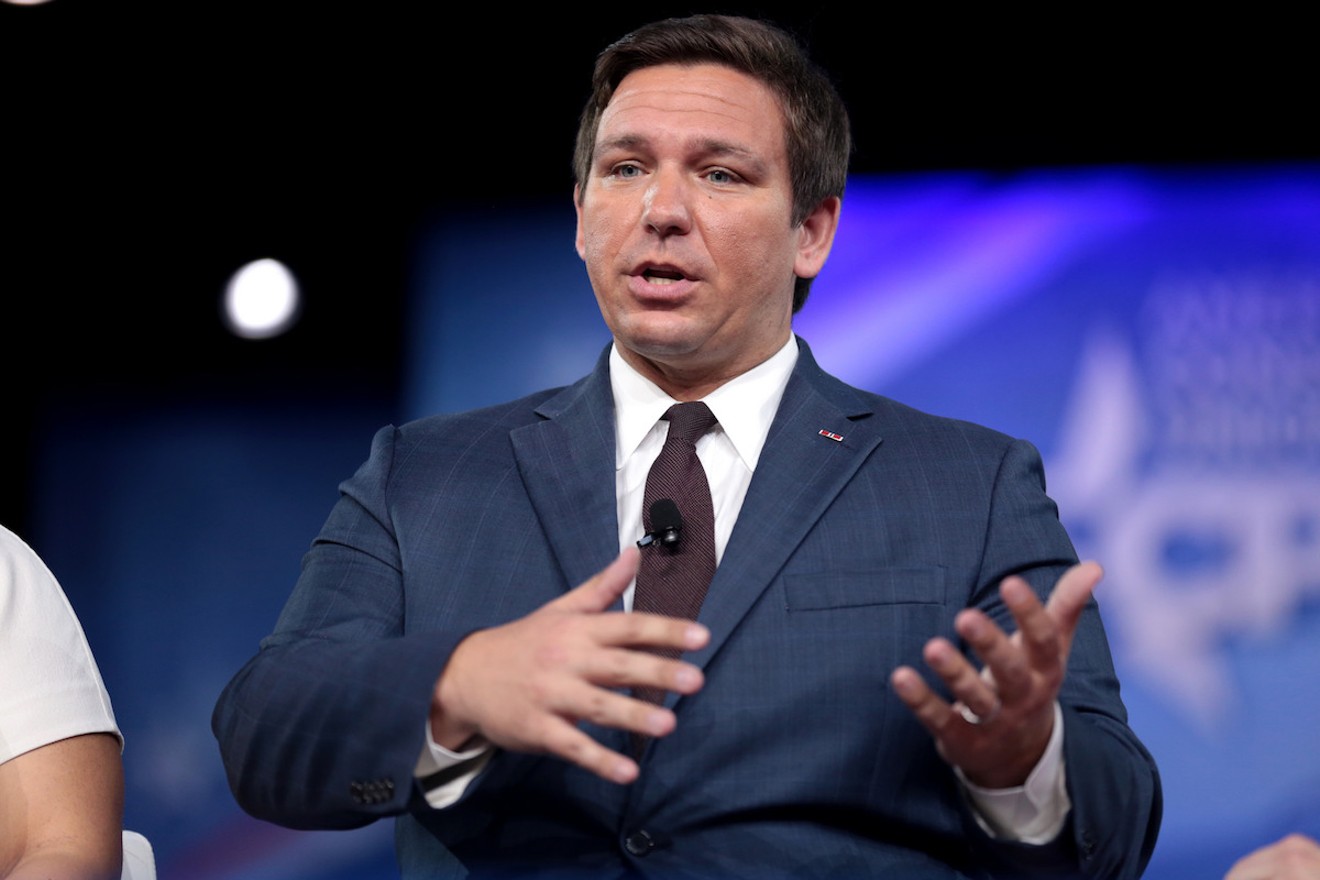 Rep. Ron DeSantis Photo by Gage Skidmore / Flickr
When the Washington Post revealed earlier this month that Ron DeSantis, Florida's #MAGA GOP gubernatorial candidate, had appeared at conferences organized by David Horowitz — a guy who has minimized the impact of slavery in American history and argued there's a "race war" against white people — DeSantis lashed back and insisted he was the victim of a "smear campaign."

Well, now he has an even more troubling speaking engagement to explain away. As first reported by the Florida Center for Investigative Reporting (FCIR) this morning, DeSantis also spoke at a conference organized by ACT for America — a virulently anti-Muslim organization classified as a "hate group" that has repeatedly been associated with neo-Nazis in recent months.

Once again, DeSantis insists there was nothing wrong in addressing the group, whose founder has insisted Muslims “cannot be loyal citizens of the United States.”

But in the audio of DeSantis' Q&A session with the audience at the October 2017 event, the congressman suggests asylum seekers are scamming taxpayers and alleges the Obama administration didn't vet refugees — claims that aren't remotely backed up by evidence.

The newly revealed speech is just the latest time DeSantis has stumbled into a racism scandal, from using the word "monkey" while speaking about his African-American gubernatorial opponent, Andrew Gillum, last month to defending a supporter who asked him to bring back "the hanging tree."

Here's the full audio of his Q&A at the event, via FCIR:


ACT for America has been denounced by groups such as the Southern Poverty Law Center and the Anti-Defamation League, which notes that ACT "propagates the hateful conspiracy theory that Muslims are infiltrating U.S. institutions in order to impose Sharia law" and "stokes irrational fear of Muslims via a number of false claims."

More recently, the group has had a major neo-Nazi problem, as documented by the Huffington Post, with far-right nationalists organizing rallies for the organization and speaking at its events. Last fall, the group was forced to publicly distance itself from Billy Roper, an active neo-Nazi whose wife sells Swastika-embroidered quilts, who had initially received ACT for America's blessing to organize events in Arkansas.

At the October 2017 event, DeSantis leaned into the audience's obvious anti-refugee sentiment with some very dubious claims.

First, he argued that refugees should be allowed into the United States only if they somehow economically benefit America.

"What's the purpose of immigration for the United States? Is it to provide entitlements for foreign nationals? I don't think that," he told the crowd. "The purpose should be to benefit the American people."

DeSantis then claimed that Obama's 2012 Deferred Action for Childhood Arrivals (DACA) program, which aimed to protect undocumented migrants brought to the States as children, sparked the 2014 border crisis that saw a huge upsurge in unaccompanied minors and parents with young children.

"When Obama did DACA and that went into effect, the next summer we saw this massive surge of people coming across with minors, and there were even minors being smuggled across with no adult," DeSantis said. "His policy really incentivized and facilitated more of that to happen."

But there's very little evidence DACA sparked that crisis. Rather, a surge in violence across Central America, coupled with expansions of criminal smuggling networks, is more likely to blame.

Perhaps most outrageous, DeSantis slandered asylum seekers by suggesting many of them were lying about the conditions they fled in their home countries and trying to take advantage of an easy American immigration system.

"You know, I'm supportive of asylum, but it's like you just show up and say 'asylum' without there being any facts and Obama would just say, 'You can stay — it doesn't matter,'" DeSantis said. "That got really out of whack, and you saw the number of people really grow who were claiming that. We need to tighten that up so it's actually people who are being oppressed."

The United States, in fact, has a stringent immigration court where asylum seekers must prove their cases to be allowed to stay. Obama did make it easier for those with "credible fear" of persecution back home to receive asylum hearings, but the increase in asylum seekers under his watch was mostly driven by chaos in Central America.

In fact, as PolitiFact noted last year, it's extremely difficult to obtain asylum. In fact, more than 97 percent of those who made their cases without attorneys were denied asylum under Obama, and even those with attorneys won the right to stay only 32 percent of the time.

But the context of DeSantis' speech is arguably even more important than his dubious claims to the crowd. He made his spurious anti-refugee claims to an audience gathered by a group that has made its name by stoking anti-refugee fears.

As the Anti-Defamation League notes, ACT for America has time and again been caught spreading false and "hateful propaganda" about immigrants, especially Muslims. The group's founder has falsely claimed "25 percent of all Muslims support a radical form of Islam" that backs suicide bombings and organized events that have drawn "anti-government extremists."
KEEP MIAMI NEW TIMES FREE... Since we started Miami New Times, it has been defined as the free, independent voice of Miami, and we'd like to keep it that way. With local media under siege, it's more important than ever for us to rally support behind funding our local journalism. You can help by participating in our "I Support" program, allowing us to keep offering readers access to our incisive coverage of local news, food and culture with no paywalls.
Make a one-time donation today for as little as $1.