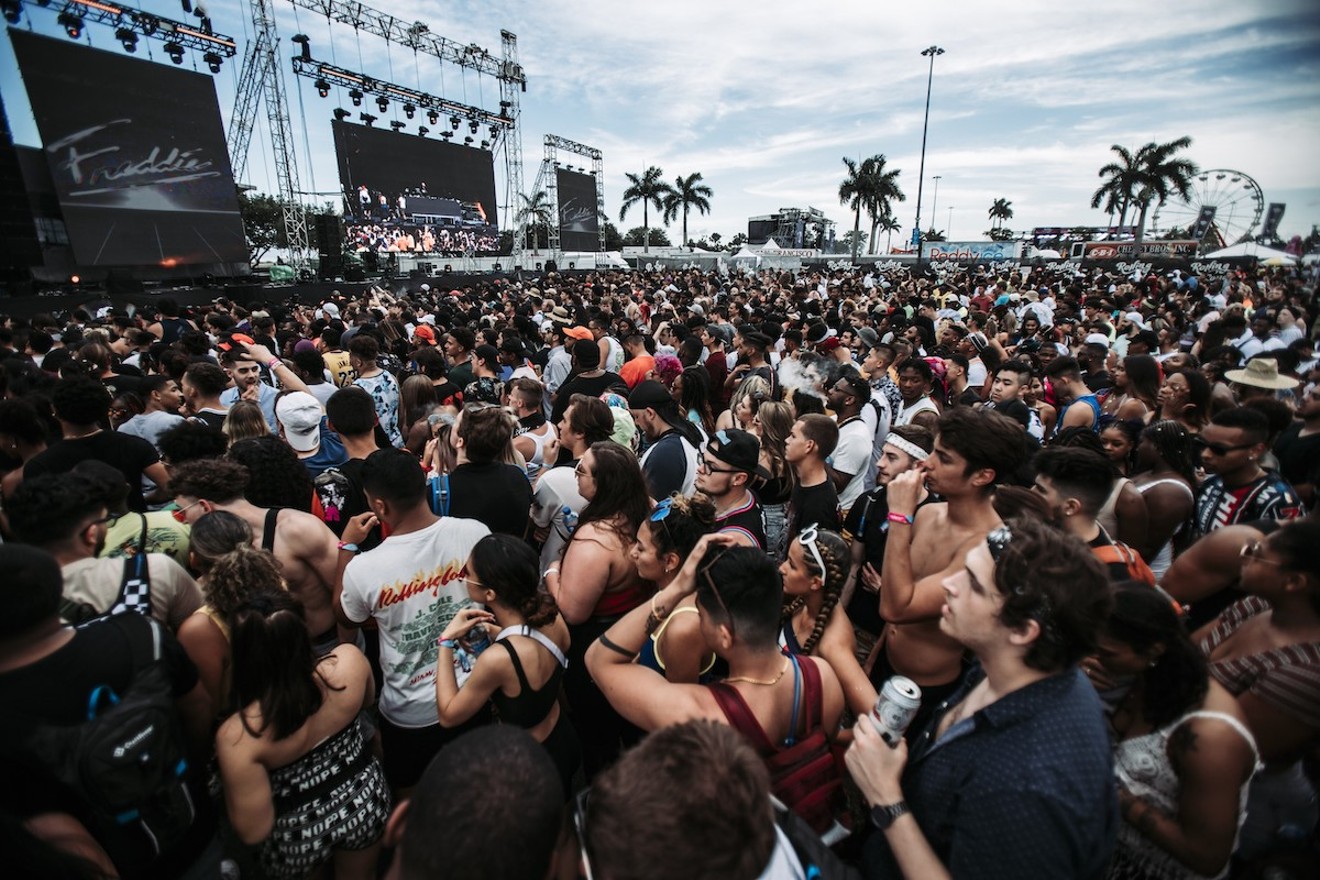 Marchelle Ashey Love — a Miami resident and mother of one — says she's still reeling from injuries she sustained during a crowd panic at the 2019 Rolling Loud at Hard Rock Stadium. She says she had to undergo multiple surgeries after her leg was shattered in a stampede the second day of the concert. Love says the injuries put her out of work for months.

In early February, she filed a lawsuit against Rolling Loud Fest and two companies associated with it: Dope Enterprise and TCMZ LLC.

"People were in fear for their lives," her attorney, Raymond Dieppa, tells New Times.

A lack of clearly marked exits made the panic worse, he claims.

"This was unfortunate and very avoidable. It's like a building when it catches on fire — you need to have a good plan for getting people out," Dieppa says. "It was a massive festival. We feel the security and the crowd control was substandard."

Rolling Loud's organizers did not respond to New Times' multiple calls and emails seeking comment. But the festival says on its website that it works "closely with the police and fire department to make sure things go smoothly."

The May 11 incident in which Love says she was injured wasn't the stampede that dominated headlines. The previous night, around the time of Cardi B's headlining set, panic erupted as false reports of a shooting spread throughout the crowd. Attendees hopped fences to avoid being trampled. Police swarmed in to investigate while injured fans stumbled around in bloody clothes.

In another lawsuit, filed this past January, plaintiff Loren Lampley claims she was among the many people hurt during that first-day stampede. She blames the fiasco on fireworks that were set off near the stage, which she says were mistaken for gunshots. Other attendees have linked the panic to a brawl that broke out in the middle of the crowd.

Rolling Loud's managers continued with the concert and allowed the attendees who had fled the venue to return. Fans noted that during the mayhem, the festival had tweeted, "It's lit!" Organizers soon realized the bad optics and removed the tweet.

Love's lawsuit says the festival failed to shore up security and adjust its crowd control plan after the stampede the first day. She claims "gunshots or a false report of a shooter" may have contributed to the second-night panic as well.

The cases appear to be the first lawsuits to flow into Miami courts over the stampedes. Thankfully, no one suffered fatal injuries, and the incidents didn't rise to the level of tragedy seen at historically disastrous concerts such as the 2010 Love Parade in Germany, where overcrowding led to countless crush injuries and 21 deaths. More recently, last August, at least five people were killed in an apparent stampede at a rap concert in Algiers.

A study published in the Lancet says, generally, two kinds of human stampedes exist: one where a panic spreads, triggering a flight to safety, and another where a crowd rushes toward something desired, such as food rations. Panic-based stampedes are obviously more difficult to predict. And concertgoers are bound to be more on-edge and ready to dart since the 2017 Las Vegas concert massacre and other recent mass shootings at public gatherings.

Rolling Loud seems to have had a smoother run in years past. In 2017, when the festival took place at Bayfront Park, a spokesperson for the Miami Police Department told the Miami Herald that the department was content with the crowd control measures and that the number of arrests was in line with those at other concerts of similar scale.

In the same Herald report, Rolling Loud festival founder Tariq Cherif said the most important concern "is looking out for the fans."

"I'm proud to say that we did just that with the help of police and fire and security," Cherif said.

Rolling Loud 2020, which is scheduled to take place May 8 through 10, will include headliners A$AP Rocky, Travis Scott, and Post Malone. The festival was spawned in Miami but has since expanded across the United States and into Europe, where a sold-out concert is slated for July in Portugal.
KEEP MIAMI NEW TIMES FREE... Since we started Miami New Times, it has been defined as the free, independent voice of Miami, and we'd like to keep it that way. With local media under siege, it's more important than ever for us to rally support behind funding our local journalism. You can help by participating in our "I Support" program, allowing us to keep offering readers access to our incisive coverage of local news, food and culture with no paywalls.
Make a one-time donation today for as little as $1.
Izzy Kapnick is a freelance writer for Miami New Times, covering environmental law, white-collar crime, and the healthcare industry. He has worked as a legal news reporter in South Florida since 2008.
Contact: Izzy Kapnick