Some attendees were experienced filmmakers whose movies have won awards at the Miami Film Festival. Some were aspiring artists who dream of seeing their works on the venue's silver screens. Still, others were longtime residents of Little Havana who remember arriving in Miami from Cuba in the 1960s and watching pictures at the Tower Theater to learn about American culture.

Each of the protesters came together with a unifying mission: to "save the tower" following the City of Miami's decision to oust Miami Dade College (MDC) as operator of the historic theater, a post the college has held for the past two decades.

"This is the theater of the community. I've been coming here since I was 9 years old," Ana Roca, professor emerita of Spanish and linguistics at Florida International University, tells New Times. "Miami Dade College has done an excellent job running it, and we need to preserve our Little Havana landmarks."

The city notified MDC in a letter last month that it was terminating the college's management agreement on the property and taking over once the contract expires on January 2. At a press conference on Monday at Miami City Hall, City Commissioner Joe Carollo, whose district includes Little Havana and Calle Ocho, said the city wants to expand the services provided at the Tower Theater to include art exhibitions and Spanish-language films. 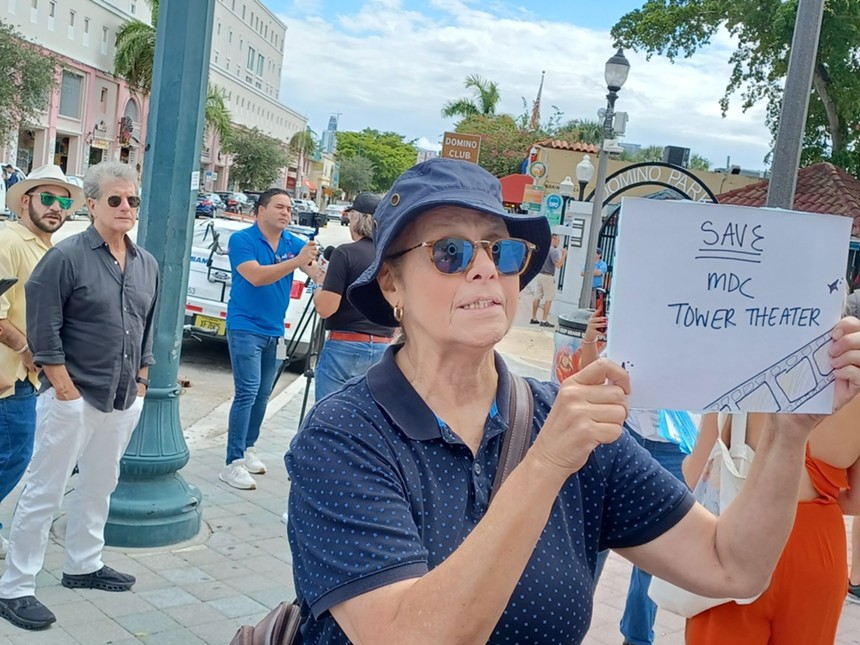 Ana Roca, a language professor at Florida International University, says the city is "crazy" for trying to take over the Tower Theater.
Photo by Joshua Ceballos
"I wanna thank Miami Dade College for the years that it managed the Tower Theater, but as with everything else in life, everything changes," Carollo said during the conference. "The city administration has been of the belief that the use of the Tower Theater is nowhere near its maximum use."

Several observers pointed out that under the college’s management, the theater already has the kind of programming to which Carollo alluded. The college currently hosts an exhibit by Cuban-American visual artist Daniel Marin until October 12. The theater also features films in a variety of languages, including Argentina 1985 by director Santiago Mitre, which is airing right now at the theater in Spanish with English subtitles.

Carollo also said that the city plans to turn the Tower Theater into a visitors center — though one already exists just a few feet west at Domino Park — where tourists can browse tours and pick up pamphlets that outline places to visit in Miami and Little Havana.

"Joe said he wants to do a tourism center here and charge people to come in and see commercials for things to do around the city. That doesn't make sense. YouTube already exists," says local filmmaker Chris Molina, who started an online petition for the theater that has garnered more than 6,000 signatures.

Representatives from MDC did not attend Tuesday's protest. Following the city's press conference, the college put out a statement saying they appreciated Carollo's ideas for the theater and were willing to implement them. 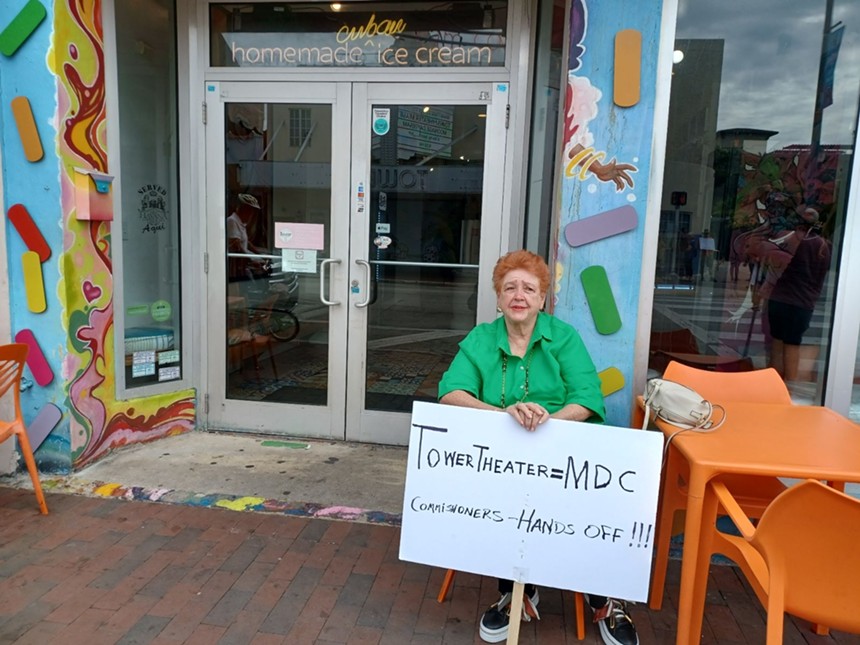 Margarita Vatlle sits outside Azucar ice cream shop on Calle Ocho, holding a sign that reads "Tower Theater = MDC. Commissioners— Hands Off"
Photo by Joshua Ceballos
"There is no need to change management; Miami Dade College can implement many of his excellent ideas in as little as 30 days - much sooner than a change in management. We would be eager to create a welcome center, continued year-round programming and community art exhibits in our second-floor mezzanine," the college wrote.

The institution went so far as to invite the commissioner to be the founding chairman of a Tower Theater community advisory board.

"With [Carollo's] leadership and our 20 years of experience building an iconic cultural institution in Little Havana, there is no question that the Tower Theater's brightest future can be realized with the ongoing administration support of Miami Dade College," MDC stated.

Protesters at the theater were not as cordial.

"It's unfathomable that a city commission with so much else to do would bother taking over such an established institution just on a whim. They don't know anything about culture," protester Margarita Vatlle told New Times.
KEEP MIAMI NEW TIMES FREE... Since we started Miami New Times, it has been defined as the free, independent voice of Miami, and we'd like to keep it that way. With local media under siege, it's more important than ever for us to rally support behind funding our local journalism. You can help by participating in our "I Support" program, allowing us to keep offering readers access to our incisive coverage of local news, food and culture with no paywalls.
Make a one-time donation today for as little as $1.