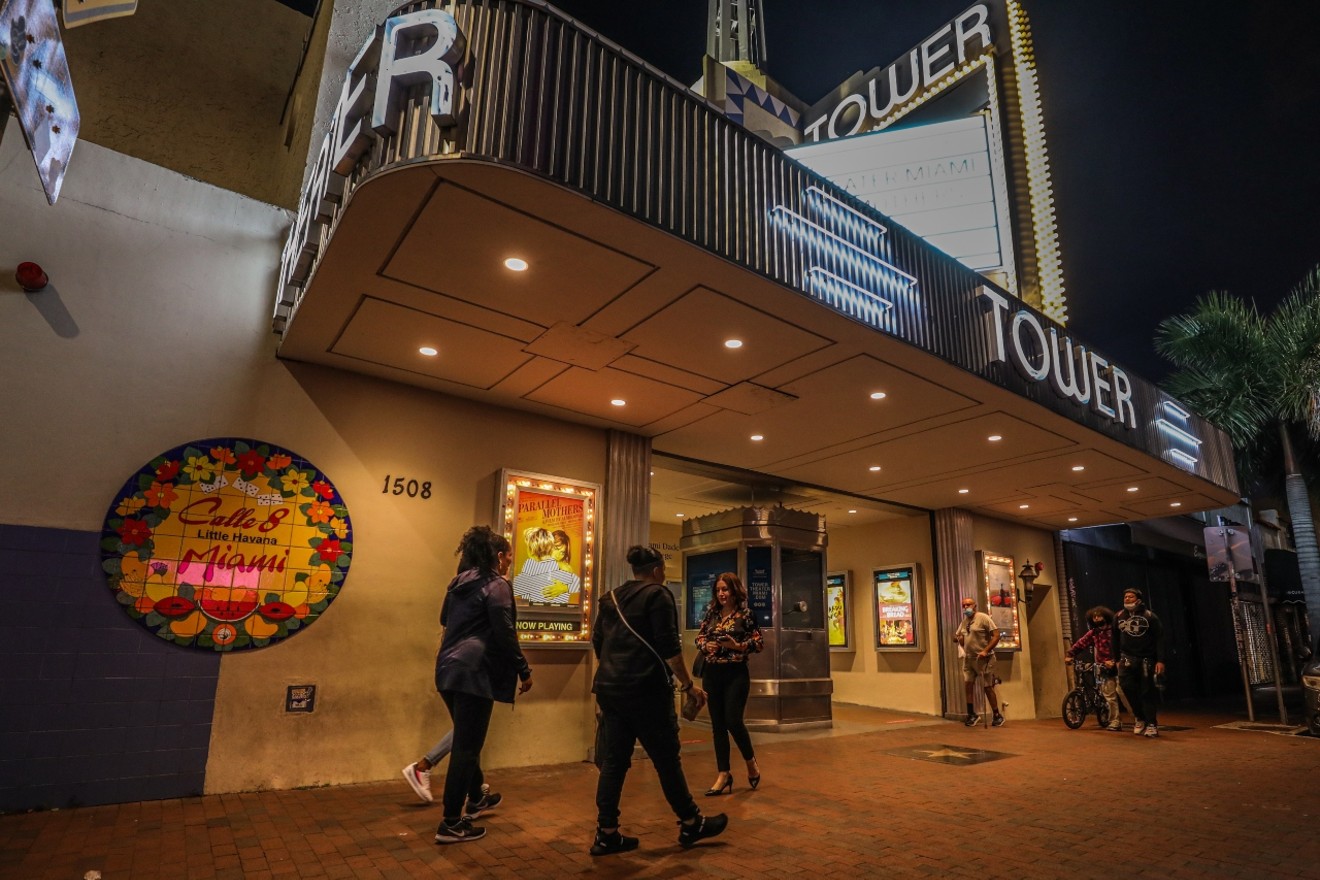 The historic Tower Theater first opened its doors in 1926. For the past 20 years, Miami Dade College has operated the art-house cinema, but that may not be the case for long. Photo courtesy of Miami Dade College
Update published 6:30 p.m. 9/27/2022: After New Times published this story, South Florida filmmaker Chris Molina created an online petition titled "SAVE TOWER THEATER!"

The petition is addressed to City of Miami commissioners, Mayor Francis Suarez, and a bevy of city administration officials. It asks that the city keep the Tower Theater in the hands of Miami Dade College. The petition garnered more than 650 signatures within a few hours of posting.

"When this goes through, Miami will lose another cultural landmark, something we can't afford. Miami residents will lose access to Spanish-language films and other international cinema. Miami will lose a meeting hub for so many of our talented filmmakers who make this city what it is," Molina writes

After 20 years of supporting art-house cinema and performance at the Tower Theater on Calle Ocho, Miami Dade College will no longer operate the historic venue.

The City of Miami sent Miami Dade College (MDC) a notice last week that the college's management contract for the Tower Theater will be terminated as of January 2, 2023.

"The City would like to provide the College with prior written notice of termination to ensure a smooth transition for the College," reads the September 19 letter, signed by Jacqueline Lorenzo, interim director of the city's Department of Real Estate and Asset Management (DREAM). "We thank you for your services in managing the Property for the past few years."

The termination notice (attached at the end of this article) does not provide a reason for dissolving the city's arrangement with the college.

Reached by New Times on Monday, an MDC spokesperson explained that the college had a five-year lease on the property beginning in 2016 and had the option to renew for five more years after supplying the city with certain documentation. The college had been in talks with the city for the past 20 months to process the lease renewal but communications broke down, and despite the college's intent to stay onboard as the theater's manager, the lease was terminated, according to the college.

"It's unfortunate that the city has terminated our lease. We've been good stewards of this important community asset for 20 years," the MDC spokesperson said. "At the end of the day, it’s a city building, and the city can choose what they do with their buildings."

The termination came just three days before a City of Miami commission meeting with two resolutions on the agenda, aimed at handing control over the Tower Theater and its adjacent parking lot to the Bay of Pigs Veterans Association, Brigade 2506, so they could "better manage" the property, as one of the resolutions phrased it.

The resolutions were sponsored by Commissioner Joe Carollo, who had purportedly pushed the veterans association to take over the property. The measures included a plan to build affordable housing on the property along with a museum commemorating the attempted Bay of Pigs invasion of Cuba in 1961.

Rafael Montalvo, president of Brigade 2506, tells New Times that his group was interested in the parking lot behind the theater as a site for the planned museum, but that they wanted nothing to do with the theater itself.

The resolutions were withdrawn from the September 22 agenda by Miami City Manager Arthur Noriega during the commission meeting. The city nonetheless persisted in dissolving its management arrangement withe Miami Dade College

MDC has operated the 1920s-era Tower Theater since 2002, when the college reopened the venue and revitalized it into a cultural landmark for the Little Havana community. The theater is home to the fall season GEMS Film Festival, hosted by the Miami Film Festival, which is set to take place from November 3 to November 6.

MDC says it will continue to provide its scheduled programming and shows until it is no longer the manager of the building come January.

Asked if the college would try to obtain a new lease on the property, the spokesperson expressed uncertainty about what the process would be to do so, but that the college is in communication with city officials.

"Miami Dade College has every interest in continuing to operate the Tower Theater in the capacity we do today," the spokesperson says.

The City of Miami released a statement to New Times, confirming that the college's management contract comes to an end in January 2023. The city said it "will take control over managing and operating the Tower Theater into the foreseeable future."