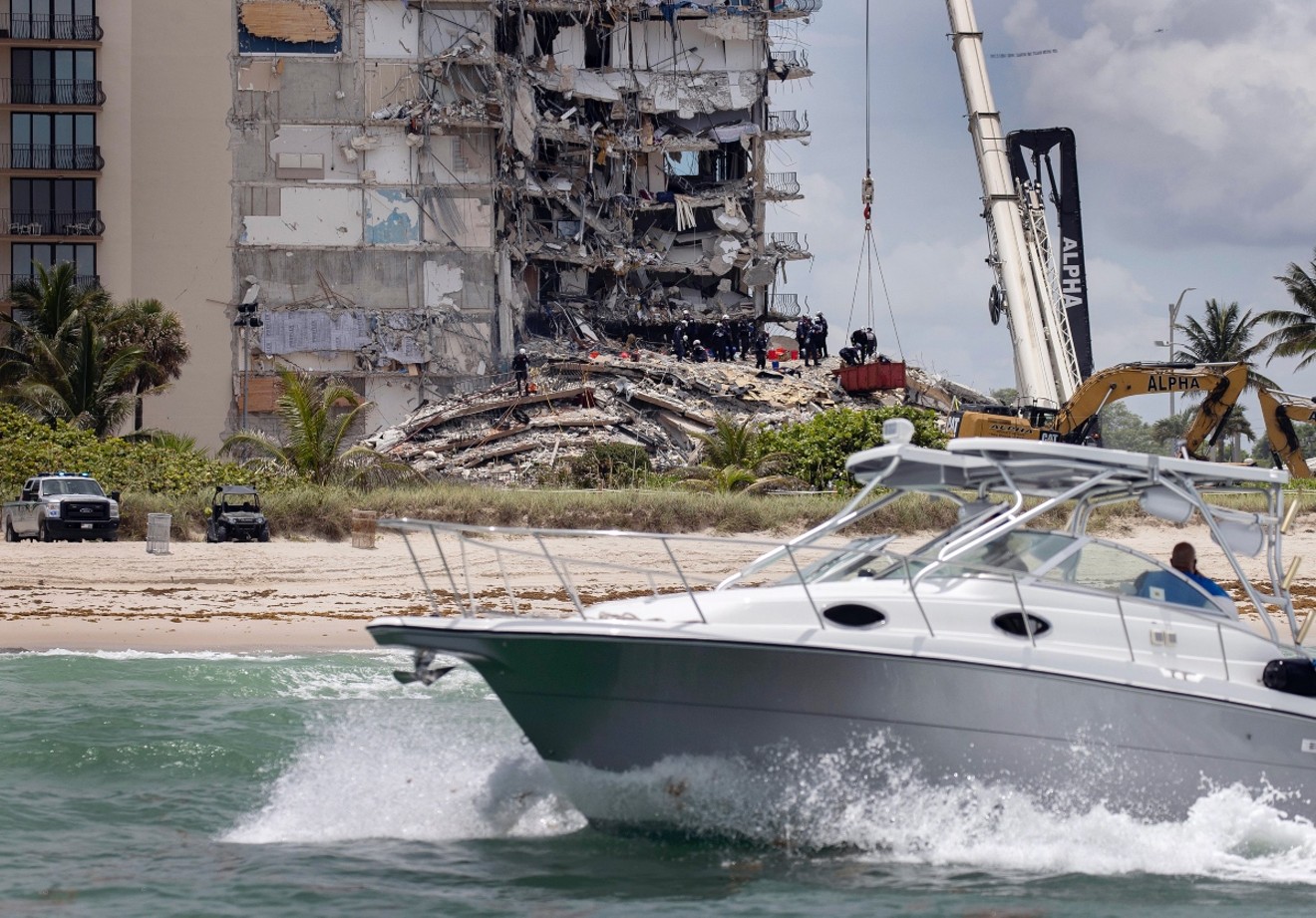 A boat passes off shore as members of the South Florida Urban Search and Rescue team look for possible survivors. Photo by Joe Raedle/Getty
The giant pile of debris in Surfside rises more than two stories above the earth and has proven to be a huge challenge for teams searching for victims of the Champlain Towers South building collapse.

But that's only what can be seen. Officials believe there is nearly as much of the building below ground level.

Miami-Dade Assistant Fire Chief Ray Jadallah said Wednesday that it's suspected that roughly six floors of the building — about half of it — are crushed under the ground in the parking garage area built beneath the building.

"I had my structural engineers, I had my men and women, really try to give me at least an estimate," Jadallah told loved ones of collapse victims at the family reunification center this morning. "This is just based on the evidence they have, nothing more than a very calculated opinion: There's 12 floors — they feel that [six to seven of the 12 floors] are above ground level. All the other floors are below ground level."

The revelation illuminates the true enormity of the task before the search teams, which have been severely hampered during the now-weeklong mission by fire, rain, and concerns that the remaining portion of the building may collapse.

Jadallah has repeatedly told the families that the search, often with cameras, for all-important "void spaces" in the rubble — open areas in the pile large enough for a person to survive inside — has been largely fruitless. He said Wednesday morning that the best hope is in an area where a stairwell used to be.

"We've been trying to pull that staircase area since day two," he told loved ones. "That's the area that had the highest mound in regards to the debris pile."

Despite such dire indications, some continue to hold out hope. Surfside Mayor Charles Burkett spurred on the expectations of a "miracle" at a press conference Tuesday when he told families that dramatic rescues had been made after a week in other cases of collapse.

"There were several different incidences, but most notable was the one from May 2013 where a woman was pulled from the ruins of a factory in Bangladesh 17 days after it collapsed," Burkett said at a press conference. "So I think as the governor said earlier, and the lieutenant governor, nobody is giving up hope here...We're dedicated to get everyone out of that pile of rubble and reunite them with their families."

Burkett failed to mention that the woman who was rescued in Bangladesh was in a room that had only partially collapsed and had access not only to a pool of water but also to food she was able to recover from the knapsacks of colleagues who had died.

While politicians have voiced optimism, experts and professionals inside the family reunification center have been more cautious. When Miami-Dade Fire and Rescue medical director Dr. Marc Grossman addressed the families Tuesday, he told them that it was possible to survive for more than a week under rubble, but only under the "best circumstances," with access to water and food, a possibility that is extremely unlikely in the Champlain Towers South collapse.

The increasing desperation of the families has been reflected in their questions for officials in recent days. Two family members on Tuesday asked Grossman if it was possible that those under the rubble might enter an "unconscious state" that would allow them to survive. The physician told them that such unconsciousness would likely be caused by a head injury that would reduce their chance for survival.

"You wouldn't automatically go into...a sleep state or a hibernation or something like that to preserve your body function," Grossman said. "I think it would be the opposite, where you would try to get out and your adrenaline would increase. So I would say no."

It appeared to be another follow-through of the promise made by Jadallah to family members at the beginning: That officials would share the truth with loved ones, no matter how bad it may be.
KEEP MIAMI NEW TIMES FREE... Since we started Miami New Times, it has been defined as the free, independent voice of Miami, and we'd like to keep it that way. With local media under siege, it's more important than ever for us to rally support behind funding our local journalism. You can help by participating in our "I Support" program, allowing us to keep offering readers access to our incisive coverage of local news, food and culture with no paywalls.
Make a one-time donation today for as little as $1.
Journalist Bob Norman has been raking the muck of South Florida for the past 25 years. His work has led to criminal cases against corrupt politicians, the ouster of bad judges from the bench, and has garnered dozens of state, regional, and national awards.
Contact: Bob Norman