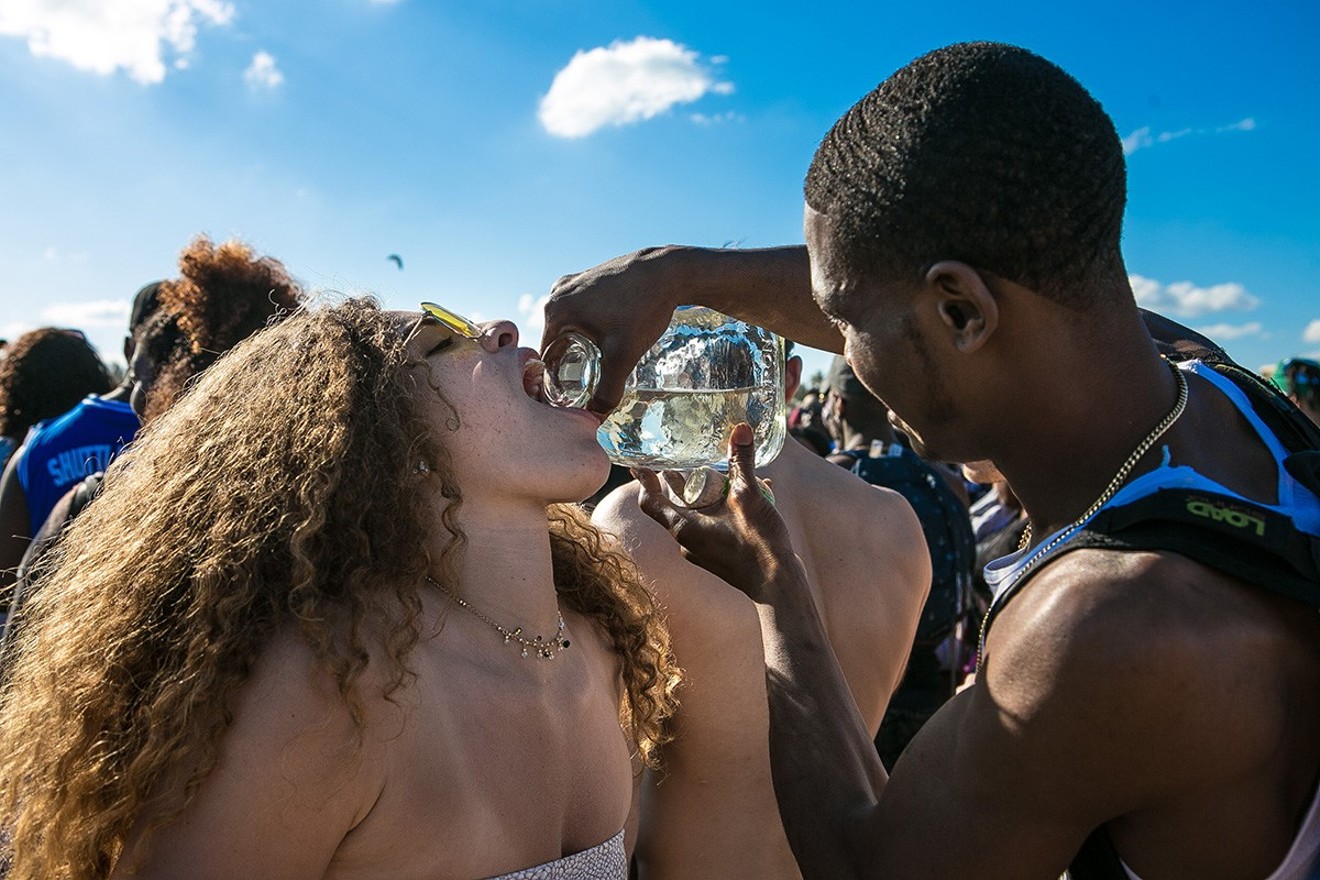 Spring break 2018 in South Beach. Photo by George Martinez
Each year, spring break brings hundreds of thousands of visitors to Miami Beach — but those tourism dollars come with a cost. Drunk bros throw punches, twerkers stop traffic for miles, and sometimes a random stampede breaks out, sending South Beach into chaos. Last year, there were so many people in the city that officials closed the MacArthur Causeway for an hour and refused to let anyone else in.

But spring break 2019 could be different. Miami Beach Police Chief Daniel Oates began sending letters last month to college administrators and fraternity and sorority presidents warning that spring breakers will be arrested for excessive partying and drug use.

"Miami Beach has been challenged in recent years by student misbehavior during Spring Break — to the point that our police department must now take a harder line going forward," the letters say. "I am writing to ask that you assist Miami Beach in sharing with your students the following message from our police department: 'If you come to Miami Beach for spring break, you must obey our laws. If you do not, you will be arrested.'”

The letters were first reported by Susan Askew of the RE blog. While Oates states that "we will always encourage college and university students to enjoy Miami Beach," the message suggests the city has reached its breaking point. According to Oates, spring break crowds have grown larger each year, with as many as 5,000 people on the beach at a time.

In recent years, Miami Beach has been one of the trashiest spring break cities and has produced some of the country's highest rates of alcohol poisoning. At the same time, it's also one of the most popular destinations for spring breakers.

This year, after one of the rowdiest spring break seasons ever, City Commissioners Kristen Rosen Gonzalez and Ricky Arriola proposed arresting people for marijuana possession, a reversal from the city's stated policy of instead issuing a fine. (And during Urban Beach Week, when black visitors arrive, the city did just that.) Rosen Gonzalez suggested doing "something radical," like blasting classical music in an attempt to kill the party.

As of last week, police had sent out 350 letters to colleges and universities across the country, according to a spokesperson. So far, the reception from administrators has been... interesting:

My job is strange sometimes.

If you really don't care what the city says, though, sign up for spring break at a place that calls itself the official "site for Miami party/event tickets," and if your school is listed as one of those on the official list, which pegs March 4 to 24 for events.
KEEP MIAMI NEW TIMES FREE... Since we started Miami New Times, it has been defined as the free, independent voice of Miami, and we'd like to keep it that way. With local media under siege, it's more important than ever for us to rally support behind funding our local journalism. You can help by participating in our "I Support" program, allowing us to keep offering readers access to our incisive coverage of local news, food and culture with no paywalls.
Make a one-time donation today for as little as $1.