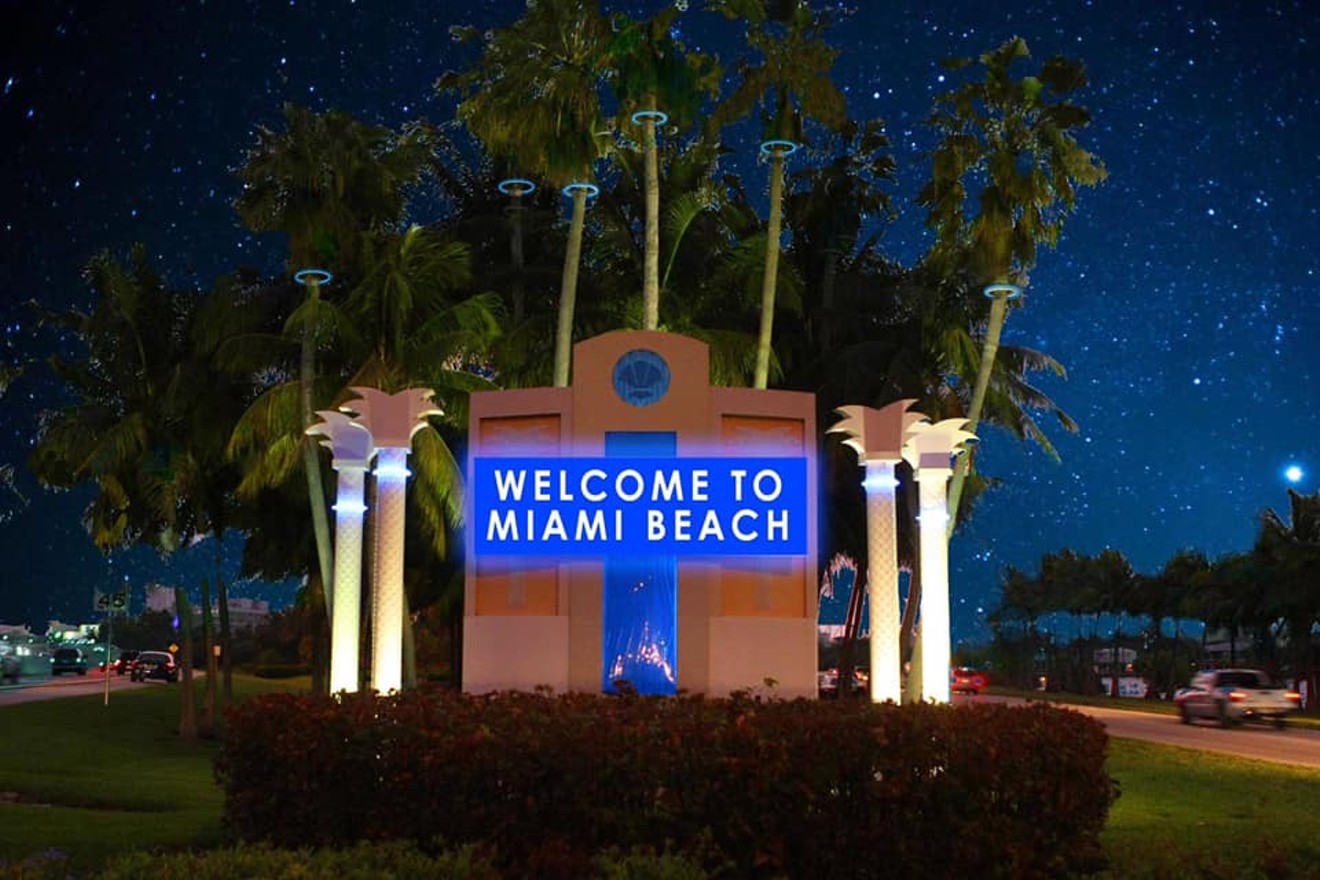 A mockup of a proposed LED sign at the I-195 entrance to Miami Beach. Courtesy of City of Miami Beach
The neon halos that adorn the trunks of the palm trees at Miami Beach's entrance off the Julia Tuttle Causeway have been an iconic city fixture for more than 20 years. Since being updated with LED technology in 2007, the lights change colors to commemorate special holidays or events held on the Beach.

This week, Jim Morrison, the artist and lighting designer responsible for the legendary display, unveiled his latest idea for upgrading the sign — and Miami Beach commissioners kind of hate it.

"I was very candid with you," Commissioner John Alemán told Morrison at Wednesday's city commission meeting. "I don’t like that. I think we can do better."

The proposal by Morrison would overlay a large rectangular LED display board on top of the current "WELCOME TO MIAMI BEACH" lettering. Morrison says the sign would allow the city to change the welcome message for events such as Art Basel or Pride. The LED display could cost as much as $45,000, according to the proposal.

1) The Miami Beach entrance sign currently 2) and as proposed
photos by Jimmy Emerson via FlickrCC, City of Miami Beach
While Alemán was aghast at the design, Commissioner Michael Góngora said he was excited about it, in a lukewarm kind of way. "I'm not so sold on it myself," he said, "but I think that is the wave of the future."

Ultimately, Góngora prevailed on Commissioners Ricky Arriola and Mark Samuelian to tentatively approve it. The LED display proposal will now go to the Design Review Board for consideration.

On Thursday morning, Alemán wrote a Facebook post calling the sign "super ugly" and lamenting the commission's lack of taste. A choir of residents chimed in to agree.

"The only thing that is missing is 'sponsored by,'" one guy wrote.

"Next, they’re adding a strobe light and a smoke machine," another man commented.

Miami Design Preservation League executive director Daniel Ciraldo is another resident who hates the idea of an LED display at the city's entrance. "It looks better suited for a football stadium and not the entrance to our city," he told New Times. "An iconic city like ours for high-quality design should be able to do better than this."

Commissioner Ricky Arriola fought back, saying "No one has a better idea."

"Every comment here says it’s a horrible idea, but no one has an alternative," he wrote on Alemán's post. "This is precisely why nothing gets done."

As of now, the proposal is still in the idea phase. The LED display will next be discussed by the Design Review Board, which meets again on February 5.
KEEP MIAMI NEW TIMES FREE... Since we started Miami New Times, it has been defined as the free, independent voice of Miami, and we'd like to keep it that way. With local media under siege, it's more important than ever for us to rally support behind funding our local journalism. You can help by participating in our "I Support" program, allowing us to keep offering readers access to our incisive coverage of local news, food and culture with no paywalls.
Make a one-time donation today for as little as $1.