Diego, an adult male meerkat at Zoo Miami, has bonded most with the two cubs born in January. Photo by Ron Magill/Zoo Miami
In 2005, millions of TV watchers' hearts melted with the premiere of BBC America's Meerkat Manor and its intimate portrayal of the endearing yet sometimes vicious creatures.

If you want a glimpse of a meerkat mob in real life, you're in luck: Zoo Miami this week announced the birth of two adorable pups, a first for the zoo. You can see them in person or log on to watch the zoo's Meerkat Cam.

Last month, 8-year-old Yam Yam gave birth to the two babies. They haven't been named yet, and their genders are undetermined. Yam Yam lives with three male meerkats, any of which could have fathered the pups. Yam Yam came to the zoo from Busch Gardens in February 2012; the three males came from the Brevard Zoo in June 2018.

Of the three male meerkats — Gizmo, Diego, and Joe — Diego appears most attached to the babies, according to Ron Magill, the zoo's longtime communications director. 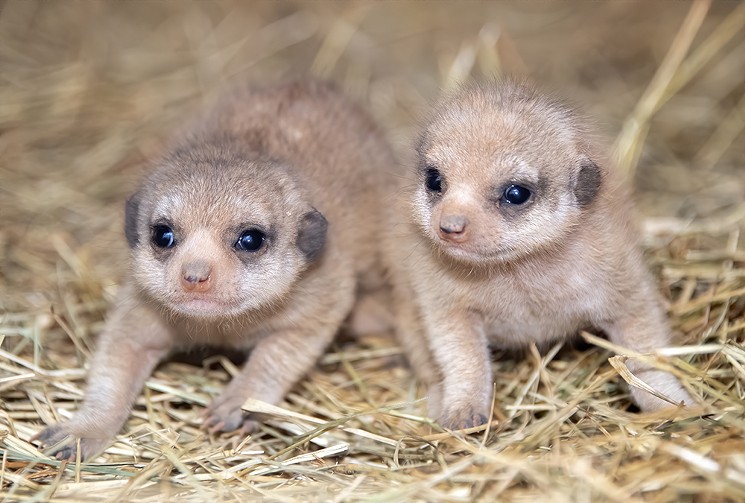 Photos of Diego and the babies show him looking like a proud parent.

"Anybody watching the mob for any period of time would think Diego is the mom," Magill says.  The pups were born blind and opened their eyes for the first time last week. Their mom breastfeeds them, but the babies are beginning to wean and chase crickets and mealworms given to them by zoo staff. The pups haven't left their den much, but Magill says they're becoming adventuresome. They'll poke their little heads out of the den and scurry back inside. Staffers watch them from behind the exhibit.

According to National Geographic, meerkats live in groups that vary in size from three to 50 members. Every member of the mob helps to gather food, keep an eye out for predators, and take care of the young in their desert environments in southern Africa.
click to enlarge 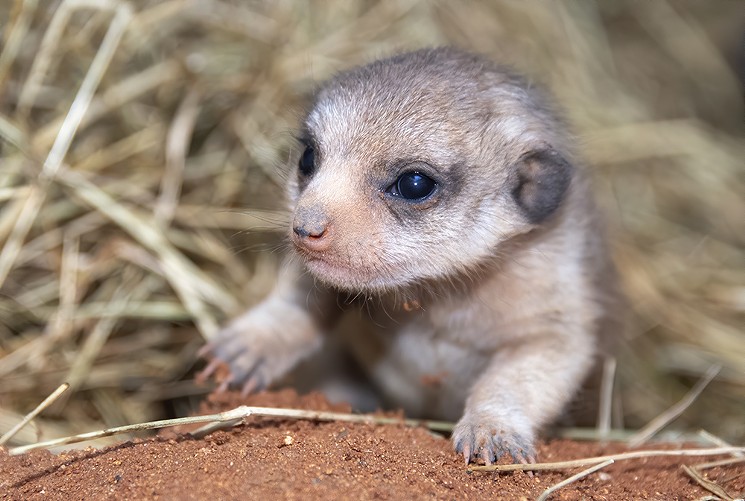 Photo by Ron Magill/Zoo Miami
Meerkats are sometimes photographed standing on their hind legs. Some of them serve as lookouts in their mob, keeping watch for birds of prey and other threats.

Magill photographed one of the pups standing for the first time.

"It looks like he's giving a high-five," he says. "They're starting to exhibit their natural behaviors."
KEEP MIAMI NEW TIMES FREE... Since we started Miami New Times, it has been defined as the free, independent voice of Miami, and we'd like to keep it that way. With local media under siege, it's more important than ever for us to rally support behind funding our local journalism. You can help by participating in our "I Support" program, allowing us to keep offering readers access to our incisive coverage of local news, food and culture with no paywalls.
Make a one-time donation today for as little as $1.