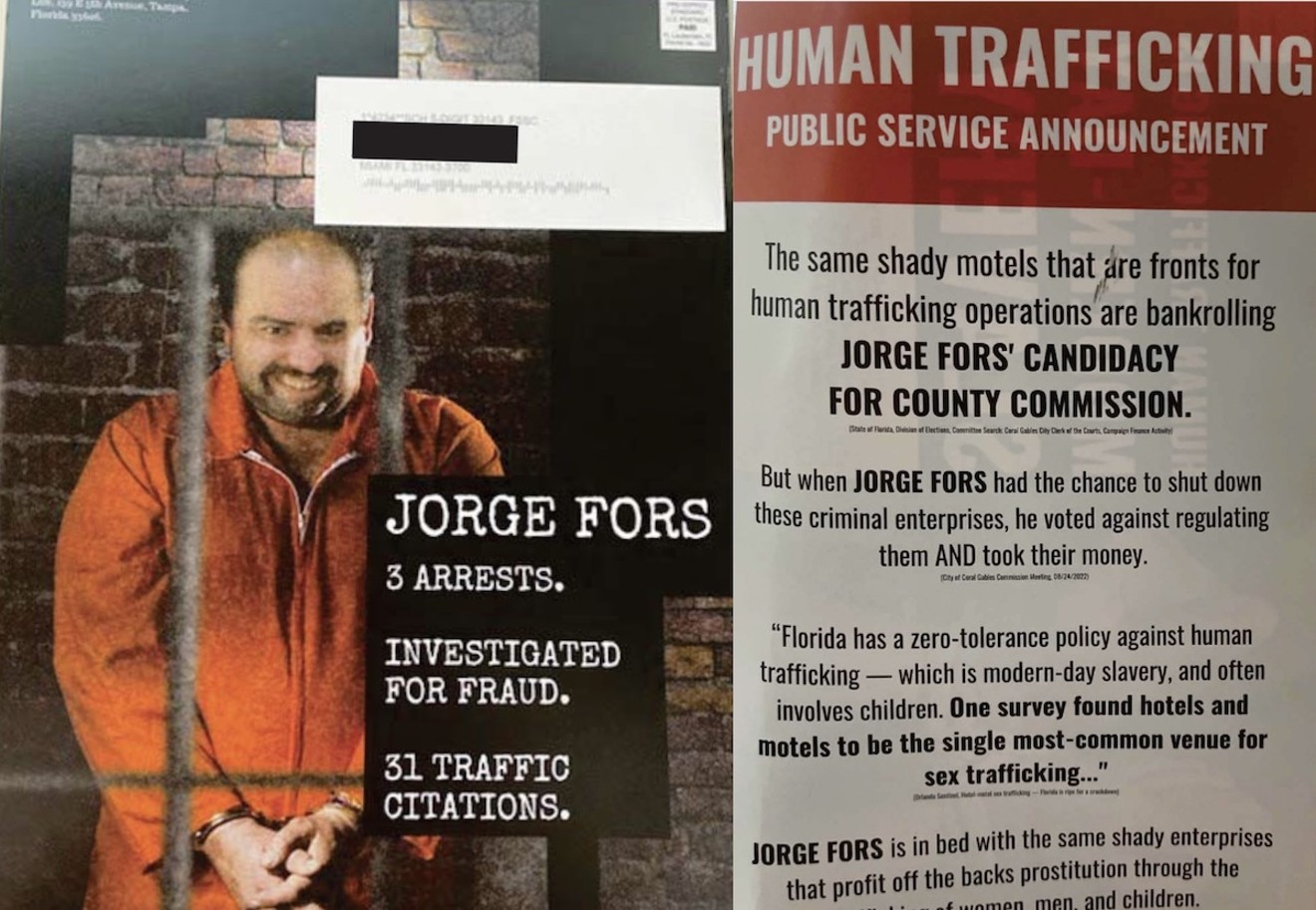 Jorge Fors Jr. is suing his opponent in a Miami-Dade County Commission race over what he describes as a series of defamatory mailers. Photos from court exhibits in Fors Jr. v. Marino Cabrera
Jorge Fors Jr. claims his opponent in the upcoming Miami-Dade County Commission race has gone far beyond the bounds of a typical smear campaign seen in the ramp-up to the November election.

In a September 22 lawsuit, Fors claims rival Kevin Marino Cabrera teamed up with a handful of Florida political operatives to spread blatantly false claims that Fors is bankrolled by sex traffickers. The bogus information about Fors was disseminated via mailers and text messages to thousands of Miami-Dade County voters beginning in May, the lawsuit alleges.

One of the anti-Fors mail ads suggests he is "in bed" with "shady enterprises that profit off the backs [of] prostitution through the trafficking of women, men, and children." Another features a poorly photoshopped picture of him grimacing in an orange prison jumpsuit in jail.
click to enlarge 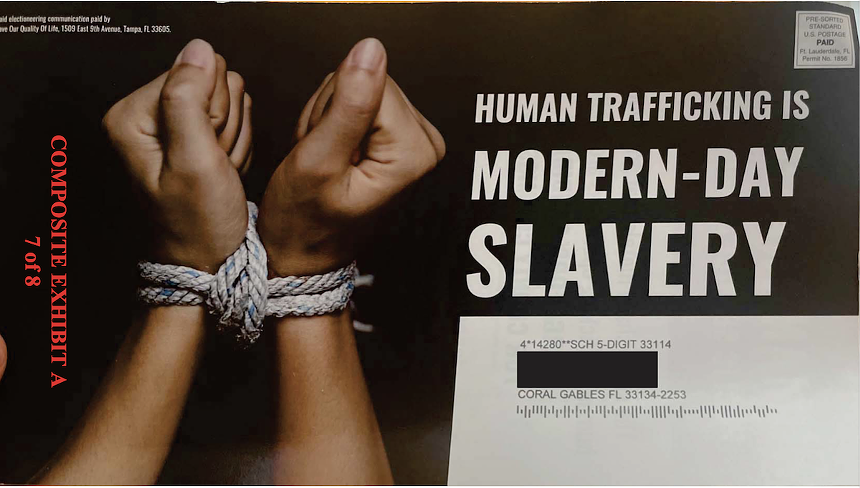 Pedicini, Piccolo, Millner, and Miranda did not immediately respond to New Times' requests for comment. Cabrera says via email that he hasn't been served with the lawsuit yet.

"Upon receiving the lawsuit and reviewing it with counsel we will respond accordingly," Cabrera says.

Michael Beltran, Fors' attorney, tells New Times he wishes people would "stop sending out nasty letters." Beltran says via email, "If they will stop telling lies about my clients, I will stop telling the truth about them."

The lawsuit says the mailers falsely allege Fors "supported, protected, and otherwise facilitated human trafficking and human traffickers" because his campaign took money from seedy motels that are fronts for prostitution rings.

Fors, who serves on the Coral Gables City Commission, maintains he "never received a campaign contribution, or any compensation" from a motel owner or operator. He also disputes the mailers' claims that he "voted against regulating" motels that house prostitution rings. (Last month, Fors voted in favor of requiring hotels and motels to add signage about human trafficking at front desks.)

The political attack ads try to depict Fors as a criminal on account of three cases that he faced, dating back 17 years: a charge for underage drinking in 2003, another for unauthorized possession of a driver's license (also in 2003), and a third for breaking an open container law in 2005. All of the charges were eventually dropped, with the first two marked as a deferred prosecution in Alachua County records.

Cabrera, who describes himself as a public relations executive, was the Florida state director for Donald Trump's 2020 campaign and has been touting the former president's endorsement. He's previously worked as a field director for the conservative group LIBRE Initiative.

The lawsuit demands damages for defamation, claiming the political ads harmed Fors' reputation both as a candidate for county commission and a licensed attorney.

"His livelihood directly depends on the public’s perception of, and trust in, his professionalism, character, trustworthiness, and reputation," the lawsuit reads. (A copy of the complaint is attached at the end of this article.)

According to the court documents, Cabrera is a registered lobbyist in Miami-Dade County. The lawsuit says he joined the far-right group the Proud Boys at a controversial 2018 protest in which attendees hurled profanities at then-House Minority Leader Nancy Pelosi and banged on the door of a Coral Gables building she was visiting.

In the August 23 primary election, Fors received 26 percent of the vote while Cabrera won a 43 percent share in the District 6 race. Because Miami-Dade law requires a county commission candidate to receive more than half the votes cast during the race to win, Fors and Cabrera — both Republicans — are set to compete in a runoff during the November 8 general election. County commission seats are categorized as nonpartisan.

The winner will take over the seat currently occupied by term-limited Commissioner Rebeca Sosa, who has served on the commission since 2001.