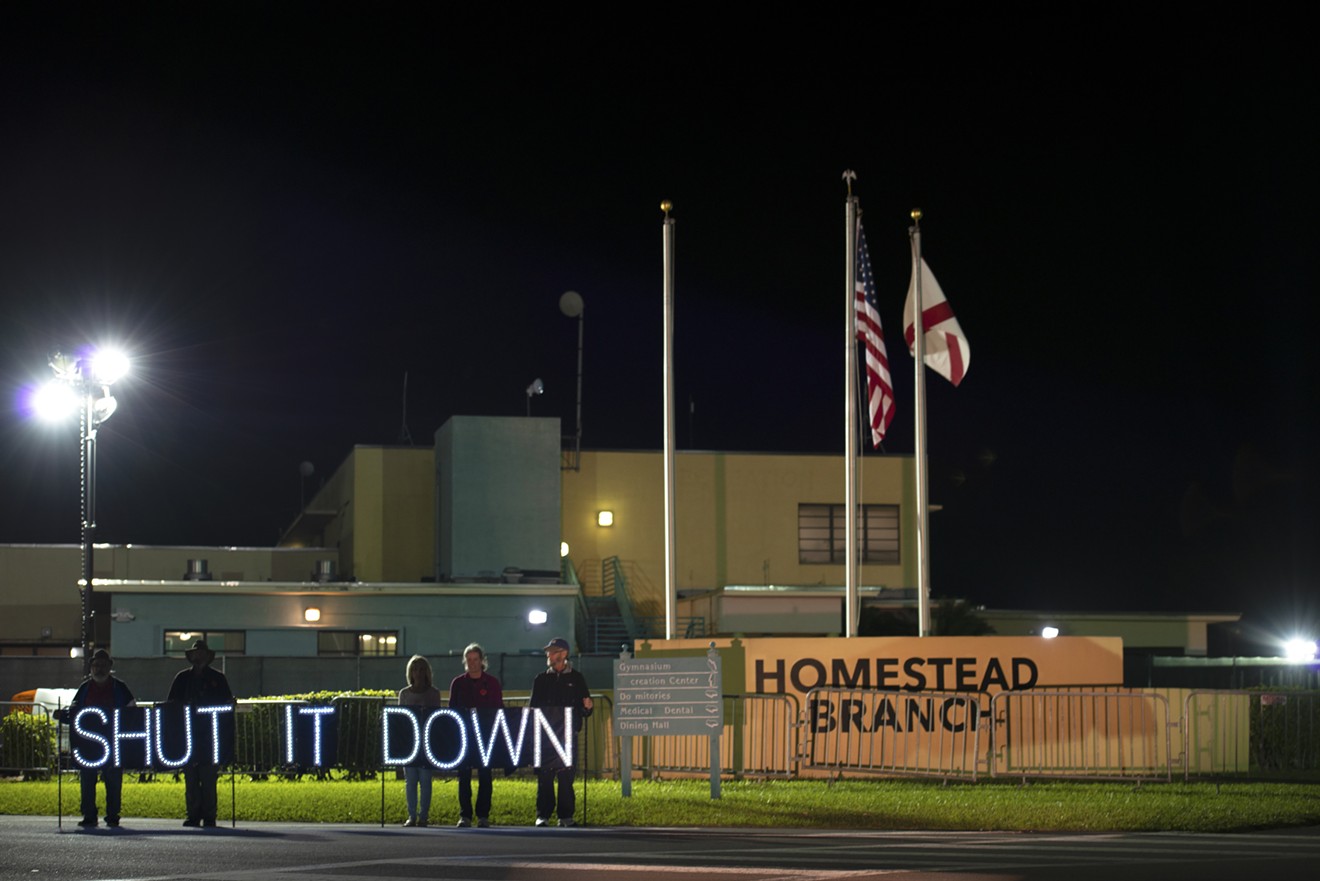 Activists with the group "Witness: Tornillo. Target: Homestead" protest outside the shelter. Photo by Carrie Feit
To get a job as a youth care worker at the Homestead facility for migrant children, applicants must be at least 21 years old, have a high school diploma, and pass a background check. Candidates also need to be bilingual and able to supervise children. And — in a detail that troubles advocates — they have to be physically able to restrain or coerce kids.

"In a sudden or emergency event," says an ad from the for-profit company that runs the center, "staff must at all times be physically able to run, jump, lunge, twist, push, pull, apply approved restraint techniques and otherwise manage or coerce the full weight of an infant or adolescent."

Activists who have been staging daily protests outside the shelter took note of the post last month on job site Indeed. The listing is no longer online, but versions of it remain on other hiring sites, like one called Myswork.com. Comprehensive Health Services, the company that has a $220 million contract to run the shelter, did not respond to New Times' inquiries about the job ad and why it was seemingly taken down. 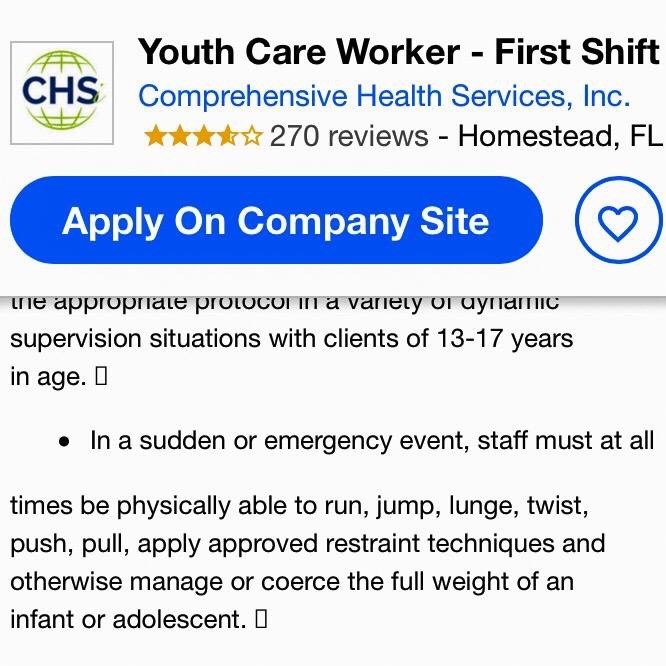 Screenshot via Alessandra Mondolfi
The listing raises alarm bells, says the Florida Immigrant Coalition's Tomas Kennedy — especially because so few people know what happens inside the massive facility, the only youth shelter in the country that's operated for profit. In recent months, some reporters have been allowed inside for tours, but even elected officials have at times been unable to access the facility. Last week, three South Florida congresswomen were denied entry, according to the Miami Herald.

A spokesperson from the U.S. Department of Health and Human Services declined to comment on the use of restraint techniques inside children's detention centers. But a policy guide from the Office of Refugee Resettlement says restraints or seclusion "should only be used in limited situations" in which children are at risk of physically harming themselves or someone unless such measures are against state law.

The guide defines restraints as either the application of physical force or a drug administered to manage a child's behavior.

A child can also be restrained during transport or while in immigration court if he or she poses a serious risk of physical harm or escape from custody. In that case, the guide says, "soft restraints" are used — zip ties or ankle weights.

"Restraints or seclusion should be a last resort and must be terminated as soon as the physical safety of the child and others can be ensured," it says.

The Homestead shelter once held children separated from their parents under the Trump administration's "zero tolerance" policy, meant to dissuade migrants from entering the U.S. at the southwest border. Officials say it now holds only minors who arrived in the country alone. Just last week, federal officials announced plans to expand the facility by 850 beds, bringing its capacity to 3,200.

Perhaps due to the expansion plans, Comprehensive Health Services is on a bit of a hiring spree, with 45 openings as of Sunday and a job fair planned for later this week. The line about being physically able to use restraint techniques appeared in listings for youth care worker positions, which involve direct supervision of children between 13 and 17 years old.

Notably, that language is not unique. Southwest Key, a Texas nonprofit that hosts more migrant children than any other organization in the country, used almost exactly the same words in a listing that was circulated by CNN host Jake Tapper and discussed on his show last June.


Look at the “physical demands” for Southwest Key staffers who are taking care of these children separated from their parents if they’re apprehended crossing the border — pic.twitter.com/cTLsgyPDSv

Alessandra Mondolfi, an artist and activist who recently projected the words "Shut it down" and "Homes instead" on the fences outside the facility, called the references to restraints and coercion "chilling." Reading the job post, she said, "was a kick in the gut."

Sometime after activists took screenshots of the ad on Indeed, its wording was subtly changed. The new "Youth Care Worker" listing still says the applicant must be able to lunge, twist, push, and pull children. But now it says the employee would do so to "assist evacuating an adolescent to safety."
KEEP MIAMI NEW TIMES FREE... Since we started Miami New Times, it has been defined as the free, independent voice of Miami, and we'd like to keep it that way. With local media under siege, it's more important than ever for us to rally support behind funding our local journalism. You can help by participating in our "I Support" program, allowing us to keep offering readers access to our incisive coverage of local news, food and culture with no paywalls.
Make a one-time donation today for as little as $1.