The law, in short, is nonsense. There are no sanctuary cities in Florida at the moment. It fixes a problem that does not exist. And some of its language comes from racist, anti-immigrant groups who were quietly advising Florida lawmakers about the bill. After DeSantis signed the measure Friday, civil-rights groups lobbed criticism at the governor, suggesting they will launch legal challenges to prevent the law from taking effect.

In the meantime, here's a rundown of why the bill is harmful and racist:

1. There aren't any sanctuary cities in Florida at the moment.

Although Republicans control the state Senate, House, and governor's mansion, the bill barely succeeded. Legislators repeatedly amended it, bouncing the legislation between the House and Senate until late in the evening, when a heavily amended version ultimately cleared both chambers. DeSantis then announced he plans to sign the measure into law.

“Earlier this year, I asked the Florida Legislature to present me with a bill this session that upholds the rule of law and addresses sanctuary cities and counties in Florida," DeSantis said yesterday evening in a media release. "We are a stronger state when we protect our residents, foster safe communities and respect the work of law enforcement at every level. Local law enforcement agencies can and should work with the federal government to ensure that accountability and justice are one in our state. I’d like to thank Senate President Bill Galvano, House Speaker Jose Oliva, Senator Joe Gruters, and Representative Cord Byrd for recognizing the importance of this issue."


2. A March study warned that Florida could lose billions because of SB 168. The New American Economy, a centrist, corporate-tied think tank, warned in March that the bill could drain billions from the Florida gross-domestic product:

According to data from New American Economy, 85.8 percent of undocumented immigrants in Florida are of working age (ages 16 to 64). They pay $1.7 billion each year in taxes, including more than $543.2 million in state and local taxes, and hold $13 billion a year in spending power to inject into the local economy. The costs of losing a significant portion of these workers could be substantial for Florida’s economy. 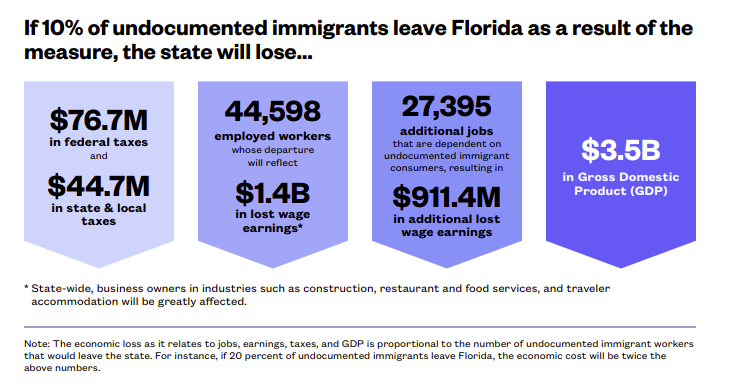 His solution? He callously told undocumented immigrants to use public transportation, which is basically nonexistent in Florida thanks to lawmakers such as Gruters.

"If people don't have driver's licenses, my guess is to do your best to do public transportation," Gruters said yesterday during a press gaggle.

Two points here: One, it's nightmarishly difficult to survive in Florida using only public transit, even in urban centers such as Miami. Two, and perhaps more important: No one is arguing that driving without a license should be legal. The issue is that Gruters, who looks like a potato brought to life by a racist warlock, wants to turn it into a deportable offense.


4. When Miami-Dade County stopped acting as a "sanctuary," it lost money and hurt relations with the community.

Frighteningly, those two people are not alone. According to a report released today by the American Civil Liberties Union, ICE erred in issuing 420 "detainer requests" for U.S. citizens in Miami-Dade from 2017 to 2019 alone. It's unclear how many of those 420 people were actually detained by county police or jails, but it's possible dozens or hundreds of Americans have been sitting behind bars in the Magic City awaiting wrongful deportation.

The ACLU obtained Miami-Dade's ICE detainer documents as part of Creedle's lawsuit against the county. According to the group's report, ICE voluntarily rescinded 83 of those requests after likely realizing the orders were mistakes.

"These errors can have profound consequences, both for the people who are wrongly held and for the agencies that hold them," the report states. "As recent cases illustrate, U.S. citizens have been kept in jail away from their jobs and families, and they have faced the terror of being told they would soon be deported from their only home. Many have spent time in immigration jail, and some have even been deported. Local police and sheriffs, in turn, have faced immense litigation costs and damages liability to the U.S. citizens they have held for ICE."

A spokespserson for ICE in Miami declined to comment due to pending litigation with the ACLU. But according to the report, false detainer requests are fairly common across the nation. The ACLU suspects three possible reasons: First, immigrant-rights groups say ICE's databases are filled with outdated information. (For example, the ACLU says ICE often fails to track when people become naturalized citizens.) Second, the Trump administration in 2017 expanded the types of immigrants ICE is encouraged to detain, which critics say allows the agency to process more requests and thus become sloppier with information. Third, the ACLU pointed to a recent CNN investigation that showed ICE agents routinely forging their bosses' signatures on critical detention warrants to skip mandatory document reviews.

False positives have occurred in other cities, but seemingly not to the extent they have in Miami. In Rhode Island, ICE issued 462 detainers for U.S. citizens over a ten-year period. During that same decade, ICE issued 814 false detainers in Travis County, Texas, which includes the city of Austin.

Spencer Amdur, a California-based attorney with the ACLU's Immigrant Rights Project, told New Times yesterday the startlingly high number of false detainer requests shows Miami-Dade County should rethink its cooperation with ICE. And, he said, state lawmakers should reconsider SB 168, a bill rapidly moving through the Florida Legislature that would force local governments to honor these ICE requests.

"This is a pretty shocking revelation," he said. "ICE has just regularly been sending Miami-Dade requests to jail U.S. citizens for deportation. This shouldn’t happen more than once. For it to happen potentially hundreds of times in just a two-year period, it raises very serious doubts about ICE’s detainer system and the risks the county is taking by signing up for it."

But shortly after Trump issued his order, Gimenez capitulated. He issued his own order demanding that Miami-Dade start holding ICE detainees in its jails again. Protests ensued, including a weeklong activist hunger strike outside county hall. But the county commission in February 2017 voted 9-3 to ratify Gimenez's decision.

Miami-Dade has received no financial benefit from the Trump administration as a result. But the county has spent millions holding immigrants for ICE and been repeatedly sued in the process.


5. The idea for the bill was pitched by an anti-immigrant extremist group.

On March 27, the News Service of Florida published portions of emails between state Sen. Joe Gruters, the chair of Florida's Republican Party; and Floridians for Immigration Enforcement (FLIMEN), an offshoot of the national anti-immigrant hate organization the Federation for American Immigration Reform, which was founded by a donor who supported Nazi-style eugenics.

Apparently, Gruters responded by hanging out with even more hate groups. On April 17, Gruters held a news conference to support SB 168, the anti-"sanctuary city" bill he's pushing that would force towns to cooperate with Immigration and Customs Enforcement. Immigrant-rights groups say the bill, if it became law, would rip apart families just to appease some racist Republican voters.

But two of the other speakers at the presser apparently belonged to hate organizations. The Southern Poverty Law Center (SPLC) today posted a Twitter thread noting one speaker, Amapola Hansberger, belonged to Legal Immigrants for America (LIFA), a group that wants to repeal the 14th Amendment and guarantee U.S. citizenship only to English speakers. A second guest, Yvonne Larsen, belonged to the Remembrance Project, a group that falsely preaches that undocumented immigrants are violent and dangerous.