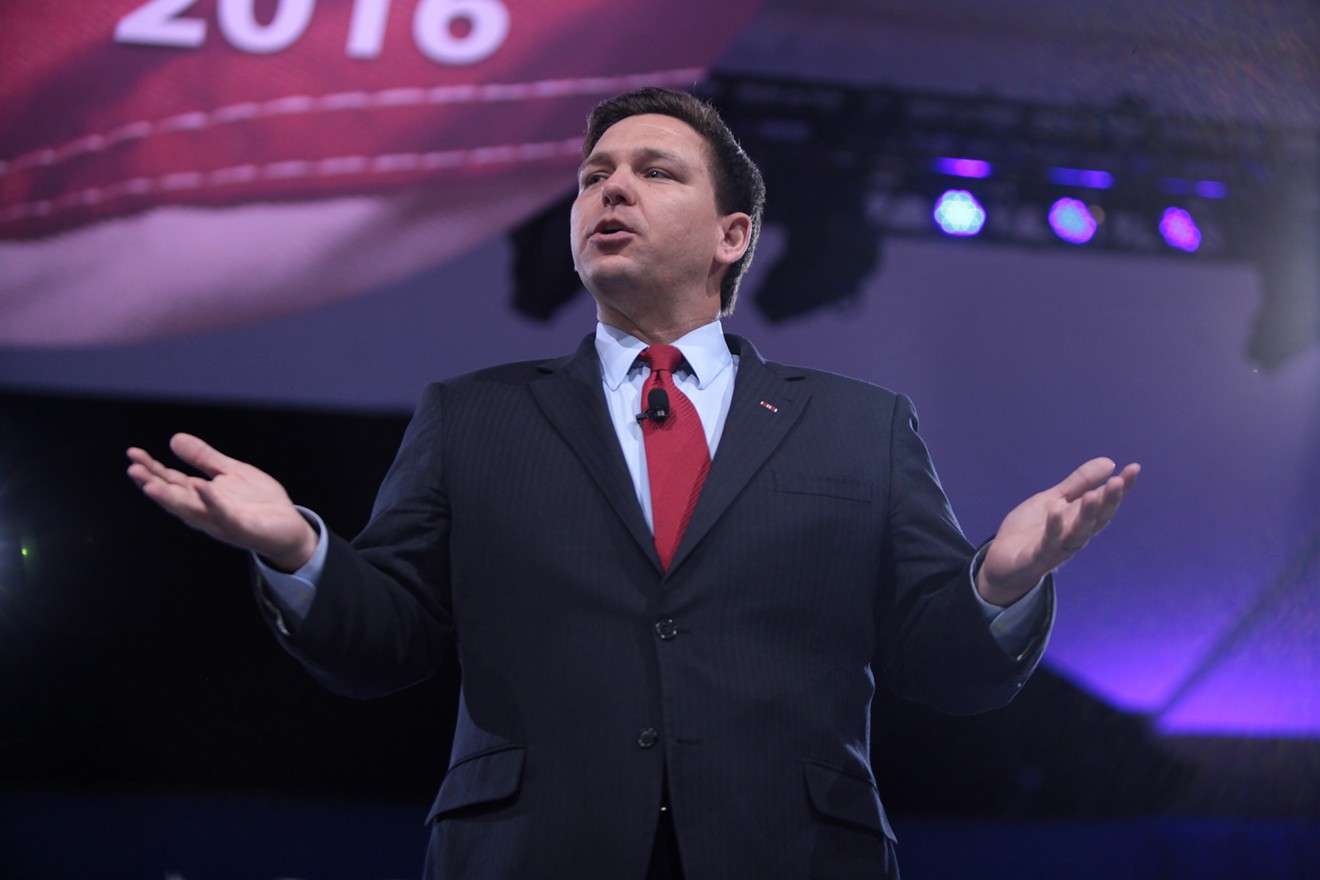 Ron DeSantis Photo by Gage Skidmore / Flickr
Florida gubernatorial candidate Ron DeSantis' 2011 tome, Dreams From Our Founding Fathers, is terrible. It's a book-long screed from the then-Tea Party candidate, in which DeSantis screams at President Barack Obama for 286 pages, implies he is a closet Marxist, and at one point writes that Obama has "Muslim roots." The book sucks because it is an absolute slog. New Times combed through huge portions of DeSantis' repetitive, banal, witless, and crushingly pedestrian prose, and the project reads like a book report from a dying Confederate soldier trying to get a community college poli-sci degree.

But, more important, the book sucks because parts of it are pretty offensive to black people, Muslims, and women. DeSantis' book includes justifications excusing the legalization of slavery in the U.S. Constitution, as well as repeated complaints about policies designed to protect women from rape and domestic violence.

As the political-opposition research group American Bridge discovered yesterday, portions of the book rationalize the fact that the U.S. Constitution allowed slavery. DeSantis rails against former Supreme Court Justice Thurgood Marshall, who once said the Founding Fathers were hypocrites for creating a so-called free state that allowed slavery.

DeSantis also incorrectly claims in the book that the Three-Fifths Compromise — the heinous law that counted black people as three-fifths of a human for purposes of representation in Congress — "benefited anti-slavery states." This is simply inaccurate: Blacks at the time could not vote, but the provision gave slave-holding states extra representatives in Congress.

Frighteningly, DeSantis argues it was OK for slavery to remain legal in the 1780s because the U.S. Constitution was allegedly so smart and revolutionary that its positive provisions outweighed the part where it legalized enslavement, mass torture, and killing of kidnapped Africans.

In short, DeSantis believes approving one of the greatest atrocities in human history was fine because the rest of the Constitution was so good:

This is why there was no real chance that the Convention would abolish the peculiar institution of slavery. Some of the notorious compromises that demonstrated a toleration of slavery, such as the “federal ratio,” which allowed the slave-holding states to count 5 slaves as the equivalent of 3 free citizens (the free states did not want slaves counted at all because they did not want the political power of slave states to be enhanced), were even thought to be necessary to ensure ratification. Hamilton, a counselor to the New York Manumission Society, later lamented that without such a compromise “no union could possibly have been formed.” Similarly, Benjamin Franklin, who served as president of the Pennsylvania Abolition Society, declined to read a letter to the Convention delegates from the Society that denounced slavery on religious and republican grounds. Franklin did not want to derail the Convention by further inflaming the delegates over the issue of slavery, and believed that the United States could not last without a new federal government, for, as he wrote in his final Convention speech, “our States are on the point of separation, only to meet hereafter for the purpose of cutting one another’s throats.” For anti-slavery delegates like Hamilton and Franklin, abolition of slavery would be a moot point if a failure to erect a functioning government snuffed out the ideals of the American Revolution in their infancy; then, the future of all Americans, the free as well as the slave, would eventually be as serfs to a despotic government.

In reality, plantation owners simply wanted more votes in Congress, and even with the Three-Fifths Compromise in place, anti-slaveholding states got nothing out of the deal:


Dinesh D'Souza says the Three-Fifths Compromise does not show that the founders considered black people less than fully human, because "the South wanted blacks to count for a full person." pic.twitter.com/OWIx0sdncd

In addition to relaying his thoughts on slavery, DeSantis' treatise includes a ton of other upsetting parts. Most notable, DeSantis repeatedly rails against laws designed to protect women and uphold gender equality. Specifically, he repeatedly attacks Obama for supporting the United Nations' Convention on the Eradication of All Forms of Discrimination Against Women. Here's a primer from the UN about what that international agreement seeks to accomplish:
DeSantis included this tidbit in a screed otherwise dedicated to yelling at Obama for complying with international UN treaties, which DeSantis argues are against the wishes of the Founding Fathers. But this isn't the only time he complains about laws protecting women's rights. He also writes that Obama's 2009 post-economic-crash stimulus package included $300 million "to 'combat' violence against women." The sarcastic quotation marks around "combat" are his.

Not only is complaining about this sort of thing generally asinine, but also DeSantis clearly doesn't understand that fighting for women's equality is a form of economic justice. Numerous studies show that rape, domestic violence, and gender discrimination hold women and domestic-violence victims back in the workplace and sabotage their earning power. DeSantis is not only being a callous asshole by arguing against these protections but also revealing himself as ignorant.

He also writes that he opposes UN protections for individuals with disabilities. And elsewhere in the book, he delves into pure anti-Muslim racism by arguing repeatedly that President Obama capitulated to Muslim nations. DeSantis accuses him of repeatedly "showcasing his father’s Muslim roots and his middle name of 'Hussein'" to look good to Middle Eastern countries.

As American Bridge already noted, the book is also chock full of inaccuracies. Most of the lies relate to Obama, including a false claim he was the "only president" to remove the words "endowed by their Creator" when talking about Americans' "inalienable rights." In reality, Franklin Delano Roosevelt and Ronald Reagan did the same.

But don't worry, folks: DeSantis, a man who has repeatedly hung out with virulent Islamophobes, racists, and anti-LGBTQ bigots, is definitely a good guy, because his book also quotes Martin Luther King Jr.'s "I Have a Dream" speech.
KEEP MIAMI NEW TIMES FREE... Since we started Miami New Times, it has been defined as the free, independent voice of Miami, and we'd like to keep it that way. With local media under siege, it's more important than ever for us to rally support behind funding our local journalism. You can help by participating in our "I Support" program, allowing us to keep offering readers access to our incisive coverage of local news, food and culture with no paywalls.
Make a one-time donation today for as little as $1.