A young woman with a Juul. Photo by Vaping360 / Flickr
Like many American teens, J.Y. started vaping after he saw other kids at his high school doing it. When he was 15, the Saint Lucie youth started buying products from Juul — the crazy popular e-cigarette company that has tapped heavily into the teenage market — at his local Wawa. Now 16, J.Y. says he's addicted and vapes Juul pods up to 12 times a day.

That's why J.Y. and his mother, Barbara Yannucci, have now sued Juul Labs, Inc., in Florida's Southern District federal court. Yannucci is suing the e-cigarette maker for fraud, unjust enrichment, failure to warn, and negligence — just the latest in a string of lawsuits around the country that have been filed against the San Francisco-based company in the past year, with consumers claiming the nicotine in Juul's e-cigarettes is more potent and addictive than advertised.

"Juul Labs does not believe the case has merit and will be defending it vigorously," a spokesperson for the company said in a statement emailed to New Times.

Juuls are compact, easy to and resemble a USB device. They can be charged on a computer, and boast an array of flavors from mango, crème brûlée, fruit medley, and mint. Juuls heat up liquid nicotine, allowing users to inhale huge, concentrated puffs of the drug and do not generally leave a lingering smell like cigarettes, allowing kids to sneak puffs in school bathrooms and at home unnoticed. One nicotine cartridge delivers about 200 puffs, the equivalent of a pack of cigarettes, Juul's website claims. That combination has helped the company build skyrocketing sales and huge Silicon Valley investment over the past two years.

But critics have long accused the company of marketing a dangerous product at teenagers and of hiding just how addictive their e-cigs are.

In April, two Californians sued the vape maker, saying the company's deceptive marketing practices caused them to become seriously addicted. The following month, another lawsuit was filed in California, this time by a man named Carl Cooper who said he started using Juul to quit smoking cigarettes, which is exactly what Juul promises to help smokers do. But instead, Cooper said, Juul only heightened his addiction, turning him from a weekend smoker to a daily vaper within a few short weeks.

In June, a New York mother filed a lawsuit against the company on behalf of her 15-year-old son, stating that he, too, became so addicted to nicotine that his parents had to switch his schools and eliminate private areas from their home to make it harder for their son to hide his habit. According to the lawsuit, the teen can't stop "," becomes irascible and anxious if he cannot get his nicotine fix, and has started performing poorly in school ever since becoming addicted.

The Yannuccis allege that Juul knew its e-cigarettes were not safe and that the company uses a nicotine solution that delivers more nicotine into the bloodstream than a cigarette, but never disclosed these facts. Instead, Juul "disseminated false, misleading, and deceitful information to Plaintiffs and the public on Juul's website, in interviews, advertisements, and through social media," particularly to teens on Instagram, where the company has 62,000 followers and users can find nearly 200,000 posts using the #juul and #juulnation hashtags.

When J.Y. first started , he had no idea how dangerous it was, the lawsuit claims, since he was a kid and "does not read the packaging." At first, he hid it from his mother, but since she's found out, "she has done and continues to do everything in her power to get her son to quit using Juul products."

"She has not been successful to date," the lawsuit states.

DeSantis says Juul's marketing is blatantly directed at young people in an attempt to ensnare a new generation of nicotine users. 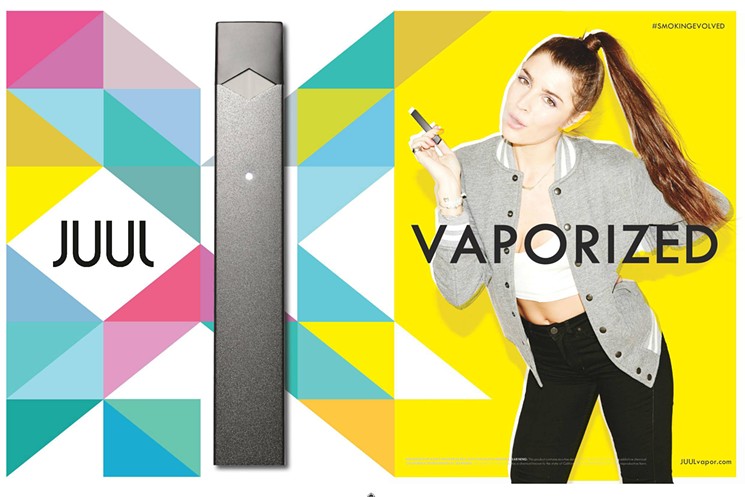 Juul's 2015 ad campaign.
Photo from lawsuit
In April 2018, prompted by Juul's popularity among children, the FDA announced it would be investigating Juul's marketing to youth and sent a letter asking the company to submit information regarding its marketing strategies and research.

The lawsuit filed last week in Florida and the three others filed earlier this year all reference a study in the British Medical Journal that found Juul benefited greatly from its social media marketing strategy using influencers. All four lawsuits also reference a study in the academic journal PLOS One, which found that Juul may be delivering higher levels of nicotine than advertised.

The Yannuccis are asking a federal judge to grant their case class-action status so other Juul users can join the litigation.
KEEP MIAMI NEW TIMES FREE... Since we started Miami New Times, it has been defined as the free, independent voice of Miami, and we'd like to keep it that way. With local media under siege, it's more important than ever for us to rally support behind funding our local journalism. You can help by participating in our "I Support" program, allowing us to keep offering readers access to our incisive coverage of local news, food and culture with no paywalls.
Make a one-time donation today for as little as $1.