Florida Rep. Jason Brodeur (R-Sarasota) Florida House of Representatives
Are you, perhaps, a Marjory Stoneman Douglas High School student who is sad or upset that a disturbed 19-year-old was able to buy an AR-15 rifle legally and kill 17 of your friends and teachers last week?

State Rep. Manny Diaz Jr. of Miami also has a message for you: You're actually too young and dumb to understand what happened to you and are being used by disingenuous leftists for political gain.

They haven't actually said those messages in public. But New Times noticed yesterday that both politicians had liked tweets this week that straight-up insulted the survivors of one of the worst school shootings in Florida history. Though Brodeur and Diaz didn't outright claim the Parkland students were crisis actors trying to pass off a deep-state false flag — that honor belongs to a since-fired aide to fellow state Rep. Shawn Harrison — both apparently just want these kids to shut the hell up already about all the trauma they've been forced to endure.

Most frightening, Brodeur liked a tweet from Katie Hopkins, a far-right British media personality who is closely allied with Brexit pusher Nigel Farage and Nazi befriender Milo Yiannopoulos. Hopkins creates content for the Canadian website the Rebel Media, AKA "Canadian Breitbart." The Rebel famously lost most of its staff last year after too many columnists expressed solidarity with the neo-Nazis marching in Charlottesville, Virginia. Hopkins has herself endorsed the idea of placing British Muslims in internment camps.

"Let me get this," the Brodeur-endorsed tweet begins. "Florida House Republicans should have voted YES to discussing assault weapons ban because a #StonemanDouglas student was upset in the gallery? Do you want to be governed by  Or hearts?" [sic]

via Twitter
There's nothing illegal about what Brodeur did here. He's simply a huge jackass. (Brodeur also is famous for proposing a 2011 bill that would have jailed doctors who discussed gun-safety with their patients.) But frighteningly, Hopkins has also shared a few Parkland "truther" memes suggesting these students were some sort of coordinated (((globalist))) conspiracy to take guns away from Americans.

1) do not pose for team pics

Hopkins has also filmed a video in which she lobs insults at the students. Her arguments are predictable, sophomoric nonsense and sound like she's shouting random tweets at the camera.


The #KFF (Kids From Florida) are determined this is all Trumps fault. Do you wonder who’s pulling their strings? #MarchForOurLives #NeverAgain WATCH : pic.twitter.com/6UfUanyczD

As for Diaz, he apparently really enjoyed a story from the Daily Wire, the pedantic, hectoring website run by ex-Breitbart troll Ben Shapiro. The article in question, "Stop Using Traumatized Kids to Push Your Political Agenda, You Despicable Cowards," came from insufferable far-right columnist Matt Walsh. (Walsh is an infamous homophobe and proud sexist whose douchey tattoos make him look like a barista who got fired for drawing white-supremacist symbols on a coffeehouse chalkboard.)

The article Diaz endorsed accuses the students of peddling lies.

"I don’t think these kids are intentionally lying," Walsh wrote. "When they say that Republicans are 'funding killers,' they are saying what they honestly believe — and probably were told — is true. But you know better. So when you bring a shell-shocked kid on TV to say untrue things, he is not lying but you are. And worse, you are hiding the lie under the bodies of 17 dead children. I don't have the words to express how contemptible this tactic truly is." 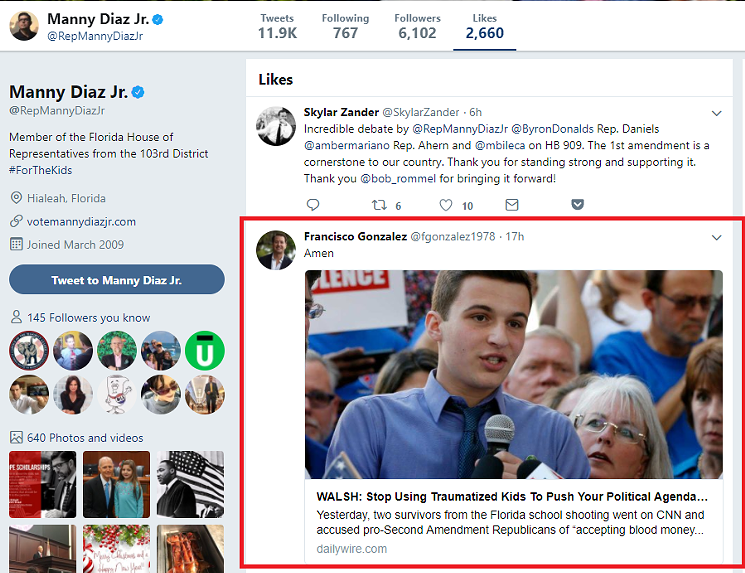 via Twitter
One day after Diaz liked the article, he met with the Parkland students he apparently thinks are spewing lies. Diaz claimed he was "amazed at their courage and leadership," which is an odd thing to say after endorsing an article accusing them of being patsies.

Brodeur did not respond to messages from New Times sent yesterday evening. But Diaz sent New Times a statement that does not even come close to explaining why he liked the article:

After we reached out, Diaz seems to have since un-liked the Tweet.

Elsewhere, many of Florida's politicians don't so much live in their own right-wing social media "bubbles" as they wallow in stinking tar pits of social media trolls and . Reps. Julio Gonzalez and Ross Spano follow an account called "@YoungDems4Trump," which shared Parkland "crisis actor" memes this week before rapidly deleting everything after backlash ensued. Gonzalez has also shared items from alt-right troll Jack Posobiec in the past. It's safe to say multiple Florida politicians are getting exposed to this nonsense.

via Twitter
For what it's worth (which is not a ton), a small number of Florida lawmakers said they were outraged at the folks lobbing insults at the child victims of the Stoneman Douglas shooting. Tampa Rep. James Grant called right-wing filmmaker and felon Dinesh D'Souza's Tuesday insults "indescribably disgusting" — we wonder if he'll have similar words for his fellow colleagues.

via Twitter
No one knows anything! Excuse us while we go into the sky.

Update: Brodeur sent New Times the following statement in response. He did not offer an apology.

I viewed this as part of an ongoing effort to correct the false narrative about what we voted on Wednesday. My office has fielded calls, emails, and media posts regarding a false narrative being spread. You will notice from my other twitter interactions - whether it be directly to constituents or liking other commentary about the media reaction - that it has all been very consistent with regard to media narrative of what the vote was about.

I’m very sensitive to the event itself, it’s victims, and the post traumatic stress this has caused, but my role right now is the public policy surrounding it. Setting false expectations about the process itself isn’t helpful and these victims clearly have their own vision for what they would like.