Rubio Didn't Challenge the Election, but He Has Long Been Trump's Toady 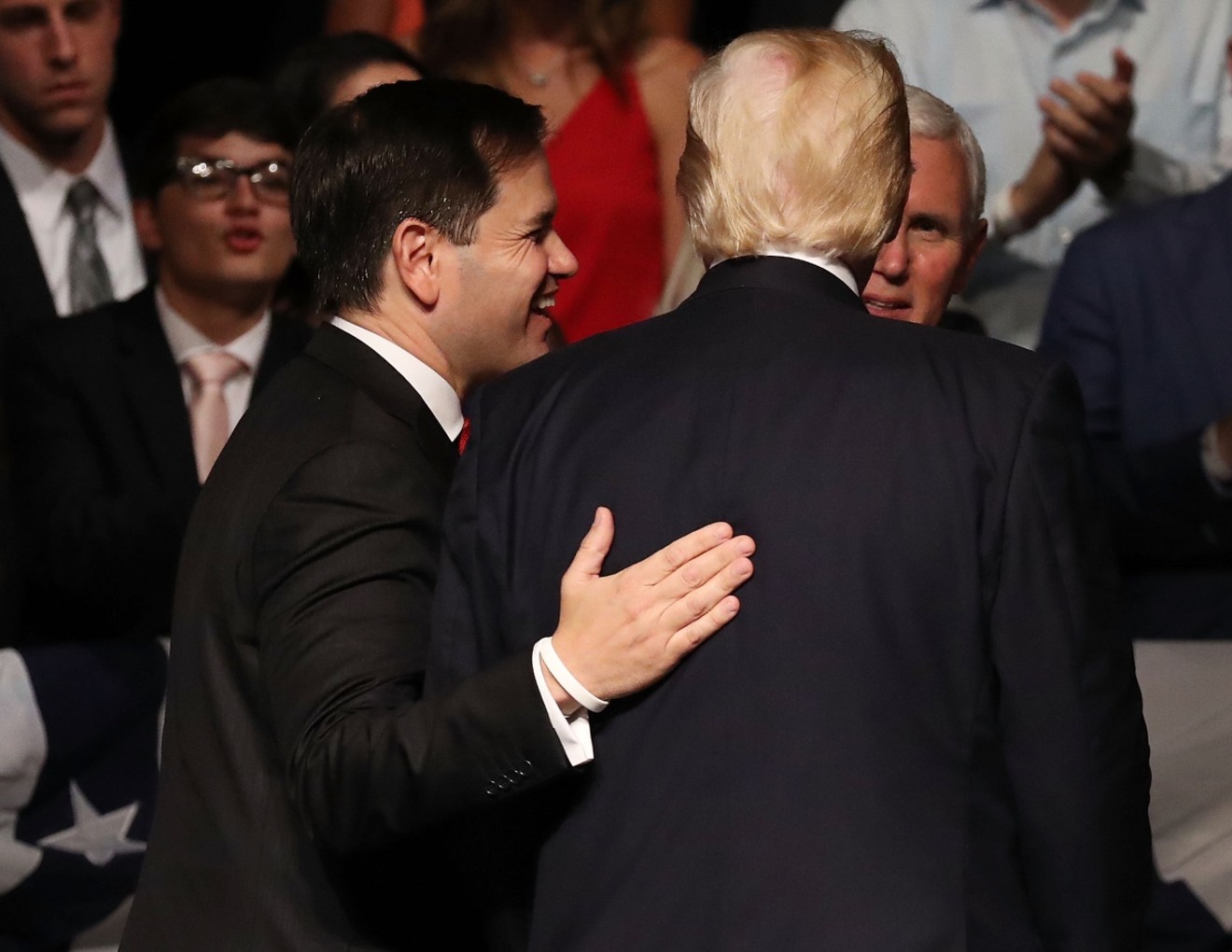 You take my spine, I'll take yours. Photo by Joe Raedle/Getty
This week, President Donald Trump provoked a violent right-wing mob to storm the U.S. Capitol in an attempt to block the certification of President-Elect Joe Biden's victory. After members of Congress returned to the bloodied, sullied, ransacked, and shattered building later that evening, nearly 150 Republican lawmakers still voted to object to the results of the November election.

Among those who chose to continue to feed into Trump's election-fraud fantasy are Florida's own freshman Rep. Carlos A. Giménez, who until November was Miami-Dade County's mayor; Rep. Mario Díaz-Balart, whose district includes parts of Hialeah and Doral; and Sen. Rick Scott, the state's former governor.

Despite having been one of Trump's most devoted allies over the past four years, Sen. Marco Rubio did not vote to challenge the election results.

Before Trump was elected, Rubio prided himself on expressing how terrible a Trump presidency would be for the United States. But Rubio changed his tune when it became apparent that he had more to gain from playing nice. Rubio defended Trump's family separation policies and failed to acknowledge religious discrimination when Trump sought to ban Muslims from entering the U.S.

True to his nature, Rubio is now hemming and hawing about the attack on the Capitol and the disinformation and lies that led up to it.

In the spirit of Rubio's act of bravery being too little too late, here are five times the Florida senator with the world's most flexible spine refused to stand up to the man who dubbed him Little Marco.

After saying #NeverTrump, Rubio vowed to vote for him. When Rubio sought the Republican nomination for president in 2016, he spent much of his campaign shitting on Trump. Rubio sold "Dump Trump" yoga pants and "#NeverTrump" T-shirts on his campaign site. He called Trump a "con man" and said he was "unelectable." He said Trump was dangerous and that he was a defender of white supremacists. Rubio even mocked Trump's itty-bitty-baby hands and suggested the Donald had an itty-bitty-baby penis to match. But when Trump secured the Republican nomination for president 84 long years ago, Rubio said he planned to vote for him and encouraged his fellow Americans to do the same.


New statement from @marcorubio saying he is still voting for @realDonaldTrump @CBSMiami pic.twitter.com/yTgltkh7z9

Rubio continued pledging support after Trump's "grab 'em by the pussy" video went viral. In October 2016, the Washington Post published a bombshell article and video of Trump bragging about sexually assaulting women. Trump was on a bus with Billy Bush, then the host of the NBC celebrity entertainment show Access Hollywood, en route to film a segment for the show in 2005. Trump boasted about his ability to force himself on women without consequences.

In a statement, Rubio responded by saying, essentially, that he'd rather have a sexual predator as president than a woman.


Not only on articles. Based on Trump's own remarks. He told Holt he fired Comey in part because of the "Russia thing." Please pay attention. https://t.co/EKskVOFDgC

Rubio went to bat for Trump during the ex-FBI director James Comey's Senate Intelligence hearing. Trump fired his FBI director, James Comey, in May 2017 while Comey was leading an investigation into whether members of the president's campaign were involved in Russia's election interference scheme. Weeks later, Comey testifed publicly in a Senate Intelligence Committee hearing on Russia. Rubio fiercely defended the president during the hearing and seemed more concerned about Comey not complying with Trump's requests for loyalty than with election interference.

Rubio toed the line at Trump's impeachment trial. In December 2019, the U.S. House of Representatives approved two articles of impeachment against the president in connection with Trump's call to the Ukrainian president soliciting dirt on Joe Biden. The Republican-controlled Senate acquitted Trump, which surprised no one. Before the impeachment trial, Rubio released a video and a statement in Trump's defense. Rubio said that for him, the issue was not whether what the president did was wrong, but whether it was serious enough for him to be removed.

"We love what they did, but here's the thing they don't know: We do that in Florida every day. I love seeing the boat parades ... We thank all the great patriots..." pic.twitter.com/kRaLcW60jn

Rubio gloated when a Trump caravan ran Biden supporters off the road. Days before the presidential election November, a group of Trump supporters driving on a Texas highway followed a Biden campaign bus, surrounded it, and attempted to run it off the road. Trump praised his supporters and called them "patriots." During a Trump rally at Miami/Opa-locka Executive Airport a few days later, Rubio voiced support for the attempted violence against Biden supporters, saying, "We love what they did."
KEEP MIAMI NEW TIMES FREE... Since we started Miami New Times, it has been defined as the free, independent voice of Miami, and we'd like to keep it that way. With local media under siege, it's more important than ever for us to rally support behind funding our local journalism. You can help by participating in our "I Support" program, allowing us to keep offering readers access to our incisive coverage of local news, food and culture with no paywalls.
Make a one-time donation today for as little as $1.