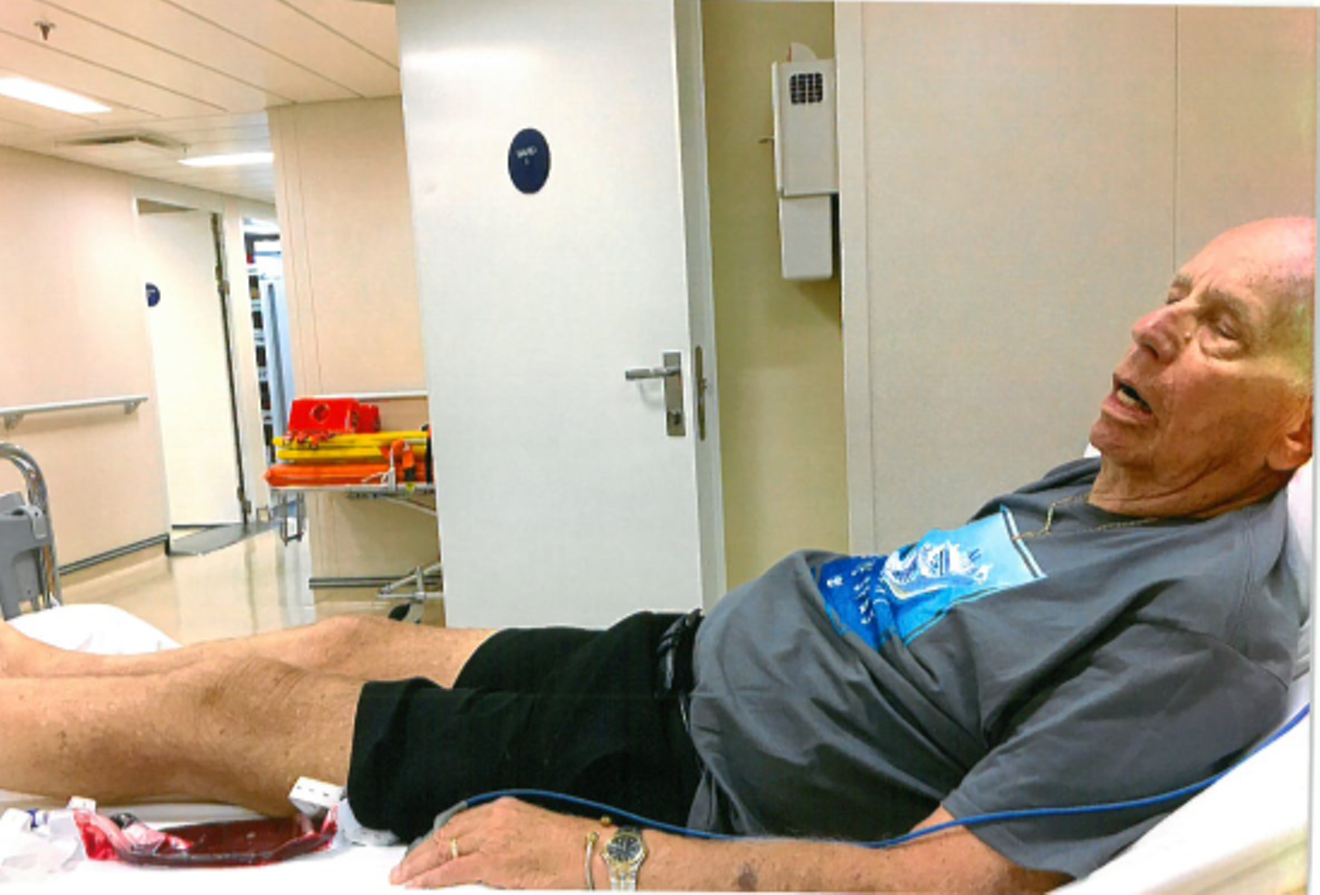 Eighty-five-year-old Lewis Masotti in the ship's infirmary with a bladder drainage bag full of blood. Photo courtesy of Judith Masotti
Lewis Masotti loved playing golf. He has competed at a professional level for many years, participated in charity games, and even lived on the Madison Greens golf course in Royal Palm Beach for 18 years. But after a cruise vacation gone wrong, the 85-year-old might never pick up a putter again.

Lewis boarded the Royal Caribbean's Harmony of the Seas with his wife Judith the week of May 21, 2018. The cruise was set to sail to Cozumel, Mexico, and the two were ready to have a week of fun enjoying their retirement at sea, as they had done two or three times a year for many years.

After a few days of minigolf and poolside lounging, Lewis checked himself into the ship's medical bay at 8 a.m. Wednesday, May 23. He had boarded the ship with a catheter and a urinary drainage bag, which he'd been using for five months. Lewis was having trouble reinserting the catheter while on the cruise, so he followed his primary doctor's advice and went to the ship's medical staff for help.

The doctor onboard inserted the catheter and, according to Judith, immediately drew only blood, which had never happened before.

"In the five months that he's been self-inserting, not once has there been a drop of blood," Judith tells New Times. "I asked the doctor what was going on, and the doctor said there must be blood in his bladder and to come back at 4 p.m. when the bay reopened." 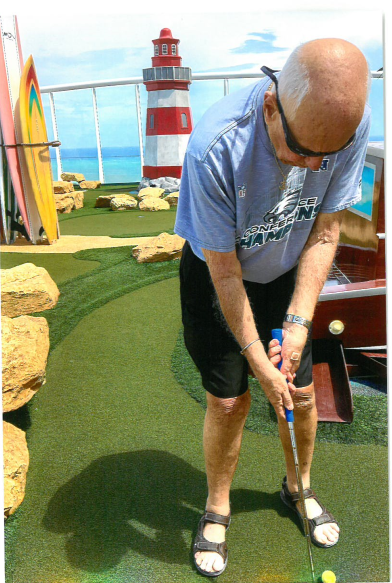 Lewis played minigolf the day before his ordeal in the infirmary.
Photo courtesy of Judith Masotti
The couple went back to their suite, but by noon Lewis was delirious and shaking in his lounge chair. A steward had to help him onto the couch and cover him with blankets to try to ease his trembling. By 3:30, Judith couldn't wait any longer, she says. She had someone help her take her husband back to the medical bay, where they waited a half-hour for a nurse to arrive.

"The nurse was shocked because the bag from earlier was full of blood. They replaced the bag and took diagnostics, but they eventually sent him back to the suite to stay the night," Judith says.

Lewis couldn't eat or sleep that night, and at 6 a.m. the next day, his wife rushed him back to the medical bay in a wheelchair — he could no longer walk. His bag was filling with blood again, and he was fading in and out of lucidity. Doctors would later tell them that Lewis was suffering from sepsis and severe dehydration from not being able to drain his bladder.

The doctors in the medical bay took Lewis' vitals and asked Judith if she bought trip insurance. She rushed back to her suite to get the paperwork, and on her way there, she heard an announcement over the ship's PA system asking for blood donors with O-negative blood. "I knew it had to be Lewis," she says.

She ran back to find her husband with his mouth hanging open and the doctors saying they had to get him to a Mexican hospital. 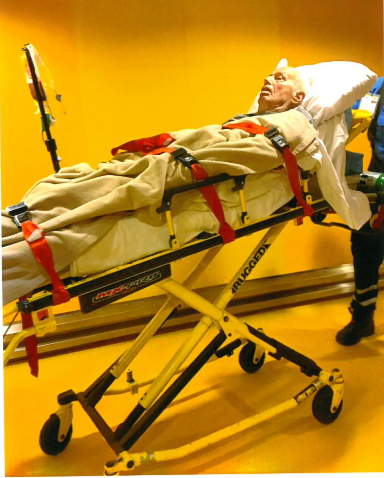 Emergency transport off the ship and to a hospital in Cozumel.
Photo courtesy of Judith Masotti
Several agonizing hours later, Lewis was transported to Costamed, a hospital in Cozumel, after the ship docked. Doctors there ordered a CT scan and found Lewis' catheter — the one the Royal Caribbean doctor had inserted — had never reached his bladder. Instead, it punctured his urethra on the way in and was drawing only blood. Judith says when they finally punctured his bladder to drain it, only urine came out — there was no blood to be found.

After many months of rehabilitation, Lewis is now walking with a cane, something the doctors and Judith weren't sure he would be able to do. Still, his life is nowhere near what it used to be.

"The doctor won't let me fly anymore to see my brother in New York, like I would every year. I can't travel on cruises... and I can't play golf," Lewis says.

The Masottis are now suing Royal Caribbean for negligence. They say the medical staff failed to properly insert the catheter or take appropriate steps to fix the issue once they saw his vital signs dropping.

"The doctors should have recognized Lewis' severe vital sign changes and done something, but they realized too late," says Glenn Holzberg, an attorney for the couple. "Lewis now has a permanent catheter, and his wife has to be his at-home nurse."

The Masottis say they sent Royal Caribbean a pre-suit demand for $750,000, which the cruise line did not respond to in writing. Spokespeople for Royal Caribbean cited the pending litigation for declining to comment for this story.

Judith is also suing the cruise line for loss of consortium because she and her husband of 31 years can no longer have sex. His condition has "put an end" to that part of their relationship, she says.

In the past, cruise passengers have not been able to sue for loss of consortium caused by onboard accidents because the courts have treated passengers like crew members. But a case being heard in the Supreme Court this year could turn the legal tide in passengers' favor. If the court in Dutra Group v. Batterton rules that crew members can sue ships for punitive damages after personal injury, the case can be made for passengers to do the same.

While the battle revs up in court, Lewis is still doing physical therapy in the hospital and at home. He's walking as much as he can with a cane, and he hopes to build the strength to one day pick up a golf club again. Judith continues to care for him and pick up the tasks around the house that he can no longer do.

"The most important thing to me is that he's alive," she says. "I'll be his nurse until the day it ends."
KEEP MIAMI NEW TIMES FREE... Since we started Miami New Times, it has been defined as the free, independent voice of Miami, and we'd like to keep it that way. With local media under siege, it's more important than ever for us to rally support behind funding our local journalism. You can help by participating in our "I Support" program, allowing us to keep offering readers access to our incisive coverage of local news, food and culture with no paywalls.
Make a one-time donation today for as little as $1.