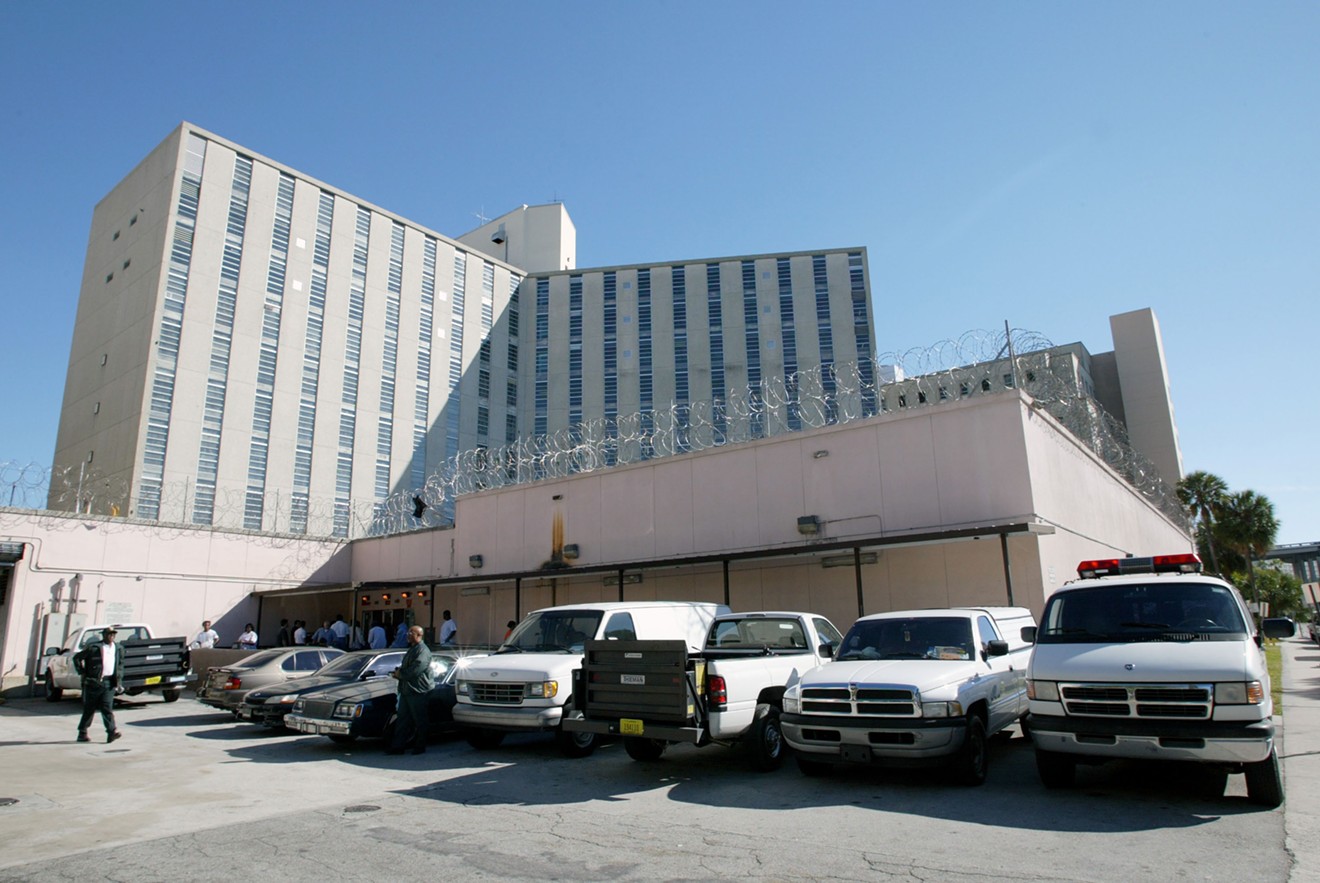 Up to 4,300 people are detained every day in Miami-Dade County. Photo by Eliot J. Schechter/Getty Images
Angry locals shuffled into yesterday's county commission meeting to oppose Miami-Dade Mayor Carlos Gimenez's plans to build a $393 million jail next to Turner Guilford Knight Correctional Center (TGK). When the dust settled, county commissioners voted unanimously to table those discussions for 90 days, putting off any action until June.

"Just as a pointed gun to the face is a threat, this jail indicates the desire to put someone in chains, and it is also a threat to this community," said Jahdiel Murray, a Miami Gardens youth advocate with MG Families Unite. "Who do you plan to jail, black and brown bodies again?"

Advocates asked commissioners to dedicate funds to housing and education instead of new "cages."

"Jailing people in these institutions does not keep our communities safe," said Valencia Gunder, an activist and founder of Make the Homeless Smile.

Other speakers were opposed to the proposed location for the facility. A small bridge connects TGK to Virginia Gardens, and that community has complained for years about inmates released at night who wander about because they have no means of returning home.

"Please consider the human factor," Virginia Gardens Councilwoman Elizabeth Taylor-Martinez said. "As a former school counselor, I am asking that some consideration be made on the part of the county for the transportation of these individuals back to their home communities."

Gimenez committed to putting an end to that problem.

"We are making accommodations so that as individuals are released, they will go back to where they came from, and we will provide the transportation," the mayor said.

One physician raised eyebrows when she described the number of arrestees who come into jail with serious communicable diseases such as tuberculosis. Other members of the public urged commissioners to increase mental healthcare services for Miami-Dade inmates. Helen Peña, founder of the arts collective (F)empower, described how her sister, who has schizoaffective disorder, suffered for months without proper treatment while in pretrial detention.

"This is a personal matter to me," Peña said. "Twenty percent of Miami-Dade's inmates are in a mental health crisis."

Miami-Dade's existing jails are 30 to 60 years old and require significant improvements, according to the county. Corrections director Daniel Junior said building a new jail is necessary for the safety and health of inmates and staff.

"This is not about expansion," said Junior, who oversees the nation's eighth-largest jail system, with a daily population of 4,300 inmates. "This is about humane conditions for our residents."

However, no one at the meeting advocated for or spoke in favor of Gimenez's jail plans, and Commissioners Jose "Pepe" Diaz, Eileen Higgins, Jean Monestime, and Rebeca Sosa voted against accepting the mayor's report. The 4-4 tie vote came at the end of the nearly seven-and-a-half-hour meeting after some commissioners had already left.

"I understand that we need to do something," said Diaz, who has five detention facilities in his district. "But this is not the way. You have a bedroom community right on the other side."

"It is simply the first step in moving forward to take some action to fix some of our facilities," she told meeting attendees.
KEEP MIAMI NEW TIMES FREE... Since we started Miami New Times, it has been defined as the free, independent voice of Miami, and we'd like to keep it that way. With local media under siege, it's more important than ever for us to rally support behind funding our local journalism. You can help by participating in our "I Support" program, allowing us to keep offering readers access to our incisive coverage of local news, food and culture with no paywalls.
Make a one-time donation today for as little as $1.