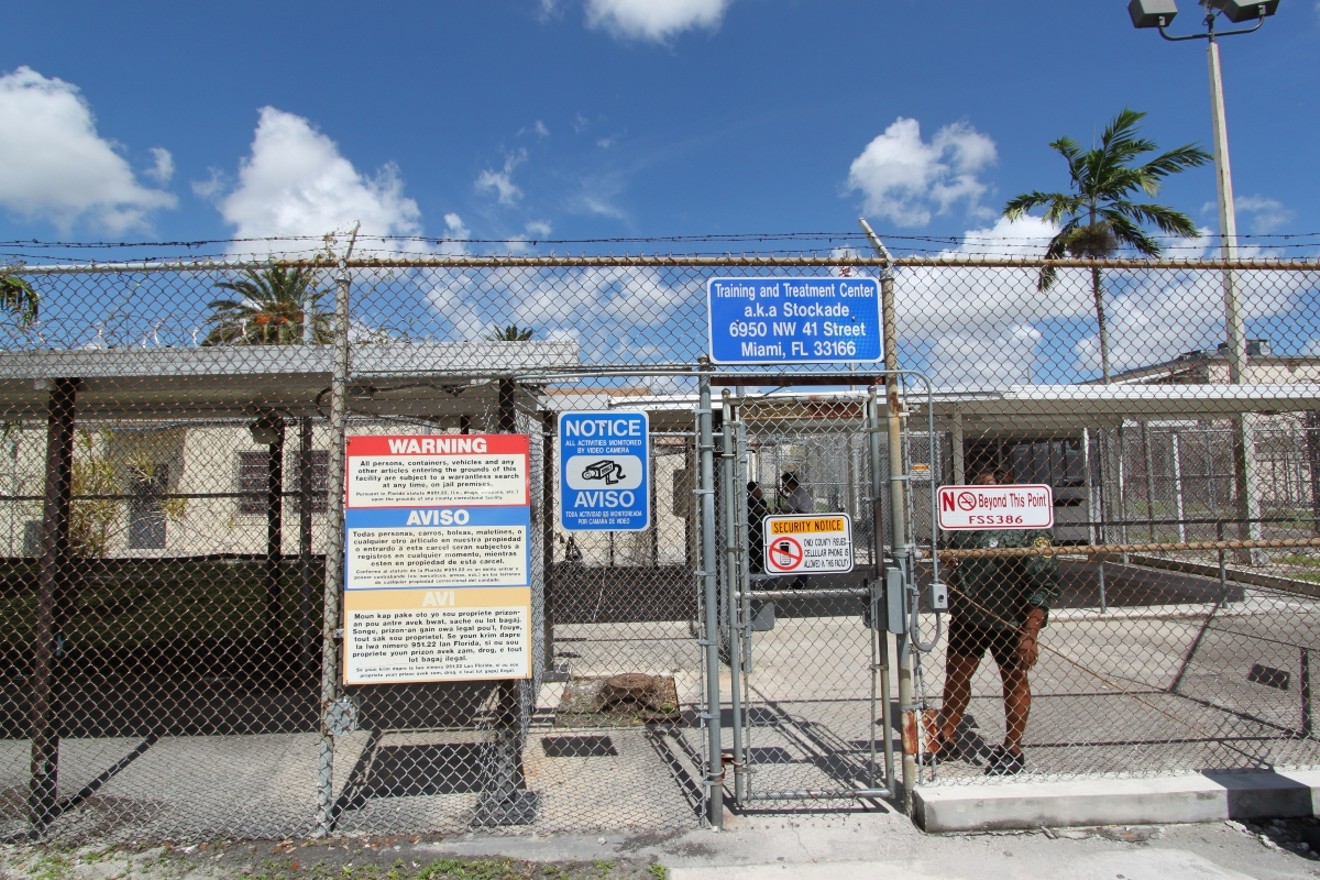 The mayor's office has recommended that the new jail be built on the site of the county's former Training and Treatment Center. Photo by Theo Karantsalis
Miami-Dade Mayor Carlos Gimenez recommends in a new memo that the county build a $393 million megajail at 6950 NW 41st St., near Turner Guilford Knight Correctional Center (TGK).

In the February 13 letter, Gimenez details the project's scope and says the new facility would include the following:
Commissioners will discuss the proposal at their meeting this morning despite the fact that the public agenda makes no mention of the project.

"Because the report was issued on February 13, after the preliminary agenda printed on February 11, the Chairwoman [Audrey Edmonson] has the discretion to add it on as a late item to today's agenda," Patricia Abril, a spokeswoman for the county mayor's office, wrote in an email to New Times.

New Times received no response to emails sent to Gimenez and Commissioners Rebecca Sosa and Jose Diaz for comment on the new jail.
Gimenez's recommendation follows a December 2018 resolution from commissioners, who asked the mayor's office to review the need for a new detention center in Miami-Dade. The county's existing facilities were built between 1959 and 1991 and are considered antiquated and, in some cases, unsafe.

"The facilities... require significant improvements to address not only the aging infrastructure, but also to meet modern standards for inmate medical and mental health care, suicide prevention, and rehabilitative programs," the new memo states.

The mayor's office recommends the new jail be built on the site of the county's former Training and Treatment Center, which was built in 1951 and closed in 2016. It would improve inmate housing conditions by replacing the county's oldest facility, the Pretrial Detention Center, at 1321 NW 13th St.

Once the new jail is up, the Pretrial Detention Center would be demolished and the remaining three acres would "greatly increase development options" for the Civic Center area, Gimenez wrote.

The proposed plans could result in 496 staff layoffs at TGK and Metro West Detention Center, according to Gimenez. Miami-Dade Corrections employs 3,058 staffers. (Corrections spokesperson Juan Diasgranados says if the new jail project is approved, the agency would slow down on hiring to lessen the impact of future job losses. He says corrections already loses about 100 staffers per year and that many positions could be eliminated through attrition, not layoffs.)

County officials had originally considered a public-private partnership using private sector funding to design, construct, or maintain any or all of the county jails. However, the county deemed it was not "financially beneficial" for corrections' maintenance operations to be privatized, the memo shows.

Taxpayers might save $49 million per year on operating costs at the aging Pretrial Detention Center, according to Gimenez, who said that amount would be enough to allow the issuance of county bonds to pay for estimated construction costs of $393 million.

The mayor's proposal is likely to stir a debate about the location of the new jail and the need for it. The Dream Defenders, an activist group fighting racial injustice in Florida, has said a new detention center would create a financial incentive for more people to be jailed.

Others worry the proposal has been shrouded in secrecy.

"Not one person has reached out to me from the county," says Village of Virginia Gardens Mayor Spencer Deno IV. "Virginia Gardens is already dealing with corrections releasing detainees at all hours of the night, and they have nowhere to go."

Public transportation from TGK ends at 9 p.m., and Deno says inmates released at night often wander into his village's parks and other areas to wash up. The mayor says he wants answers about the new jail from county officials who are expected to attend a council meeting next month and share additional details. (Diasgranados says an average of 15 inmates per day are released from detention at the county courthouse, so the new facility — which would contain courtrooms — would likely result in an additional 15 inmate releases per day in the area.)

Miami Springs has made unsuccessful attempts to annex a swath of land west of Miami International Airport that abuts TGK. Throughout the process, the city assured residents the jail would remain on county property.

An email from New Times seeking comment on the new jail from the Miami Springs mayor and its city council was not returned.

This story has been updated to include responses from Miami-Dade Corrections.
KEEP MIAMI NEW TIMES FREE... Since we started Miami New Times, it has been defined as the free, independent voice of Miami, and we'd like to keep it that way. With local media under siege, it's more important than ever for us to rally support behind funding our local journalism. You can help by participating in our "I Support" program, allowing us to keep offering readers access to our incisive coverage of local news, food and culture with no paywalls.
Make a one-time donation today for as little as $1.