Ex-Proud Boy Gabriel Garcia outside Miami's Federal Detention Center at an event to "commemorate" the first anniversary of the January 6, 2021, Capitol riot Photo by Michele Eve Sandberg
Update published October 31, 2022 3:25 p.m.: After publication of this story, the Miami-Dade County Elections Department issued a statement saying that Gabriel Garcia is on the county's volunteer standby list and is not currently assigned to a polling location.

Miami-Dade County requires that poll volunteers during elections pledge to be "respectful of all voters" and to "remain nonpartisan," but at least one high-profile volunteer has cast some doubt on his desire to follow those rules. 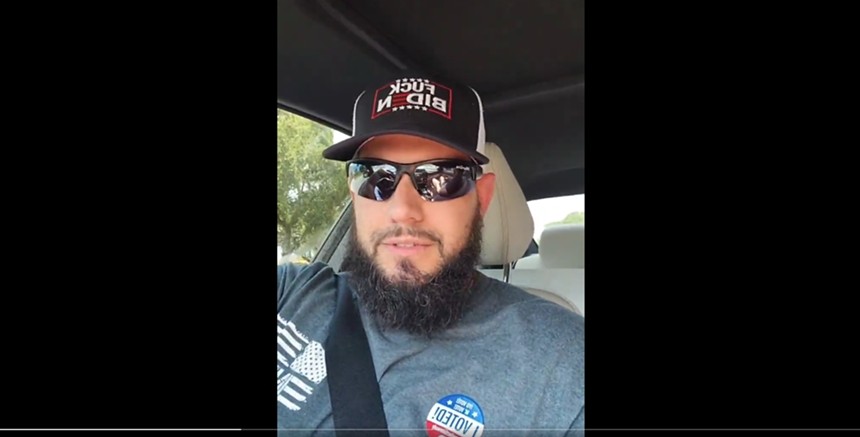 January 6 defendant Gabriel Garcia shares on Telegram that he'll be working the polls in Miami on Election Day, November 8.
Screenshot from Floridians FIRST via Telegram
Garcia, a former U.S. Army captain, currently faces six federal charges for his alleged involvement in the January 6, 2021 insurrection, when a group of rioters stormed the U.S. Capitol Building to interrupt the certification of votes for the 2020 election of President Joe Biden.

Garcia was arrested by federal authorities on January 19, 2021. According to the FBI, he filmed himself entering the Capitol while sporting a red Make America Great Again cap as he taunted House Speaker Nancy Pelosi to "come out and play" and called U.S. Capitol Police "fucking traitors."

He pleaded not guilty to the charges and was granted pretrial release last year with the requirement he wear an ankle monitor.

Garcia's attorney did not respond to a request for comment from New Times on Friday.

According to Suzy Trutie, deputy supervisor of elections for Miami-Dade County, Garcia is listed as a volunteer for an elections inspector position at a Westchester-area voting precinct on November 8.

When asked how the county ensures that poll workers remain nonpartisan and impartial, Trutie tells New Times there will be county elections specialists in charge of each voting location who will strive to ensure all volunteers are following rules and to remove those who break them.

"It's the responsibility of the person in charge of the polling place to make sure everything is going according to state law and county ordinances and policies, and to make sure poll workers are being impartial," Trutie says.

According to researcher Michael Jensen, more than 75 of the Jan. 6 riot defendants had ties to the Proud Boys, a far-right group designated by the Southern Poverty Law Center as a hate group. Enrique Tarrio of Miami, the Proud Boys chairman at the time, was charged with seditious conspiracy alongside four other Proud Boys for allegedly organizing and mobilizing the attack on the Capitol Building.

Garcia isn't the only person associated with the Proud Boys who will be checking in voters on election day next week.

Christopher Barcenas and Nowell Salgeuiro were also confirmed by Trutie to be volunteer poll workers.

Barcenas, a South Florida real estate agent, will be volunteering at a Coral Gables precinct, according to the supervisor of elections office.

Barcenas reportedly protested outside the Capitol on January 6 but did not enter, and voluntarily testified to the U.S. House committee on the January 6 attack. Reached by New Times over the phone Friday, Barcenas says he left the Proud Boys this past April.

He says he will be working the polls to make sure the voting process is "legitimate and fair." Asked about how his involvement in the "Stop the Steal" movement on January 6 may affect his ability to be impartial, Barcenas says he will be able to maintain neutrality on election day.

"It’s just completely different. It doesn’t interfere with me being a poll worker. The integrity of the elections comes down to the people working them," Barcenas tells New Times.

The other Proud Boy-associated poll worker is no stranger to election work in Miami this year. Vice City member Nowell Salgueiro worked as a poll clerk during the midterm primary election this August 23, catching national media attention.

Salgueiro is back at it again for this November's midterms — he's scheduled to be a clerk at a precinct near University Park. As a clerk, Salgueiro will help supervise the precinct and complete the required paperwork before polls open and after they close.

Salgueiro did not respond to a request for comment from New Times left with his family on Friday.
KEEP MIAMI NEW TIMES FREE... Since we started Miami New Times, it has been defined as the free, independent voice of Miami, and we'd like to keep it that way. With local media under siege, it's more important than ever for us to rally support behind funding our local journalism. You can help by participating in our "I Support" program, allowing us to keep offering readers access to our incisive coverage of local news, food and culture with no paywalls.
Make a one-time donation today for as little as $1.