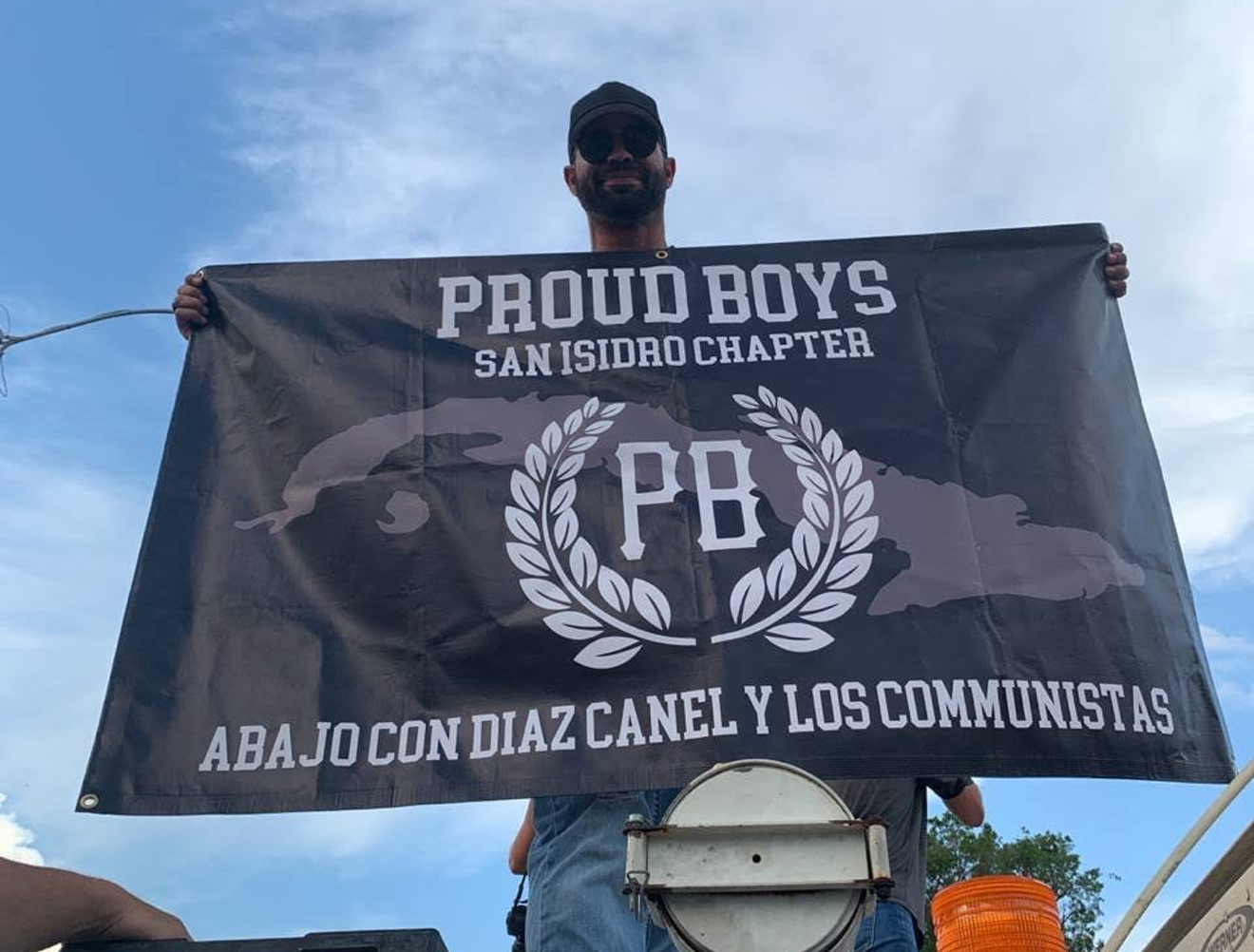 At a meeting on the night of Tuesday, August 3, several founding members of the "Vice City" Proud Boys chapter, which encompasses Miami-Dade County, voted to leave the chapter and create their own, Tarrio tells New Times. Now, more than half of the group's original members have split off to form a new Proud Boys branch, which will split territory with the remaining Vice City members. The name of the new chapter has yet to be announced.

"Personalities clash, but eventually that’s actually a good thing in the end,” Tarrio says, pointing to larger metropolitan areas, such as New York City, which currently has six chapters. “We have a bigger chapter, and this is just part of the growth spurt."

Tarrio wouldn't divulge specific details of the conflict that led to the split, citing new organization rules that prohibit members from discussing club business with outsiders. But he alluded to disagreements over what kinds of "activism" the club should be involved in, as well as personality differences between new members and old.

But a former Proud Boys member of the Vice City chapter, who spoke with New Times on the condition that his name not be published, says it’s the organization's growing public profile and frequent association with political violence that has pushed it further into radicalized territory, and created schisms among local members. He says newer members club have a greater penchant for starting conflict, as more ethnonationalists and violent groups infiltrate the group.

"The Vice City chapter is full of straight-up thuggery, Mafia gangster crap," the former member tells New Times. "In July they had five guys in the vetting process who are active members of the Latin Kings. You’ve got chapters — and unfortunately, the rest of us don’t condone this — where Nazis have gotten in. They don’t recognize Proud Boys leadership, but who is gonna tell ’em no?"

Tarrio contends that these more violent groups haven’t entered the Proud Boys, citing an organizational bylaw that forbids active members of gangs and ethnonationalist groups from joining. He says former members of these kinds of groups would be able to join, but they'd be highly scrutinized.

Still, Tarrio admits, the group has seen an influx of members following the January 6 insurrection at the U.S. Capitol — which led to the arrests of several Proud Boys members — that has caused him to question the motives of new initiates.

"We’re very careful with people who want to join the Proud Boys after January 6. It's kinda strange to me personally. I think it's newer people that think we’re more like a Trump group,” Tarrio says. “The majority of Proud Boys are Trump supporters, but it’s not a political group.”

The former member echoes Tarrio's sentiment that Proud Boys was not meant to be political.

"We’re a drinking club. You get together once a week and grab a beer and a burger and you don't worry about getting bitched at at home," he says.

The Proud Boys were founded in 2016 as a largely pro-Donald Trump fraternal organization, whose members describe themselves as "Western chauvinists" and "anti-white guilt." The Southern Poverty Law Center labeled the Proud Boys a hate group in 2018, and several of its members, including founder Gavin McInnes, have espoused racist and anti-Semitic beliefs. The group has been associated with political violence, as members have brawled with anti-fascist protesters throughout the U.S.

Tarrio says some members of the Vice City chapter want to be more public with their “activism,” as he calls it, by running for local office and divulging their status as Proud Boys, while others want to stay low-key. Tarrio himself announced that he would be stepping down as Proud Boys chairman later this year to pursue efforts in local politics. Tarrio tells New Times he will announce the details of his political plans soon. In 2020, Tarrio unsuccessfully ran to unseat Democratic Congresswoman Donna Shalala.

This split comes three days after an internal July 31 vote to remove Tarrio from the Vice City chapter.

Reuters reported in January that court documents revealed Tarrio had cooperated with local and federal law enforcement in 2012 to help prosecute people in cases involving drugs, gambling, and human smuggling. Tarrio initially denied the claims entirely in January but now admits to having cooperated with authorities in 2012, though he says he is not currently working with any government agencies.

Some members of Tarrio's original Miami chapter have latched onto the idea that he misled the group and is currently feeding information to the federal government.

A screenshot from a public chat on the messaging app Telegram obtained by New Times shows members of the Vice City chapter initiating a vote to disavow Tarrio for his role as a federal informant last Saturday, July 31. A screenshot of the partial vote was leaked onto a public Telegram channel of a group called "Murder the Media." 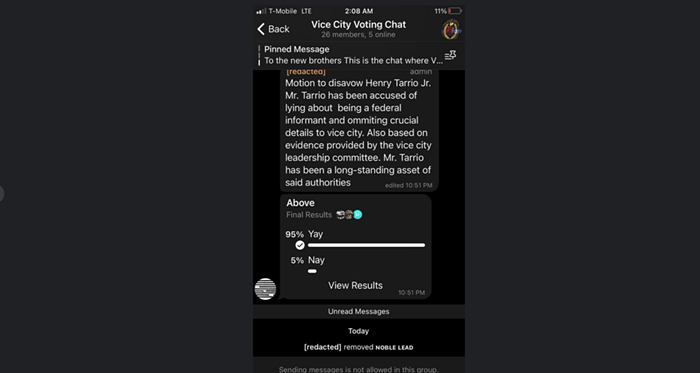 A screenshot leaked from a private Proud Boys chat shows some members voted to disavow Chairman Enrique Tarrio from the Miami chapter.
Screenshot from Murder the Media Telegram
In screenshots from Proud Boys Telegram channels obtained by the Institute for Research and Education on Human Rights, Proud Boys members from several chapters called Tarrio a "rat" and a "snitch," urging others to disavow him. Some members also criticized Tarrio for allegedly failing to support Proud Boys members who were arrested for their part in the January 6 insurrection.

A screenshot of the poll showed that 95 percent of the group had voted to remove Tarrio from the Vice City chapter, but the poll was taken down after the screenshot leaked. According to Tarrio, members opted instead for an in-person vote, where they voted not to remove him.

Though the vote to remove Tarrio from the chapter is purported to have been predicated on his past as an informant, Tarrio feels it was more of a front to forward an agenda of members who had deeper disagreements with the group at large.

"I think [my past as an informant] was used as a way to gain an argument. When you’re angry at people, you grasp at every straw," Tarrio opines. "If they had a problem with it, they would've had a problem in January and February when the story came out."

Tarrio says tensions were initially high between members who opted to leave Vice City and those who stayed, but at this point the two factions are amicable. When he steps down as chairman for the larger Proud Boys organization, he says he may join the new chapter because it's made up of founding members who are Tarrio's older friends within the Proud Boys.

Although he has been the target of much of the vitriol amid the internal conflict, Tarrio says the rift isn't likely to harm the larger organization or cause it to fall apart, as many have been quick to suggest in the past.

"Looking back at all the articles — 'The Rise and Fall of the Proud Boys,' 'The Proud Boys Are Splintering,' 'End of The Proud Boys' — there's 15 to 20 articles like that from 2017 to now,” Tarrio says. “But we're always gonna grow."
KEEP MIAMI NEW TIMES FREE... Since we started Miami New Times, it has been defined as the free, independent voice of Miami, and we'd like to keep it that way. With local media under siege, it's more important than ever for us to rally support behind funding our local journalism. You can help by participating in our "I Support" program, allowing us to keep offering readers access to our incisive coverage of local news, food and culture with no paywalls.
Make a one-time donation today for as little as $1.