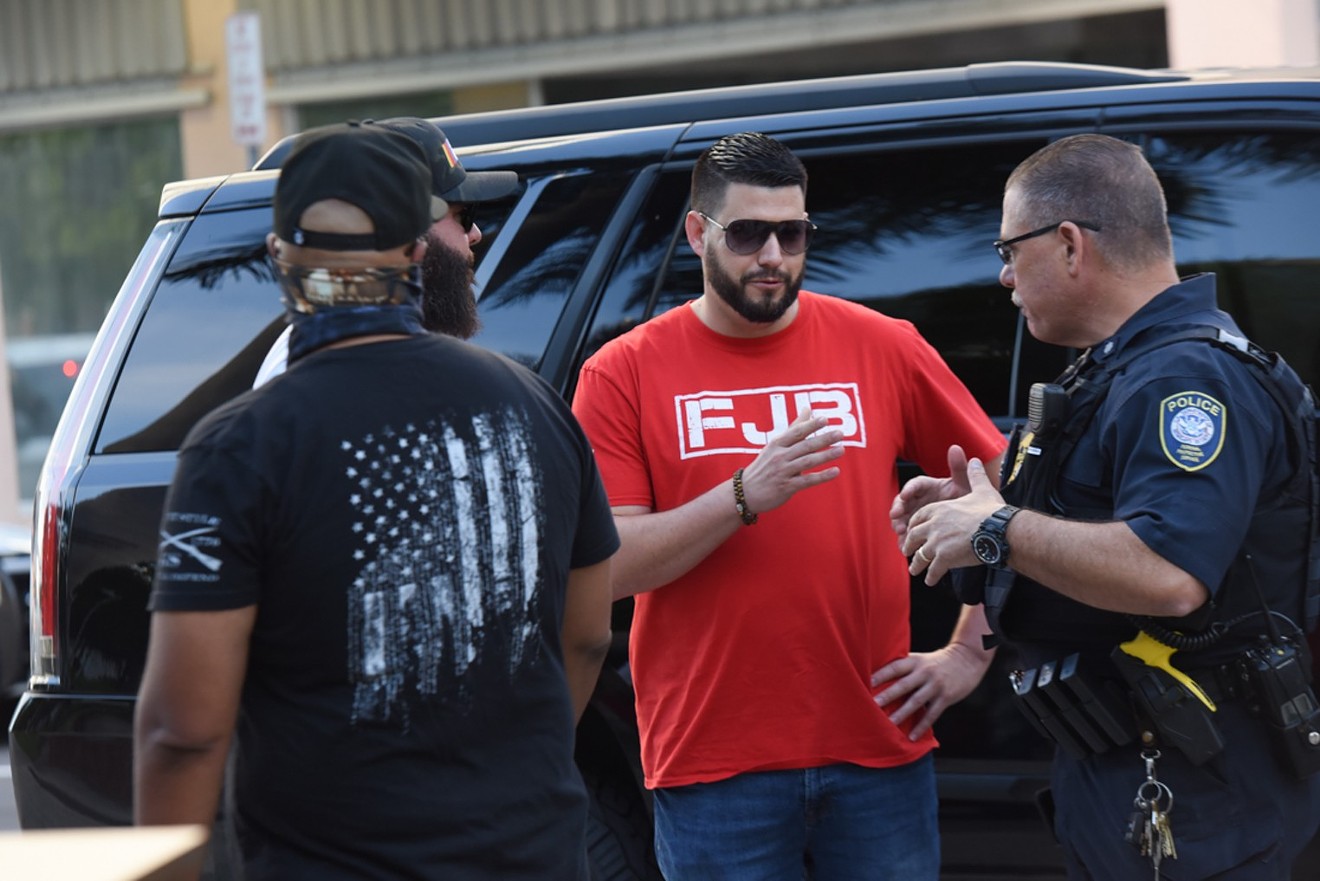 Former Proud Boy Gabriel Garcia gathered outside Miami's Federal Detention Center to "commemorate" January 6 on the one-year anniversary. Photo by Michele Eve Sandberg
Some say the best way to make a big change is to start small. This appears to be the latest strategy of a local branch of far-right Proud Boys organization, which, over the past two years, has somewhat quietly infiltrated the ranks of the Republican Party's local governing body, the Miami-Dade Republican Executive Committee.

As several of the group's members are facing charges in connection with the January 6, 2021, attack on the U.S. Capitol, at least a half-dozen current and former Proud Boys have managed to secure seats within the 125-member committee in an attempt to shape local politics from the inside, according to a New York Times story published earlier this month. The Times piece, by Patricia Mazzei and Alan Feuer, spotlighted how the far-right nationalist group has "destabilized and dramatically reshaped" a once-conservative and buttoned-up Miami-Dade Republican Party.

Committee chairman Rene Garcia did not respond to New Times' request for comment, and it's unclear whether the national coverage will lead to any changes.

Listed in alphabetical order, here are five current or former Proud Boys who are listed on the Miami-Dade Republican Party's member roster, a copy of which was obtained by New Times and attached at the end of this story.

Local real estate agent Chris Barcenas was identified by the New York Times as a Proud Boy. He describes himself on Twitter as a "Miami conservative and crypto enthusiast" and told the Times that he first considered running for a seat on the committee about a year ago. Although Barcenas protested at the U.S. Capitol on January 6, he reportedly did not enter the building and has not been charged with any crimes. He also voluntarily testified to the January 6 committee several months ago about his understanding of the Proud Boys' role in the events.

"They asked me questions like where do I get my news from and if I thought the election was stolen. They want to demonize conservatives for...beliefs different from their own," Barcenas recently tweeted. "God forbid I like @TuckerCarlson."


Also present on the Trump camp: Proud Boys members. I spoke to one, Pedro Barrios (in highlighter yellow). “They say we’re white supremacists, but look at me, I’m a tan Latino, son of Cubans,” he said, adding he migrated to the U.S. from Cuba at age 9. “We’re just anti-Communist” pic.twitter.com/5i3MDxZMwz

Pedro Barrios, a South Florida psychologist previously identified by the Miami Herald as a member of the Proud Boys, billed himself as "the most hard-line Republican in the race" in 2020 while running for a South Florida state house seat that covers the areas of Doral, Sweetwater, Naples, and a small portion of Miramar. "They say we’re white supremacists, but look at me, I’m a tan Latino, son of Cubans," Barrios told Herald reporter Jimena Tavel during a pro-Trump rally outside the Cuban restaurant La Carreta in November 2020. "We’re just anti-Communist[.]"

Barrios was eliminated in the August 2020 Republican primary.

Gilbert Fonticoba is one of many Proud Boys who were charged with obstructing justice after allegedly entering the Capitol building alongside other rioters on January 6, 2021. He's awaiting trial.

Fonticoba is a longtime Proud Boy and member of Miami-Dade's Vice City chapter, which was founded by former group chairman Enrique Tarrio and no longer recognized by Proud Boys national leadership after the group split in two over internal disputes last year. Fonticoba was previously spotlighted in a December 2018 New Times feature story that noted his conspiratorial beliefs about "QAnon — the bizarre theory that alleges a person named Q, who claims to be a government insider, is trying to expose efforts by the so-called deep state."

Gabriel Garcia, a former U.S. Army captain and onetime leader of the Vice City chapter of the Proud Boys, claims in the Times piece to have parted ways with the extremist group, although it's unclear when. Garcia was charged with a felony for interfering with law enforcement during the January 6 riot after he filmed himself entering the Capitol while exclaiming "Nancy [Pelosi], come out and play!" and calling officers of the U.S. Capitol Police who tried to stop the rioters "fucking traitors."

Freed on bail, Garcia requested that his GPS ankle monitor be removed because he found the beeping noises "embarrassing." In January, he and dozens of others gathered outside Miami's Federal Detention Center to "commemorate" January 6, where Garcia compared the January 6 attack on the U.S. Capitol to the George Floyd protests in the summer of 2020. "[The former] led to $30 million in damages, the other $2 billion — but you don't see too many people from [the Floyd demonstrations] being held accountable,"

Second image of Nowell being served a restraining order outside the @MiamiDadeGOP REC meeting captured by @tomaskenn. pic.twitter.com/wxep0d7i3l

Photos shared on Twitter by the group Miami Against Fascism purport to show Nowell Salgueiro in Proud Boys swag. He was also identified as a group member in the Times' investigation. According to public records, Salgueiro owned a Florida company called Deplorable Troll USA LLC until last year and currently owns two others: Strategem Kings Inc and "Cold Concepts Refrigeration & Air Conditioning Corp.

Court records show that Salgueiro was arrested for battery on an Orlando police officer in 2007, was arrested for trespassing after a warning in 2010, and has two restraining orders against him involving stalking and "dating violence" cases, the latest of which was served in late April. Salgueiro has not been charged with any crimes in connection with the January 6 attack, and there is no evidence that he was present at the Capitol that day.

A 2021-2022 Republican Executive Committee roster obtained by New Times includes the names of several current and former Proud Boys.
obtained by New Times
KEEP MIAMI NEW TIMES FREE... Since we started Miami New Times, it has been defined as the free, independent voice of Miami, and we'd like to keep it that way. With local media under siege, it's more important than ever for us to rally support behind funding our local journalism. You can help by participating in our "I Support" program, allowing us to keep offering readers access to our incisive coverage of local news, food and culture with no paywalls.
Make a one-time donation today for as little as $1.