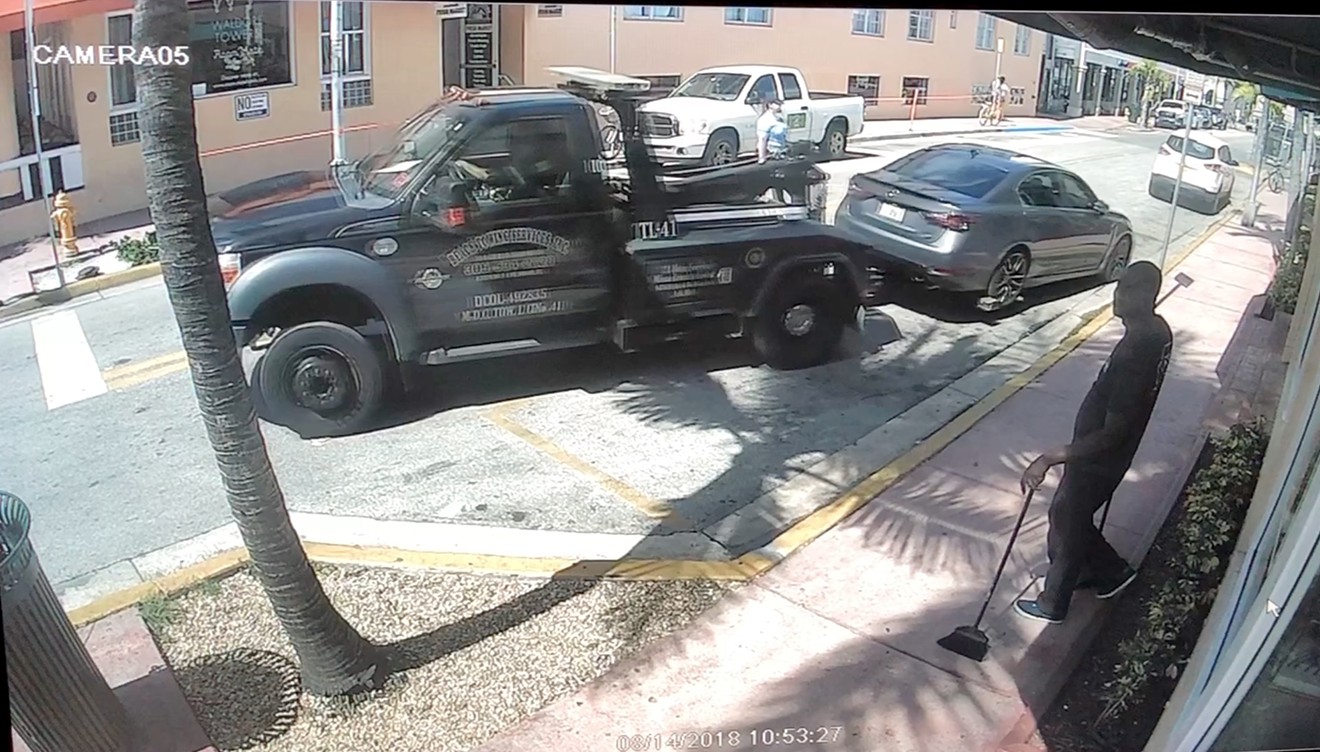 Courtesy of Allyn Alford
This past Sunday, Alexandra Ferreira's teenage daughter took her first solo trip from Hollywood to Miami Beach for Art Basel. But it ended up costing the family a lot more than expected. The 16-year old parked her parents' car in a Citibank parking lot on Washington Avenue around 4 p.m. on Sunday (when the bank was closed and no customers were using the lot).

When she and a friend returned two hours later, it was gone.

The young woman, whom New Times is not naming at her parents' request, had to use her friend's parent's Uber account to get a ride to Beach Towing, where the two were then told they had to pay $283 in cash to get the car back, Ferreira told New Times. Miami Beach's Towing Bill of Rights requires tow companies to accept at least two forms of payment.

However, being a 16-year-old girl, she didn't have almost $300 in cash on hand, nor did she have any way to withdraw that amount of money from an ATM. Ferreira sent her daughter's friend the money via Venmo, and the friend was able to withdraw the money and get the car back.

Dozens of people get their cars towed every day in Miami Beach, where the only two licensed tow companies — Tremont Towing and Beach Towing — essentially have a monopoly on tows within the city; they snap up wrongly parked cars within minutes and charge steep prices.

This past August, after a man proved Beach Towing had not used a dolly or flatbed when they picked up his vehicle, Miami Beach Parking Director Saul Frances said, "Moving forward, both towing service providers, Beach Towing and Tremont Towing, may only assess a flatbed/dollies fees when it is engaged at the scene of the tow while in the presence of a city agent for their notation."

Asked whether there was a city agent present at the time Ferreira's car was towed, Ralph Andrade, an attorney for Beach Towing, said, "I will investigate this matter and get back to you. But before I do, can you tell me if you ever plan to run a story on all the positive things Beach Towing does for the community, like holiday lunches for seniors and toy drives for children?" He then sent a flier advertising a senior Christmas lunch on December 11 that was hosted by South Florida Seniors in Action and sponsored by Beach Towing and Miami Beach Medical Group.

A spokesperson for the City of Miami Beach later shared an email from City Parking Director Frances with New Times that states the city has a representative present for tows on city streets only. That rule did not apply in the case of the 16 year old's tow, since it occurred on private property.

As far as Ferreira's allegation that her daughter was forced to pay cash, thus violating city law, Andrade stated: "The “cash only” allegation is simply not true. The towing bill of rights states that “[t]owing companies must provide at least two options for payment: cash, money orders, travelers’ checks, or personal checks.” Beach Towing accepts all four forms of payments. Further, I have reviewed an email sent to the City by Alexandra Ferreira concerning the tow at issue. Her email reveals that the driver in possession of the subject vehicle had none of the acceptable forms of payment in her possession. Thus, it appears it is the driver of the vehicle that was able to make a “cash only” payment. Beach Towing acted in full compliance with Florida and Miami Beach law (and administrative rules and regulations) in connection with this lawful tow."

Miami Beach's Frances said the city commission is pondering having both tow companies in the city accept credit cards.

"With regard to credit-card acceptance, this is a policy issue the City Commission is considering," Frances said in a statement sent to New Times. Please note both towing agencies are required to have an ATM on site. The City Commission mandates a maximum ATM fee of $1.50 per transaction. ATMs may process debit and credit card transactions."
KEEP MIAMI NEW TIMES FREE... Since we started Miami New Times, it has been defined as the free, independent voice of Miami, and we'd like to keep it that way. With local media under siege, it's more important than ever for us to rally support behind funding our local journalism. You can help by participating in our "I Support" program, allowing us to keep offering readers access to our incisive coverage of local news, food and culture with no paywalls.
Make a one-time donation today for as little as $1.