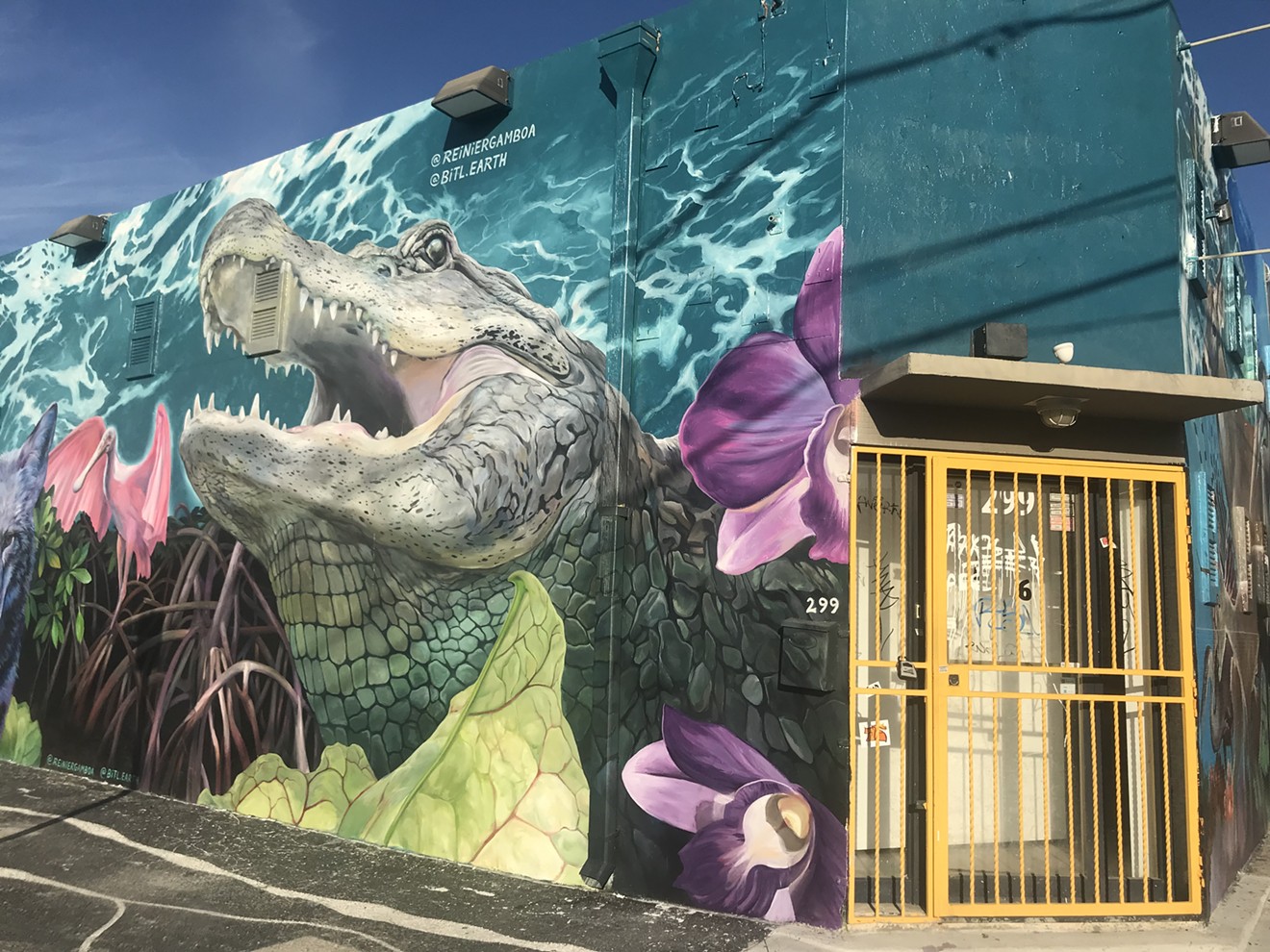 Latest augmented reality mural by Before It's Too Late and Reinier Gamboa. Photo by Meg O'Connor
Walk down NW Third Avenue and 25th Street in Wynwood and you'll be greeted by an alligator, a coyote, a manatee, and more than a dozen other examples of Florida's dwindling biodiversity. The colorful wildlife makes up one of the scores of new murals that appeared in Wynwood this past December.

But there's a lot more to this painting than meets the eye.

The mural uses augmented reality technology. In a few short weeks, passersby will be able to hold their phones up to any animal in the mural and see a short video using a soon-to-be-released app called the Anthropocene Extinction. There will be a video for each animal in the mural featuring music and narration that tells about the sixth mass extinction event, which some scientists say is happening right now and is mainly the result of human activity.
The colorful mural was painted by Miami artist Reinier Gamboa and created by Before It's Too Late, a nonprofit founded by MIT graduate students who use art and technology to ignite a sense of urgency about climate change. It is the second mural the group has created that features augmented reality technology. The first, unveiled last February, is near the train tracks at 1800 N. Miami Ave. It sends a shocking message about the threat sea-level rise poses to Miami. Before It's Too Late's first mural on North Miami Avenue.
Courtesy of Linda Cheung
In the painting, the word Miami is depicted on a beach next to cigarette butts and a caged canary. The AR simulation shows viewers alternate futures. In one, the city is submerged, filled with collapsing structures and pollution. In the other, sustainable future, there are windmills, green infrastructure, and flourishing wildlife.

Both projects were spearheaded by MIT-graduate Linda Cheung, who moved to Miami from New York last year after leaving a career in finance to dedicate her life to a cause. With Before It's Too Late, Cheung seeks to use art and augmented reality to grab people's attention and tap into their empathy, getting a new wave of people to care about climate change. 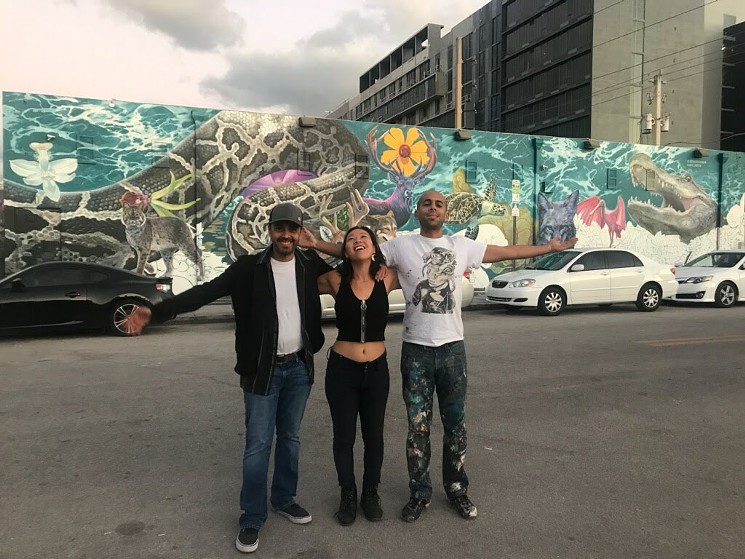 Juan Carlos Gallo, AR designer Linda Cheung, and Reinier Gamboa in front of the mural as it was still being painted
Courtesy of Linda Cheung

"What I really want to do is enact change here in America," Cheung told New Times. "Climate change is often seen by Americans as something that is impacting the rest of the world, not them, but the impact of climate change is much more salient here in Miami."

The stunning murals draw people in; then the augmented reality videos grip them with chilling narratives, visuals, and soundtracks.

"Confronting climate change requires political and social will," Cheung said. "These murals are really about educating and inspiring the public to understand these issues and to raise their voices and demand these changes from corporations and the government." Gamboa working on the mural.
Courtesy of Linda Cheung
The design for the latest mural came about through a collaboration with the owner of the building at NW 25th Street and Third Avenue, who is a veterinarian. Before It's Too Late worked on designs with him, aiming for something that could raise awareness of the impact climate change is having on South Florida and the rest of the world through a local lens. They settled on depicting 25 species that live in South Florida, which Gamboa painstakingly brought to life over the course of a month, painting for up to nine hours a day. Gamboa painted the mural by brush, which gives it a soft, blended look.

For the augmented reality, Before It's Too Late has prepared short educational clips — like the one about Burmese pythons featured on the group's Instagram here — that will play on viewers' phones. At the same, they plan to make use of the 3D space these clips will be played in by having it look like the whole thing is being shown underwater, a nod to the imminent threat of sea-level rise looming over South Florida, with jellyfish and plastic floating around the viewer.

Once the augmented reality aspect of the mural is complete, Cheung will publish an app that can be downloaded from Android and iPhone app stores.

Another section of the mural.
Photo by Meg O'Connor
Though the AR-mapping process is difficult, for Gamboa, the most challenging part of creating the mural was painting the Burmese python. "The references I was using were not very good, so I had to make up some, and by the time I did the head of the snake, I felt like I was losing my mind," Gamboa tells New Times.

Some may question why invasive species like the Burmese python and lionfish are included in the mural. But that's exactly the point.

"For us, this mural is exactly what reality is. It's about the fact that right now in the same space you have invasive species, native species, endangered species, and humans," Cheung said. "We are all inhabiting the same space, and we need to understand the interactions these species have."

Gamboa working on the mural
Courtesy of Linda Cheung
In the mural, Burmese pythons loom large. The augmented reality videos will make clear that the snakes'  exploding population in the Everglades was caused by irresponsible pet owners dumping them there during the 1970s and '80s.

"The real culprit, the real invasive species, is humans because we're the ones who released them," Cheung said. "This mural is about so many things because is not simple. In order to become more thoughtful citizens, we have to accept that the world is multifaceted and everything we do causes an interaction with other parts of the world."
KEEP MIAMI NEW TIMES FREE... Since we started Miami New Times, it has been defined as the free, independent voice of Miami, and we'd like to keep it that way. With local media under siege, it's more important than ever for us to rally support behind funding our local journalism. You can help by participating in our "I Support" program, allowing us to keep offering readers access to our incisive coverage of local news, food and culture with no paywalls.
Make a one-time donation today for as little as $1.