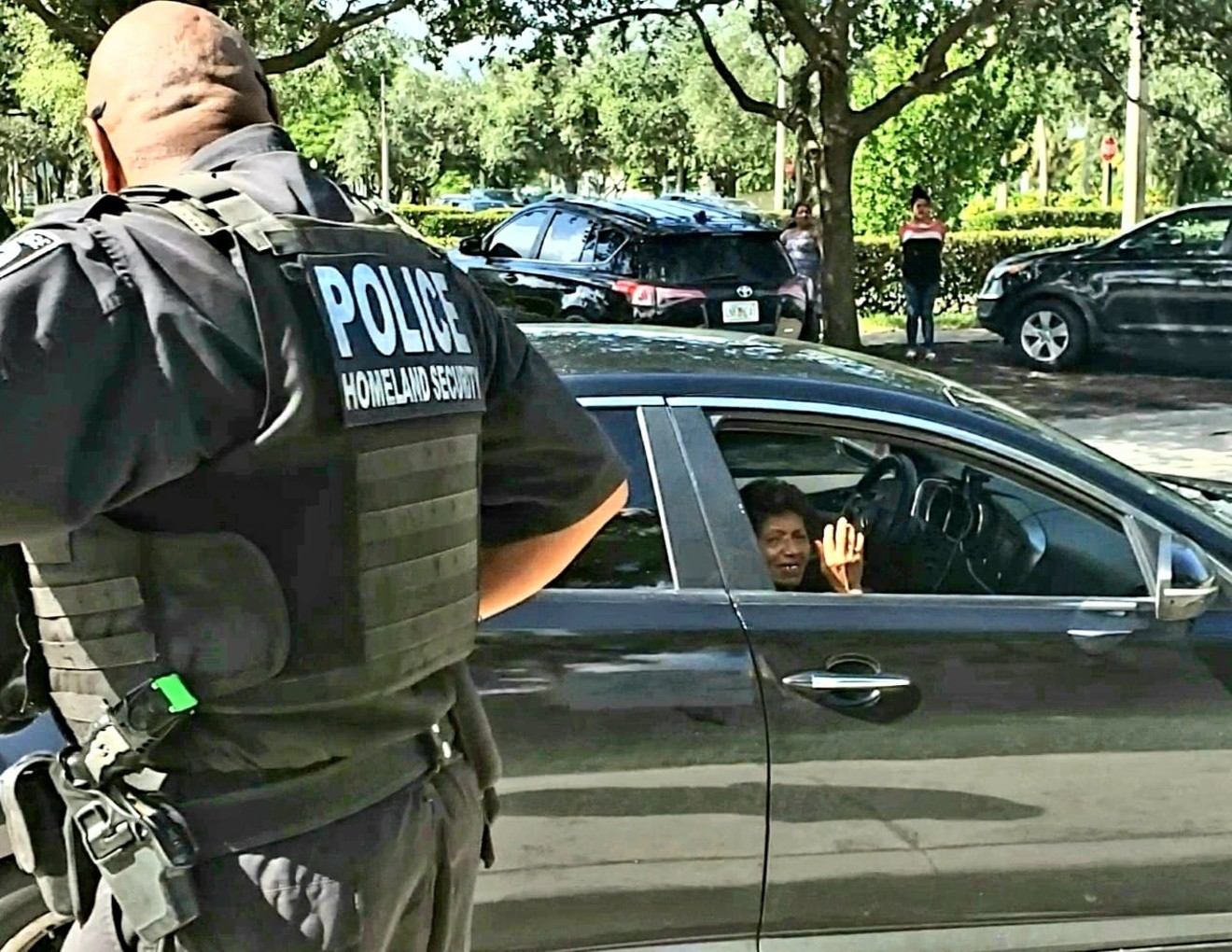 That's according to activists who intervened after they saw officers with the Department of Homeland Security's Federal Protective Service (FPS) demand driver's licenses from people of color who had stopped or slowed in no-park zones, and simply waved on white drivers to move their vehicles.

"I was shocked to see them simply letting white people drive off while stopping people of color," Maria Bilbao, an organizer with the immigration advocacy group United We Dream, tells New Times. "They said what they were doing was legal, but I've never seen this sort of thing happen before."

FPS did not immediately respond to New Times' request for comment.

The Miramar facility is the primary point of access for South Florida immigrants looking to check in with ICE. Lines to enter the facility begin before dawn and sometimes include hundreds of people, yet there's vastly insufficient parking to accommodate such large crowds. The constant flow of cars and pedestrians can make finding a place to park or idle difficult. New Times previously reported that tow truck drivers in the past have circled the lot outside the facility to haul away illegally parked cars.

According to Bilbao, FPS agents were targeting drivers of color who had stopped or slowed in no-park zones. On Twitter, Bilbao posted a video of the incident, in which she can be seen speaking with an FPS agent beside a stopped car. Bilbao is ushered back to the sidewalk by the agents as she asks why they're checking driver's licenses. One agent tells her it's part of their job.

"That's not part of his job," replies Carlos Naranjo, a community organizer with New Florida Majority. "That's never happened before."

Our organizers at the ICE facility in Miramar, Florida found out that DHS is now checking the driver's licenses of the people driving to drop off their family members at the location. They are mostly stopping people of color. #AbolishICE pic.twitter.com/03o7BRGbCM

Bilbao, along with other immigrant-rights activists, visits the facility every week to provide water and other support to immigrants waiting in line for their appointments with ICE. She says she's been going there for more than two years but had never seen DHS officers target drivers. Naranjo took photos of at least two drivers of color stopped by FPS agents. Bilbao says other activists counted as many as five cars stopped. Once Naranjo began filming the incident, the officers apparently stopped pulling people over.

Mark Myers, a staffer from the office of Miramar Democratic Rep. Cindy Polo, says he drove by the ICE facility to drop off water and was asked by FPS officers to move when he slowed his vehicle.

"I can't say that I wasn't stopped because I was a white guy in a tie. I can't be sure what was on the mind of the officer," Myers says. "But I certainly wasn't asked for any information or identification."

Another activist, Glenn Rice, responded to one of Bilbao's Facebook posts about the profiling, echoing Myers' experience. "When I stopped on the side of the road this morning to drop off water, this same 'guard/ICE agent' [sic] tried to be very nice & professional with ME — asked me to 'please pull my car into a parking lot, SIR, if you're going to stay.' He even said thank you to ME!"

Thirteen states offer driver's licenses to undocumented residents. Florida is not one of them. An undocumented person in the Sunshine State could easily end up in deportation proceedings as a result of a traffic stop.

"I was undocumented for 18 years and often had no choice but to drive without a license," Bilbao says. "I know what can happen when you get pulled over while undocumented — it can ruin your life."

Wednesday, agents with Homeland Security's Federal Protective Service stopped drivers of color outside ICE's Miami-area office.
Photo by Carlos Naranjo
Besides that, the alleged racial profiling occurred outside a place where immigrants show up for legal check-ins with ICE. In other words, immigrants at the Miramar facility are there to comply with the law. Activists claim that ICE agents have routinely used the check-ins as a way to apprehend immigrants without warning, but this is apparently the first time FPS officers have requested documentation from people outside the facility.

The ICE office, located just off Miramar Parkway by I-75, has long been plagued by accusations of poor conditions, including insufficient shade outside and only two functioning toilets to accommodate hundreds of immigrants waiting in line. Activists have compared barricades used to fence immigrants to those used to corral farm animals. Bilbao worries FPS officers might use profiling tactics again when there are no activists present.
KEEP MIAMI NEW TIMES FREE... Since we started Miami New Times, it has been defined as the free, independent voice of Miami, and we'd like to keep it that way. With local media under siege, it's more important than ever for us to rally support behind funding our local journalism. You can help by participating in our "I Support" program, allowing us to keep offering readers access to our incisive coverage of local news, food and culture with no paywalls.
Make a one-time donation today for as little as $1.