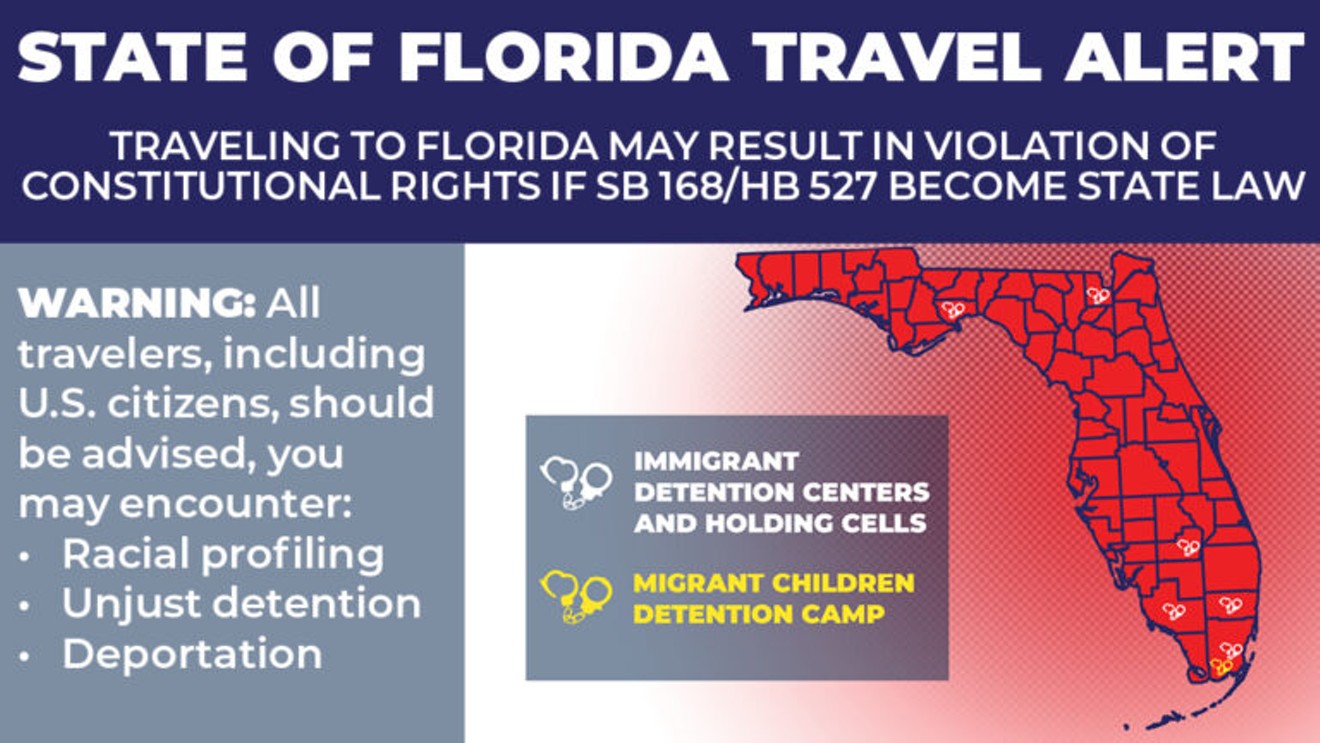 The travel warning put out by the ACLU and other groups. Courtesy of Florida Immigrant Coalition
Florida's main industry has long been tourism. From tax revenues to employment numbers, the Sunshine State depends on people who visit the local attractions.

But for many of those visitors, the trip could be a dangerous one. On Monday, the American Civil Liberties Union, along with other civil rights and immigrants' rights groups, cautioned immigrants and people of color about traveling to Florida. The travel advisory comes in response to two "anti-sanctuary" bills (SB 168 and HB 527) currently moving through the state Legislature that would require local governments to enforce federal immigration law.

"The alert comes amid these bills’ steady progress in the Florida State legislature and cautions both Florida travelers and residents, especially black, brown, and Latinx communities, of the increased likelihood of racial profiling, unjust detention, and possible deportation if these anti-immigrant bills pass," the ACLU of Florida stated in a news release.

The travel warning put out by the ACLU and other groups.
Courtesy of Florida Immigrant Coalition
The travel warning specifically name-checks Miami, an unofficial sanctuary city until January 2017, when Miami-Dade Mayor Carlos Gimenez signaled that the county would comply with federal immigration laws. Fort Lauderdale, West Palm Beach, and Key West are also named in the advisory.

The bills being considered by Florida lawmakers are modeled after anti-immigration laws passed last year by nine states, including Texas, Missouri, and Tennessee. According to emails, the sponsor of the Florida House bill, Rep. Joe Gruters — the state's GOP chair — consulted with and used information from groups linked to white nationalism while drafting the legislation.

Although the bills do not require local police to share information about crime victims or witnesses with federal immigration authorities, immigrants' rights groups are skeptical. The ACLU and other groups that issued the travel advisory say the Florida bills would put immigrants at further risk of violence, since they might be afraid to report crimes to local law enforcement. The groups add that people of color could also be subject to increased racial profiling by officers.

"If either bill becomes law, it would devastate Florida’s communities by increasing the likelihood of racial profiling, diverting local law enforcement resources from safeguarding our communities, and could cost Florida taxpayers millions of dollars and potentially create irreparable damage to immigrant families," the travel alert states.

As of now, the Florida bills have yet to be scheduled for a full floor vote. The Senate bill passed through the Infrastructure and Security Committee, while the House bill has moved to the Judiciary Committee. The state legislative session ends May 3.
KEEP MIAMI NEW TIMES FREE... Since we started Miami New Times, it has been defined as the free, independent voice of Miami, and we'd like to keep it that way. With local media under siege, it's more important than ever for us to rally support behind funding our local journalism. You can help by participating in our "I Support" program, allowing us to keep offering readers access to our incisive coverage of local news, food and culture with no paywalls.
Make a one-time donation today for as little as $1.