Ten Miami Bands to Watch Out For in 2021 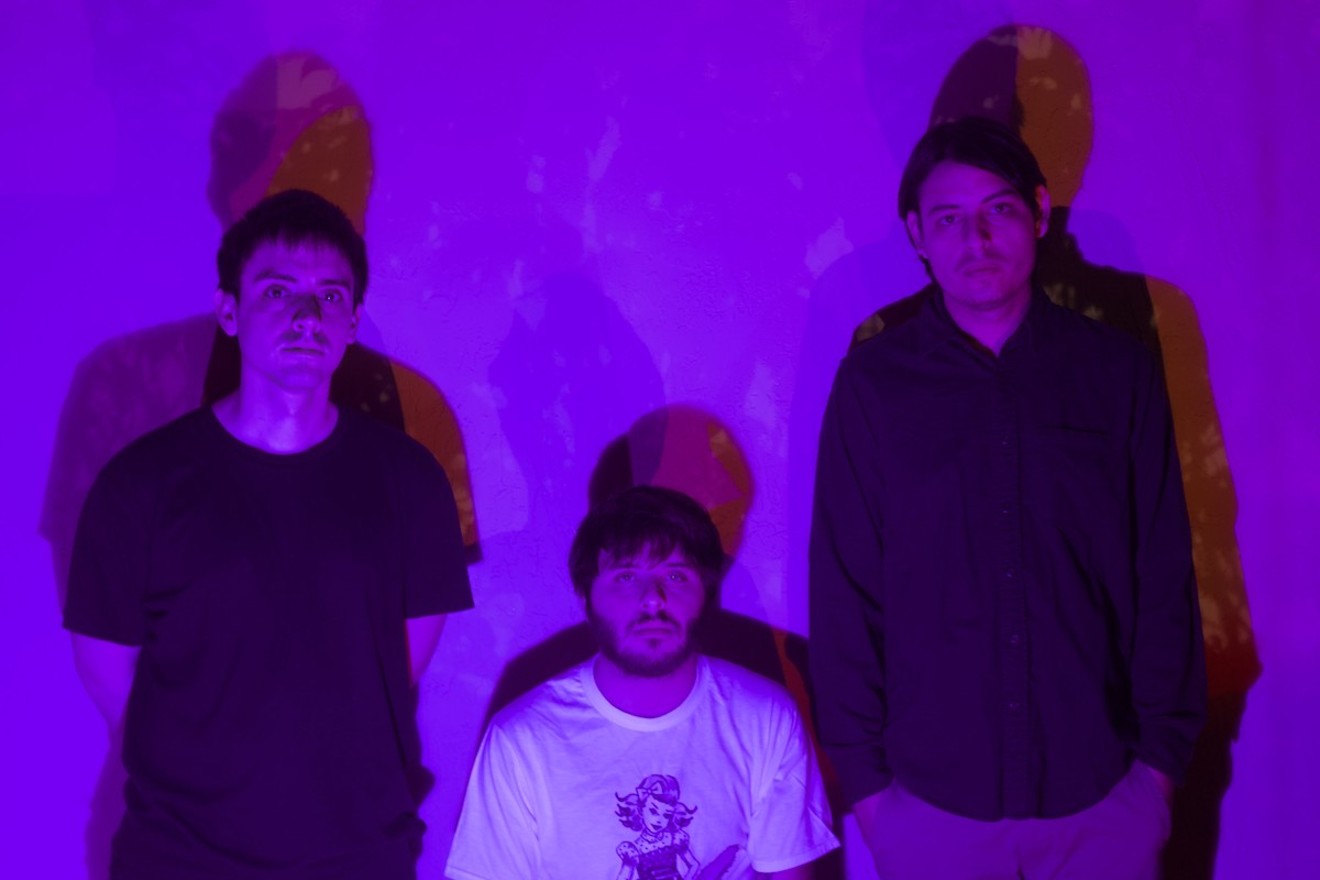 Mold’s music is equal parts fun, fuzz, and mid-'90s grunge. Photo by Duzi Gomez
All the pessimists out there who thought the local music scene was in peril before March 2020 certainly had their worst fears vindicated by the pandemic year. Bars and venues shut down, and quarantine conditions brought shows and tours to a standstill and ruled out just about every form of collaboration.

And yet, with force and tenacity, talented bands spring eternal in South Florida's swampy morass, proving that, much like Miami itself, the music scene refuses to sink. It hasn’t been easy for anyone, but thanks to the emergence of new faces and projects, Miami’s band landscape has remained as uniquely interesting as it has always been.

One of the many beauties of Miami’s bands and their local audience are their mutual willingness to think and play outside the box. All with their own distinctive sounds, the bands listed below are further proof of the Magic City’s openness and enthusiasm.

Here, listed in alphabetical order, are ten acts coming out of the 305 (and slightly beyond) you should keep an eye out for in 2021.

Experimental post-metal outfit Bleeth hit the proverbial ball out of the park with its 2018 album Geomancer, a ripping, stoner-rock elegy. The band continued its run of successes by signing to Ohio-based label Seeing Red Records last year. Now, the trio is bracing itself (and you should too) for its forthcoming effort, Harbinger, an existential meditation on society’s penchant for authoritarianism and the internal struggles that ensue. The release is marked extra-exciting for its slight gear change: Expect a faster-paced sound with particular emphasis on atypical tunings and arrangements. 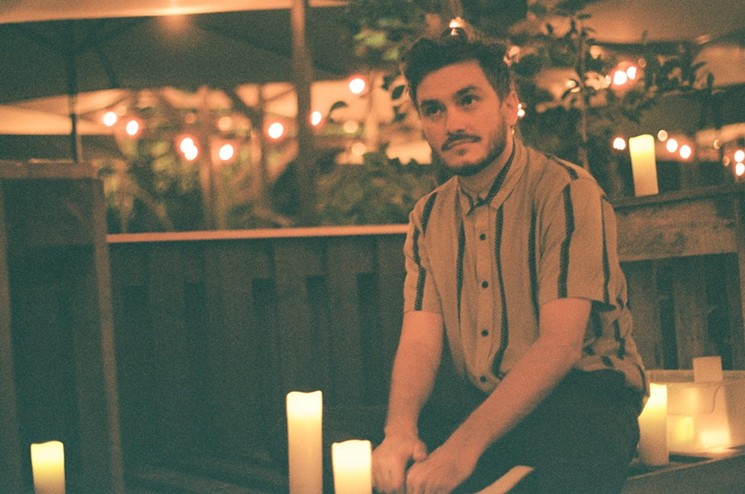 Corey Perez has been operating as the versatile secret weapon of the Miami music scene.
Photo by Bryant Castro

Corey Perez is an indie-rock singer-songwriter and producer who has been operating as the versatile secret weapon of the Miami music scene for the last couple of years. Perez traverses the same well-traveled path as his family before him — his father is the legendary Latin music hitmaker Rudy Perez, while he and his two older siblings formed Price, which at one time was signed to Geffen Records. Recently, Perez has spent time playing with local favorite Rick Moon while cultivating his own sound and practice. Perez is now gearing up to debut his own solo work with the single “Live Like The World Is Ending,” a dreamy anthem and teaser for his forthcoming album, Dog Years, both out later this summer. 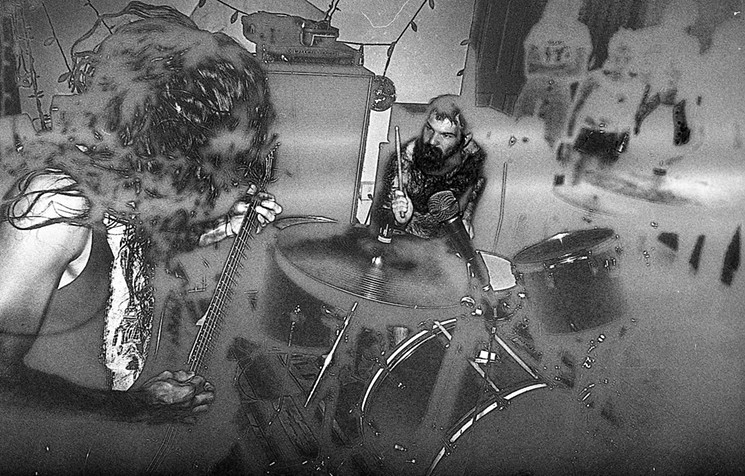 Devalued is unquestionably the best band in Miami.
Photo by Kris Alan Carter

Ask any punk, and they'll tell you Devalued is unquestionably the best band in Miami. Are they grind, hardcore, or punk? Does it really matter? They are the band that you are there for when you drag yourself out to a show on a Tuesday night, whether you know it or not. The intensity and cerebral quality of Devalued's sound could breathe life into any overworked, underpaid five-to-niner. You may have overlooked the band because it hasn't really have not released much, digitally or otherwise, during Devalued's decade-long tenure, making them one of South Florida's best-kept musical secrets. The band is currently sitting on an album recorded at the Bull Productions recording studios in Miami last year, recorded and mixed by Ryan Haft (Torche, Capsule, Jacuzzi Boys), so keep an ear open for that. 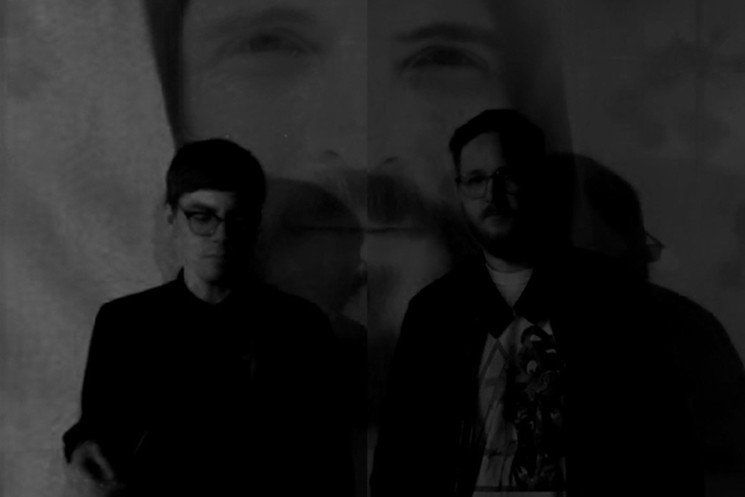 Floorless delivers a sound almost as hard-hitting as a tropical storm.
Photo courtesy of the band

Post-industrial outfit Floorless — made up of Matt Gossman and Mike Donaldson — has been showering Miami with guitar riffs, samplings, and synthesizers since 2018 with a sound almost as hard-hitting as a tropical storm. Before the pandemic, the duo had been sharing stages with artists like Ether Coven, Captured! y Robots, Saavik, and EDKH, but making good on their downtime, released their first self-titled EP in April last year. It's a tropigoth's dream — a mechanical, rageful score for a plague-torn world. The band is currently finishing up work on its forthcoming full-length debut, Telepath.
click to enlarge 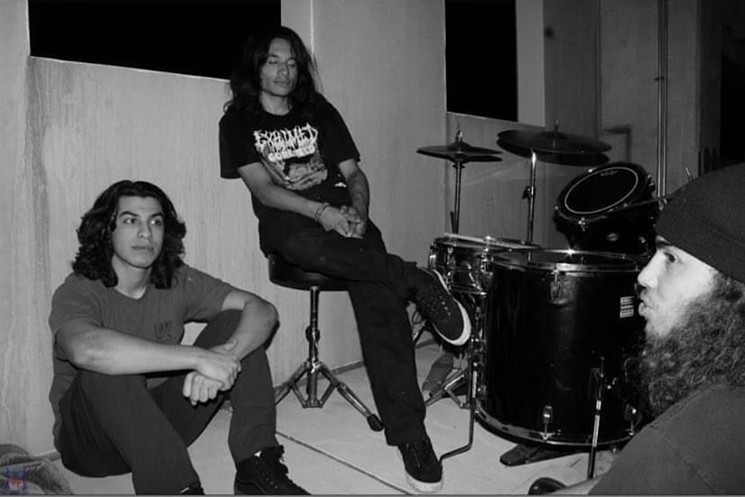 Headfoam released its first two singles in the midst of the pandemic.
Photo courtesy of the band

After meeting at North Trail Skatepark in 2017, Alex Noel, Red Rivera, and Louie Collazos started the psychedelic thrash-punk outfit Headfoam. Releasing its first two singles, "Rolling In" and "Lightweight," in the midst of the pandemic, the band delivered its sonic annihilation via Bandcamp instead of live shows, perfectly transcribing its '80s-influenced high-energy ethos to the digital realm. “Lightweight,” from the upcoming self-titled album out this summer, is a standout single, a Bad-Brains-meets-Circle-Jerk ode recorded by sound engineer and all-around fuzz expert Jonathan Nuñez (Torche) at Sound Artillery Studio. Headfoam's debut full-length, which the band is also collaborating with Nuñez on, is currently in the works. 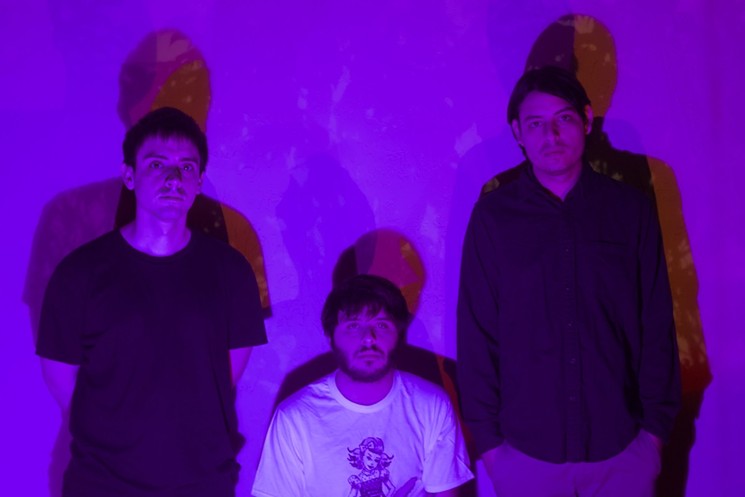 Self-described as anxiety-infused psych-noise rock, Mold is a three-piece collective helmed by Carlo Barbacci, a Peruvian transplant with a refreshing amount of enthusiasm for the local music scene. Mold’s music is equal parts fun, fuzz, and mid-'90s grunge — think Jane's Addiction with a psychedelic finesse. The band's debut full-length album, No Silence, is expected to be released this summer. It’s an endeavor into which the band has poured its pent-up work ethic, which is normally spent playing shows across South Florida.

Pavlov's Bell puts out some of the coolest instrumental, conceptual, long-form music coming out of Miami.
Photo courtesy of the band

Pavlov's Bell consists of Antonio Pereira, Francisco Lujan, and David Hidalgo, and together they make some of the coolest instrumental, conceptual, long-form music coming out of Miami. It's abstract but not aggressively so, with clever musicianship that simply melts into the ear. The collective’s output comes across almost like a study in sound and rhythm, and it is done expressly so. As Francisco says of the outfit’s conception, “It was created out of a desire for experimentation that challenges the expectation of what music can be." The band's sophomore effort, Mala Nota, is available to stream now, and the forthcoming release, Mala Nota Live, out on March 12, giving listeners a reimagining of the record brought to life at the Mala Nota Gala, a private event hosted by the band during the pandemic. 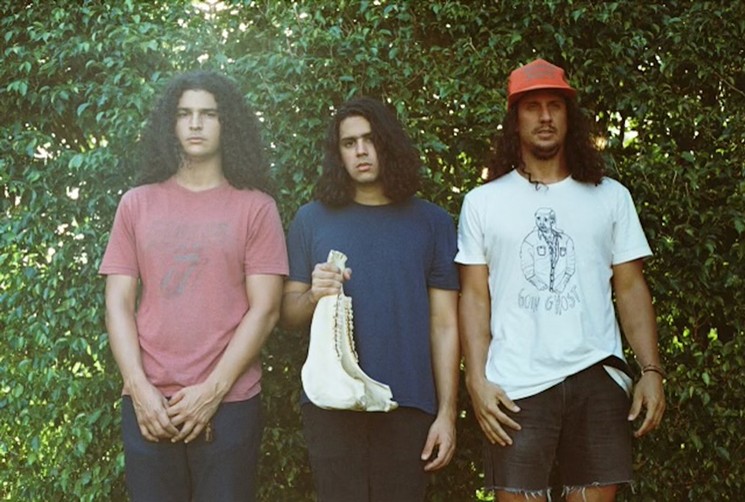 Suyos is set to debut Miami label Mango Hill Records this summer with its single "Free Again." Juan Ledesma, Jason Mavila, and Rodrigo Caya are the musicians behind the name, creating a sun-soaked sound inspired by '70s psychedelia and the Doors. The band’s first-ever practice took place in 2018, though the concept had lived in the members' heads and hearts for years prior, as the trio had orbited each other around Miami’s music scene. During the pandemic, the crew packed up and headed out to the studio for a week-long, no-distractions studio experience, with a little help from sound engineer Ian Mercel. 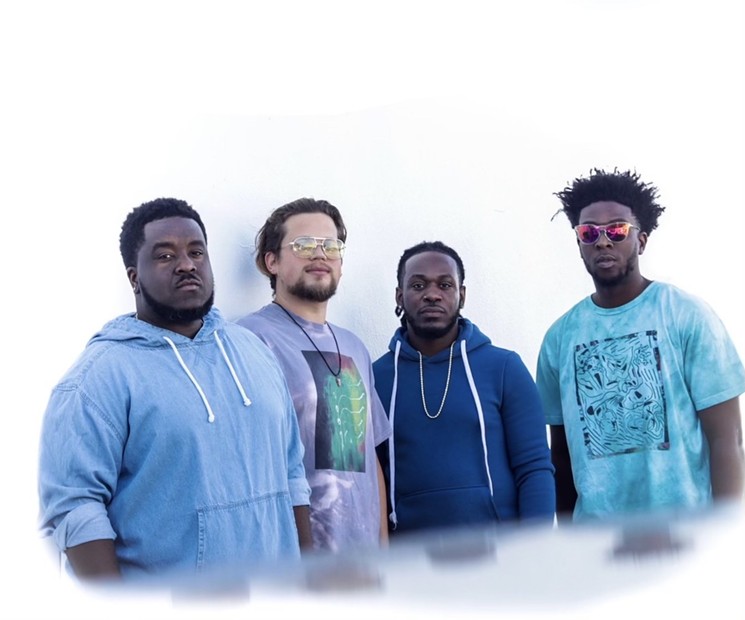 The members of the Smoogies are formally trained musicians with an impressive wake of credits behind them.
Photo by Chris Cadenhead

Funk, Afro-Cuban, and avant-garde jazz influences can all be found on the Smoogies debut album, Planet Smoogies. The band is composed of Vaughn Henry, Dion Kerr, Harvel Nakundi, and David Chiverton, all formally trained musicians with an impressive wake of credits behind them: Lauryn Hill, Nicholas Payton (who can be heard on their debut effort), Ghost-Note, Cris Cab, Sullivan Fortner, Nicole Henry, and Etienne Charles, to name a few. The album is a trip, literally. It's mind-bending, then soulful, then danceable, a true Miami gem which everyone should have on their docket. 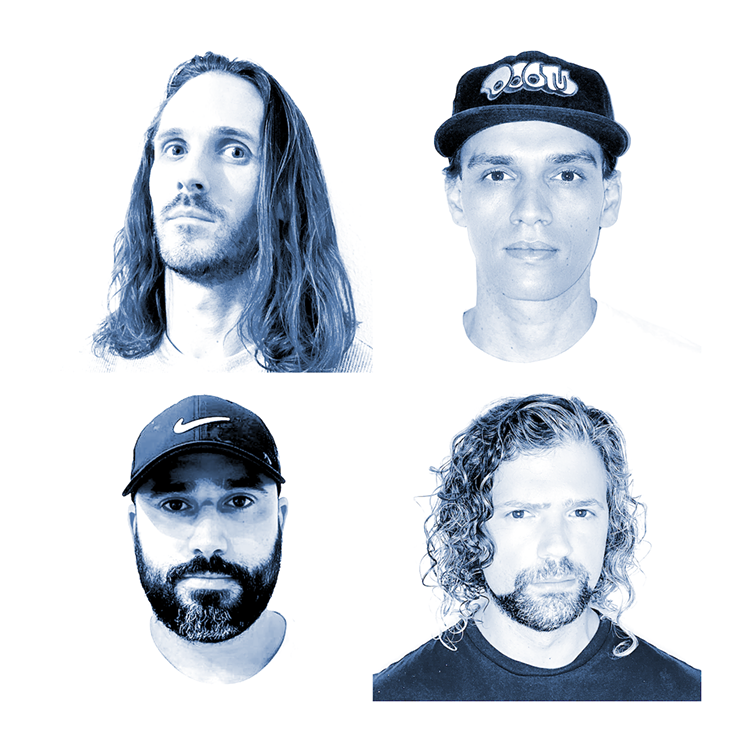 Through Sand's sound is a broody nod to '90s rock.
Photo by: Jared Thomas

Somewhere between alt-rock, emo, and post-hardcore, lives Through Sand, a Miami four-piece made up of Chad Kishick, Peter Allen, Eric Anderson, and Erick Feinberg. Major influences like Failure, Soundgarden, and Hum seeps through the band's four-track cassette release, New Ways. It's a broody nod to '90s rock that was made to be listened to with bangs akimbo. The outfit is putting the finishing touches on its full-length debut, Every Open Hand, to be released later this year.