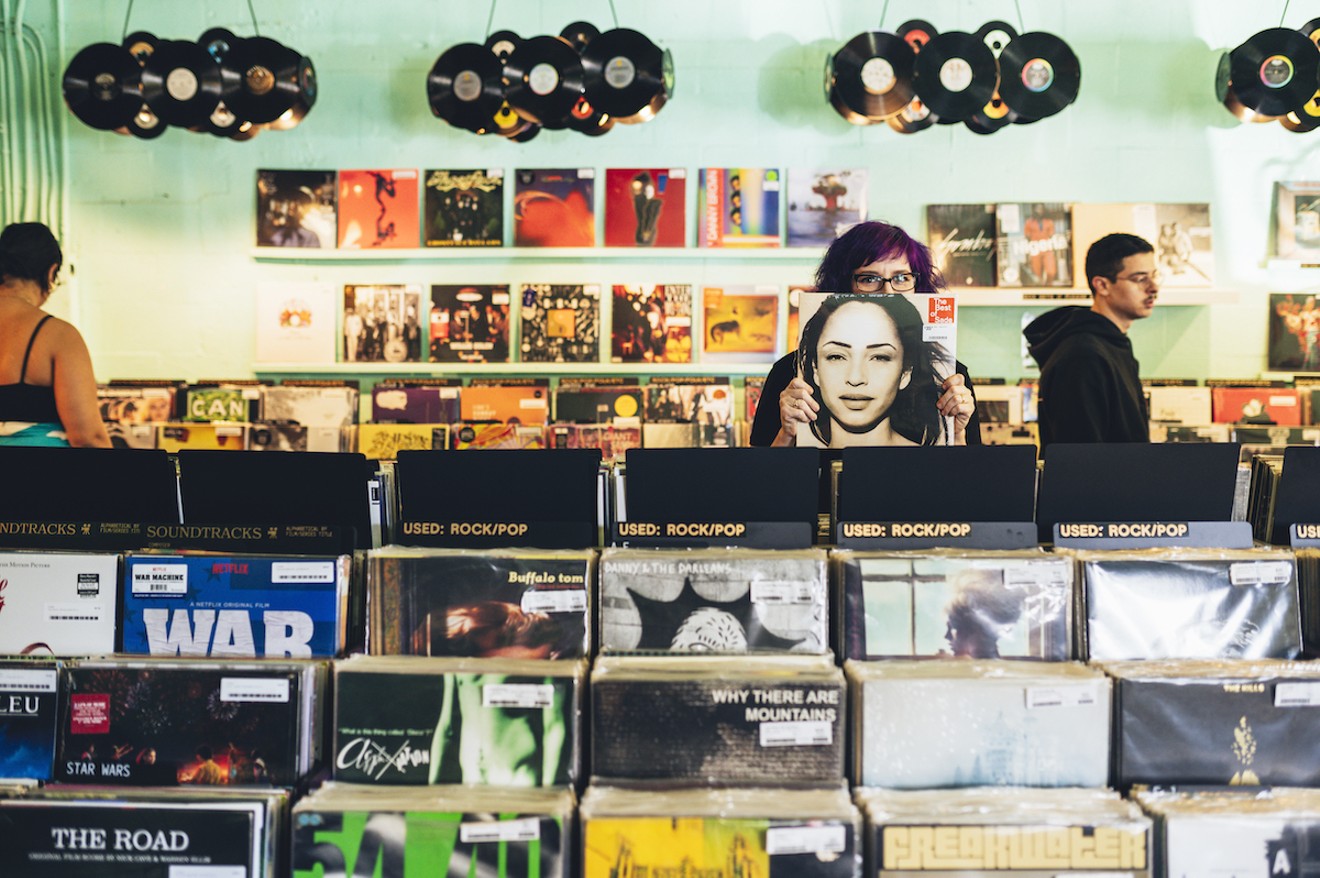 Sixteen years later, Sweat Records founder Lauren "Lolo" Reskin is still catering to Miami's music needs. Photo courtesy of Sweat Records
In 2005, friends Lauren "Lolo" Reskin and Sara Yousuf decided to go for it and open their own record store. Only a few years earlier, peer-to-peer file-sharing service Napster had completely changed, for better or for worse, the way people interacted with music. Physical album sales were down, while sales of digital files and iPods were up.

But for Reskin and Yousuf, the idea of opening a record store at a time when retailers like Sam Goody and Tower Records were calling it quits was never about making money. It was about catering to a Miami customer base the giant retailers were poorly serving.

"By the time I finished high school, a lot of the smaller shops were gone or in their twilight," Reskin says. "So I did see this space for [Sweat] to exist. And anyone who starts a record store doesn't do it for money anyway."

As a teenager, Reskin worked at the Virgin Megastore in Sunset Place, where she took note of what customers were asking for — and the fact that, more often than not, Virgin's stock lacked those records.

"We wouldn't have the items in stock because our [company] buyers were in another state," Reskin says.

So when Sweat opened on NE Second Avenue and 24th Street in Edgewater in March of 2005, its mission was to cater to Miamians' music needs. And despite several setbacks — including a hurricane, several break-ins, and a busted air conditioner — the shop thrived. It moved to its current home in Little Haiti in 2007.

You'd think the pandemic would have dealt a death blow to stores like Sweat, but it seems people have rediscovered the tactile joy of music in the past year. Last September, in its midyear report, the Recording Industry Association of America announced that vinyl sales had surpassed CD sales for the first time since 1986. And in its subsequent year-end revenue report, the RIAA said vinyl sales were up nearly 30 percent, to $619.6 million, in 2020.

"We definitely had a much better year than we anticipated having once the pandemic hit," Reskin says about her store's fortunes. "We heard from a lot of people, 'Well, I've been meaning to get into vinyl. Now seems like a pretty good time.'"

Reskin says she's not entirely surprised. During the 2008 recession, Sweat hardly saw a decline in sales. Also, during the lockdown, the store took it as an opportunity to grow its online sales.

And while you can find a limited selection of vinyl at stores like Target, Urban Outfitter, and Best Buy, Sweat offers something those big-box stores can't: a wider selection and knowledgeable staff.

"One of the things we've been proud of over the last few years is that we do stock every week the widest selection of new releases. That's the mainstream stuff but also indie stuff and digging down further to really obscure things," Reskin explains.

Even giant e-commerce sites like Amazon are no match for Sweat's quality control. How many times have you received a warped or broken disc from the online behemoth? Reskin says the Sweat staff is trained to properly package vinyl for shipping.

"We really carefully pack stuff," she says. We have video tutorials for our staff. We check on stuff as it's being packaged to make sure they are perfect. We tape all the corners — we are really anal-retentive about that."

Now that March is here, in normal times Sweat would be preparing to celebrate its birthday with sale and live music. While the sales remain this year, don't expect any live music as the store continues to practice social distancing and other pandemic protocols. (Capacity is limited to five shoppers at a time, and facemasks are mandatory.)

In addition to 16 percent off everything in-store from Friday, March 12, through Sunday, March 14, Reskin wants everyone to celebrate Sweat's Sweet 16 by sharing their favorite "Sweat Memories" — in the form of photos, videos, and oral histories. The goal is to put together a book and short film with all the material gathered.

Additionally, the store is participating in Vans' Foot the Bill campaign to boost local businesses, with a classic slip-on and T-shirt available for purchase. Only 1,000 pairs of shoes and 250 T-shirts will be sold, with all proceeds going to Sweat. Concert illustrator Brian Butler created the store's custom design.

"It's really cool of them to have asked us," says Reskin, adding that the money raised will go toward a new DJ booth and other improvements when the shop can safely host events again.

With all the challenges the music industry has faced in the past year, it's heartening to see record stores still thriving. In fact, last November, Sweat announced it would begin paying its employees $15 an hour, a move Reskin still believes was the right decision. Given that many of the employees are musicians, a steady income is crucial when the rest of your life is on pause.

And while streaming metrics tell one story, Reskin views record stores as an important tool for labels to understand their audiences.

"To me, we are the boots on the ground of the music industry," she says."We see what people buy. We hear what they are asking for."

Sweat Records. 5505 NE Second Ave., Miami; 786-693-9309; sweatrecordsmiami.com.
KEEP MIAMI NEW TIMES FREE... Since we started Miami New Times, it has been defined as the free, independent voice of Miami, and we'd like to keep it that way. With local media under siege, it's more important than ever for us to rally support behind funding our local journalism. You can help by participating in our "I Support" program, allowing us to keep offering readers access to our incisive coverage of local news, food and culture with no paywalls.
Make a one-time donation today for as little as $1.