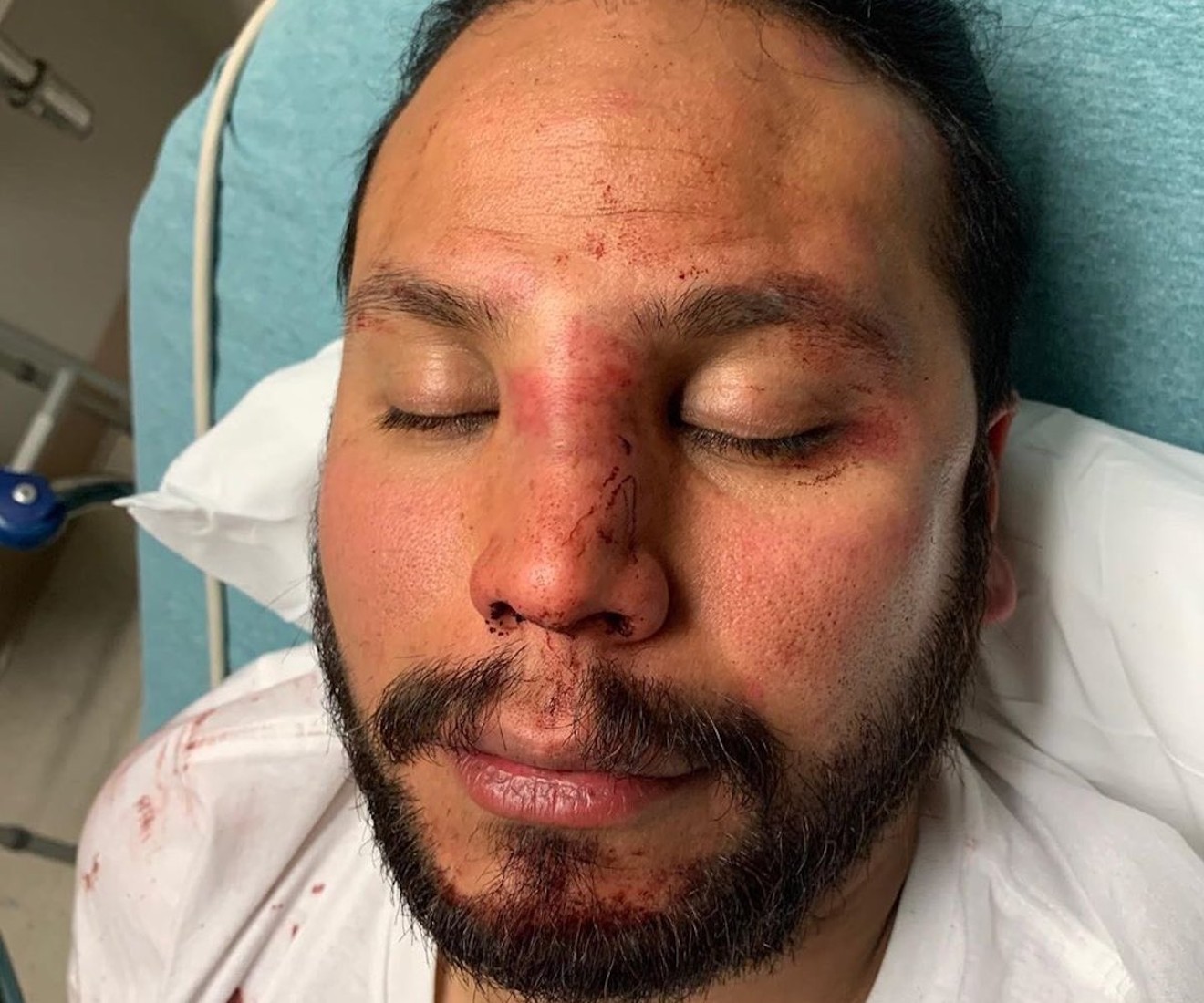 Orlando Morales Photo courtesy of the Mavericks
A trumpet player for Miami-spawned, Grammy-winning band the Mavericks says he's "still in shock" over the Tennessee bar beating that left him bruised and put his friend in the hospital with shattered facial bones.

Lorenzo Molina Ruiz says he and his buddy Orlando Morales were jumped by two men while waiting in a bathroom line at Tony's Eat and Drink in Franklin last Sunday. Photos posted by the band show the aftermath: Morales' broken nose and swollen face alongside a blood-soaked facemask.

Molina has called the incident a hate crime. He set up a crowdfunding page for Morales, which has raised more than $27,000 to date.

"We didn’t do anything to anybody and got beaten up badly," Molina wrote on the fundraising website.

Molina was at the bar near Nashville with a group of friends when the beating occurred. Molina's attorney, David Rich, tells New Times that prior to the incident, the group was "harassed, both outside and inside of Tony’s bar for conversing in Spanish."

"It is likely Orlando will require reconstructive [or] restorative surgery for disfigurement he suffered as a result of the assault,” Rich says.

The Franklin Police Department initially described the incident as a "brutal aggravated assault" and released photos of the suspects, asking the public for help tracking them down. The suspects came forward Tuesday and were interviewed by detectives. Franklin police then stated that there was "conflicting information" about what transpired.

"The accounts by involved parties are not in agreement with one another," a communications officer for the Franklin Police Department said. "Our hope is that independent witnesses who come forward or who may have cell phone video of the incident may be able to provide additional context."

As of Wednesday night, the two suspects had not been charged.

The police department declined to release the incident report, citing the open investigation.

In an interview with the Tennessean, the band's frontman Raul Malo said he brought Molina to the U.S. to join the Mavericks, so he couldn't help but feel somehow responsible for the trumpet player's misfortune. Molina joined the band in 2017 after honing his skills in Cuba.

"[Molina] has got so much overwhelming support and love that I think he knows that this isn't how we do things here. These are certainly testy times and emotions run high at the moment, but Americans overall are decent people," Malo told the Tennessean.

Betty Malo, Raul's wife, has criticized the bar staff's response to the incident, decrying their purported decision not to summon police immediately. By all accounts, the police were not called until Morales was in a Tennessee hospital.

Tony's Eat and Drink released a statement expressing condolences for the injured and saying it is cooperating with the investigation.

"We are an establishment that is open to the public and cannot know what may or may not be in a person’s heart and mind, but we do not condone bad actions," the statement reads.

The band won a Grammy in 1996 for its song "Here Comes the Rain" and has since racked up several Grammy nominations. They cut their teeth in the Miami music scene in the 1980s, performing at Churchill's Pub and other local venues before breaking out to marquee success with a genre-bending sound that spanned country and Tejano-infused rock.

Raul once told the Village Voice that the band was "too country for Miami and too Cuban for Nashville."
KEEP MIAMI NEW TIMES FREE... Since we started Miami New Times, it has been defined as the free, independent voice of Miami, and we'd like to keep it that way. With local media under siege, it's more important than ever for us to rally support behind funding our local journalism. You can help by participating in our "I Support" program, allowing us to keep offering readers access to our incisive coverage of local news, food and culture with no paywalls.
Make a one-time donation today for as little as $1.
Izzy Kapnick is a freelance writer for Miami New Times, covering environmental law, white-collar crime, and the healthcare industry. He has worked as a legal news reporter in South Florida since 2008.
Contact: Izzy Kapnick