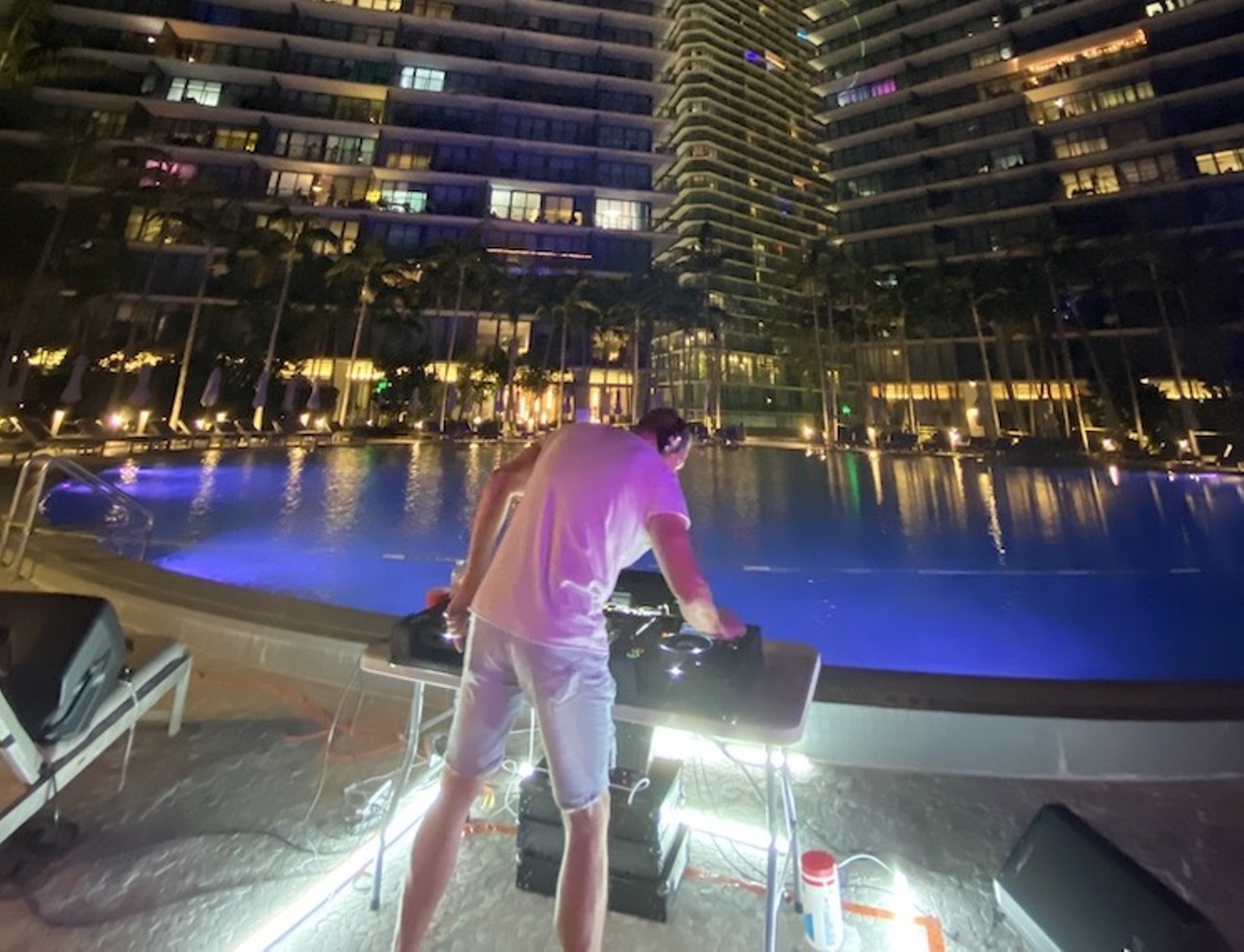 Event producer Denial Events is putting on a Balcony Raves event series at the Paraiso Bay and Gran Paraiso buildings in Edgewater. Photo courtesy of Denial Events
Humanity craves entertainment. It's right at the top of Maslow's hierarchy of needs. Once we have food, shelter, and safety, we desire human interaction and artistic expression. In this period of social distancing, when live music venues, movie theaters, museums, and other venues are closed, South Floridians have found an ingenious workaround: balcony parties.

You might have seen the viral videos: high-rises around Brickell, Downtown Doral, and Edgewater where hundreds of neighbors are grooving on their terraces to the same song. They helped remind the world that we might all be under quarantine, but that doesn't mean we lost our right to party.

Rafi Leibo, a partner at the event management company Denial Events, organized Balcony Raves at the Paraiso Bay and Gran Paraiso towers in Edgewater, where three 60-story towers overlook a central circular pool. (Before the shutdown, Denial had a slew of Miami Music Week events scheduled at the Shore Club, Mokai, and Rockwell.)

"I'm a social guy," Leibo says. "This is a fun building, but it has been depressing. The pool is closed, the gym is closed, you go up the elevator and you don't see anyone. I wanted to do something to bring residents together when we're the most isolated."

Once he obtained permission from the building's management, Paraiso Bay Master and Atlantic Pacific Management, to provide entertainment that encouraged people to stay inside, Leibo and his partner Jared Shaw ran with it. The first edition, held March 28, saw Tony Merenda spinning reggaeton, pop, and electronic music from 5 to 8 p.m. To drive home the point of social distancing, the DJ stood alone on the pool deck. From Leibo's vantage point on his 49th-floor balcony, the event was a success.


"I wanted to do something to bring residents together when we're the most isolated."

"There were dance parties. Every balcony had two or three people dancing," he says. "Some were wearing crazy outfits, wild robes. One family was playing an oversized game of Jenga."

As anyone who has ever lived in an apartment building could tell you, there's always one dweller who wants to spoil everyone's fun.

"There were two residents who complained," Leibo concedes. "But that's out of a thousand units. They weren't complaining about the noise — it wasn't that loud — they were just sour about the whole thing."

Still, Denial had local authorities on its side. Before the inaugural edition, Miami Commissioner Ken Russell took the microphone and thanked residents for being responsible citizens and staying in their homes during this perilous time.

The balcony raves aren't limited to local acts. This past Saturday, Denial surprised residents with a set by the German DJ/producer group Cosmic Gate, which Leibo had kept under wraps to discourage interlopers. "We don't want to encourage nonresidents to come because that defeats the whole purpose of social distancing," he notes.

Denial is very much aware that Paraiso Bay and Gran Paraiso residents are a diverse group. And Leibo says he's trying not to get too far ahead of himself in planning upcoming events (which might eventually include livestreaming). That includes keeping his audience members — and their health — in mind.
"We've got some credible ideas, but it depends on what's socially responsible," he says. "We'll try to have fun but with respect to everyone's health. We have diverse buildings, older people, families, so we want to please the masses."

Adds Leibo: "Hopefully, we can have live music from local residents."

Cosmic Gate hit the decks at Paraiso Bay and Gran Paraiso in Miami's Edgewater neighborhood this past April 4.
Photo courtesy of Denial Events
The music is playing further west too, in Downtown Doral.

"The first week, we literally coordinated the performance in less than 48 hours, and it was by word of mouth," event organizer Ana-Marie Codina Barlick says.

That event came together when Codina Barlick learned of Patrick Araujo, a member of a brass band whose gigs had been canceled. "We contacted him, and he and a bandmate came the next day to perform. As soon as they began playing, the residents from our condominium towers rushed to their balconies to enjoy the uplifting tunes, including 'When the Saints Go Marching In' and 'La Vida Es un Carnaval.'"

The following weekend brought the Brazilian band Forro Cravo e Canela, which won praise not only for its cover of Bob Marley's "Three Little Birds" but also for making quarantine much more festive.

"We had a father with a baby in the [Canarias development of Downtown Doral] walk outside his house to see what was going on," Codina Barlick recounts. "When he heard the harmonious Brazilian music, he was so grateful to have them there that he even requested a song. There has been an overwhelmingly positive response, which is why we are continuing to do it."

Codina Barlick says they have a special surprise planned for Easter Sunday but is hesitant to share details.

"We can't ruin the surprise, but our residents are in for a treat," she says. "We are following all social-distancing guidelines, so right now, only residents can enjoy the live music, but we will be livestreaming. Unfortunately, with the strict guidelines we are abiding by, if nonresidents drive to Downtown Doral to try to enjoy the live music, they may be asked to leave."
KEEP MIAMI NEW TIMES FREE... Since we started Miami New Times, it has been defined as the free, independent voice of Miami, and we'd like to keep it that way. With local media under siege, it's more important than ever for us to rally support behind funding our local journalism. You can help by participating in our "I Support" program, allowing us to keep offering readers access to our incisive coverage of local news, food and culture with no paywalls.
Make a one-time donation today for as little as $1.