Will the Real Churchill's Pub Please Stand Up? 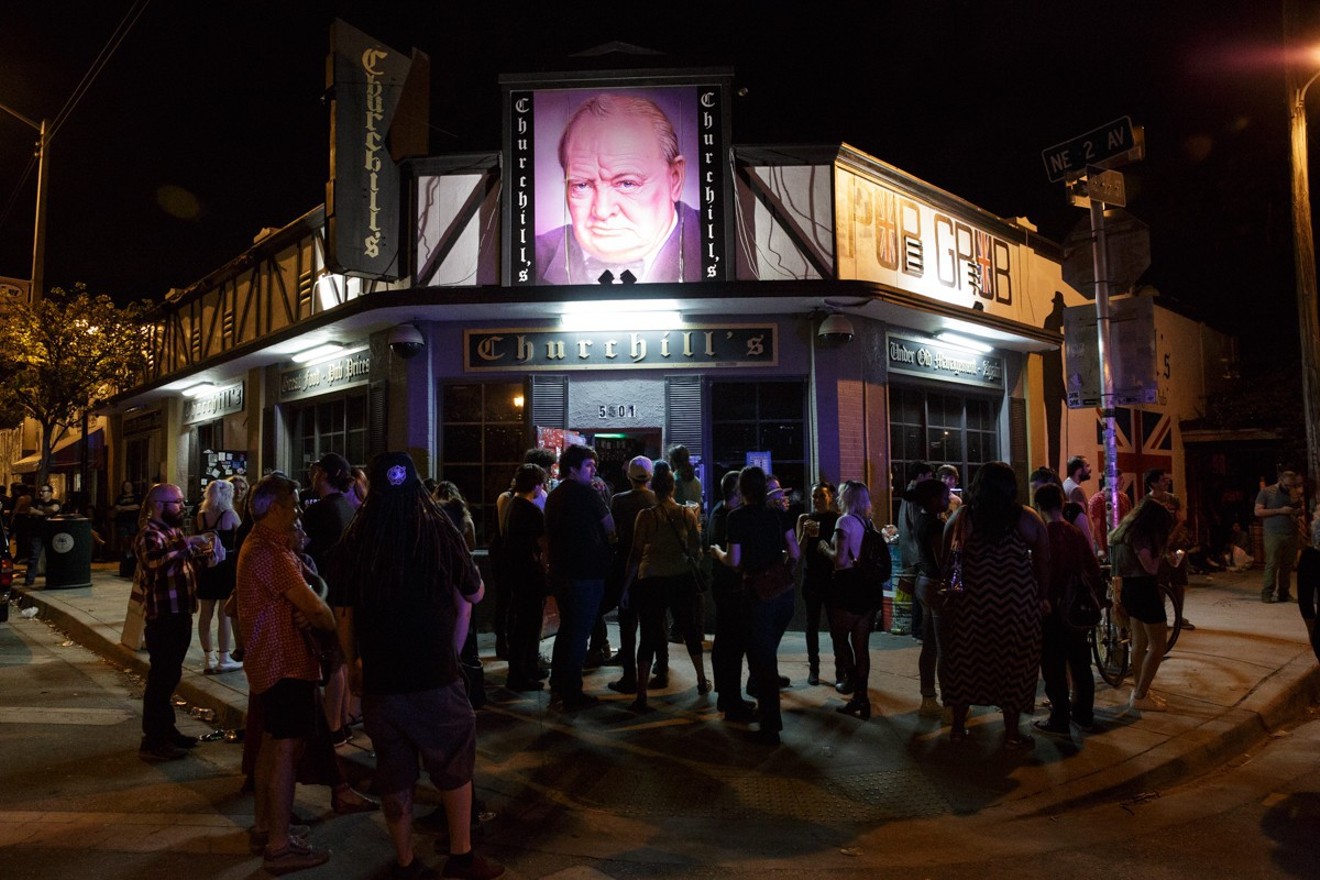 What's going on with Churchill's Pub? Photo by Alexander Oliva
Over the weekend, Churchill's Pub, the legendary Little Haiti bar and music venue, became embroiled in a bitter social-media war — seemingly, with itself.

In a post published on the pub's official Facebook page last Friday, a cryptic message signed by Franklin Dale, the club's current operations tenant, claimed that he's being "unlawfully evicted from the venue." Dale condemned the action taken by his landlord, promised to share a "story that will enlighten [the] community," and vowed to "seek justice" and "fight for Miami music."

The post came after someone had snapped a picture of a three-day notice stuck on Churchill's front door demanding $92,838.03 in overdue rent by August 24.

Regulars were quick to react to Dale's announcement, with some questioning if they'd ever find a better restroom (Churchill's bathrooms are notoriously grotesque) and others demanding that he "give this page back to the real Churchill's."

Most stated their confusion.

Meanwhile, on Churchill's Instagram account, a post confirmed that Dale and his company, District Live Agency LLC, were in the process of being evicted but added that "[they] are not Churchill's, and as soon as the Court Sheriff removes them and it's safe, Churchill's will be back."

The post, which was unsigned, claimed that Dale had hacked the Churchill's Facebook page and that he was "making false statements." The author of the Instagram post was Ian Michael, a longtime employee going back to the late '90s, who had previously run Churchill's social-media channels.

This only added to the confusion, with many regulars now questioning who owns the landmark venue, and who truly speaks on its behalf.

Rumors also swirled that Churchill's previous owner, Dave Daniels, was involved somehow. But Daniels tells New Times that after he sold the property to developer and entrepreneur Mallory Kauderer in 2014, he stopped being involved with the venue's operation.

"I have no operational say-so," Daniels says.

While a post on Facebook asserts that Dale bought Churchill's Pub from Kauderer, court documents obtained by New Times tell a different story. (As of press time, Dale still has control of Churchill's Facebook page.)

The current dispute between Dale and Kauderer essentially boils down to an argument over the Churchill's Pub brand.

After Daniels sold Churchill's to Kauderer in 2014, Dale initially came on as a business consultant. Court documents show that on April 1, 2019, Dale's company, District Live Agency, signed a three-year lease to operate Churchill's Pub. The lease says District Live would pay a monthly rent of $10,200 to 5501 NE Second Avenue LLC, Kauderer's company. The agreement was signed by both Dale and Donita Leavitt, Kauderer's business partner.

Dale, who spoke to New Times inside Churchill's Pub, claims he had a gentleman's agreement with Kauderer and that a series of texts make Dale the de facto owner.

In the text messages Dale shared with New Times, Dale asked Kauderer to confirm his role in the lease.

"I have to own the business in order to have my new partners come in. I'm agreeing on a lease that will make this transition smoothing. Am I wrong?" Dale wrote.

"The new lease means you own the business, [Dale]," Kauderer responded.

However, when reached by New Times, Kauderer refutes the claim that anyone but himself has ownership of the venue, saying, "I own the property, the concept, and trademark, and brand."

Records from the U.S. Patent and Trademark Office show that Regents Park Equity LLC, one of Kauderer's companies, filed for the Churchill's Pub trademark in December 2018.

The lease agreement shows that the property and the liquor license remained under the ownership of 5501 NE Second Avenue LLC and were leased to Dale, stating that "at no point during the entirety of the Lease Term may the Tenant be permitted to obtain a separate liquor license for use on the premises."

"Dale is a tenant operator that's being evicted — that's it," Kauderer asserts. "He hasn't met his obligations."

This was the first time Kauderer had leased the operations of the venue, and according to him, it will be the last.

"It won't happen again," he promises.

The motion to evict District Live was filed on August 28. Zalman Law Firm, the legal representatives of 5501 NE Second Avenue LLC, has since filed a motion to correctly identify Dale's company as District Live Agency LLC.

Besides the confusion of lease agreements versus legal ownership, it seems the impetus for the drama started as the pandemic hit, when the bar, along with thousands of others, was forced to close.

Dale, who leases a total of four properties from Kauderer, decided that the unforeseen pause in regular business would allow him to break ground on some major renovations to both Churchill's and the three neighboring properties. According to Dale, this was part of a bigger plan agreed upon with Kauderer to create the Little Haiti Entertainment District, a broad vision that would be executed by Dale, and which would have seen Little Haiti become a walkable live music hub.

According to Kauderer, he had shown Dale the plans for the proposed entertainment district but there was no concrete agreement that Dale would be in charge of executing it.

Dale also alleges that Kauderer owes him money from independent consultancy work that dated back to when he was initially brought on board by Kauderer, and that there was, again, a gentleman's agreement to exchange what was owed for professional services in lieu of rent.

"I don't have to pay rent," Dale says. "I want to go through legal. I'm challenging him to come to evict me. I asked him for an accounting reconciliation."

Kauderer says he doesn't owe Dale for his consultant work and there is no balance pending.

During the lockdown, Dale and his partners began construction on an Airbnb rental for touring bands within a previously dilapidated apartment building, a new bar with an adjoining parking lot, and a new venue — all of which Dale claims he and his partners have funded. A visit to the properties confirmed there has been a significant amount of work. What Dale and his partners did not do was pay the rent, and Kauderer has since sent three-day notices for the other three properties. When asked by New Times when was the last time he paid rent for the Churchill's property, Dale refused to answer.

With the eviction proceedings still pending, Dale says he looks forward to presenting his case.

Kauderer, on the other hand, is ready to put this behind him and promises to usher in a new era for the iconic bar and venue.

"I will bring in a team that was historically important to Churchill's, and carry on," he says.
KEEP MIAMI NEW TIMES FREE... Since we started Miami New Times, it has been defined as the free, independent voice of Miami, and we'd like to keep it that way. With local media under siege, it's more important than ever for us to rally support behind funding our local journalism. You can help by participating in our "I Support" program, allowing us to keep offering readers access to our incisive coverage of local news, food and culture with no paywalls.
Make a one-time donation today for as little as $1.