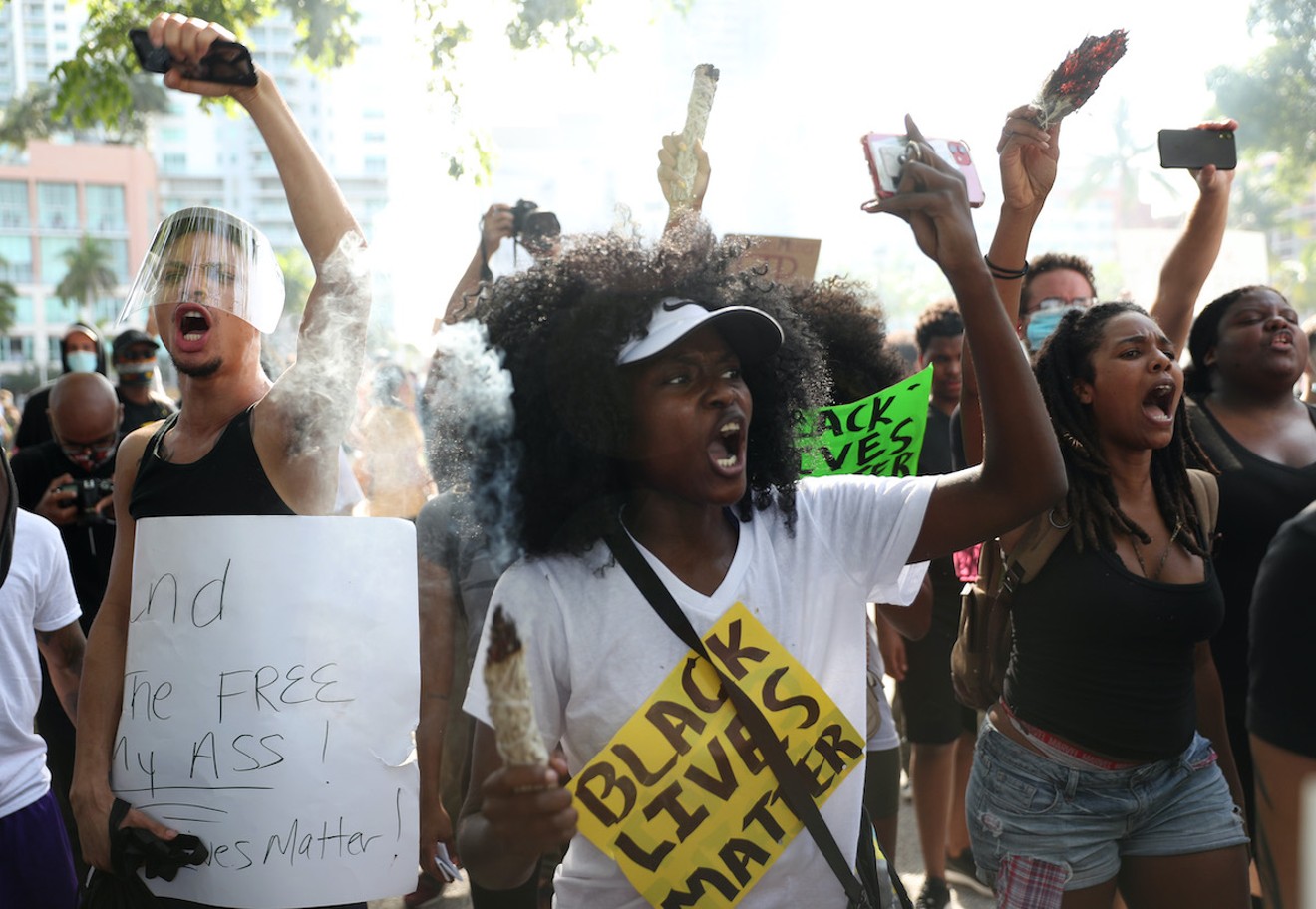 Protesters marched in downtown Miami in response to the death of George Floyd at the hands of Minneapolis Police. Photo by Joe Raedle/Getty Images
Miami residents gathered en masse this past weekend for the first time since coronavirus concerns effectively shut down the city more than two months ago. Two major gatherings took place on Biscayne Boulevard near the American Airlines Arena, the setting of countless basketball games and concerts of the pre-COVID-19 era. But the weekend's events were anything but a celebratory return to normalcy.

Instead, Miami's first major post-COVID gatherings were part of the hundreds of demonstrations that have taken place across the country in reaction to the death of George Floyd, an unarmed black man who was allegedly murdered by a Minneapolis Police officer who kneeled on his neck for nearly nine minutes as Floyd begged for his life. The protests took place against the backdrop of an international pandemic that has killed more than 100,000 Americans, the worst financial crisis since the Great Depression, and the alleged murders of Ahmaud Arbery in Georgia, Breonna Taylor in Louisville, and Tony McDade in Tallahassee.

While past Black Lives Matter demonstrations have been met with the conspicuous silence and absence of left-leaning nonblack groups, Floyd's alleged murder — and subsequent inaction by authorities in its aftermath — has incensed an already reeling nation which finds no other recourse except to take to the streets amid a global pandemic, albeit with facemasks in tow.

With protests marred by blazes and unscrupulous episodes of police brutality, pressure has mounted on individuals with influential platforms to support anti-racist protestors. Prominent Miami-based musicians from Jennifer Lopez to Pitbull, DJ Khaled, Gloria Estefan have lent their voices to the cause on social media. Still, others have gone a step further, showing solidarity by marching with protestors this weekend.


PROUD TO BE YOUR FAN pic.twitter.com/JyBernFuuE

Former Fifth Harmony member Lauren Jauregui appeared to burn sage as she led "Say Her Name" chants down Biscayne Boulevard Saturday evening in remembrance of Breonna Taylor, a 26-year-old EMT who was fatally shot by plainclothes Louisville Metro Police Department officers serving a "no-knock warrant" back in March. Jauregui alluded to the Miami Police Department's firing of tear gas and rubber bullets on Twitter, though she says she left shortly before the scene devolved into chaos.


Wouldn’t be a Miami event without a few celebrities. Here’s Camila Cabello and Shawn Mendes in the crowd pic.twitter.com/CuxGgYmtGU

Jauregui's former Fifth Harmony bandmate Camila Cabello and her boyfriend, singer Shawn Mendes, joined protestors Sunday afternoon just steps away from the AAA, where Cabello was scheduled to play a now-canceled concert in September. Her protest appearance drew mild criticism on social media as it came less than six months after she publicly apologized for racist Tumblr posts she shared online when she was a teenager.

Rapper Tory Lanez also attended the protest on Biscayne Boulevard Sunday evening, just hours after posting a series of tweets criticizing "my rich celeb friends" and "my black peers in this entertainment industry" for condemning looting. Lanez even jumped on Instagram Live to discuss the topic with Love & Hip Hop personality Shekinah Jo Anderson, who went viral over the weekend for crying over the destruction of a Gucci store in Atlanta. City of Miami Police could be heard giving dispersal orders on Lanez's Instagram story around 7 p.m. Sunday.

As nationwide protests head into their second week and public pressure mounts for influential figures to come out in support of Black Lives Matter and anti-racist activists, it remains to be seen whether more local influential musicians will go beyond platitudes as tensions escalate. With precautionary facemasks providing an extra layer of anonymity, visible Miami musicians may feel more compelled to follow suit.
KEEP MIAMI NEW TIMES FREE... Since we started Miami New Times, it has been defined as the free, independent voice of Miami, and we'd like to keep it that way. With local media under siege, it's more important than ever for us to rally support behind funding our local journalism. You can help by participating in our "I Support" program, allowing us to keep offering readers access to our incisive coverage of local news, food and culture with no paywalls.
Make a one-time donation today for as little as $1.