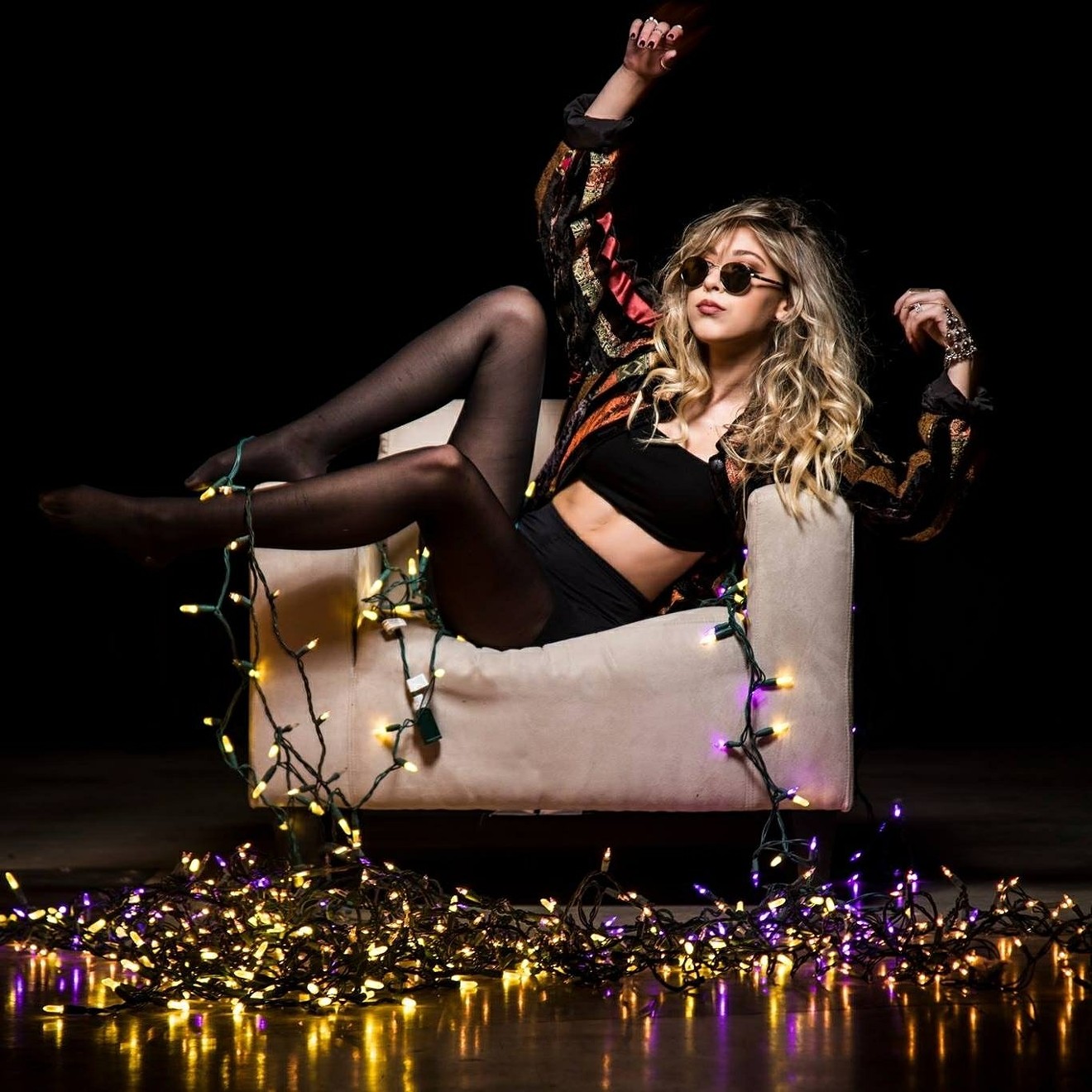 Brika Photo by Nicolas Achuey
With the federal government shut down and Donald Trump tweeting angrily at anyone who dares defy him, it's safe to say 2018 was a shit year. We hope 2019 will be better, but let's be honest: It will probably be worse.

But one thing that certainly wasn't shit this year was Miami music. Perhaps emboldened by the rise of Spanish-language music on Top 40 radio, South Florida acts seemed more willing to crisscross languages. Rock music also continues to flourish in the city, even if its commercial heyday seems pretty much done thanks to the ascent of hip-hop and EDM. Then there are the City Girls, who perhaps have singlehandedly resurrected the Slip-N-Slide style of hip-hop that made so many '90s Miami house parties fun. JT and Yung Miami are certainly a breath of fresh air in a SoundCloud-rap-laden musical landscape.

If you slept on Miami music this year, here's the perfect 305 playlist to help you close out an otherwise horrible 2018. 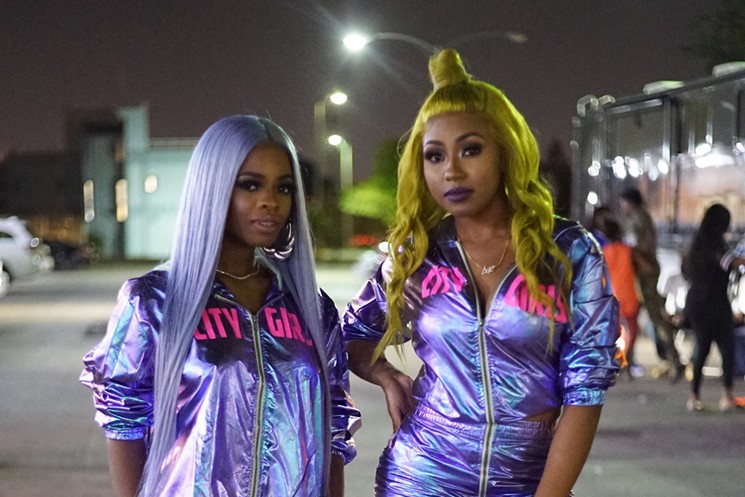 City Girls' JT and Yung Miami
Photo by Angel "TrackStar1323" Cabrera
1. City Girls, "Period (We Live)." Choosing the best song from City Girls’ debut album, Period, was almost an impossible feat because the 16-track LP is full of bangers. And if this were a list of Miami’s best albums, Period would undoubtedly sit at the top. “Period (We Live)” is a high-energy hip-hop song that pays homage to the City Girls' hometown; it's a "Take It to da House" for a new generation. Miami’s newest queens of the South, JT and Yung Miami make “alter-ego music” while repping the 305. File under "Miami royalty."  — Jessica Gibbs Dracula
Courtesy of Dracula
2. Dracula, “Como La Flor.” Like Selena’s heart-swelling original, Dracula’s “Como La Flor” overwhelms in its ability to conjure ghosts. Covering a song so beloved by Latinos across the nation is no small challenge, but as on their staple covers of songs such as “Veinte Años,” Dorys Bello and Eli Oviedo effortlessly transmute the source material via their stripped-down arrangements and exquisite harmonies. In this quiet, the lyrics resonate timelessly, and their ay's are some of the best in recorded Spanish-language music. Recorded at DJ Le Spam’s City of Progress Studios with the Sweat Records Records powerhouse, Dracula’s “Como La Flor” is the crown jewel of what DIY in Miami can do. — Stefanie Fernández Christian Carcamo
Courtesy of Christian Carcamo
3. Christian Carcamo, “House of Lies.” On his personal website, indie singer-songwriter Christian Carcamo actively searches for collaborators. He promises to guide aspiring musicians in how to craft “radio-ready” songs. Judging by his body of work, particularly the glittering “House of Lies,” we think the man knows what he’s doing, and though only in his early 20s, he would make a suitable mentor for other young artists. Already an accomplished guitarist and producer, Carcamo has yielded the EP Yorktown and the one-off singles “Promise” and “War Machines.” But the Yorktown cut “House of Lies” is a clear standout thanks to its ambitious yet accessible sound. Combining the grandiosity of A Head Full of Dreams-era Coldplay with touches of M83’s synths and sax solos, “House of Lies” is the truth in terms of Carcamo being the next big Miami music export. — Angel Melendez 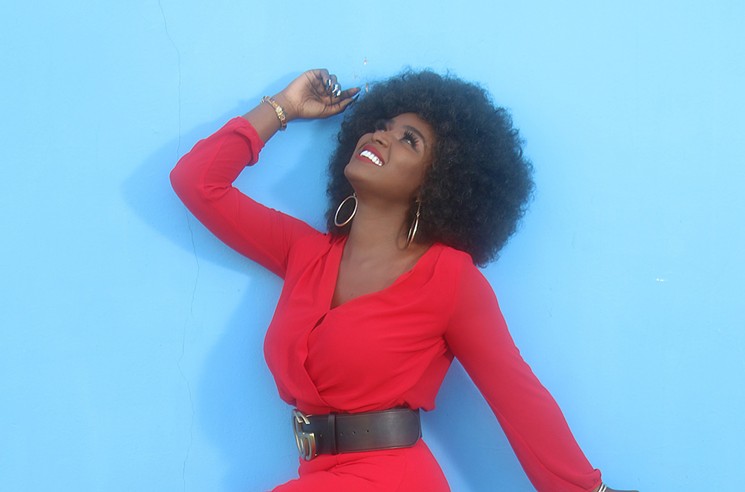 Amara La Negra
Photo by Michael Campina
4. Amara La Negra, “What a Bam Bam." Amara La Negra has been coming for Miami for a minute. The Hialeah native is no newcomer to music (see 2013’s “Poron Pom Pom”), but this year, she forced the music industry to show its true face when it comes to colorism within and without the Latinx community. Of the tons of bangers she released in 2018, “What a Bam Bam” is the firebrand of the bunch. It's a reworking of dancehall legend Sister Nancy’s oft-sampled “Bam Bam” that foregrounds the influence of dancehall and Afro-Caribbean music on American pop culture, in addition to Amara’s own dazzling self-vindication, against a Miami backdrop. “I'm always balling, I be doing my thing/No tengo por que hacer show,” she sings with a wink, except she's putting on a tremendo show, one the world can’t help but hear. — Stefanie Fernández 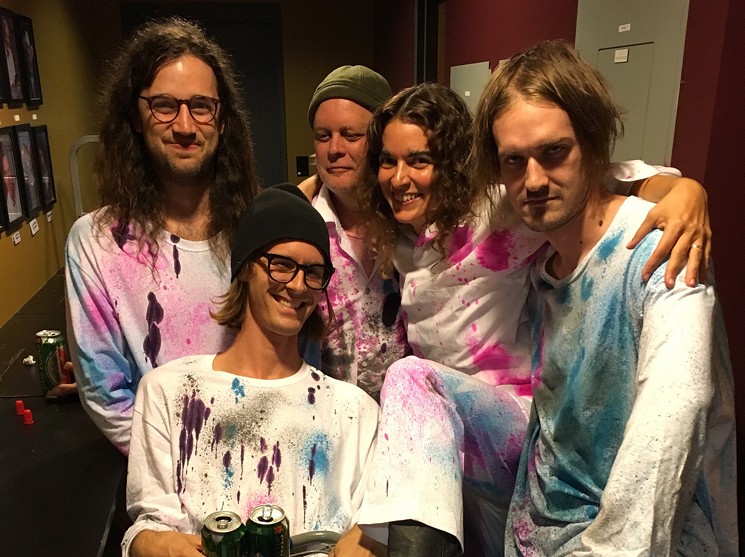 Donzii
Photo by Dani Miller
5. Donzii, "Mines." Postpunk, like most musical genres, is difficult to define beyond knowing when you hear it. One listen to "Mines" and you know you're hearing postpunk. Angular guitars and arty lyrics fueled by a driving beat fit the song right in with a playlist of Public Image Ltd, Wire, and all the other 40-year-old bands that inspired the term "postpunk." But Donzii is very much of the now. Fronted by singer Jenna Balfe and backed by Danny Heinze, Dennis Fuller, and Monroe Getz, the band had a busy 2018 that saw it play countless local shows. The only question about this Miami band is if it might evolve to post-postpunk in 2019. — David Rolland 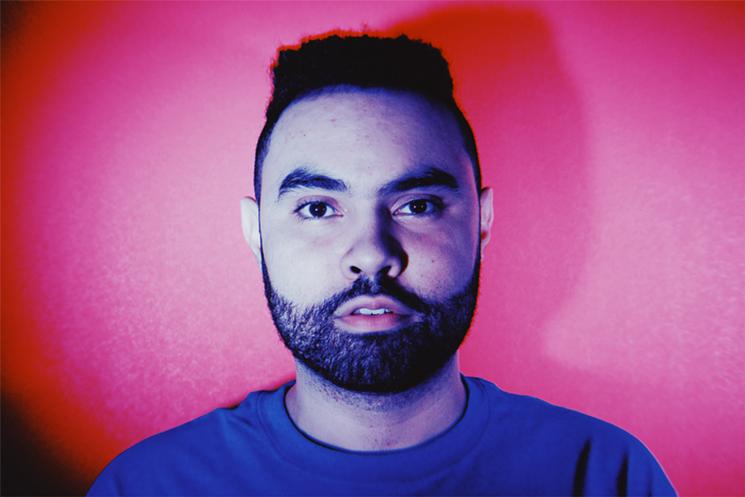 Millionyoung
Photo by Jessica Gibbs
6. Millionyoung, "Never Be the Same." “Never Be the Same,” the second single off Millionyoung’s fourth full-length LP, Rare Form, finds the Miami native in just what the album title says. The brainchild of DJ, producer, and vocalist Mike Diaz, Millionyoung is a mainstay of the South Florida electronica scene, and as he’s continually done, Diaz is adding to the conversation once again. Rare Form, and “Never Be the Same” specifically, have long since moved on from Diaz’s early chillwave days. In fact, the title of the track feels like a promise from Diaz both as a man in love and as a musician in love with evolving. There’s a sparkling, funky groove here, peppered with touches of disco and buoyed by dreamy, entrancing vocals. “Never Be the Same” perfectly encompasses where Millionyoung has been and where he’s headed next. For the moment, though, let’s enjoy the party he’s throwing right now. — Angel Melendez Love, Abbey
Courtesy of Love, Abbey
7. Love, Abbey, "Winter Air." On "Winter Air,"  21-year-old singer-songwriter and multi-instrumentalist Abbey Loren — better known as Love, Abbey — knows how to make an entrance. Beginning with dramatic and imposing piano chords and crisp finger snaps to catch listeners' attention, the icy “Winter Air” warms up with her girlish vocals pleading, “Don’t you leave me.” It’s a striking combination of sound and emotion. This mixing of styles is something the young musician began honing as a classically trained pianist in her early days, as a professional songwriter currently, and as a onetime voice actor for children’s dolls. “Winter Air,” one of two singles released by Love, Abbey in 2018 — the other being the very different and saccharine synth-pop ditty “Slow Love” — is a musical parade well suited for marching toward or, preferably, away from a frosty relationship. — Angel Melendez

XXXTentacion
Photo by Jack McKain
8. XXXTentacion, "Whoa (Mind in Awe)." This publication will forever be intertwined with the tragically short career of Broward County rapper XXXTentacion. In June, a New Times cover story featured the last interview of the troubled artist who had been accused of domestic violence. Two weeks after the article was published, he was killed in a Deerfield Beach robbery attempt. Though XXXTentacion's alleged actions made it difficult to separate the art from the man, his talents were hard to dispute. "Whoa (Mind in Awe)," off his first of what will undoubtedly be many posthumous releases, made his musical future seem limitless. It's an atypical track from the SoundCloud rap genre, haunting and beautiful, an eerie reminder of what was lost. — David Rolland 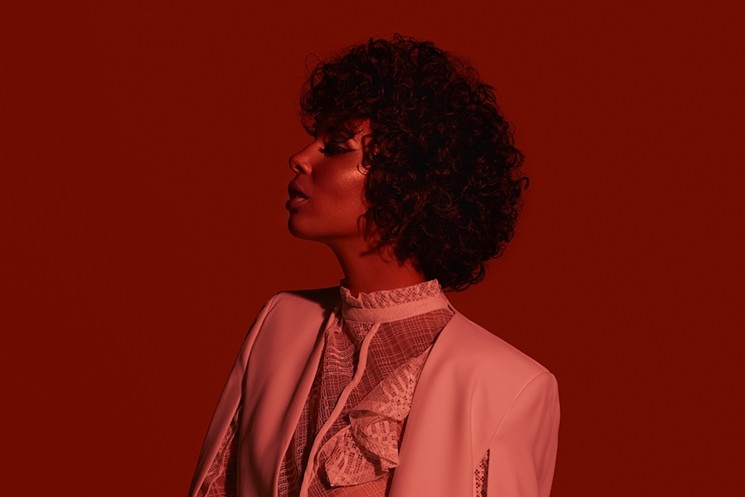 Raquel Sofia
Courtesy of Raquel Sofia
8. Raquel Sofia, "Déjalo Ir." Originally from Mayagüez, Puerto Rico, singer-songwriter Raquel Sofia is a graduate of the University of Miami's Frost School of Music and was nominated for Best New Artist at the 16th-annual Latin Grammys. Still, for all of her accomplishments and successes, Sofia is still something of a hidden gem, having spent the early part of her career in the background. The trilingual vocalist — singing in English, Spanish, and Portuguese — has done backing vocals for Juanes and Shakira, but the release of 2018’s 2:00 AM should change that. The ten-track collection of heartfelt Spanish pop-rock tunes includes many great moments; one of the best comes about halfway through the album, in "Déjalo Ir." Somber strings accompany Sofia’s nearly sorrow-stricken voice as she mourns the demise of a dream come true. She likens it to a party that ends too soon and passionately laments that sometimes we just need to let go. “Déjalo Ir” is cathartic in both its beauty and its finality. — Angel Melendez 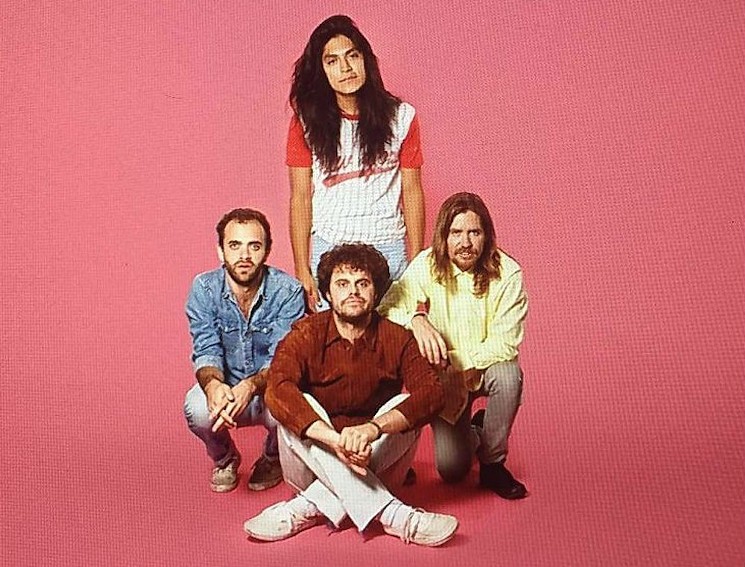 Jaialai
Photo by Gregorio Acuña
10. Jaialai, "Broken Satellite." Although it formed in 2016 and released its debut EP in 2017, Miami psych-rock band Jaialai has a name from the '80s and a sound straight out of the '70s. The four-piece — consisting of Jose Adames on guitars and synths, Richard Boullon on drums, Mario Lemus on bass, and Oscar Sardiñas on guitars and lead vocals — dropped its shoegaze-esque first effort, When I’m on the Run, only last year. But the quartet returned in 2018 with a pair of solid singles, including the standout “Broken Satellite.” Influenced by the likes of Radiohead, Jaialai on “Broken Satellite” channels a multitude of Britpop spirits, including the tender, twinkling melodies of Travis. Meanwhile, as Sardiñas softly croons, “Cool the mind,” the band melds the worlds of surging guitar pop and a crescendoing, fuzzy wall of sound for which Oasis is known. “Broken Satellite” is a hypnotic, effortless track that rock fans from any era can and will appreciate. — Angel Melendez