Tedeschi Trucks Band. South Florida isn’t exactly known as a hotbed of blues activity, but every so often a show comes along that briefly bucks that trend. For years, Tedeschi Trucks Band has been one of the few groups to consistently visit South Florida with a classic, soulful blues-rock sound and bring together fans of the genre. Those fans will finally get their first major fix of the summer when the group returns with its Wheels of Soul Tour to Boca Raton’s Mizner Park Amphitheater Saturday, June 29. Read more about Tedeschi Trucks Band's return to Boca. 7 p.m. Saturday, June 29, at Mizner Park Amphitheater, 590 Plaza Real, Boca Raton; mizneramphitheater.com. Tickets cost $39.50 to $99.50 via ticketmaster.com. 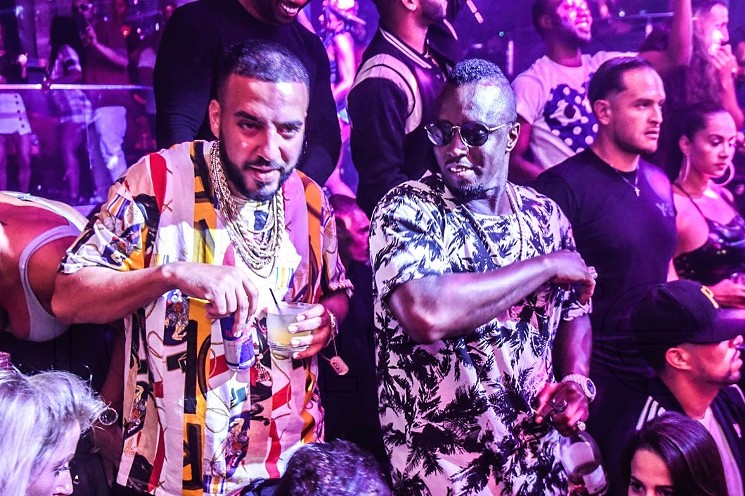 French Montana and Diddy
World Red Eye
French Montana. Did you know that Karim Kharbouch, whom you might know as French Montana, was born in Casablanca, Morocco? The rapper ended up in the Bronx, where he founded Coke Boys Records and was discovered by Bad Boy Records and Maybach Music Group. He's made headlines for dating Miami's very own Baddest Bitch Trina, as well as Khloe Kardashian, but it's his music that has his fans tuning in for more. From 2007 when he was making mixtapes to 2013's two Grammy nominations to his appearance on NCIS: New Orleans just this year as himself, Montana is going nowhere. Catch him live at Story Nightclub for an unforgettable night out in the Magic City. 11 p.m., Saturday, June 29, at Story Nightclub, 136 Collins Ave., Miami Beach, 305-538-2424, storymiami.com. Admission costs $40.

Upstairs at the Electric Pickle. See more photos from the past ten years at the Electric Pickle here.
Photo by Karli Evans
The Electric Pickle Final Night: With Cassy, Will Renuart, and Tomas C. Will Renuart has had a lot of time to think about the imminent closure of the Electric Pickle since New Times last spoke to him. "I'm feeling more emotional," Renuart says. "I am ready for the break, but I'm taking in every moment and really appreciate it." Renuart says he's been trying to attend every event at the venue, taking the opportunity to not only appreciate it as an owner but also making sure to take breaks throughout the night and absorb it all as a patron. That's because this will be the last weekend for the Wynwood dance club, which will close after its final party on Sunday, June 30. Renuart says he's been overwhelmed by the response. "A lot of people are flying in that I didn't expect," he says. Read more about how the Pickle will close out a decade of partying this weekend. 10 p.m. Sunday, June 30, at Electric Pickle, 2826 N. Miami Ave., Miami, 305-456-5613, electricpicklemiami.com. Admission costs $15-$20.

Green Velvet. Alannah Myles sang about black velvet. Red velvet cake is delicious. What about Green Velvet? Well, that's yummy too. The techno artist is wrapping a busy month, one that has taken him to Barcelona, Montreal, Vegas, and a slew of other fun places. And this weekend, he'll perform a set at Space. The Chicago native and 20-plus-year vet of the music biz will be joined by Irish up-and-comer Rebuke. Check out all of "The Best Things to Do in Miami This Week" by Jesse Scott. 11 p.m. Saturday at Space, 34 NE 11th St., Miami; clubspace.com. Admission costs $20.

Jefferson Starship. It's kinda great when the spinoff of a great cultural cornerstone is as groovy as its original iteration. The world loved Jefferson Airplane, one of San Francisco's finest acts of the '60s and '70s, and then it loved the evolution of that Grace Slick-led act Jefferson Starship just as much. Created by the band's bassist Jack Casady and guitarist Jorma Kaukonen, Jefferson Starship had nine top 40 Billboard 100 singles and put out eight gold- or platinum-selling albums in ten years. Get soaked in nostalgia at the Jefferson Starship show at Faena Theater on Miami Beach — a perfect place to chill out to classic tunes on a summer night. 8 p.m., Sunday, June 30, Faena Theater, 3201 Collins Ave., Miami Beach, 786-655-5742, faenatheater.com. Admission costs $75.
KEEP MIAMI NEW TIMES FREE... Since we started Miami New Times, it has been defined as the free, independent voice of Miami, and we'd like to keep it that way. With local media under siege, it's more important than ever for us to rally support behind funding our local journalism. You can help by participating in our "I Support" program, allowing us to keep offering readers access to our incisive coverage of local news, food and culture with no paywalls.
Make a one-time donation today for as little as $1.