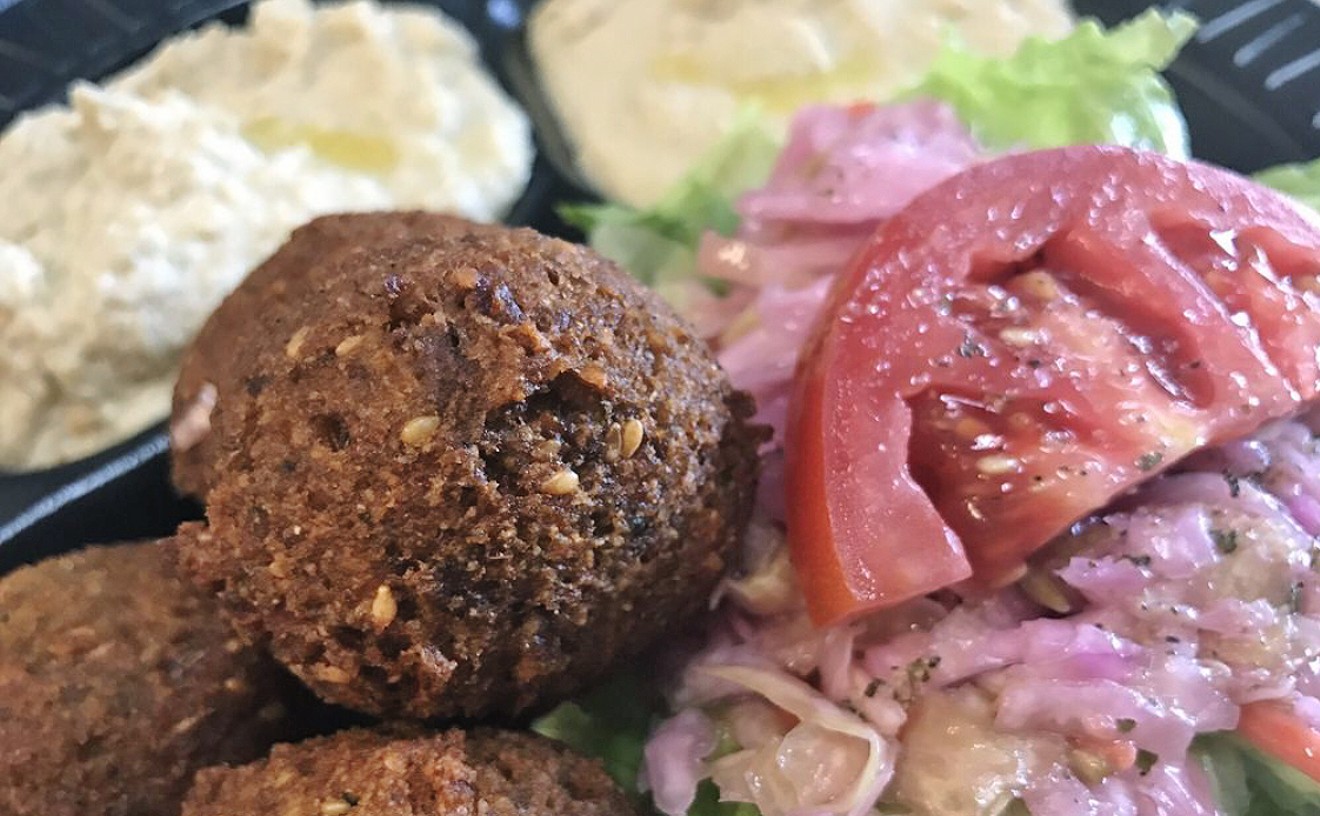 Long before Coconut Grove looked north toward Brickell's skyline while also grumbling about its own concrete-and-glass spires, the Mazzawi family began offering the neighborhood a delightful array of Middle Eastern and Mediterranean fare as well as a place to purchase all sorts of sundries from the part of the world that stretches from the Greek Islands past the Arabian Peninsula. Take a peek in the refrigerators that line the back wall of the space for seasonal specialties like green almonds while you wait for a falafel platter with fritters that balance emerald-green interiors fragrant with parsley and sumac with a crisp shell and a fluffy interior. Then there are the sweets — oh, the glorious sweets. Choose from four kinds of baklava ($1.50 to $1.75), cashew-filled mini roses (75 cents), the rosewater- and syrup-soaked semolina cake called namoura ($1.50), and more than a dozen other kinds of treats that will make you forget about the high price of cupcakes and macarons. 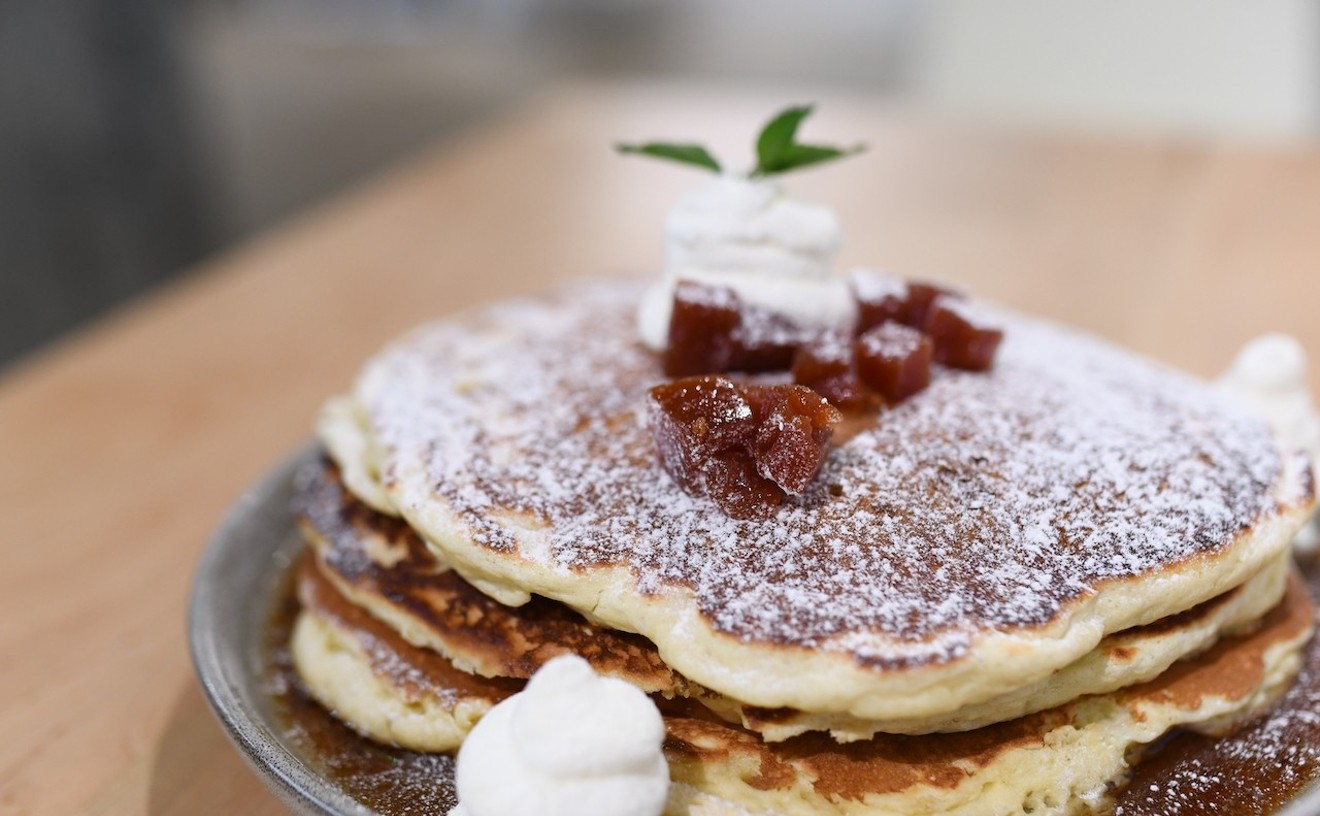 The masses flock to this quaint industrial spot just north of Miracle Mile for pastry wizard Antonio Bachour's bon bons, petits gateaux, entremets, macarons, and viennoiserie. Take one look and it's obvious why. They're perfection in sugar, so flawless it feels criminal to jab a fork through any one of the precious treats lit like jewels inside their glass classes. Match them with the savory dishes produced by the kitchen overseen by Herbert Schulz and Clark Bowen, and you're cocooned in elegance and well-executed comfort. The chefs at Bachour eschew the frou-frou, preferring to perfect the plates you know and love, the ones you turn to in times of joy and sadness, and to turn them into the best versions of themselves. You will never again look at Cuban sandwich the same way after you chomp through Bachour's iteration with prosciutto cotto, porchetta, turkey breast, pickles, Swiss cheese, and yellow mustard ($17). That pasta you boil for the family on Wednesday night will make you pine for Bachour's orecchiette bolognese with ricotta and breadcrumbs ($22). Do not be sad, just place your order. Note: Bachour recently opened an outpost in Downtown Doral. 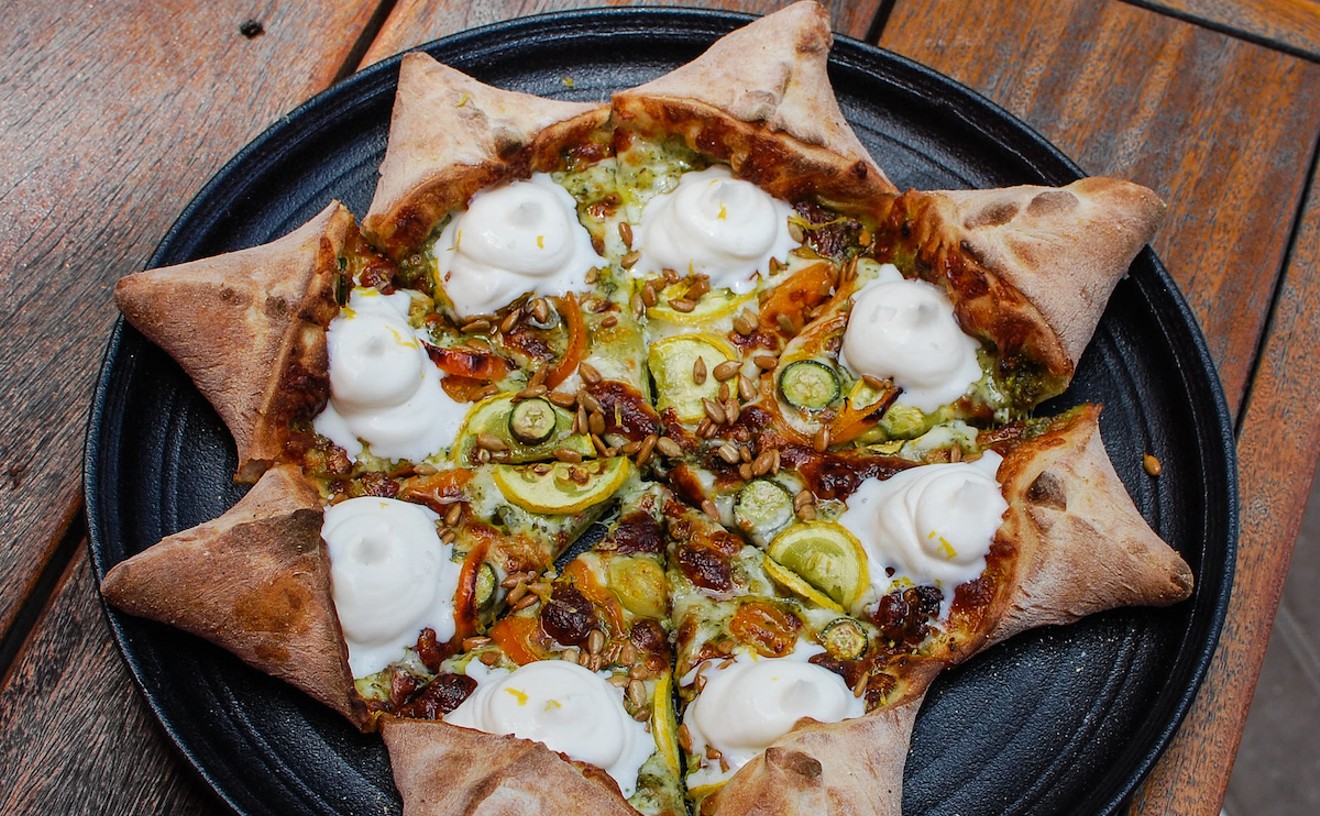 Top Chef vets Janine Booth and Jeff McInnis, the married duo behind Stiltsville Fish Bar and the southern comfort-food spot Root & Bone, have brought Miami yet another eatery. Mi'talia offers a family-friendly atmosphere that transports you to Italy's countryside. The menu is a compilation of fresh Italian flavors, emphasizing small plates, wood-fired pizzas, pastas, and shareable entrées. Stone-oven lasagna ($19) and veal Parmesan ($32) are classic preparations made with house-made, forever-simmered tomato sauce and fresh pasta. But no visit to Mi'talia is complete without ordering the sunflower pizza, whose toppings of cherry tomatoes, yellow squash, lemon zest, mint-and-pistachio pesto, ricotta, and sunflower seeds are arranged in the form of — well, order it and see for yourself. An early-in-the-week visit will net you daily deals like half-price bottles of wine (Monday), pizza night (Tuesday), and $12 pasta dishes every Wednesday. When the pandemic descended over Miami in March, Deme Lomas and Karina Iglesias smartly — if out of necessity — combined their two downtown Miami spots into one space that offers the best of Spain, the delicious and inventive creations that spring out of Lomas' head and kitchen, and a list of natural wines to shepherd your palate through a fermented wonderland. So sit, enjoy a few pours, polish off a cold tomato soup ($13); some foie gras with honey bread, apple textures, raspberries, and almond powder ($19); and try to forget — if only for a moment — the insanity held at bay by those glass doors. P.S.: Buy a round of beers for the kitchen for $5. Never a bad investment. 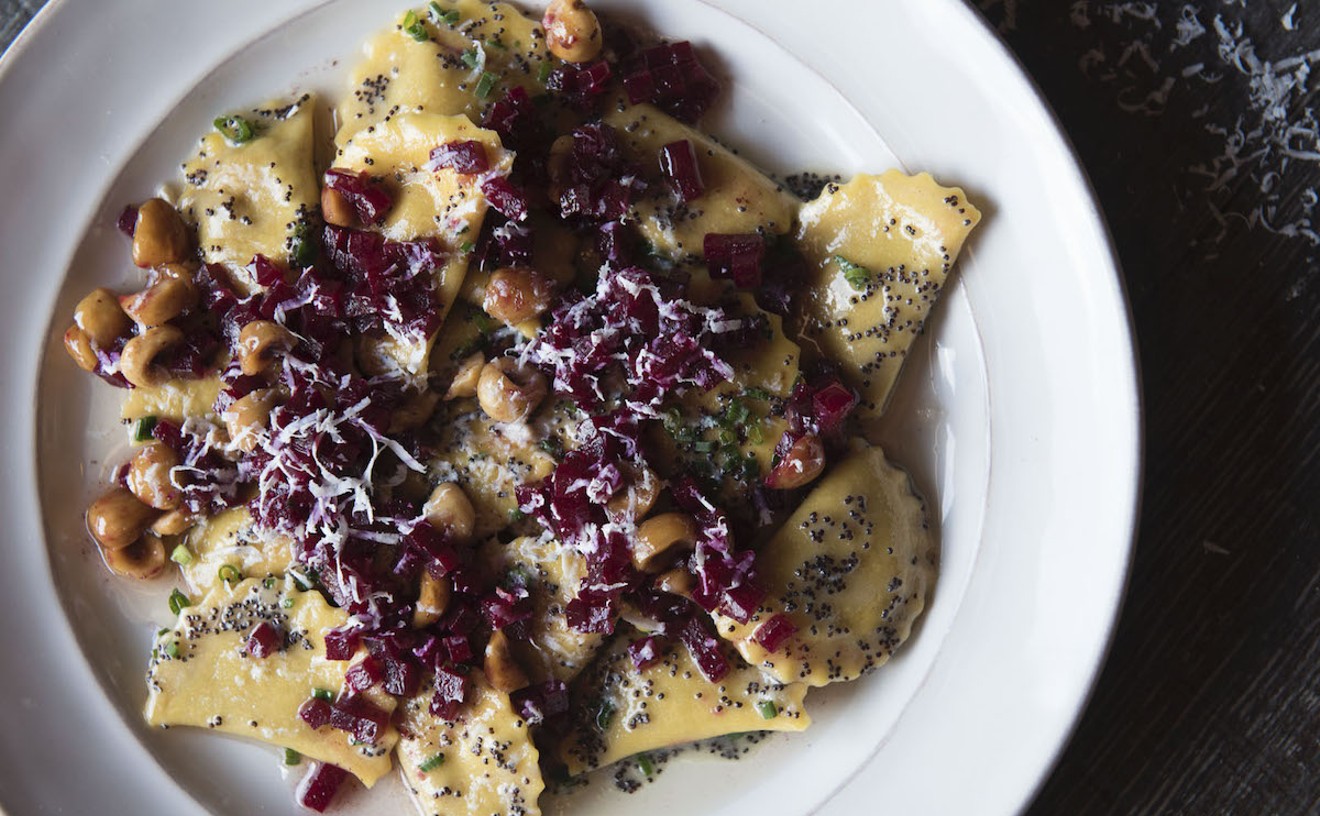 There's no better time than now to enjoy this longstanding South Beach Italian spot, helmed by Jacqueline and Michael Pirolo. While the latter handles the kitchen alongside a legendary team of pasta makers, the former has become one of the city's best-loved sommeliers. Here, the impulse for everyone is to pay attention to the pasta and only the pasta. Thursday nights before the pandemic were something of legend, with all of Pirolo's creations available for a mere $10 a pop. The novel coronavirus changed everything, but you can still get the Pirolos' fantastic pastas and pours in a onetime parking lot that's been transformed into gustatory oasis where, for a brief moment, you can forget all that's bad in the world and indulge in how things will be again.

Too often in Miami, Jamaica's fragrant and perfect-for-hot-weather cuisine finds itself relegated to hole-in-the-wall status. Perhaps it's just the Miami developers who overcharge overhyped chefs who cook overhyped cuisine. Everyone makes a buck and the diners suffer. Luckily, the owners of Dukunoo, a West African word for "sweet thing," bucked the trend and put pristine island fare smack in the heart of Wynwood. Under the watchful eye of owners Shrusan Gray, Leonie McKoy, and Rodrick Leighton, the kitchen turns out assertive version of classics like oxtails with broad beans and crispy onions ($36), as well as fun spins on them like ackee rolls with crispy snapper and escovitch vegetables ($16) alongside a jerk stand with chicken ($23), pork shoulder ($26) — or a bit of everything with fried plantains and slaw for $68. 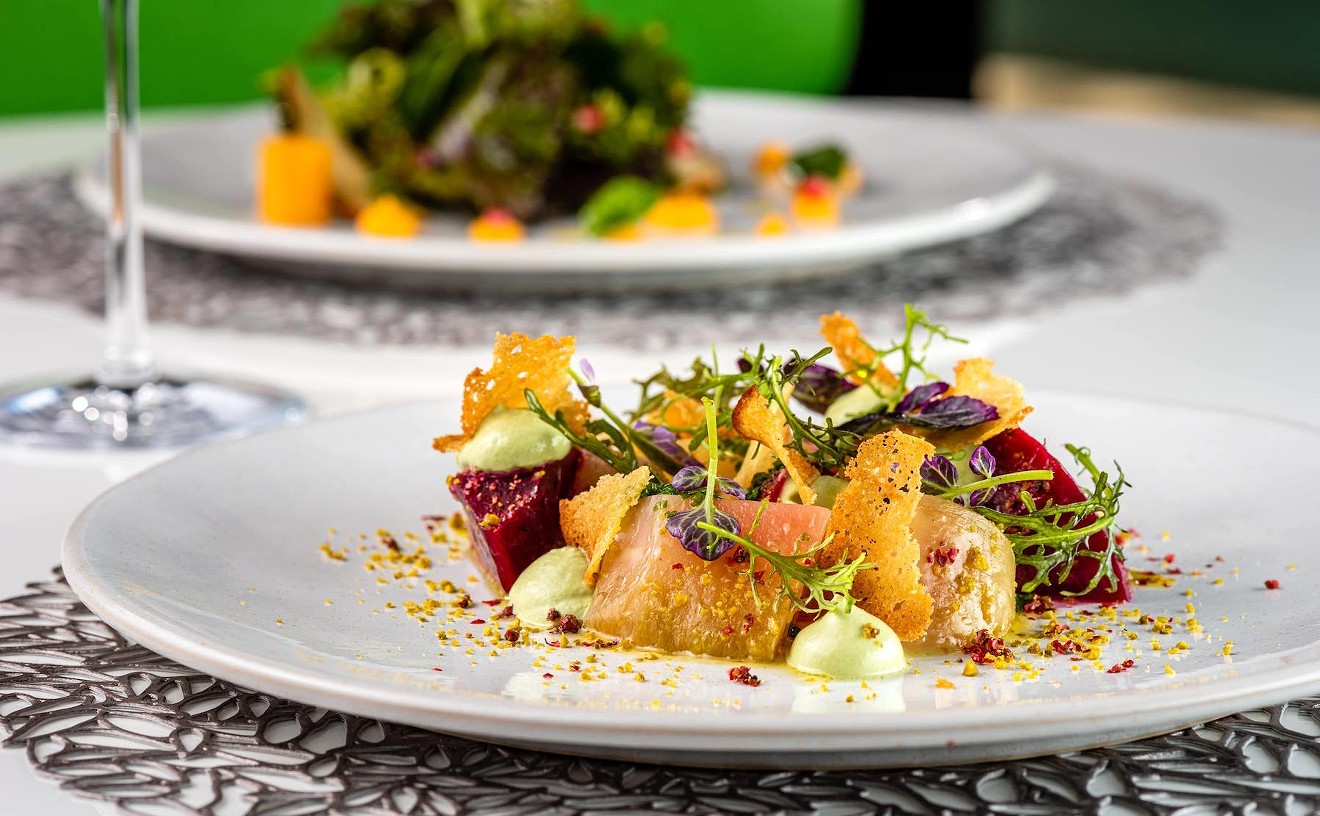 Le Jardinier is the way you want to eat. Ensconced in a small verdant courtyard scattered with white tables in a dead-end corner of the Design District, this hideaway is a garden within a garden. The restaurant, which is part of but also separate from the culinary empire of the late great Joël Robuchon, reflects its elemental décor with the expertly sourced produce that forms the heart and soul of its vegetable-forward cuisine. Purely vegan dishes are few and far between, but it's the attention paid to each and every ingredient — as opposed to just the protein on the plate — that elevates seemingly straightforward dishes to breathtaking. It's the way the vegetables are trimmed, peeled, blanched, poached, compressed, caramelized, whipped, puréed, roasted, rested, and served that turns humble combinations like fig, swordfish, and fennel ($28) and farro with parsnip, mushrooms, and hazelnuts ($22) into objects of edible luxury. 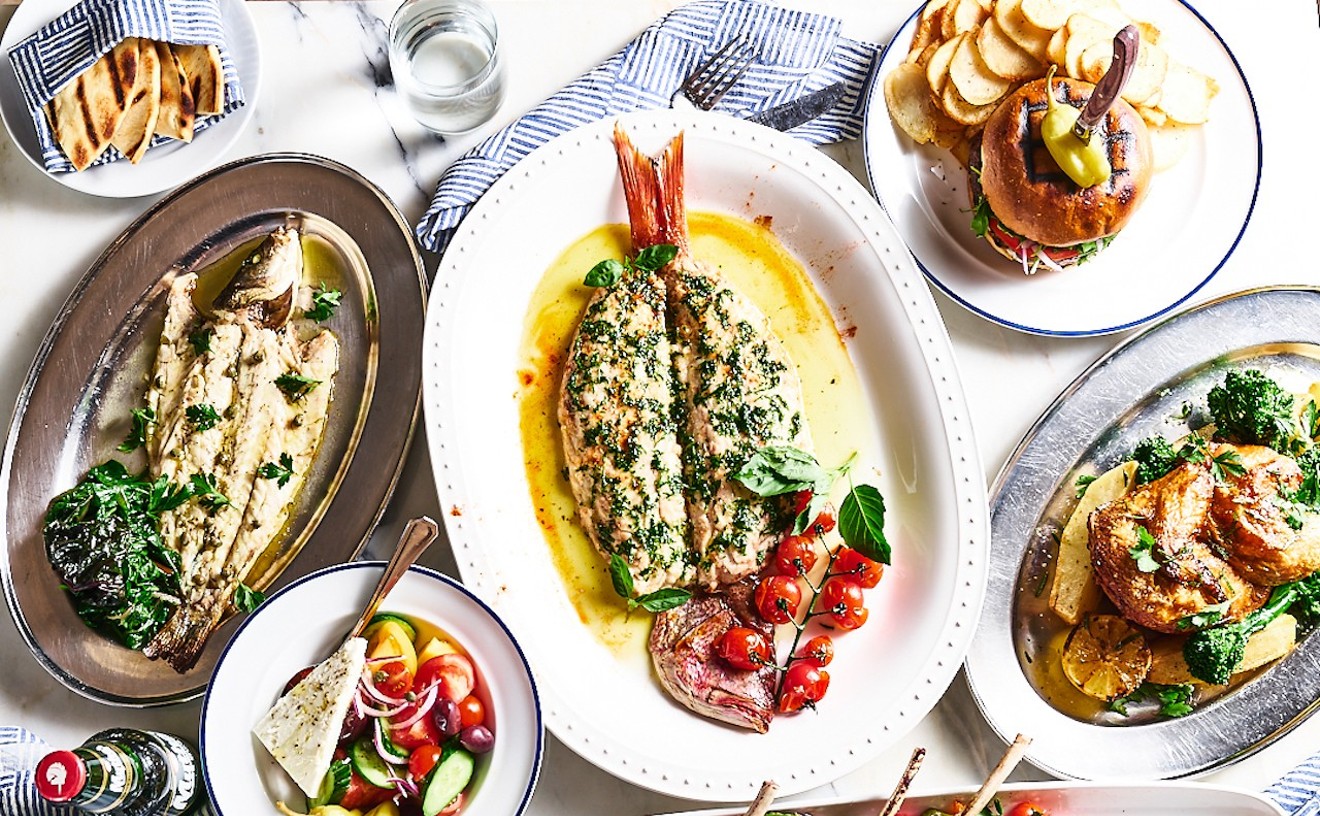 Michael Mina has created two of the most successful steakhouses in Miami. Now, the California-based restaurateur tackles Mediterranean fare with Ornos Estiatoro. The dining room, tinted in hues of blues and whites, resembles a tavern on a Greek island more than a mall restaurant. Whether dining inside or on the spacious outdoor patio, you'll find bright flavors infused with lemon and oregano. Start with a trio of spreads ($19) like tzatziki, hummus, and tirokafteri (whipped feta), while perusing the menu. Mina is known for the way he lovingly treats meats, so the grilled lamb chops ($47) are a succulent bet. But prepare to be tempted by the restaurant's own fish sommelier, who'll wheel over a cart filled with fresh local fish and Mediterranean varieties that are flown in daily. The pièce de resistance at Ornos may be the Maine lobster pasta, a shareable feast that consists of a whole Maine lobster served on a bed of linguine tossed in a slightly piquant sauce of fresh tomatoes, Greek brandy, and oregano ($48). Open Tuesday through Sunday. 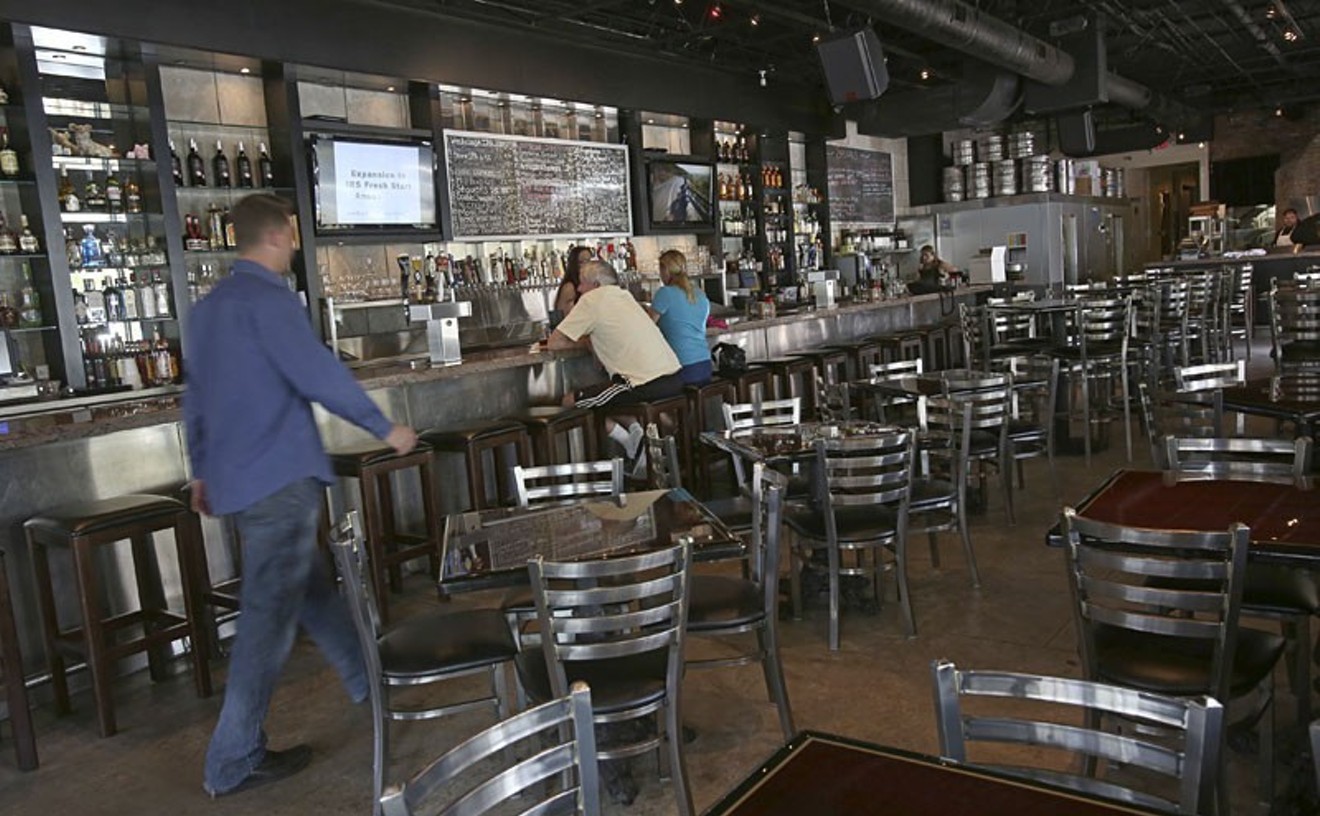 Picture the Cheers bar with 40 beers on tap and a wood-burning pizza oven. Go ahead; we'll wait. OK, you pretty much get the gist of Tipsy Boar. This Hollywood gastropub opened in 2002 and is still going strong thanks to its friendly staff, bartenders who can make a proper cocktail, and a menu of pub favorites. You can't go wrong with chicken wings or a burger but we encourage you to try something more interesting, like the Tipsy Boar burger, made with a boar patty and fresh bacon ($14), or crispy Peking duck wings with apple slaw ($14). Wood-fired pizzas arrive with a nice char and pair well with an IPA or other selection from the ever-rotating taps. Open every day, the Tipsy Boar offers a large, covered patio complete with TV monitors for your game-watching pleasure. 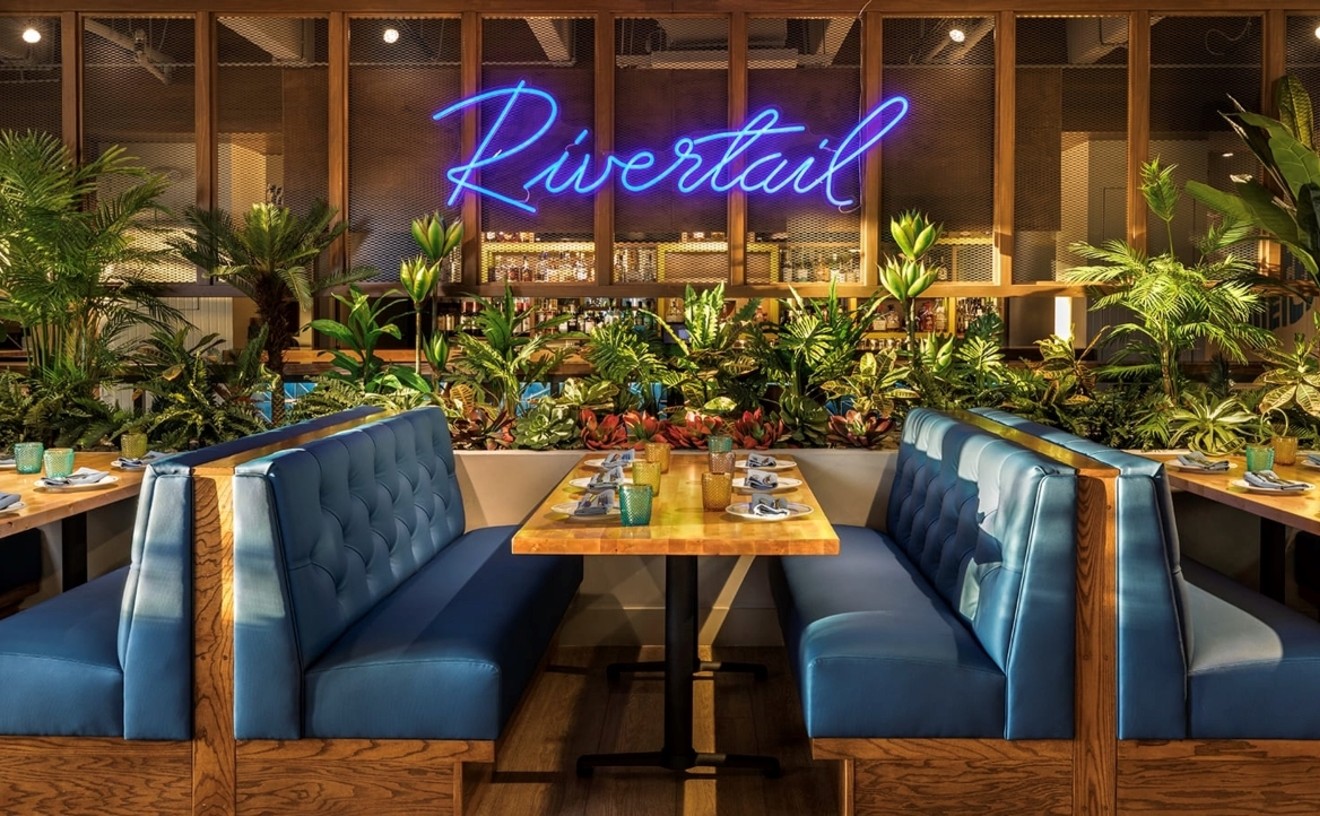 Miamians know José Mendín as one of the founders of the Pubbelly family of restaurants. The chef has won numerous honors, including "Best Chef Southeast" semifinalist status in the James Beard Awards five times over. Mendín has opened restaurants in Paris, Puerto Rico, and now, with Rivertail, he tackles Fort Lauderdale. The seafood-centric restaurant adheres to a simple philosophy: Offer the freshest fish and seasonal produce in a convivial, waterfront setting. A hamachi crudo ($16) bursts with Florida grapefruit and yuzu, while a Maine lobster roll ($25) is lightened with a hint of lemon zest. Fresh yellowtail, snapper, and other denizens of the sea are offered simply grilled with your choice of sauce. And, as if he almost can't help himself, Mendín offers a pork belly Cuban sandwich ($18), an apparent nod to his start at Pubbelly. Open Tuesday through Sunday.