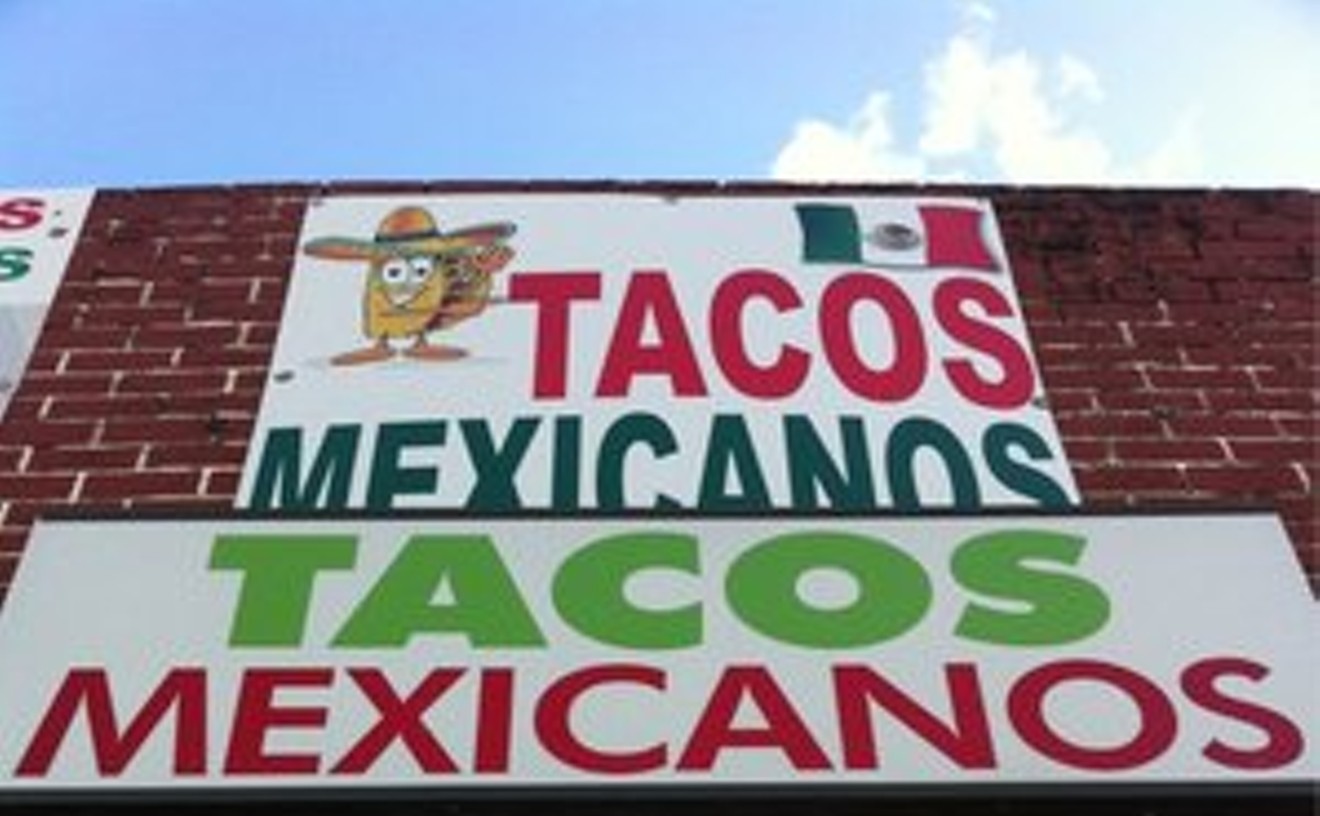 If tacos — somewhat shaped like mouths — could talk, there would be an argument of such epic proportions that every Mexican restaurant would be forced to give out free earplugs. The (marinated) beef would be between the Tex-Mex version of fast-food chains and the simple, authentic, ungarnished magic offered at a place such as El Carnal. The first, drowning in a sea of sour cream and iceberg lettuce, would be screaming for help, unsure of its identity as it resembles only a shell (a hard, fried one at that) of what it was in Mexico. The second would brag about its slow-marinated carne asada; pineapple-grilled pork al pastor; and seasoned cuts of tongue served in corn tortillas with an assortment of simple sauces from which to choose ($2). It would have all the reason to be smug, self-righteous, and pretentious in its defense of all that is authentic, but — served at a hole-in-the-wall street-food joint with space for only a handful of customers — it would choose instead to be simply welcoming.

She stared dejectedly at the empty basket in front of her. "It's gone. It's really gone." No matter how hard she tried, she couldn't fathom how she had fit that entire burrito — almost the size of an infant — inside her petite frame. "I just couldn't stop eating. I tried, but I just couldn't stop." We know, honey. All day long, stupefied customers sit in similar states of awe. The prices at Cantina are cheap (burritos range from $5 to about $8), but the ingredients are almost farm-fresh, the large pizza-size tortillas are made in front of you, and there's a plethora of burrito stuffers. Ingredients include spinach leaves, jalapeños, three kinds of beans, melted cheese sauce or fresh cheese, tomatoes, pico de gallo, guacamole, sour cream, banana peppers, red onions, and on and on. Cantina even offers brown rice and wheat tortillas for those so inclined. Douse your burrito with a half-dozen sauces from the delightful salsa bar. Most important, try the salsa verde, which might be the top tomatillo sauce in town.

Like Valentine's Day mystery chocolates or great novels, it's what's on the inside that counts when it comes to arepas. Sure, a good one calls for a perfectly charred and crunchy corn shell. But any half-decent cook who has wandered through Caracas or Bogotá can get that right. No, it's the fillings that really make the arepa. And Doña Arepa, as her name suggests, knows how to stuff 'em. A storefront in a bustling strip mall just west of the Palmetto Expressway on Flagler Street, Don Toston y Doña Arepa is a cute little eatery with rubber banana leaves for napkin holders and tropically painted walls. The arepas, which cost less than $5 (except a $5.95 shrimp version), come with the usual cheese, chicken, and shredded beef, but there's also reina pepiada (chicken salad with avocado), perico (eggs, tomatoes, and onions), and the sinful huevo frito con jamón (yup, fried egg and ham). But beyond compare might be the simple lechón — the succulent pork juices soak perfectly into the arepa dough.

Alex Broadwell
In the land of the food truck court, Dim Ssäm à GoGo is king. It also rules over the court of public opinion, as measured by the most scientific means possible: Lines are longer than those at any other truck. This speaks to the good taste of the masses. Peasants, royalty, serfs, and surfers alike queue up for Kurobuta pork belly bao buns with chili sauce; spicy tater tots; Korean fried chicken; kimchi egg rolls; and gingered Brussels sprouts. All items cost $8 or less."Munch and move on!" is the motto, and we dutifully do so. Richard Hales is the driving force behind Dim Ssäm. He also owns the restaurant Sakaya Kitchen and a second, monster Sakaya Kitchen food truck. We, the hungry masses, are grateful. 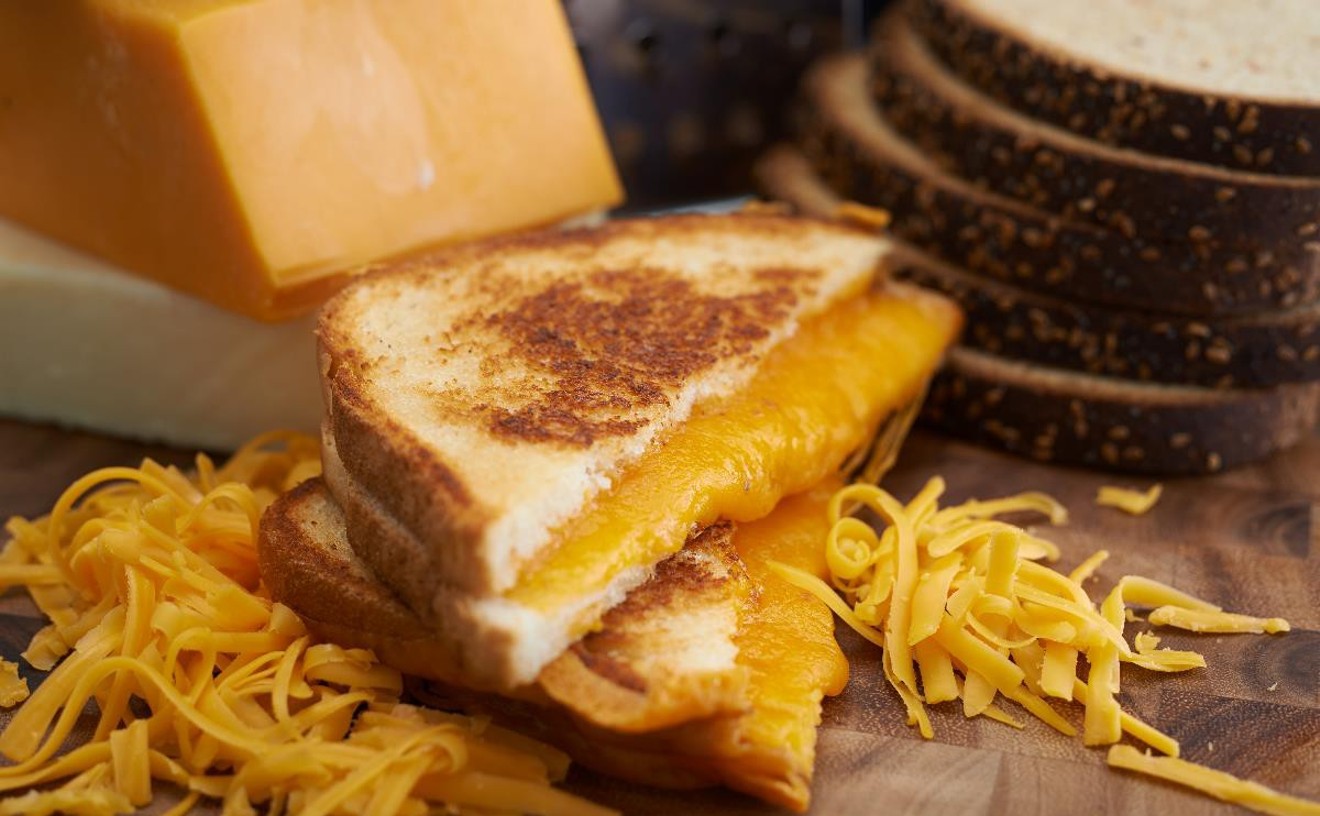 We're a little embarrassed. It's been a really long time since we were crushing bad enough to write an anonymous love letter. But we just needed to tell you: You are freakin' sexy! And, like back in the day, when we were just a young teen trying to conceal ill-timed wood in math class, we can hardly (see what we did there?) conceal our true feelings. Sure, you roll around town, day after day, clad in your polka-dot bikini and heels, a tatted-up, blond bombshell on wheels. And that's hot. But that's not even it. It's the way you play with our emotions that really turns us on. Flaunting your crabby cheese melt on sourdough, with its freshly made crab salad and oozing sharp cheddar, for only $8. Teasing us with cheesy delights such as that grilled harvest with spiced apples and Havarti on multigrain ($7) or the grilled blue and bacon ($7). On top of all that, you let us have our way with you too. You give us our choice of bread and cheeses including cheddar, Swiss, Gruyère, Brie, or provolone, plus add-ons like prosciutto, tomato, and tavern ham. Oh, you saucy minx, you! You've been a very, very naughty girl. 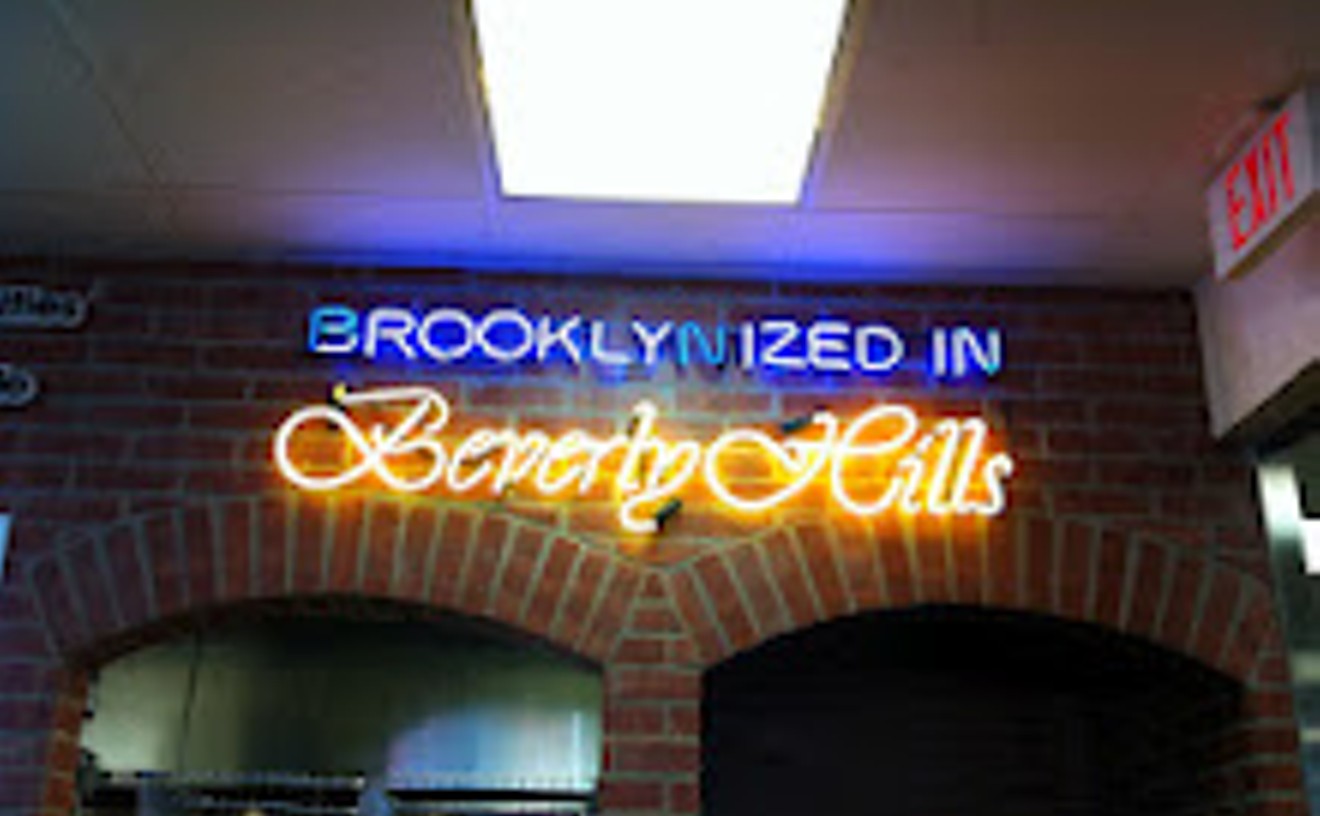 Einstein's makes a tasty roll with a hole in the center. New York Bagels and Brooklyn Bagels (no relation) are OK in a pinch. But the Original Brooklyn Water Co. bagels ($1.29 each) are the real deal: soft, malty, and yeasty inside, with a crisp, bronzed crust that comes from being preboiled. An in-house filtering system "Brooklynizes" the water — which as most folks from Brooklyn know, is kissed by angels (or is it rabbis?). The only part of the bagel that isn't a whole lot better than others is the hole. This new South Beach branch, the first in Miami-Dade, is open 7 a.m. to 4 p.m. on weekends (24 hours beginning this fall), makes all manner of bagel sandwiches, and like all OBWBCs, uses iced coffee cubes in its iced coffee. That's a Brooklyn thing.

Evolution (if you believe in it, and we'll pretend you do, because otherwise we'll point and laugh at you) is a beautiful thing. You might have heard of Garcia's on the River, but did you know that the Garcia family also owns La Camaronera? And last year La Camaronera gave birth to the latest Garcia baby, the Fish Box. Yes, just like mammals made the leap from sea to land, this family-owned business has spawned wheels. The Fish Box is part of the mega Miami food truck takeover covering the county in meetups from corner to corner and serving fantastic fried fish sandwiches. The $5 "minuta," as it is known by locals and other Fish Box devotees, is a traditional Cuban fried fish sandwich with the tail intact. A mere dollop of tartar sauce, ketchup, and onions add a subtle flavor to the butterflied bundle of fish fantastic-ness sitting atop a soft bun. Stay tuned for the next Garcia offspring.

If we're going to croak anyhow, we might as well eat the most fattening, sweet, savory, artery-clogging, gut-busting, sensory-overloading, greasy meal available at a place where we don't have to get dressed up, wait for a seat, or deal with a snotty server. Yep, we're hunting down Michell Sanchez in the Latin House Grill food truck for an embarrassment of riches. We'll sit cross-legged on the ground in our jeans and start with the "sneaky nachos," a meaty, cheesy taste-bud tantalizer decorated with crema. Then we'll move on to the coconut shrimp "flatton," perhaps the only coconut-encrusted shellfish we've tried that tastes more like fruit than a fryer. Next we'll scarf a chimi burrito with zesty carne asada, yellow "chuchi" rice, cheese, fried plantains, and a fried egg in a deep-fried tortilla. Finally, we'll wash it all down with a few bottles of Mexican Coca-Cola — you know, the kind with real sugar and not high-fructose corn syrup. For dessert, we'll savor the "teasers," fried tortillas with cinnamon sugar and a thick drizzle of sweetened, condensed milk. That and a few slices of guava-ricotta cake oughta seal the deal. Forget the Pepto — we're going down in a blaze of gluttonous glory. 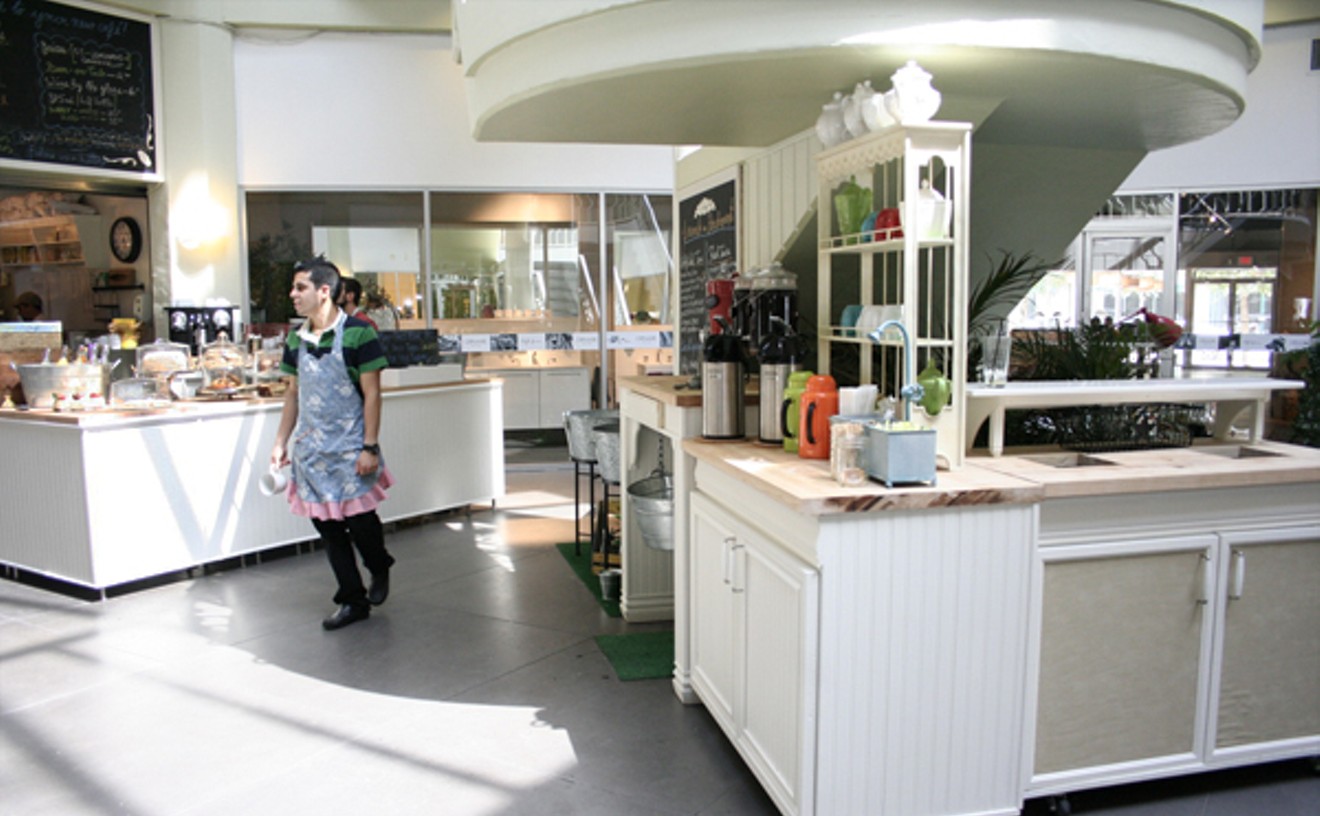 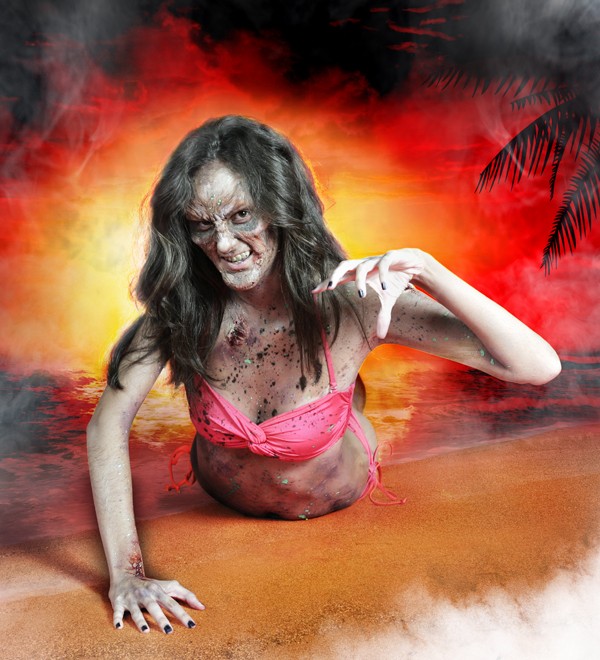