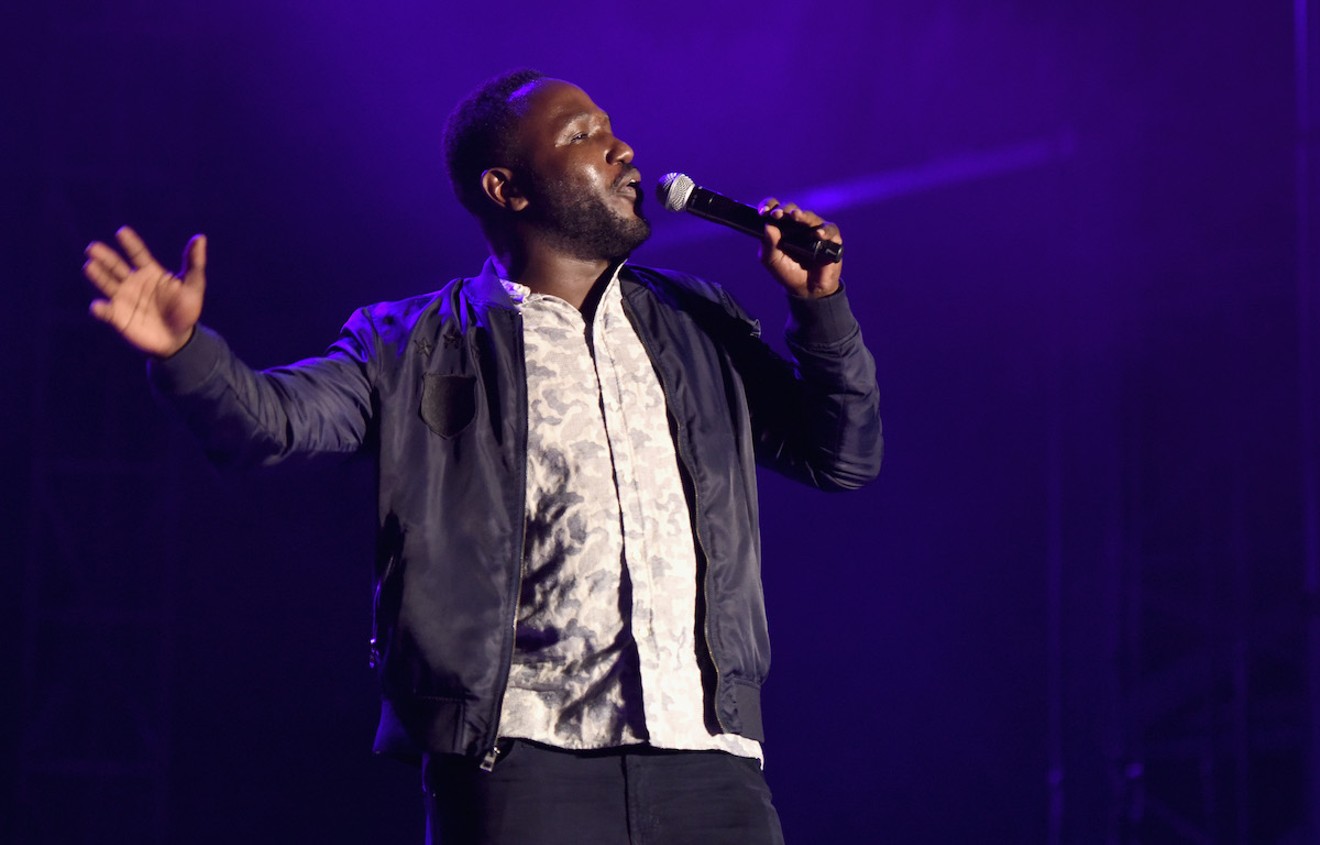 Hannibal Buress is coming back to Miami and setting the record straight. Photo by Vivien Killilea/Getty Images
Hannibal Buress has kept himself busy over the past few years, from taking up kickboxing in Thailand to hosting his theremin-laden podcast, The Handsome Rambler, to building the Melvina Masterminds arts center in his old Chicago neighborhood. He’s also spent time developing an interesting relationship with the Magic City.

Buress has performed so many impromptu sets at venues around town that he says he's begun to feel like a local. He also got arrested in Wynwood in December 2017 after getting drunk and calling a police officer stupid, which made him feel even more like a Miamian. Despite that trouble two years ago, Buress is returning to the Magic City, this time film his latest comedy special at the Olympia Theater Saturday, August 10.

Between now and then, he plans to do a few more East Coast dates from Orlando to New York. And as exhausting as all of that roadwork in less than a week might sound, it’s an important part of getting the set just right for the special.

“I’ve done some of this material for a while, but there’s still little tweaks that happen," Buress says. "After doing a joke for a while, you throw in a random line just to make it more fun for yourself, and then that hits with the crowd. It’s been fun. I’ve been kind of doing these shows on the fly; we put together this tour on pretty short notice, so I’m pretty hyped about it.”

Buress informed his fans about the Miami taping at the beginning of July, just one week after doing a pop-up set at Little Haiti's Villain Theater. His Olympia Theater comedy special will be the first he's produced himself.

“It’s nice to run your own stuff and run your own production. You learn a lot,” he says. “It is kind of a different feeling to see the project go from your idea to funding it and putting it together and then selling it... [In the past] I had a Comedy Central special, and I knew we had to shoot this day and it was on this production calendar and it would be on Comedy Central this day. You’re kind of locked into that work window. That’s a big shift. It’s been nice doing my own thing on this one.”

But the process hasn’t been entirely smooth. Saturday's set will be his second shot at filming his latest special. The first attempt was in February in Los Angeles, but Buress says the final product didn't have the right vibe. After scrapping that taping, which he describes as “a very expensive dress rehearsal,” Buress was left to decide whether to try again in L.A. or film the special elsewhere. In the end, he chose to shoot it in the 305, in no small part because of his 2017 arrest in Wynwood, a bit he says is fun, absurd, and one of the wildest stories he has to tell.

"I kind of wanted to do the story in the place where it happened," he says. "I think it makes it more interesting to talk about it there, so I’m excited [for people to] hear my side of that situation.”

At the time of his arrest, Buress remained fairly tight-lipped about the incident. The charges of public intoxication in his case were eventually dropped, and there were no repercussions for Miami PD's Luis Verne, the arresting officer. New Times later reported Verne had been previously disciplined for choking a man and slamming his head into a railing in a Fireball-fueled rage at a Miller’s Ale House only months before arresting the comedian. For the record, it is not illegal to call a police officer “stupid as fuck,” but it is definitely illegal to slam a person’s head into a railing.

Asked if he’s heard about the cop’s Fireball frenzy, Buress pauses before saying, “Of course I did.” He breaks out into laughter. “We gon' get into that,” he adds. “We get into all of that in the show.”

Correction: This article has been amended to reflect that Buress' 2017 arrest happened outside of a Miami Art Week venue at NW Second Avenue and NW 20th Terrace, not outside Gramps.

Hannibal Buress. 7 and 10:30 p.m. Saturday, August 10, at the Olympia Theater, 174 E. Flagler St., Miami; 305-374-2444. Tickets cost $29.50 to $39.50 via olympiatheater.org.
KEEP MIAMI NEW TIMES FREE... Since we started Miami New Times, it has been defined as the free, independent voice of Miami, and we'd like to keep it that way. With local media under siege, it's more important than ever for us to rally support behind funding our local journalism. You can help by participating in our "I Support" program, allowing us to keep offering readers access to our incisive coverage of local news, food and culture with no paywalls.
Make a one-time donation today for as little as $1.