Miami, get ready for arthouse, anime, horror, sci-fi, cult classics, and more on a 53-foot outdoor screen in the middle of downtown Miami.

"My life mission was to give screen time to things that wouldn't normally get screen time," Estefan tells New Times.

Pandemic or not, Estefan — yes, the son of those Estefans — had plans to open a drive-in in Miami ever since he moved back from Los Angeles almost nine years ago, seeing the area's year-round tropical weather and paucity of drive-in theaters as evidence that this was his calling.

Estefan became a well-known celluloid maven, proving to studios, film labs, and archivists that he could be trusted with rare and delicate movie reels. His 35mm film endeavors, previously under the name Secret Celluloid Society, reached the Coral Gables Art Cinema, O Cinema, and Shirley's at Gramps, as well as countless one-off pop-ups like the time he partnered with Flaming Classics to screen Disney's Little Mermaid alongside a mermaid-themed drag performance at the University of Miami's outdoor pool.

Choosing to be his own boss and show off his very own reel-to-reel 35mm projection system, Estefan opened Nite Owl Theater in the Design District in 2017, then Firebird Theater in late 2019. Although these projects are now gone, Estefan believes they were great practice for what he's accomplishing today: running his own drive-in.

At the Nite Owl Drive-In, Estefan is no longer limited to screening films in analog 35mm. The outdoor movie theater sports a brand-new DCP 4K projector, displaying movies more crisply and clearly than most other outdoor theaters can.

"This has always been a safe space," Estefan says. "Seeing everyone realize that they're not just part of someone's business plan is great. I'm one of them. I'm the biggest movie fan of all time."

Since its opening in January, Nite Owl has shown a Criterion Collection's worth of movies, including the 1977 Italian horror Suspiria, The Lion King, Tenet, The Silence of the Lambs, and Cowboy Bebop: The Movie. 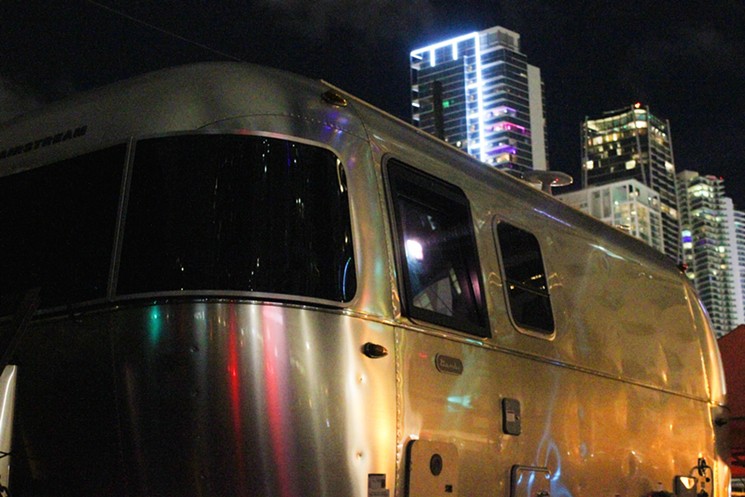 Later that year, during the grand opening of Nite Owl Theater in the Design District, Estefan hosted a screening of John Carpenter's The Thing. Just inside the entrance of the theater was a giant 35mm projector set-up surrounded by caution tape. Estefan could be seen switching out the reels throughout the night, reminding the audience how manually taxing analog film projection can be.

When asked if the new drive-in will be home to pre-show performances, mystery movies, all-night movie marathons, and general shenanigans, Estefan gives a mischievous laugh.

"I have so many things I'm cooking, I wish I could tell you, but I'd rather just blow you away," he says.

It's especially convenient that Nite Owl's opening came during the pandemic, giving movie-lovers a safe and unique way to watch flicks in a communal setting. Tickets can be preordered online at $40, which includes admission for two and a $20 voucher for concessions delivered directly to your car.

"We need it now more than ever," Estefan says.

All attendees need to do is park, tune into 87.9 for the audio, and sit back and enjoy.

Opening the drive-in was a long journey, and Estefan says he's grateful for the support that was required to get it done. Grants provided through Knight Foundation were used to acquire the new projector, and Fairchild Tropical Botanic Garden and Zoo Miami contributed to help protect the butterflies, birds, and owls that live in the 100-year-old trees at the drive-in's location, a rare green space in the overdeveloped area.

Comfortably nestled on NE 14th Street and First Avenue, the drive-in sits on a 60,000-square-foot lot next to WLRN studios and two blocks away from the Adrienne Arsht Center. The neon lights of the surrounding buildings give the setting a Blade Runner-esque vibe.

"It's amazing to see people come in who have no prior notion of anything that I've done," Estefan says. "It looks like they just boarded a UFO."

Whether you're a Secret Celluloid Society veteran or a first-time attendee, Nite Owl Drive-in promises to forever change the way you see movies.

Nite Owl Drive-In. 1400 NE First Ave., Miami; 833-648-3695; niteowldriveinandtropicalmarket.com.
KEEP MIAMI NEW TIMES FREE... Since we started Miami New Times, it has been defined as the free, independent voice of Miami, and we'd like to keep it that way. With local media under siege, it's more important than ever for us to rally support behind funding our local journalism. You can help by participating in our "I Support" program, allowing us to keep offering readers access to our incisive coverage of local news, food and culture with no paywalls.
Make a one-time donation today for as little as $1.