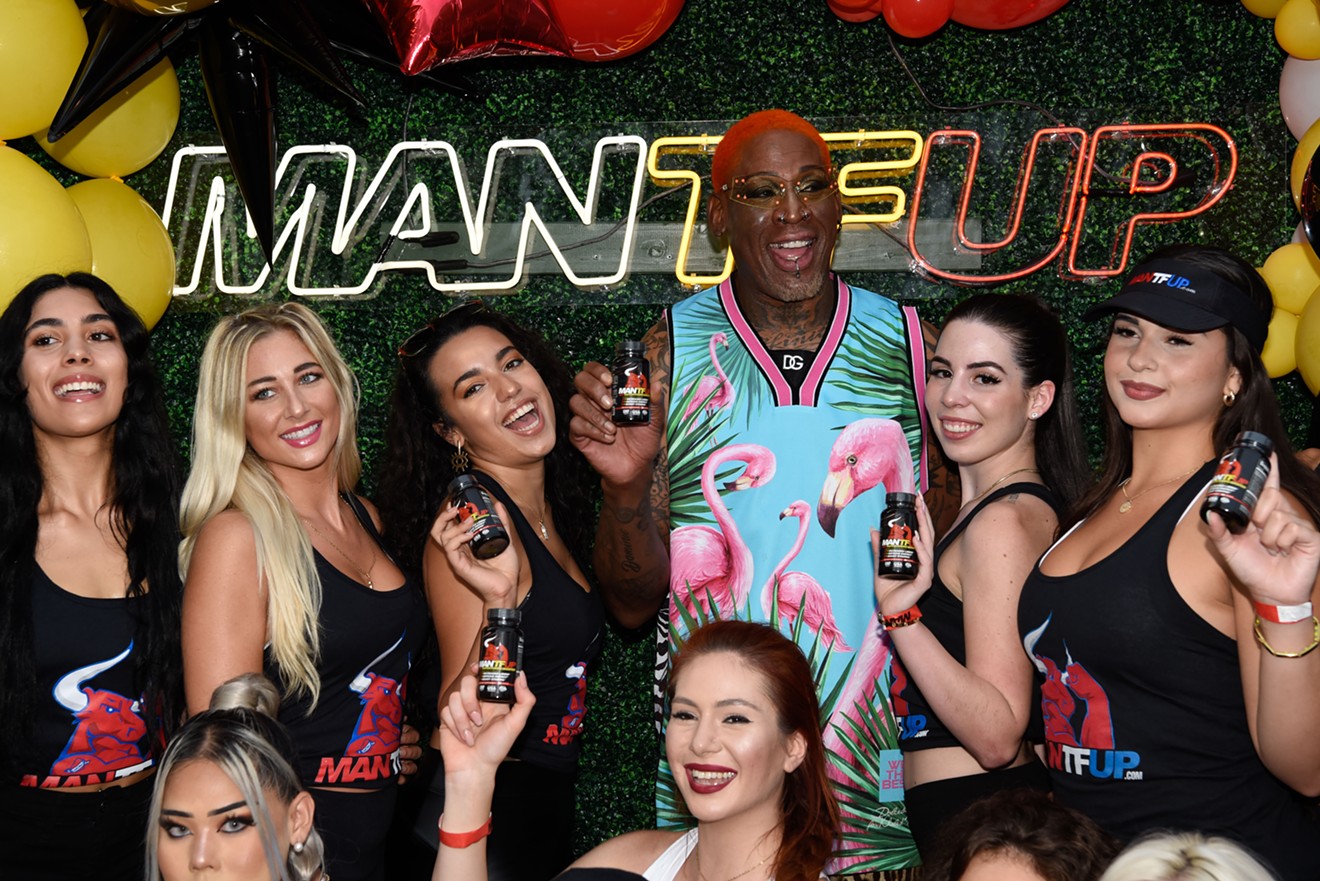 Dennis Rodman seems a curious choice to represent a brand called ManTFup, but who are we to judge? Photos by Michele Eve Sandberg/Courtesy of Dynamism Labs LLC
It’s 6:45 p.m. on Thursday, August 12, and the anticipation is palpable at Salt7, the waterfront eatery in downtown Fort Lauderdale where grown-ass men in plaid suits and Chicago Bulls jerseys pay no mind to the dozen or so professional hot girls gallivanting in matching black tanks and short-shorts. They’re awaiting the arrival of their cross-dressing leader.

“He’s got to have an entrance,” one guy sipping a Stella Artois tells his friend, who nods.

Another in tinted sunglasses turns to face the Intracoastal Waterway: “I bet he’s going to come in on a yacht.”

Club hits from the 2010s are blasting and the energy is reminiscent of teenyboppers at a Taylor Swift concert — only Dennis Rodman isn’t coming to croon about heartbreak. He’s here to push ManTFup, a men’s product line created by South Florida-based Dynamism Labs LLC that claims to “boost men’s strength, stamina, and energy.” Dynamism Labs offers a beard-growth supplement, but the brand’s founder and CEO Leonard Novelli tells New Times that the guest of honor and five-time NBA basketball champion takes the testosterone booster.

“A lot of men think, I’m not manly because I have to take this,” says Novelli. “That’s not true. You’re normal. There’s nothing to be ashamed of.”

Rodman fans scurry out of his way, opening up a path like in one of those viral videos of a shark swimming through a school of fish.
Photo by Jess Swanson
A woman with a clipboard whispers to Novelli that “he’s pulling up,” signalling the abrupt end of his marketing pitch. A sea of smartphones suddenly rises toward the heavens to capture the six-foot-seven icon exiting a black SUV. “Is he wearing a dress?” asks someone on tippy-toes. He’s not, but Freud would still have had a tizzy. Puffing a lit cigar, Rodman emerges, his hair dyed fluorescent orange. He’s dressed in a Dolce & Gabbana flamingo jersey, leopard-print slacks, tangerine-tinted shades, with white socks and black crocs. If you squint, you notice he’s wearing gold eyeshadow and black eyeliner on his upper lids.

Rodman throws up the peace sign and nods as his male admirers scurry aside, opening up a path like one of those viral videos where a shark swims through a school of fish. He’s directed to a staging area where he holds the tiny black bottle of testosterone booster in front of a neon ManTFup sign. The hot girls swarm around him, more props to pose with.

Rodman seems a curious choice to represent a brand called ManTFup — as in “man the eff up,” Novelli clarified earlier. Sure, as a professional basketball player, he led his teams to five NBA championships, but the Hall of Famer made nearly as many headlines off the court for serving as a de facto foreign ambassador to North Korea and for his exploits as a truly flamboyant eyebrow-raising dresser. Oh, and for announcing he was bisexual, marrying himself, and showing up in makeup, a white veil, and a custom-made wedding gown to promote his memoir, Bad as I Wanna Be.

“Yeah, I could’ve gotten Hulk Hogan — he is grrrrrrr,” Novelli says. “But Dennis transcends all. Nobody’s going to go up to Dennis and call him a pussy. He’s a tough motherfucker.”

New Times is the third outlet in line to interview Rodman, who at this point is sitting at a waterfront table with three women, and two bottles of wine in an ice bucket. Passersby on the Intracoastal’s public waterfront pathway do double-takes. Some of the fans in Bulls jerseys leave Salt7 and walk around the block to said pathway to snag a closer look at Rodman, who seems unfazed by the mid-pandemic spectacle of fans attempting to take selfies with him five feet away.

“He’s been in wedding dresses. None of it matters,” Novelli says. “He’s a man. He’s a man who loves women and sex in general.”

Though it's all more of the same snake-oil hooey one hears squawked daily on sports-talk radio, it seems rude not to ask Rodman about the supplements, even if one is temporarily distracted by the double nostril piercings and hooped lip ring that form a metallic holy trinity on his face.

“When you get to my age, 60 years old, your testosterone gets low,” he imparts. “You need a boost.”

Rodman says he began taking the supplements a couple of months ago and immediately noticed a difference. He says he started lifting more weight in the gym, feeling more energized in the morning and when he rides his bike.

Was he embarrassed to admit he needed to take something to boost his testosterone — a hormone that has come to represent masculinity and a measure of virility among his gender?

The question nearly causes two-time NBA Defensive Player of the Year Dennis Rodman to spit out his stogie.

“Embarrassed? Oh, hell no! Shiii— I’m not embarrassed about anything,” he says. “If I need help, I need help. And I needed help.”

And what does “manning the fuck up” mean to him — a man who has worn wedding dresses and sparkly tops with pleasure?

He shakes his head again in disbelief.

“No matter what you dress in, if you’re a man, you’re a man. Look at what I’m dressed in,” he says, pointing first to his flamingo jersey and then to his leopard-print pants. “I’m a woman down here, a man up there, and this makeup, whatever. I’m a man either way.

"It’s not a gimmick, honey,” he says as he turns away, signaling an end to our five-minute interview. “This is who I am.”
KEEP MIAMI NEW TIMES FREE... Since we started Miami New Times, it has been defined as the free, independent voice of Miami, and we'd like to keep it that way. With local media under siege, it's more important than ever for us to rally support behind funding our local journalism. You can help by participating in our "I Support" program, allowing us to keep offering readers access to our incisive coverage of local news, food and culture with no paywalls.
Make a one-time donation today for as little as $1.