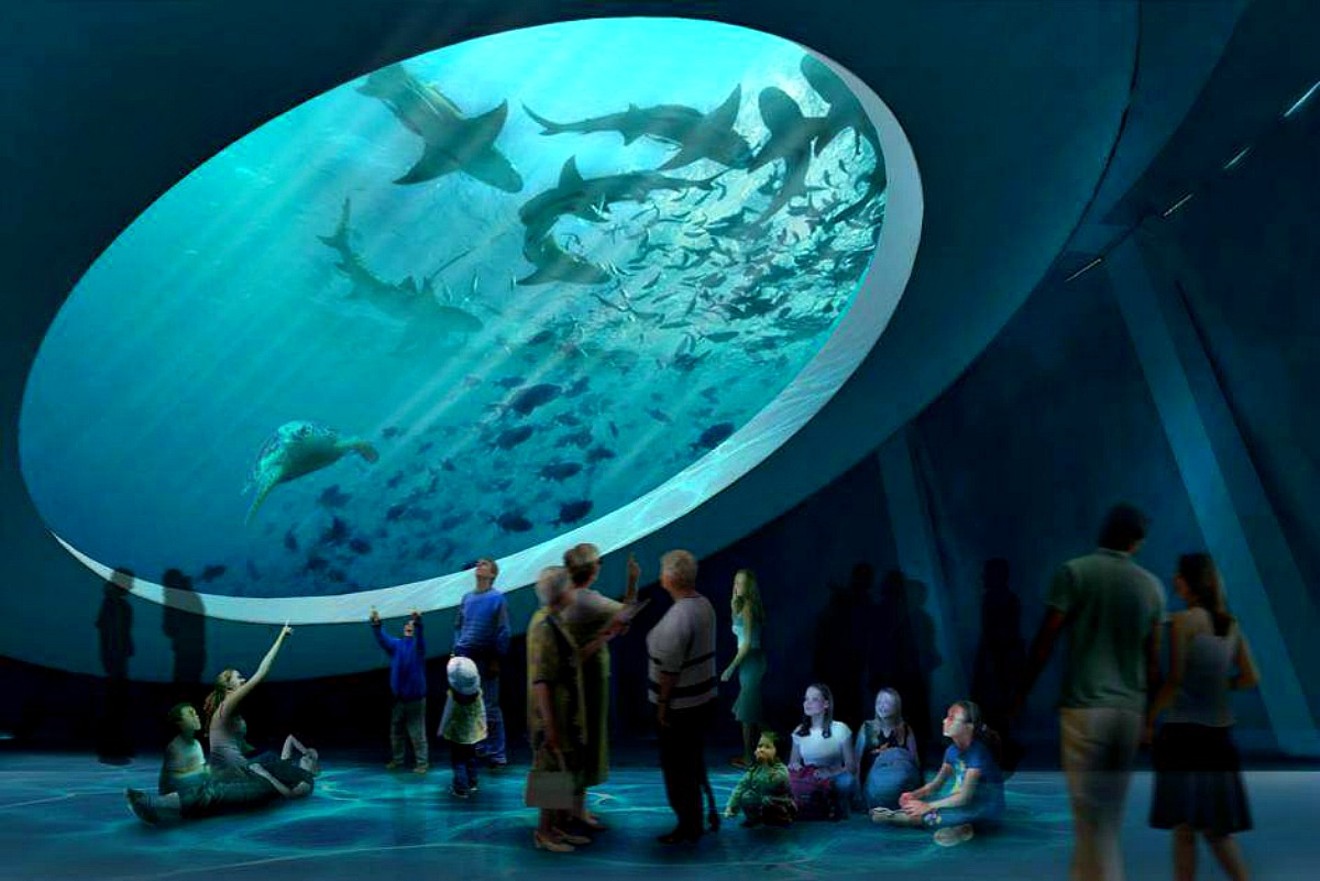 The martini-glass-shaped tank is the first of its kind. Rendering courtesy of Thinc Design
With a 31-foot-wide oculus lens, the Gulf Stream Tank is the focal point of the Frost Museum of Science's new downtown location. When the museum opens next month, this Cyclops-esque window will allow museum guests to peer into a 500,000-gallon saltwater aquarium and see a legion of Florida's most iconic marine creatures swimming. But local activists say it's inhumane to keep some of these animals in captivity, particularly crocodiles and hammerhead sharks.

The three-story aquarium's upper tier, called Vista, will be home to the hammerheads, along with lesser devil rays, cowfish, and moray eels. American crocodiles, a nearly endangered species, will live in the Mangrove Forest section of the enclosure. In Florida, there are about 2,000 American crocodiles in the wild, particularly in coastal areas.

The eclectic array of animals will be displayed to help promote greater conservation efforts for Florida's native species, museum employees say. "The goal of our collection efforts is purely educational and to provide guests with a face-to-face encounter with live animals, creating a connection to science and the rich ecosystems of our ocean planet while encouraging a deeper understanding of our world," a museum spokesperson says. "The Frost Science husbandry team has ensured water quality, health, and standard of living are at the highest quality for the new residents."

Though many locals are excited to check out Frost Science and its scaly critters, not everyone is happy about the new aquatic menagerie. Local animal rights activists argue that hammerheads and crocodiles shouldn't be placed in enclosures for exhibition purposes because larger predatory animals might be cognizant of their captivity.

"I’m disappointed because I thought the Frost Science Museum was going to be a different, more modern kind of museum," says Wendy King, who organized the anti-captivity march against Miami Seaquarium earlier this month. "There’s nothing natural or state-of-the-art about collecting animals for display, especially sharks and crocodiles, which do not fare well in captivity."

Crocodiles will live in enclosures that mimic South Florida's coastal mangroves.
Rendering courtesy of Thinc Design
King, who was initially excited about the aquarium's potential to draw visitors away from the Seaquarium, tells New Times she believes the Frost Science staff could use the nearby environment to teach visitors about native animals. "The museum is right on Biscayne Bay; it would have been cool if they could take visitors outside to check out actual local wildlife or do snorkeling sessions to see local fish."

Other animals at the Frost include lionfish and seahorses, which will live in the Dive, the midsection of the martini-glass-shaped tank, and translucent jellies, which will waft at the tank's base in an area called the Depths.

In response to criticism from activists, the Frost's spokesperson says that each habitat in the museum has been designed to accommodate its respective residents and that staff biologists will ensure the animals' safety and wellness:

"At the Phillip and Patricia Frost Museum of Science, our entire team is committed to the health, safety, and well-being of our invertebrates, fish, reptiles, and birds... Our habitats were designed to mimic the animal’s natural environment, and our staff provides excellent daily care, including full veterinary care."