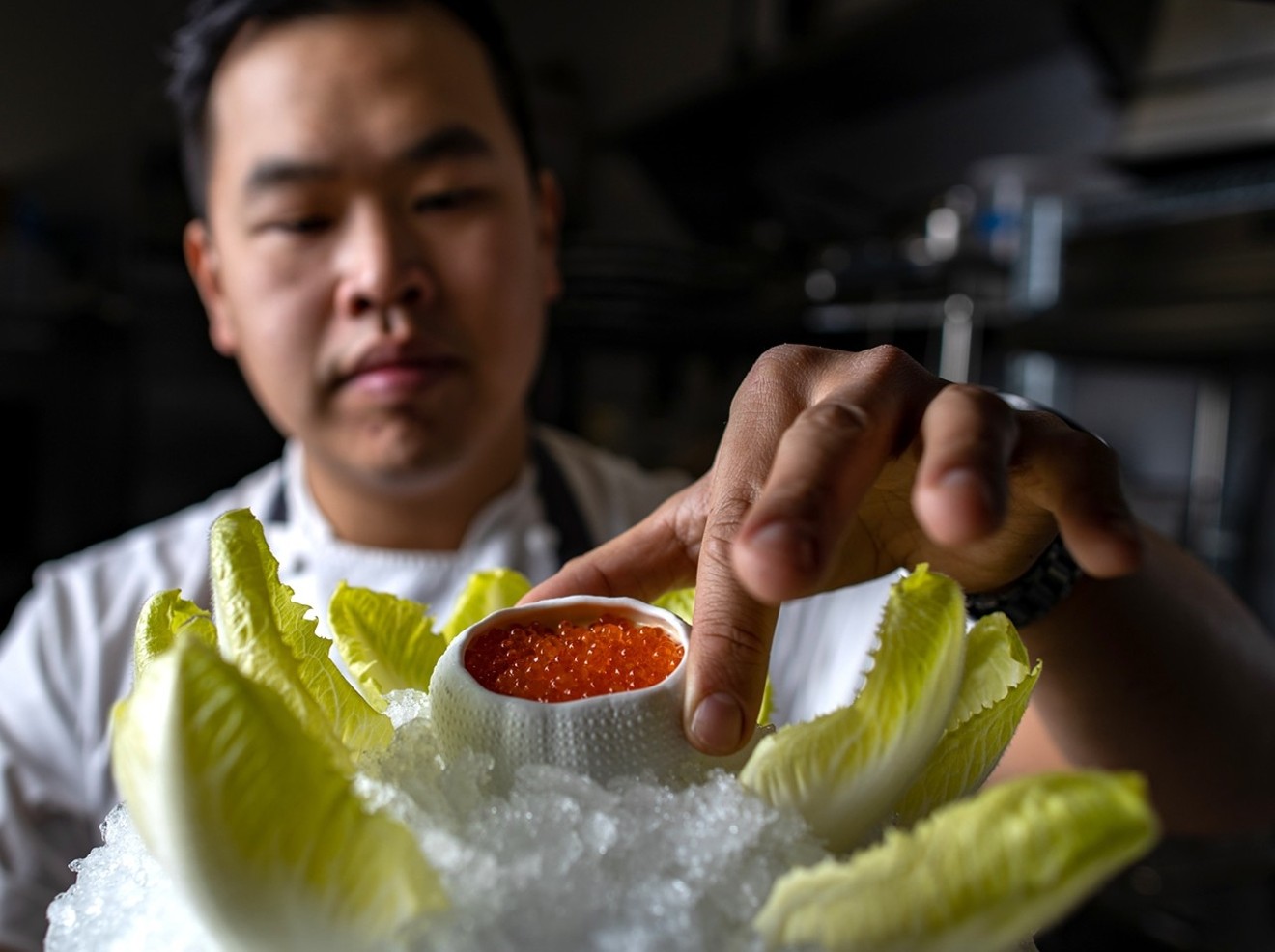 Buddha Lo credits his intense work with caviar as an ingredient with helping him win Top Chef season 19. Photo courtesy of Marky's Caviar
If you think going to culinary school to master techniques and concepts, apprenticing with demanding chefs, and working your way up the line to becoming an executive chef is the right way to win Top Chef, well, you'd be wrong. That's a good path toward achieving culinary prowess over a particular type of cuisine, maybe, or even opening your own restaurant.

But to own the Bravo TV reality show, you need a different formula altogether, according to Buddha Lo, winner of the recently completed Top Chef: Houston (season 19). The executive chef of South Florida's Marky's Caviar Lounge at the Seminole Hard Rock Hotel and Casino and New York's caviar speakeasy Huso inside Marky's Caviar on Madison Avenue — siblings of Miami's beloved Marky's Gourmet — maintains that competitors shouldn't really stick to one identity. "You can't be the master of one trade," Lo tells New Times. "You could be the greatest sushi master in Florida, but on Top Chef that is no good. You have to have range with Malaysian, French, Southern, and American cuisines. You have to know fine dining. You have to know humble. You have to know soulful."

Lo, a 30-year-old Chinese-Australian, has had the humble and soulful down since childhood. A native of Port Douglas in coastal Queensland, he grew up working in his family's Chinese restaurant, the Jade Inn. He also has the range: By the time he was 19, Lo was head chef at a leading restaurant in Melbourne. And he certainly has the fine dining: Before landing his position at Marky's restaurants in 2019, he worked at Gordon Ramsay's three-Michelin-starred London flagship and at the similarly lauded Eleven Madison Park (before it turned vegan).

But there are two other elements, Lo confesses, that gave him an edge.

For one, the workspace at Huso, where he spends a majority of his time, is a familiar one to a competitive arena: a ton of ingredients, makeshift tools, a single dinner seating for a set number of guests, and a limited amount of time to get dishes together. "We don't really have an existing kitchen. We have an oven that blends in with retail," he explains. "Servers wash up in the back, but we do service at the front. So for the amount of different foods we do, for the 14 guests, where everything has to be ready at the same time — it's exactly the same format as Top Chef.

Finally, Lo says, using caviar in every dish — a Marky's Caviar mandate — prepared him in an unforeseen fashion, the same way using a formal constraint inspires a poet: by simultaneously limiting him and freeing his imagination. Lo creates 32 new dishes with caviar annually, and nothing can be repeated from years past. "There are no references for what we do here," he says. "You can't pinch ideas from other restaurants, because no one else is really doing it. You have to create your own path. I thought about that a lot on the show."

His flexible imagination led to dishes such as a deconstructed everything-bagel dessert and his Southern-style Parker House rolls, both deemed "the best" in Top Chef history by host Padma Lakshmi. Other dishes that led to his win included his space flight-inspired, meringue-based dessert, "Apavlova 14"; and his "Marry Me" pasta, a tribute to his wife.

While Lo says his restaurants "didn't get a ton of bookings during the show," that changed after his win, especially at Huso. Currently, the wait list stands at 500, which Lo estimates will take them into August. And it's being added to every day.

The situation isn't quite the same at Marky's Caviar Lounge, where Lo writes the menu and oversees the kitchen. There, the restaurant is larger and more reliant on folks coming in to see shows than coming in to see him. But that may change as he increases his trips to South Florida in the coming months and slots his winning dishes onto the menu.

And a footnote for those wary of all things Marky's, which back in the day was called Marky's Caviar Russian Store: Lo notes that the family's background is Ukrainian and they stand with Ukraine — as demonstrated by the exhibition of signs and flags. The caviar comes from many countries, but not Russia (or Iran), as there has been a ban in the United States on Caspian Sea caviar since 2005 owing to overfishing. Marky's co-owner Mark Zavlasky also sources farmed caviar from his own Sturgeon Aquafarms in northwest Florida, which he established with Caspian and Black Sea stock before the ban went into effect.
KEEP MIAMI NEW TIMES FREE... Since we started Miami New Times, it has been defined as the free, independent voice of Miami, and we'd like to keep it that way. With local media under siege, it's more important than ever for us to rally support behind funding our local journalism. You can help by participating in our "I Support" program, allowing us to keep offering readers access to our incisive coverage of local news, food and culture with no paywalls.
Make a one-time donation today for as little as $1.