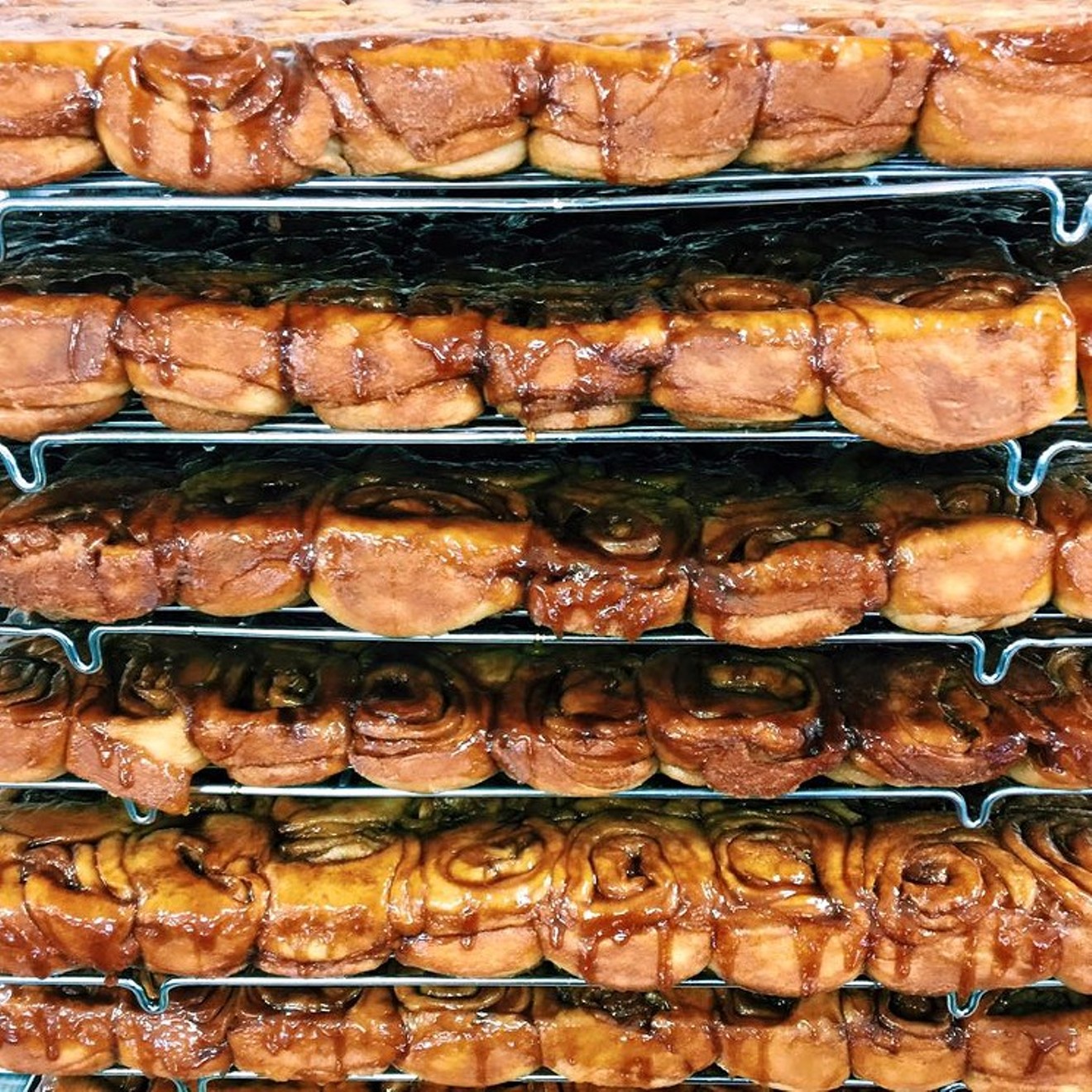 Photo by Donna Irene
Knaus Berry Farm is set to reopen for the season October 30.

The bakery that makes fresh, warm cinnamon rolls opens for service next Tuesday at 8 a.m. — "Everything's on schedule for the 30th unless something unforeseen happens. We want to make sure everything's working," says Thomas Blocher, who heads operations at the Redland farm stand.

In what has become a unique rite of fall, each year the farm reopens from its summer hiatus at the end of October, bringing the scent of sugar and spice to South Miami-Dade's farm country.

The rolls have a sizable fan base, with thousands of locals driving to Homestead on opening day for their first taste of baked goods.

Knaus Berry Farm was founded in 1956 as a roadside stand, where Ray and Russell Knaus sold berries. The brothers soon expanded their inventory to include pies, breads, and other baked goods when a fruit broker told Ray's wife Barbara that her cookies were good enough to sell.

Today the farm is still run by Ray and Barbara's children and their families, and Knaus has expanded to sell fruit shakes, local vegetables, and coffee. It also offers U-pick strawberries and tomatoes later in the season.

The vibe, however, is still very much the same as it was in the 1960s, Blocher says. "We want Knaus Berry Farm to still be Knaus Berry Farm. We're second-generation, but we feel more like trustees. We're noninnovators. That's not what we're trying to do." Blocher says the family looked into automation but decided against it. "It wouldn't be handmade anymore."

In keeping with tradition, Knaus will, once again, accept cash only and is closed Sundays. The farm is also closed Thanksgiving Day, Christmas Day, and New Year's Day.

There have also been nominal price hikes due to increases in supply costs and staff wages.

Knaus is also bringing back its pumpkin milkshake. A cinnamon roll milkshake is expected to follow, likely after pumpkin season. "Both are very popular," Blocher says. The farm will also offer its Sunday Supper series, beginning in December.

Though there's no sneaky way around the long lines for those oven-fresh cinnamon rolls, Blocher says the best time to make the trip is a weekday. "It's always slower than weekends or holidays." Still, expect a line, and be patient — the wait is part of the experience. Blocher reminds customers to bring an umbrella to protect from the sun or occasional rain shower. Chairs are also welcome, and don't forget to hit the ATM for cash before you arrive.

Blocher also suggests that people simply be kind and patient. "We're just going to bake as fast as we can, but we still want to put out a quality product."

How many cinnamon rolls does Knaus bake at peak season? "A lot," says Blocher, declining to give the exact amount. "Our employees are great people, and they work hard and we all enjoy being here, but we don't mess around."

If you decide to visit opening day, expect long lines, bring an umbrella and cash, and be patient. Once you bite into that first sticky, sweet cinnamon roll of the season, everything will have been worth it.

Knaus Berry Farm. Season opening at 8 a.m. Tuesday, October 30, at SW 248th St., Homestead; 305-247-0668; knausberryfarm.com. Monday through Saturday 8 a.m. to 5:30 p.m. Closed Sunday, Thanksgiving, Christmas Day, and New Year's Day.
KEEP MIAMI NEW TIMES FREE... Since we started Miami New Times, it has been defined as the free, independent voice of Miami, and we'd like to keep it that way. With local media under siege, it's more important than ever for us to rally support behind funding our local journalism. You can help by participating in our "I Support" program, allowing us to keep offering readers access to our incisive coverage of local news, food and culture with no paywalls.
Make a one-time donation today for as little as $1.