Amir Ben-Zion Creates a Village at the Vagabond Hotel

It was 5 p.m. Thursday, October 25, the day before Vagabond Sushi was to open, when Amir Ben-Zion addressed a group of employees finishing a wine and food tasting as part of their training. Ceramic cup of sake in hand, he told the two dozen servers and bartenders sitting around the circular bar that he had confidence in them. "We all came from this background, so we all know what we're doing. I've seen it all, and we're going to get through it together."

Ben-Zion, a compact man with a bald pate and an impish smile, has owned and operated some of the best-loved establishments in Miami, including Gigi, Bardot, and Bond Street. Just a year ago, he closed Bardot. He said it was for renovation, but the beloved venue has since been leased to Beaker & Gray's Ben Potts. Although that was the last of his hospitality projects, Ben-Zion has his hand in many Miami ventures, including the music festival III Points and projects as a developer and hotelier.

Just a couple of weeks ago, Ben-Zion returned to restaurants with the opening of Vagabond Village at the Vagabond Hotel (7301 Biscayne Blvd., Miami, 786-332-4991; thevagabondhotelmiami.com). And it might be the greatest challenge of his career.

The project consists of one restaurant (Vagabond Sushi) and several bars and lounges. Ben-Zion says he fell in love with the space years ago. "I had my eye on the property for a long time, but [local developer] Avra Jain picked it up. She's an amazing investor." In 2014, Jain restored the hotel, breathing renewed life into the MiMo District. 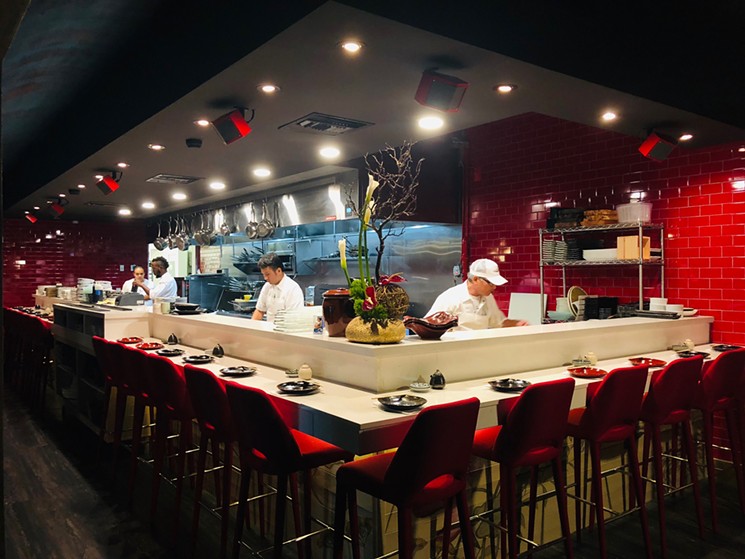 In January 2015, Vagabond Restaurant & Bar opened with wunderkind Alex Chang at the helm of the kitchen. Chang rose to fame after a documentary was made about the underground restaurant he operated in an apartment at the University of Southern California. Chang's Vagabond menu of chapulines (Mexican grasshoppers) and beef hearts proved too complicated for the young families living in the neighboring communities of Shorecrest and El Portal.

In July 2016, Chang left and the restaurant was renamed Vagabond Kitchen & Bar. Under the partnership of restaurateurs Fabien Chalard and Julien Geliot of Plethore & Balthazar in Lyon, France, the eatery offered American and French fare. Still, it couldn't attract a loyal following.

When Vagabond Kitchen & Bar closed this past April, Ben-Zion approached Jain with an idea: Instead of starting another restaurant, why not create a village?

"I didn't feel romance in the space when I walked in for the first time. Now I do."

The first part of Vagabond Village — the Oasis pool bar — opened about a month ago. Though the space was already lushly landscaped, Ben-Zion replaced the furniture and added a new sound system. It's hidden in the greenery, making it feel as though the plants are serenading you as you sip your margarita (cocktails cost $10 to $15).

Vagabond Sushi, which began service a couple of weeks later, is the centerpiece of the village. Led by executive chef Mike Hiraga, who worked for Blue Ribbon Sushi in Miami Beach, it churns out a menu of nigiri, sashimi, and other plates commonly served at izakayas (Japanese pubs). About 35 wines and 18 sakes are offered, in addition to a full bar.

Ben-Zion says Vagabond Sushi is designed to be neighborhood-friendly. "It's top-of-the-line quality with normal prices. In certain places in Miami, you can spend hundreds of dollars to eat fish. You will never leave here like that." He says he prides himself on giving guests good value and then refers to a nearby restaurant with a strong following. "Mandolin Aegean Bistro is a good example of a place I look up to. Consistent quality and flawless service. It's a great experience."

Ben-Zion is meticulous about detail. The sound system is designed to allow diners to talk, and the cooling system keeps the temperature at 69 degrees. On a recent visit, staffers were clad in uniforms in various citrus hues.

The menu's izakaya-style offerings are listed under the section "Start Small and Share." The watermelon kimchee and goat cheese salad ($8) is a colorful start; bright-pink melon cubes are topped with a dollop of fermented cabbage for a sweet-and-sour bite. Tempura shishito peppers ($10) are a good bar snack to pair with wine or sake over conversation with friends. Though the restaurant boasts a full liquor bar, a cocktail program has not yet been established.

Pan-seared scallops are plump and moist but not worth the $16 price for two. Instead, opt for the fragrant korin short ribs. More than a half-dozen pieces of tender beef, topped with thinly sliced peppers and sesame seeds, are a better value at $15.

There's but one offering in the "Go Big and Share" section. A 20-ounce cowboy steak, served with crisp yuca mojo, costs $54. The single steak seems mighty lonely on the menu, and a cursory glance at the "Small Share" section finds a few dishes — such as Chilean sea bass with fennel salad ($32) — that could move over and keep it company.

The sushi and sashimi offerings rightly take up most of the menu. They are simple and straightforward. Under the care of Chef Hiraga, the menu doesn't boast over-the-top sushi creations filled with mango and Buffalo chicken. You won't see massive bamboo boats filled with fish, either.

Instead, the restaurant offers hamachi sashimi ($5), which is firm and pink. The king crab roll ($14) is lilliputian. Some combos — such as the sashimi deluxe (an assortment of tuna, salmon, scallop, hamachi, madai, and aji or saba) and a platter of three kinds of salmon sashimi (Scottish, king, and Tasmanian) — are offered.

Inside the restaurant is the Vagabond Market, which serves an incredibly clever purpose. Uber food delivery people and customers picking up to-go orders enter it through a separate door. While paying for their orders, customers can buy cold beer, sake, wine, Japanese candy, and snacks to accompany their sushi, which renders an emergency stop at a supermarket for beverages obsolete.

A tropical patio dotted by palms and succulents welcomes diners to enjoy Miami's delightful winter temperatures. The restaurant is open nightly from 6 p.m. until 2 a.m., and weekend brunch is expected to launch sometime this month.

Before or after a meal at Vagabond Sushi, make your way to Brigitte. Also located inside the hotel, it offers an intimate bar and billiard lounge with a cocktail and spirits menu. Open nightly from 8 p.m. until 2 a.m. (or later during peak times), the space was decorated by Ben-Zion, who contributed many pieces from his personal art collection. Eagle-eyed guests might recognize the 1948 Brunswick-certified competition pool table from Bardot. The chic pink room can also be reserved for parties. There is no rental fee as long as patrons purchase food and drinks from the hotel. "I want people to enjoy themselves," the restaurateur says.

In the coming months, Ben-Zion plans to turn the hotel's underground bunker into a speakeasy. To access the lounge, guests must request a secret code via text. Once inside, they will find DJs and surprise guests.

Though comprising many parts, Vagabond Village seems surprisingly intimate. Ben-Zion has installed blinds to shield diners from Biscayne Boulevard traffic and divided the central restaurant space into smaller sections. "I didn't feel romance in the space when I walked in for the first time," he says. "Now I do."