Sashimi at MaryGold's Photo by Ruben Cabrera
There's no denying it: Wynwood is a food mecca. It's the place to go for Miami's most creative restaurants, craft breweries, and unique cocktails. From an omakase sushi meal to a world-class bakery that offers much more than bread, Wynwood's dining spots are as vibrant and diverse as the street art that covers the colorful neighborhood. B-Side by Itamae serves up innovative rolls with a Peruvian kick.
Photo by Fujifilmgirl

143 NW 23rd St., Miami
305-768-9826
1800lucky.com
Walk through a tiny record store/bodega to get to 1-800-Lucky, a 10,000-square-foot Asian food hall with indoor and outdoor seating. 1-800-Lucky offers several vendors serving everything from dumplings at Yip to pork sisig at Jeepney. B-Side by Itame is a must. Brother and sister Nando and Val Chang, along with their father Fernando Chang, serve up signature rolls like the "Lost in Translation," with tuna, salmon, avocado, tobiko, crispy quinoa, and ají amarillo aioli or the vegan "Tigre" with sweet plantains, piquillo peppers, and avocado. End your meal with Instagrammable ice cream from Taiyaki, served in a fish-shaped cone. 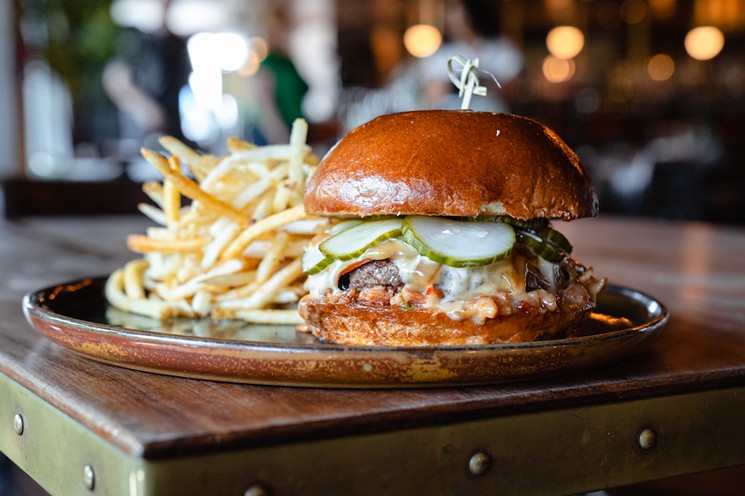 2637 N. Miami Ave., Miami
305-699-2637
beakerandgray.com
Beaker & Gray is a lively restaurant that places equal importance on its cocktail and food menus, thanks to partners Brian Nasajon and Ben Potts. Nasajon serves as executive chef, while Potts sees to the bar program. Cocktails come light and easy (shaken) or hard and heavy (stirred), with a good selection of mocktails as well. The food is significantly elevated from the usual pub grub. Favorites like chicken wings, fried rice, and gnocchi all come with a sophisticated twist. 42 NE 25th St., Miami
305-741-6991
cervecerialatropical.com
Wynwood is home to many breweries, but La Tropical is unique for its traditional Cuban beer recipes — and its food, created by Miami chef Cindy Hutson. Hutson is best known for her Coral Gables restaurant Ortanique on the Mile and has been cooking dishes tinged with the flavors of the Caribbean for decades. At La Tropical, she offers a Latin Caribbean-inspired menu that includes a fresh ceviche of the day, mussels steamed in La Tropical beer, fish tacos, and more. What brewery offers a whole fish or a ten-ounce, certified Angus churrasco? Only La Tropical. Pair your food with fresh beer brewed on the premises, and you have a win-win situation. 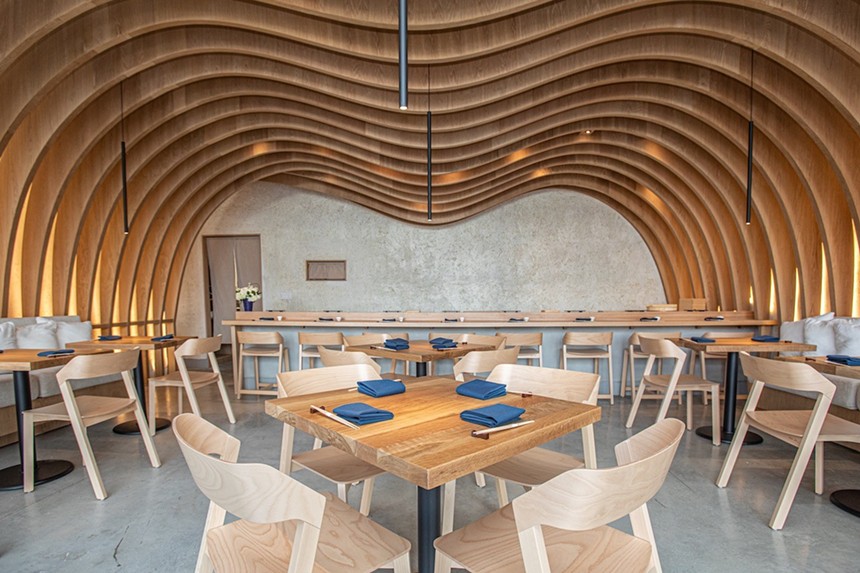 2700 N. Miami Ave., Miami
305-333-2417
hiyakawamiami.com
Art dealer Alvaro Perez Miranda has turned into one of Miami's most astute restaurateurs with his carefully curated collection of restaurants, including the excellent casual sushi restaurant, Wabi Sabi. At Hiyakawa, Perez Miranda's art aesthetic is in full view: The dining room is framed in curved wooden arches that resemble the inside of a whale or arc (whichever strikes your fancy). The food matches its surroundings in pristine beauty. Fish is flown in daily from the Toyosu Fish Market in Toyko, and a team of sushi chefs turns it into sushi platters or an omakase experience. 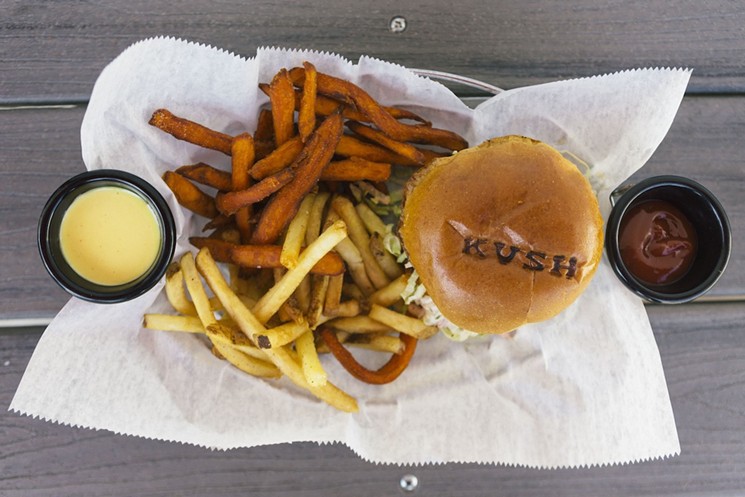 2003 N. Miami Ave., Miami
305-576-4500
kushwynwood.com
A veritable hole in the wall, Kush Wynwood may not look like much from the outside, but burger and beer lovers will find their own personal paradise here. Part of Matt Kuscher's growing empire of restaurants, Kush offers burgers made with locally sourced, free-range, antibiotic-free beef. There are also sandwiches, salads — even offerings for vegans. Kush is known for its well-curated beer selection, which includes 18 taps and a rotating list of "whales," or rare beers. The prices are customer-friendly, and the restaurant is dog-friendly, so don't be surprised if you have to wait for a table. The bar at MaryGold's
Photo by Chat Chow

2217 NW Miami Ct., Miami
786-522-6601
arlohotels.com
In the past decade, Miami's culinary scene has risen to new heights thanks to some creative individuals who have helped shape the way the magic city eats and drinks. Now, three of Miami's most talented — Bar Lab's Gabe Orta and Elad Zvi and Brad Kilgore — have formed a partnership at MaryGold's at the brand new Arlo Wynwood hotel. MaryGold's welcomes Kilgore back to Wynwood with a menu inspired by Florida's lush bounty, including grouper "al pastor," local mushrooms, and a catch of the day. Though MaryGold's is a fledgling restaurant, the gravitas of its team makes it an exciting addition to the neighborhood. 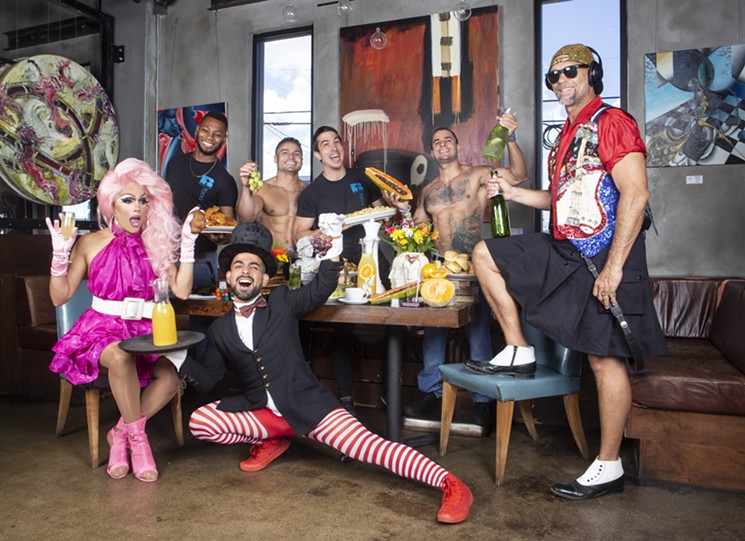 2727 NW Second Ave., Miami
305-576-0201
rhousewynwood.com
R House chef and partner Rocco Carulli has had a long-standing love affair with Wynwood that dates back to the days before the neighborhood became a hot spot. His restaurant is a hip, industrial-chic space with a menu that offers a series of Latin-inspired dishes, including an outstanding moqueca, filled with fresh seafood in a coconut-milk base. The high-energy restaurant also serves up innovative cocktails, including the Miami Delight, a layered cocktail that's engineering genius in liquid form. On weekends, R House comes alive with several drag shows: Yas Queen on Friday evenings, Escandalo on Saturday evenings, and weekend drag brunch on Saturday and Sunday afternoons. Doughnuts at the Salty
The Salty Co. photo

50 NW 23rd St., Miami
305-639-8501
saltydonut.com
Andy Rodriguez and Amanda Pizarro created magic in 2015 with the Salty Donut. These days, on any given weekend morning, sleepy patrons wait in line for a treat (or 12) from this small, artisanal doughnut and coffee bar. With doughnut flavors ranging from traditional buttermilk to maple bacon and booze-inspired creations, the shop has a borderline cult following. The Salty has additional locations in South Miami, Lincoln Road, and West Palm Beach (and even in Orlando and far-flung Austin, Texas), but Wynwood is the flagship location, the doughnut mecca. 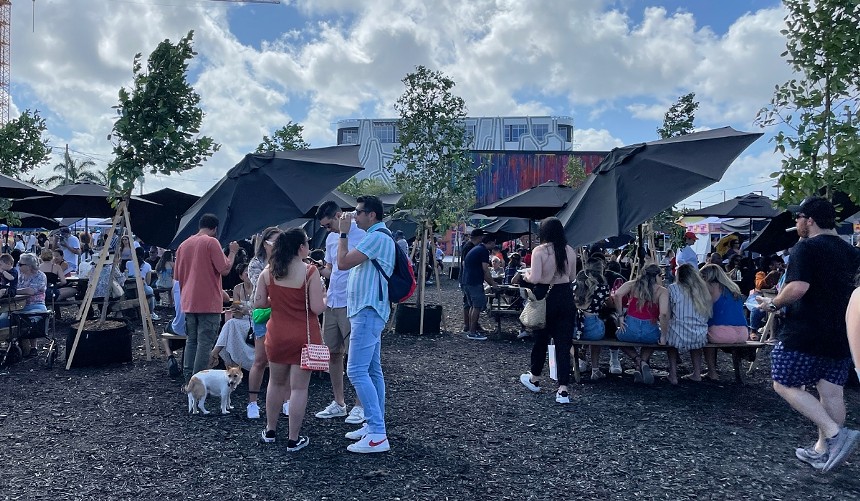 The crowd at Smorgasburg Miami
Photo by Laine Doss

2600 NW Second Ave., Miami
954-399-1583
smorgasburgmiami.com
The original Smorgasburg was born in Brooklyn's Williamsburg neighborhood (hence the portmanteau) in 2011 and debuted a branch in 2022 in Miami's own Williamsburg: Wynwood. Smorgasburg is part carnival midway, part food hall. What sets it apart is the selection of food. On any given weekend (Smorgasburg is open Saturday and Sunday), you can start with freshly shucked oysters, scarf down steamed dumplings, chicken heart skewers, hot chicken sandwiches, and a lobster roll the size of a kitten, then top it all off with ice cream. Smorgasburg also offers a small bar, a DJ spinning tunes, and a smattering of makers selling jewelry, candles, and other tiny treasures. Most of the vendors are up-and-coming restaurateurs who are using Smorgasburg as a leg up into the industry. So that ramen you slurp at a picnic table on Saturday might have been made by next year's James Beard nominee. So, bring your dog, bring your friends, and bring everyone you know — there's something for everyone at Smorgasburg. 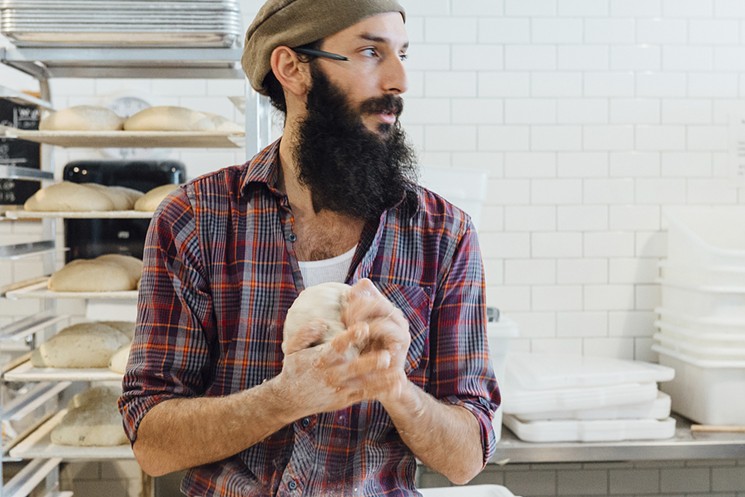 295 NW 26th St., Miami
786-294-0876
zakthebaker.com
Zak the Baker isn't your average coffee shop selling a few pastries. Miami's Zak Stern, a James Beard-nominated baker, has found his way into hearts and bellies through his perfectly baked bread. Nearly every Whole Foods location in South Florida carries a variety of Zak's signature loaves, cookies, and other artisan delights (like chocolate babka), and his mighty wholesale operation provides many local restaurants with bread for their sandwiches. At his Wynwood bakery, you can purchase loaves of freshly baked sourdough, grab a few pastries, and even take a seat for breakfast or lunch.
KEEP MIAMI NEW TIMES FREE... Since we started Miami New Times, it has been defined as the free, independent voice of Miami, and we'd like to keep it that way. With local media under siege, it's more important than ever for us to rally support behind funding our local journalism. You can help by participating in our "I Support" program, allowing us to keep offering readers access to our incisive coverage of local news, food and culture with no paywalls.
Make a one-time donation today for as little as $1.