Wagyu or Meat-Free? Miami's Coney Burger Does Both to Perfection 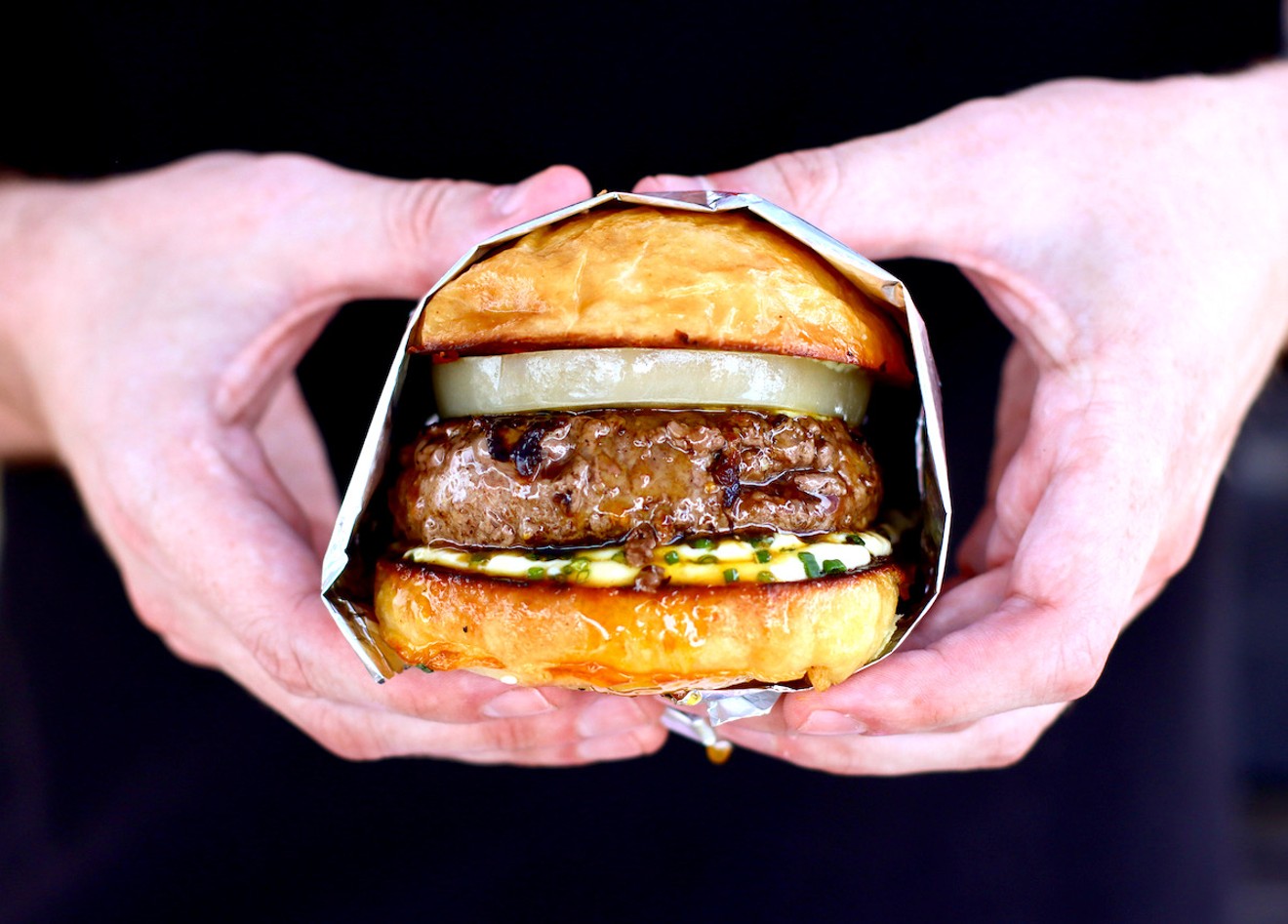 The Wagyu Burger from Coney Burger Photo by Nicole Danna
When chef Pedro Lara and his wife, Vanessa, emerged from the pandemic, they never dreamed they'd soon be peddling vegan fare at Smorgasburg Miami.

Today, however, they're equal parts of the creative team behind Miami's newest "it" burger, Coney Burger.

Each Saturday, the couple works through dozens of orders from hungry Smorgasburg guests looking for a taste of one of Miami's best burgers. The lines have been growing steadily since they took the win at the Smorgasburg Burger Battle on June 11.

Despite four years of studying industrial engineering, Pedro has always known his place was in a kitchen. Following graduation from the Mariano Moreno Culinary Institute in 2018, he began earning the title of executive chef at places like Pastel Gourmet, Palmar, and currently, La Natural Miami.

When Palmar closed, the chef took the helm of the owner's other concept, La Natural. But the couple dreamed of doing something creative together.

"When we heard Smorgasburg was coming, we knew we wanted to do something together," local marketing guru Vanessa tells New Times. "At the time, we were taken aback by the lack of good burgers, so we decided to create a brand and launch."

For Pedro, Coney Burger's short and sweet menu offers a chance to stretch his legs beyond the parameters of fine dining. (La Natural is one of several Miami restaurants to receive a Bibb Gourmand from Michelin recently.)

He says the challenge lies in offering a stellar version that speaks to both plant and meat eaters.

"When friends and family have different dietary preferences, it can be hard to find a place where everyone can enjoy a meal together," says Vanessa. "Part of our vision was creating a place where we could help bring people together through food."

"Our goal was to have two really good burgers — one vegan, one meat — without compromising on taste or texture," adds Pedro. "For that reason, we knew every element had to be something really special."

Since then, the couple has perfected the recipe, testing various iterations of each in their home kitchen, dialing in each element to create the ultimate burger.

Vanessa, the creative inspiration behind Coney's branding, says the name is a nod to Smorgasburg's New York origins coupled with her memories of growing up near and visiting Coney Island.

"For me, it was better than Disney World. I loved all the festival food, from giant corn dogs to big, juicy burgers," she recalls. 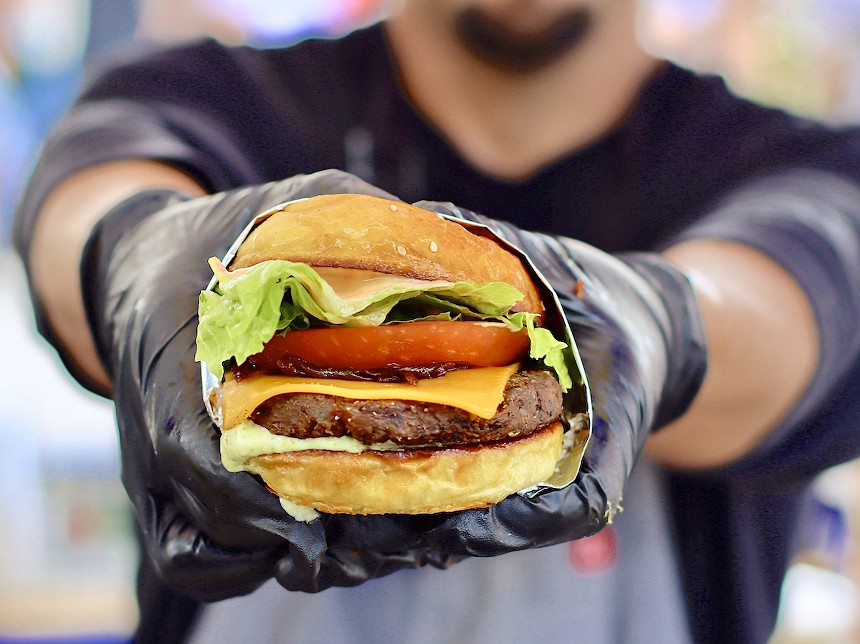 The eponymous plant-based Coney Burger created by Miami chef Pedro Lara
Photo by Nicole Danna
Today, you can find a rendition of each at Coney Burger, which operates as a regular pop-up at Smorgasburg and Epoca Brewing in North Miami. And, because all of the food is produced in a commercial kitchen facility, Coney Burger also offers delivery via several platforms, including its website and UberEats.

While both renditions offer up a different flavor profile, they share one thing: the bun. Whether you go with Coney's wagyu or mushroom-based patty, you'll get it on a vegan brioche bun. But don't worry — if given the choice, you wouldn't have it any other way.

Each from-scratch bun comes from a recipe fashioned after Japanese milk bread so that it's at once squishy and buttery — like a brioche bao. They're baked fresh beginning at 4 a.m. the morning before serving, with the last batch emerging from the oven just after sunrise.

Try it with the eponymous Coney Burger, the couple's pride and joy, a made-from-scratch mix that combines Japanese maitake and oyster mushrooms with sweet potato, black beans, carrot, and a special seasoning blend. A painstaking process begins with boiling fresh vegetables before being hand chopped, ground, seasoned further, and baked before being given a quick sear on the hot griddle before serving.

For the meat-eating crowd, the Wagyu Burger is quickly becoming one of Miami's finest burgers. The chef says it's an homage to one he created for Palmar that gained a dedicated following, with meat sourced from a local, family-run ranch in Homestead.

The Wagyu-bred meat is processed and hand-delivered to the couple fresh each week before they hand-shape and season six-ounce servings into puck-like, two-inch-thick patties. Each is lightly salted before it's thrown onto the broiler, juices sizzling into a tasty crust of caramelized fat. It's topped off with a thick-cut tarragon-seasoned pickled green heirloom tomato, the sour acidity meant to keep the fat from the burger in check. A schmear of the chef's egg yolk-based "happy sauce" produces a feeling its name suggests, married with the tangy-sweet house-made yuzu mayo and a sprinkling of chopped chives.

Take your first bite, and your brain will try to decipher each nuance from sour and sweet to salty and umami. Then you realize this is not a burger. It's an experience.

The menu also includes a spicy "chicken-less" sandwich, a whole oyster mushroom from Miami's Gratitude Garden fried in a traditional tempura batter, dipped in a house-made chili oil, and topped with pickled cucumber, fresh onion, and Coney sauce. There's also the flax and cornmeal-based vegan corn dog. And fries —  a trio of veggies (carrot, potato, and beet) that are fried and lightly salted. There are even some pretty sweet treats for dogs, including a bag of cookies made using sweet potato, chickpea, and peanut butter mixed with gluten-free flour.

"No matter where your eating preferences land or who you're with, Coney Burger was created so no one ever has to interrupt a good time over food decisions," sums up Pedro.
KEEP MIAMI NEW TIMES FREE... Since we started Miami New Times, it has been defined as the free, independent voice of Miami, and we'd like to keep it that way. With local media under siege, it's more important than ever for us to rally support behind funding our local journalism. You can help by participating in our "I Support" program, allowing us to keep offering readers access to our incisive coverage of local news, food and culture with no paywalls.
Make a one-time donation today for as little as $1.