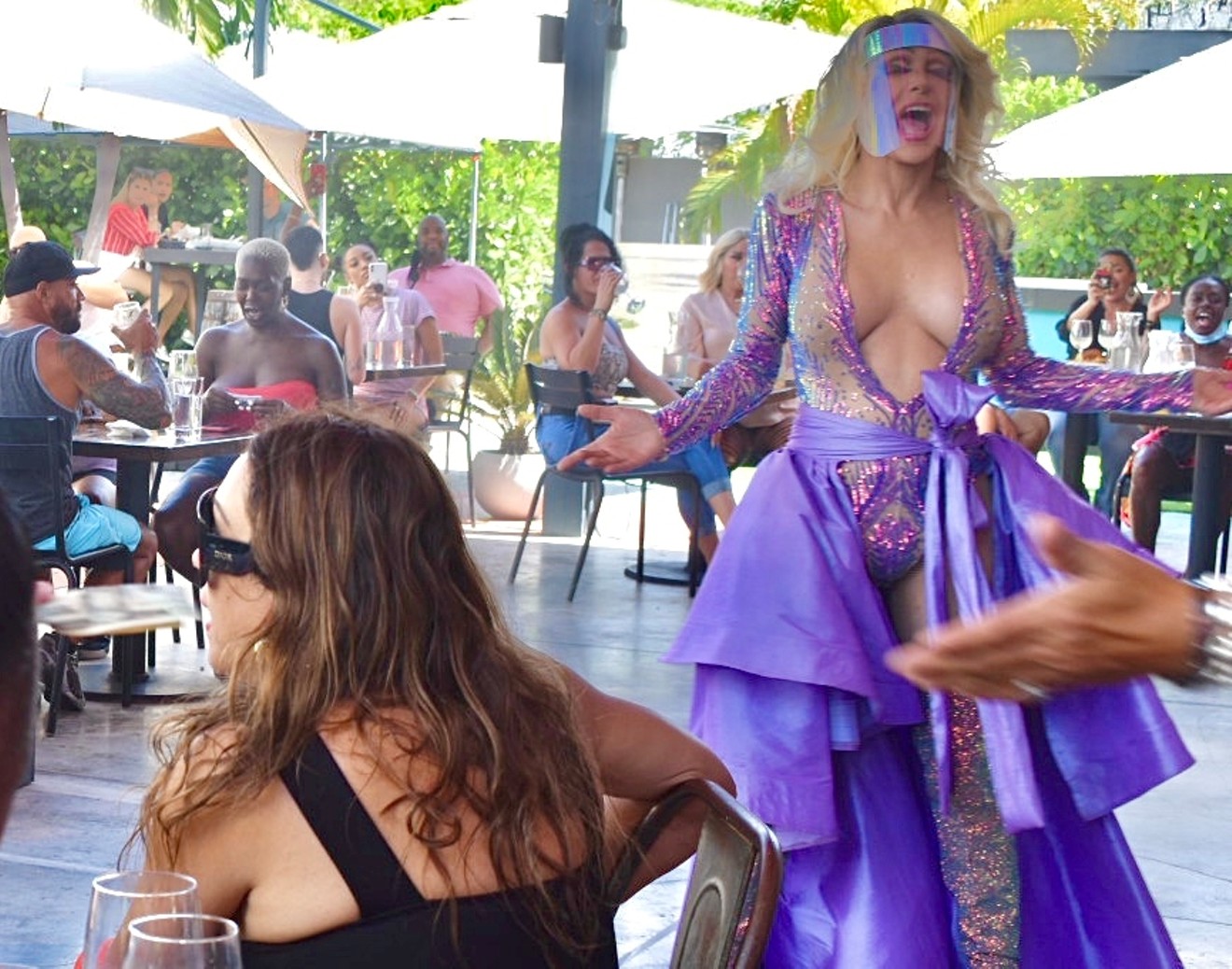 Erika Norell performs avec face shield at R House. Photo by Charles Pedroza
It's the middle of the Saturday-afternoon drag brunch at R House and the crowd applauds the arrival of a statuesque blonde clad in a spangled lavender ensemble.

In lieu of the typically de rigueur tiara or feathered headdress, an iridescent face shield frames drag queen Erika Norell's face as she lip-syncs to Pink's "Raise Your Glass." While Norrell would normally work the tables, dancing with guests and collecting dollars, today she performs on a makeshift stage while an assistant circulates among the well-spaced tables proffering a tip bucket.

Welcome to the new normal for a drag queen, says Athena Dion, hostess and producer of the weekly drag brunches at the Wynwood restaurant. When Miami restaurants were permitted to reopen for outdoor dining, R House co-owners Rocco Carulli and Owen Bale had to figure out how to make their popular weekend events comply with CDC guidelines and keep performers and guests safe.

Bale says the solution was to take advantage of the restaurant's 5,000-square-foot patio. "We opened the outside," Bale tells New Times. We never really utilized the area [before], but we brought in tents and fans."

In addition, performance spaces were delineated both indoors and out, and the indoor performance area was equipped with a Plexiglas shield.

While indoor seating was more popular before the pandemic, Bale notes that "now it's been flipped."

With a stage set and an outdoor area secured, one problem still remained.

"A drag queen's main job is to lip-sync. How do you do that when your mouth doesn't show?" posits Athena Dion.

The answer was a face shield — but standard-issue shields don't lend themselves to the unique challenges of fitting over teased wigs and staying on during an upside-down twerking session. "The face shield goes around your head with Velcro, and it was a challenge. If it comes too close to your face, there are makeup smudges, and the shield would go flying if the girls did acrobatics," says Dion.

There were many failed attempts before she figured a way to make the face shield work. "Girl, let me tell you. I think I could write a book on how to do drag during a global pandemic," she quips.

Kidding aside, safety was paramount — even at the cost of forbidding people to get carried away in the moment of a good show. Before each show, Dion announces the rules of the day.

"I say, 'Back in the good old days of 2019, we would work for those tips.' Now I instruct people to drink, make noise, and chair dance — but to put on a mask if they're going to get up.

Another COVID-19 concession: a virtual tip jar that allows guests to leave cash-app tips for their favorite drag queens.

The twerk-off, however, remains — albeit with a twist.

Normally during each brunch, Dion would invite guests who were celebrating a birthday, anniversary, or other special occasion to assemble in front of the stage for a twerk-off. Now, she says, "Everyone has to just stand up, put on a mask, and twerk by their chair."

Still, the show goes on, and the guests still come. Says Bale: "The volume rises and you can hear people laughing. Some people come up to me and say they felt like it was normal times again."

Bale says most people are happy to comply with the new rules. The restaurant stocks extra masks for anyone who forgets to bring one. "Honestly, people have been very good," he says. "This is the new normal, and we're having to get used to it."

Dion agrees. "After six months of quarantine and being locked down — combined with the current news cycle, you need a drag show more than ever. The happiness and excitement we help generate makes it worth it. People can find their escape while still feeling safe."

If anyone does grouse about the safety measures, Dion has this simple message: "Drag queens wear a full face of makeup, wigs, padding, and beaded dresses that weigh about 20 pounds. Add that we're dancing and jumping around outside in Miami in the summer, while wearing face shields. If you don't want to wear a mask, baby, get over it. The show must go on."

R House Drag Brunch. Seatings at noon and 3 p.m. Saturday, 11:30 a.m. and 2:30 p.m. Sunday, at 2727 NW Second Ave., Miami; 305-576-0201; rhousewynwood.com. Brunch packages start at $45 and include brunch, drinks, and show.
KEEP MIAMI NEW TIMES FREE... Since we started Miami New Times, it has been defined as the free, independent voice of Miami, and we'd like to keep it that way. With local media under siege, it's more important than ever for us to rally support behind funding our local journalism. You can help by participating in our "I Support" program, allowing us to keep offering readers access to our incisive coverage of local news, food and culture with no paywalls.
Make a one-time donation today for as little as $1.