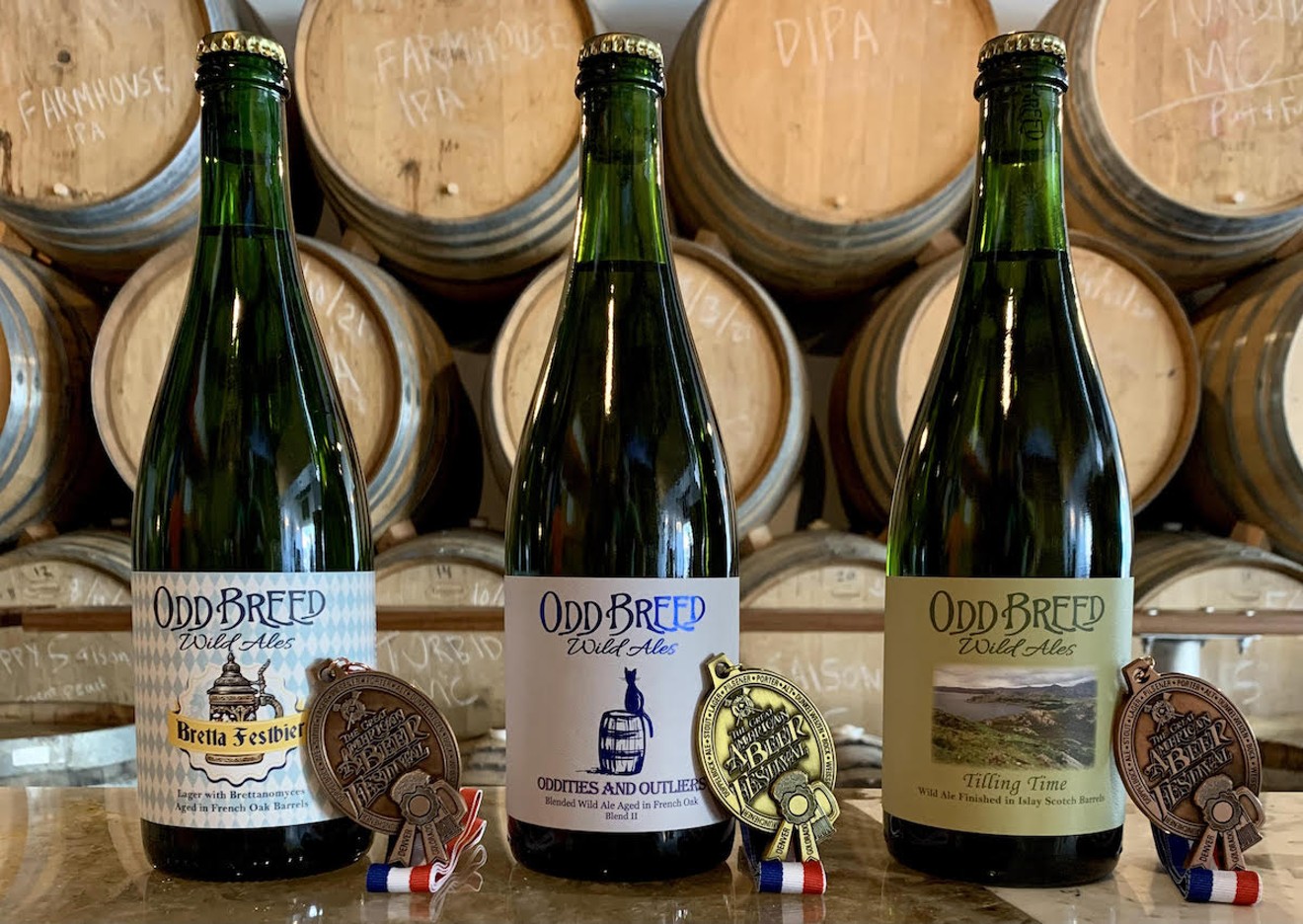 Odd Breed took home two medals during the 36th annual Great American Beer Festival (GABF) that took place in Denver this October, making it one of ten Florida breweries to receive a medal this year.

This year, Manthe’s "Bretta" festbier and "Tilling Time" Belgian-inspired lambic were recognized during the professional beer competition, each awarded a bronze medal during the official award ceremony that took place October 8 at the Colorado Convention Center.

The recognition comes on the heels of Odd Breed Wild Ales first GABF win, a gold medal the brewery received in the “mixed-culture brett beer” category for its "Oddities and Outliers Blend Two" beer, a blend of beers aged in French oak barrels for one to three years.

For Manthe, winning three medals in two years from the largest and most competitive beer competition in North America is an honor.

“I’m blown away," Manthe tells New Times. "When I first heard the news about the gold medal, I was sure someone had made a mistake. It’s so competitive, and there are so many breweries, I feel there’s always a bit of disbelief before it settles in.”

This year, Manthe said he streamed the award ceremony live while working the bar at his Pompano Beach taproom. When the first award was announced, he was excited to have a second win.

But he was floored when he heard the announcement for his third medal — this one for "Tilling Time" — announced just fifteen minutes later.

This year, Odd Breed again was recognized in the "brett beer" category for its “Bretta” festbier, which was brewed and fermented like a German Dortmunder pilsner before aging in French oak barrels with Brettanomyces wild yeast for 14 months. The wild lager showcases Odd Breed’s unique wild yeast strains with notes of hay, leather, and lemon rind alongside a hint of tartness.

In the “wood and barrel-aged sour beer” category, Manthe’s Belgian lambic “Tilling Time” was recognized as a standout. A unique twist on the classic style, the beer was aged for 16 months in French oak barrels before it was transferred into Islay Scotch barrels for an additional five months of aging, a process that yields intense aromatics of peat with notes of apricot, honeydew melon, and vanilla before finishing with refreshing acidity.

This weekend, those interested in sampling Odd Breed's award-winning beers can do so during the brewery's fifth-anniversary celebration taking place on Saturday, November 19.

The brewery will be open until 10 p.m., allowing guests to pay as they go or purchase an unlimited drink ticket via the Oznr app. Unlimited drink tickets are priced at $75 per person and include a 750-ml bottle of Odd Breed's "Fifth Anniversary" ale, a blend of five unique beers rested in French oak barrels from one to four years, as well as unlimited draft pours featuring a variety of Odd Breed’s recent and vintage beer lineup available from noon until 4 p.m.

When asked if there could be more award-winning beers in Odd Breed’s future, Manthe said he is up for the challenge.

“Winning two medals this year is a huge honor for our boutique, specialty brewery — especially after winning a gold medal last year,” sums up Manthe. “All of our beers demand an incredible amount of time and effort to produce, with extreme attention to detail, and I’m incredibly grateful that our local fans support us in our endeavor to create the best beer. As long as I feel I have something worthwhile to compete with, I’ll enter again."

Odd Breed Wild Ales Fifth Anniversary. Noon to 10 p.m. Saturday, November 19, at 50 NE First St., Pompano Beach; 754-220-6099; oddbreed.com. Admission is free; unlimited beer tickets cost $75 via shop.oznr.com.
KEEP MIAMI NEW TIMES FREE... Since we started Miami New Times, it has been defined as the free, independent voice of Miami, and we'd like to keep it that way. With local media under siege, it's more important than ever for us to rally support behind funding our local journalism. You can help by participating in our "I Support" program, allowing us to keep offering readers access to our incisive coverage of local news, food and culture with no paywalls.
Make a one-time donation today for as little as $1.