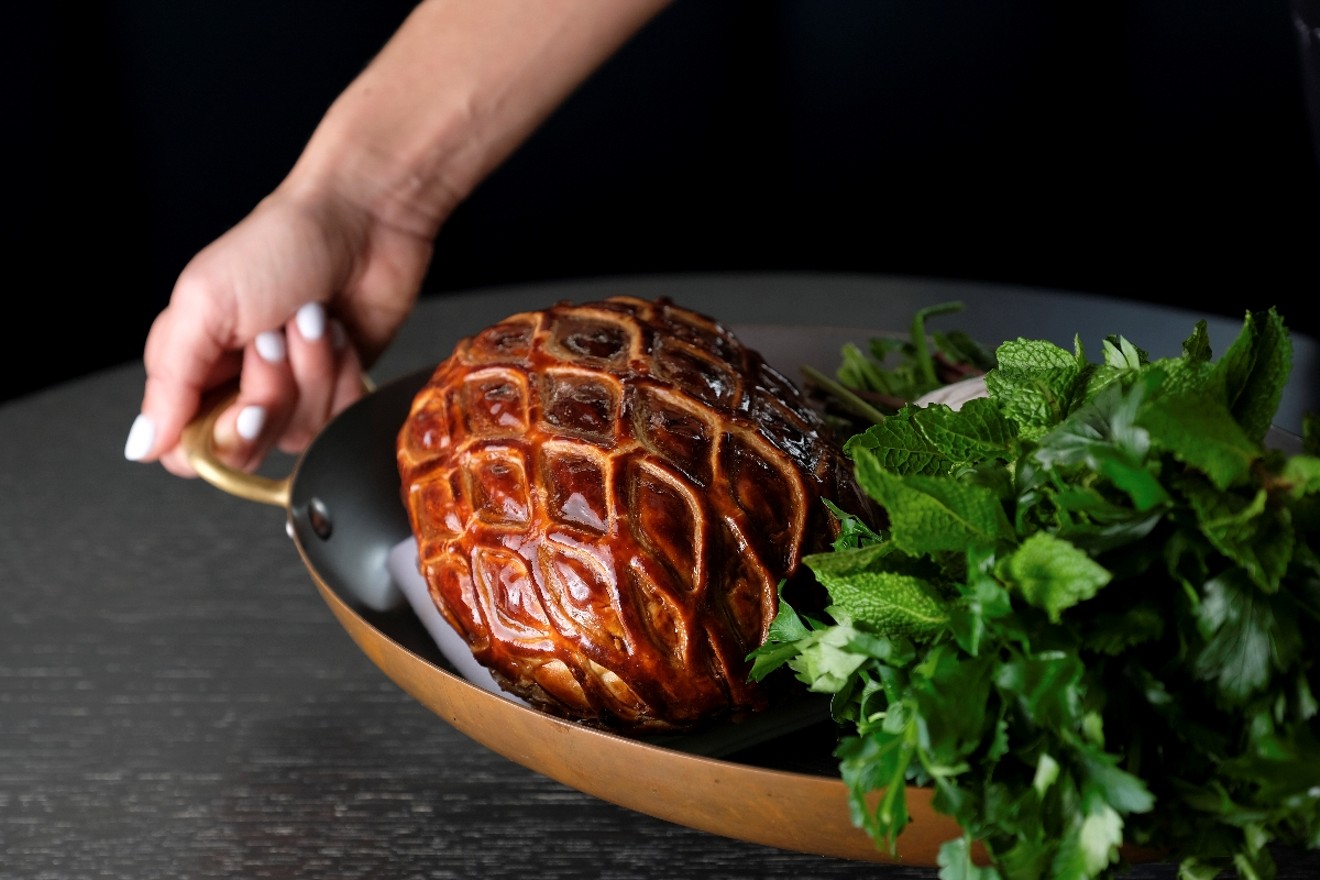 Beef Wellington at Brasserie Laurel Photo by Fujifilmgirl
Michael Beltran's restaurants are some of the finest in Miami, with Ariete receiving a Michelin star and his upscale Cuban diner, Chug's, receiving a Bib Gourmand. Navé, another of Beltran's restaurants, was included in the Michelin guide. Beltran recently opened the Gibson Room, a classic cocktail lounge on Coral Way.

Now, Beltran and his team are welcoming Brasserie Laurel into the fold. The restaurant opens at the new Miami Worldcenter development today, December 2. The restaurant will serve French fare, offering the same level of sophistication as his flagship, Ariete, in Coconut Grove.

Beltran tells New Times that he plans to put his mark on classic dishes. "We're going to use French food as a guideline and honor the traditions and technique. But, it's going to have our touch. I never consider myself in a box ever."

Beltran says that dishes like beef Wellington, frog legs, and crêpes Suzette will get a modern touch. "Yes, we are making French food and we are going to do it our way." The chef cites a classic foie gras dish as an example. "It's made with a local berry gastrique and pickled mulberries. It's a combination we haven't seen before, yet it's very French."

Brasserie Laurel's kitchen is helmed by executive chef Ashley Moncada, who has more than eight years of experience, most recently as chef de cuisine at Ariete. Beltran says her drive reminds him of himself when he was coming up as a chef. "She has an amazing attitude and wants to put out the best food. She's also a leader." Moncada, says Beltran, is more than a member of the staff; she's family, as are all of his team. "I think we are very tight because we want to put out great food and create a great culture."

Beltran is known for turning traditional dishes on their sides. At Ariete, the chef combines Cuban flavors with traditional French and American dining techniques. That strategy worked out well, earning the Coconut Grove restaurant a Michelin star. "Ariete's mission was to look at Cuban food through a different lens. Winning a star wasn't a goal, but it was the icing on the cake."

So, the question is, will Beltran's Ariete Hospitality Group seek out a star for Brasserie Laurel? "As a company, we work with a certain standard in mind, but we do this for more than just awards. We not only love our jobs, but we love this city very much. We have a great team that has worked very hard. If that gets them another star, I would love it for them and us."

Brasserie Laurel. 698 NE First Ave., Miami; brasserielaurel.com. Sunday through Thursday 5 to 10 p.m., and Friday and Saturday 5 to 11 p.m. (The bar stays open one hour later on all days).
KEEP MIAMI NEW TIMES FREE... Since we started Miami New Times, it has been defined as the free, independent voice of Miami, and we'd like to keep it that way. With local media under siege, it's more important than ever for us to rally support behind funding our local journalism. You can help by participating in our "I Support" program, allowing us to keep offering readers access to our incisive coverage of local news, food and culture with no paywalls.
Make a one-time donation today for as little as $1.