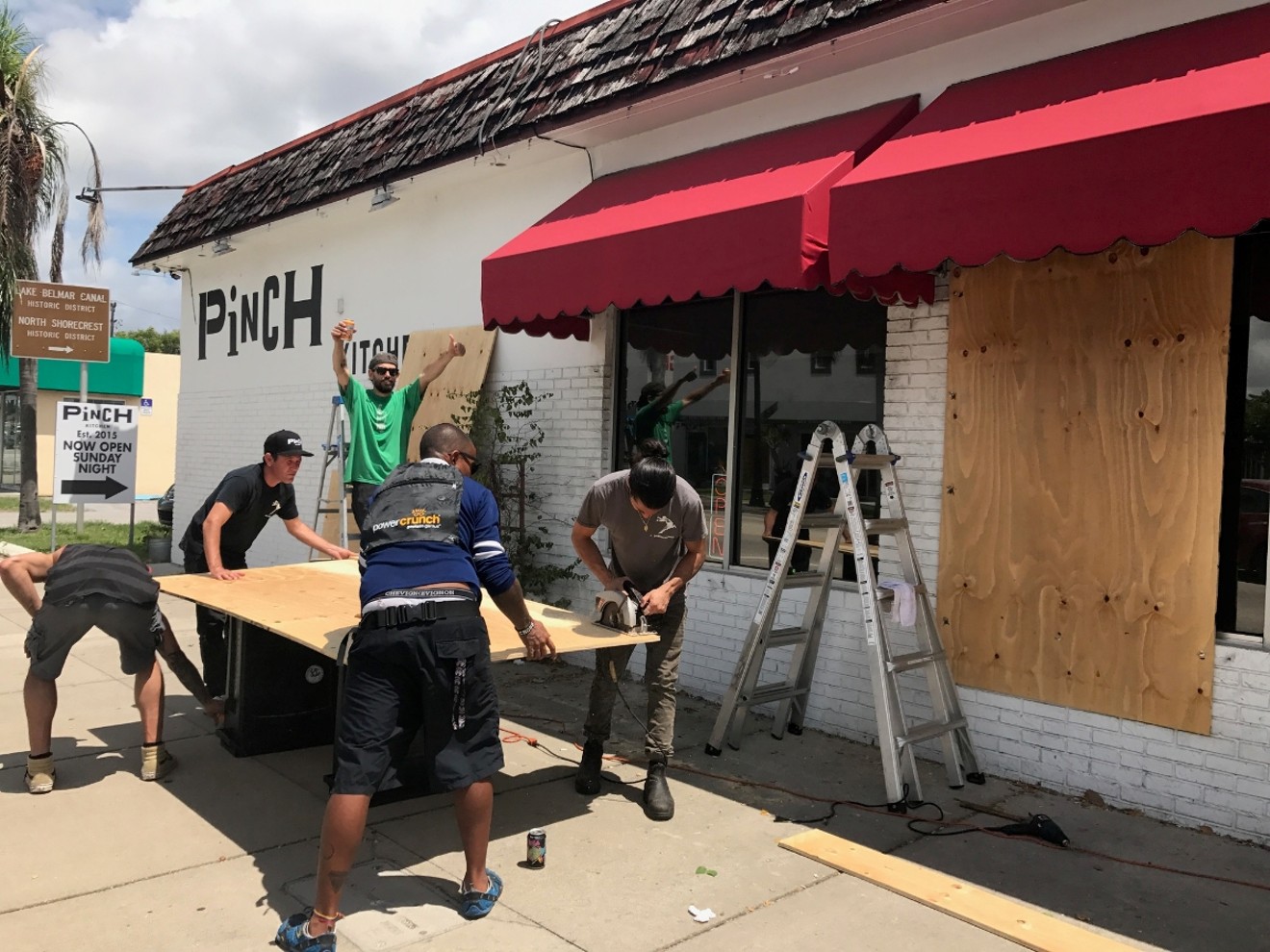 Pinch board up windows in anticipation of Hurricane Irma Laine Doss
With much across town shutting down as Hurricane Irma nears, chefs and restaurateurs are scrambling to batten the hatches and do everything they can to protect their spaces as a potentially lethal storm looms in the future.

Yet the main question is what to do with freezers and coolers stuffed with food worth thousands if not tens of thousands of dollars.

Nearby, Zak Stern's bakery has shuttered but only after multiple employees took home batches of the place's sourdough starter so as to ensure that if the bakery's supply gets blown out, hopefully the yeast will persevere and be ready to jump into action once the storm passes.

On the Upper Eastside, Pinch Kitchen's John Gallo and Rene Reyes were busy putting up plywood to prepare for the storm. The restaurant serves Natural Wines, which are highly perishable and require refrigeration.The partners are selling them at 20% to 50% off while the restaurant remains open.

Richard Hales plans to make a bunch of the Nashville hot chicken he serves at Bird & Bone. "I love to eat it cold and turn it into hot chicken salad sandwiches on soft wonder bread or saltines". The Miami Beach restaurant is in an evacuation zone, but will remain partially operational to service stranded guests.

Meat Market's Sean Brasel dehydrates meats as a way to preserve some of his product and prepare for the hurricane using nitrates and a dehydrator. The chef says that home enthusiasts can follow a simple jerky recipe to preserve and prepare the meat stored in your fridge or freezer. Vegetables can also be dehydrated, according to Brasel. "Veggies can be dried out in an oven or warming drawer, either raw or slightly blanched in light salt water. They are best dried at 140 degrees for 12 to 24 hours. Tomatoes work best cut in half."

Of course, hopefully most places have donated or cooked off what they can for themselves or the needy. One of the great, unseen tragedies that followed Hurricane Wilma in 2005 was the countless thousands of pounds of food that rotted after restaurants lost power. I at the time was working in a Palm Beach County Ruth's Chris and shortly after clouds cleared, was summoned to begin clearing thousands of pounds of rancid, oxidizing meat out of a reeking walk-in fridge. With such a squeeze about to be put on resources, hopefully many places are following Dizengoff's lead.